The book that put Nat Turner on the cover of Newsweek magazine in the autumn of 1967 had its origins in the oral and written traditions of Tidewater Virginia. Styron traced his interest in the subject of slavery to the stories his grandmother—who had owned slaves—told him as a child growing up in Newport News. He first read about Nat Turner in a grammar school textbook in the mid-1930s. After reading the original “Confessions” late in the 1940s, Styron began to consider the possibilities of a novel. He gathered source materials and pitched the idea to his editor early in the 1950s. He started writing (and even drafted an outline for an original Hollywood screenplay) early in the 1960s. By the time The Confessions of Nat Turner appeared in 1967, Styron had published several nonfiction articles on slavery, slave revolts, and the enigmatic figure of Nat Turner.

Styron was born into a social and cultural milieu that would mark him as a southerner for life. Yet he left Virginia as a young writer late in the 1940s, never to make his home in the South again. His identification with his native state was that of an expatriate, appalled by the politics of the Byrd Organization and the provincialism of the so-called First Families of Virginia. When he reached adulthood, his values were shaped by a more or less rootless community of intellectuals—writers, editors, and historians—who viewed the South as a microcosm of the United States, a bastion of racial prejudice and simmering class conflict. Styron befriended other southern exiles—the novelist Robert Penn Warren, the historian C. Vann Woodward, and the essayist Willie Morris—who felt “the burden of Southern history” and sought to interpret its significance for the nation at large. They spoke with the authority of native white southerners who had rebelled against the folkways of the region and embraced the insights of moral philosophers and modern science. 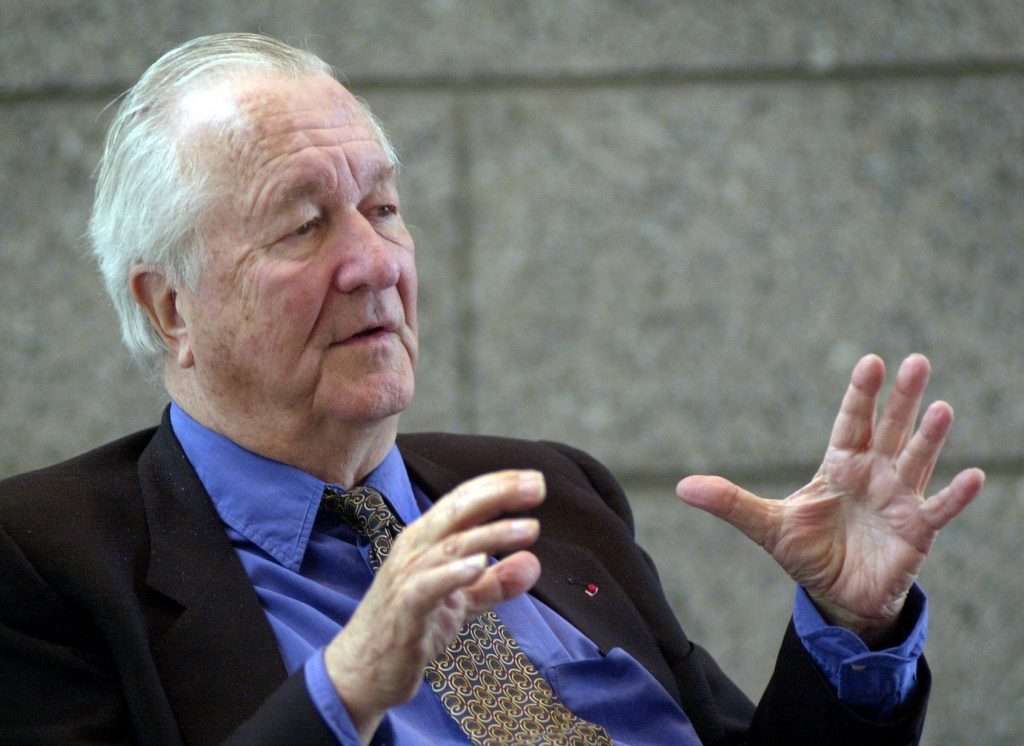 Styron tells his version of the confessions in the voice of Turner, who, at the novel’s beginning, is lying in a heap of “waste and shame and exhaustion” in a jail cell in Jerusalem, the seat of Southampton County. Turner describes smelling the lawyer Thomas R. Gray before he saw him: “Suddenly the cold dawn was a May morning, rank with the odor of apple blossoms, his sweet fragrance preceding him as he approached the cell.” After describing the various negotiations that result in his confession, Turner picks up the story of his life, often moving backward and forward in time. In a style that is often floridly literary and punctuated by biblical references, Turner tells of witnessing his mother’s rape and of seeing fellow slaves forced to fight one another nearly to death. He explains the remarkable circumstances of his own education, as well as his religious and sexual awakenings (the latter involving a white woman whom he later murders) and the deep anger, guilt, and even, to some extent, cowardice that marked his revolt.

Everywhere Styron is acutely sensitive to language and the complications of even basic communications. Turner’s voice is modern and sophisticated in exposition, but when he speaks, he sounds like a caricature of a slave. In one memorable episode, Turner tells of how a year before the revolt, he and his friend Hark encountered Jeremiah Cobb, who would later be the judge who sentences them both to death. Turner upbraids Hark for his “bootlickin'” deference (“You ain’t a man when you act like that. You ain’t a man, you is a fool!”) while, at the same time, finding it equally disturbing that Cobb is almost friendly with them. The judge’s tone is ambiguous enough that it creates for Turner and Hark a life-or-death dilemma—to respond to his friendliness only to find that they have misinterpreted him could invite severe punishment. 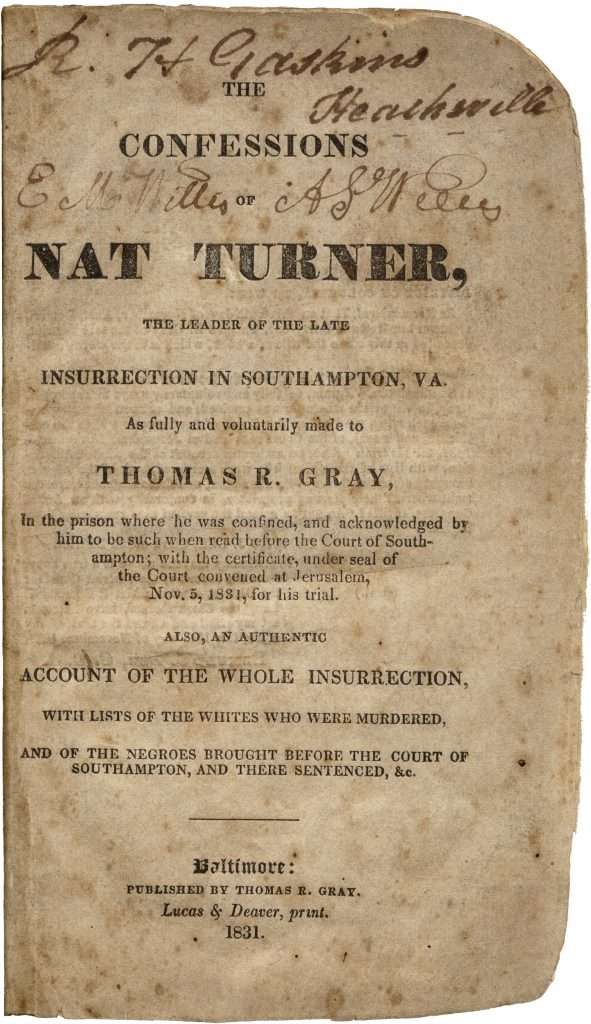 The Confessions of Nat Turner, the Leader of the Late Insurrection in Southampton, Va.

Styron’s evolving depiction of Nat Turner as a tragic figure reflected his own ambivalence, as a white liberal, toward the black revolutionary violence of the mid-1960s. In reading Turner’s “Confessions,” he noticed that the rebellion seemed to collapse after the rebel leader committed his first and only murder. “To my mind,” he explained in a 1963 Esquire magazine interview, “it was his dealing with violence that led him into a hopeless trap. He found out that he couldn’t deal with the violence that he himself had ordained.” Styron described this theme as “very central” to his book—”the idea of what happens when a man boldly proposes a course of total annihilation and starts to carry it out and finds to his dismay it’s not working for him.” Likewise, in “This Quiet Dust,” an essay published in the April 1965 issue of Harper’s, Styron describes visiting the ruins of a home in which Nat Turner had chased down eighteen-year-old Margaret Whitehead and killed her. In the stillness of the rotting house, Styron ruminated on the significance of this “apocalyptic” scene, so briefly recounted in the Turner’s “Confessions.” “What happened to Nat in this place?” Styron asked. “Did he discover his humanity here, or lose it?”

Styron—who proclaimed his fidelity to the historical record of the event while insisting on his right, as an artist, to explore the undocumented moral universe of the rebellious slave—made the imagined relationship between Turner and Whitehead a focal point of his novel. Absent any evidence to the contrary, he imagined a sexually charged relationship between them. Styron inferred the relationship from the fact, documented in the original 1831 “Confessions,” that Whitehead was the only one of the fifty-five white victims whom Turner killed with his own hands. “How come you only slew one?” Styron’s Thomas Gray asks Turner. “How come, of all them people, this here particular young girl?” Styron also took liberties in his characterization of slaveholders identified as owners and intended victims of the rebellious slaves. Styron made no pretense of literal accuracy in concocting these scenes; his self-styled “meditation on history” required only that the novel remain faithful to larger “truths.”

For months after the publication of his book, Styron rode a wave of critical acclaim and commercial success that placed him in the top rank of American novelists. Historians, literary critics, and book reviewers, writing in newspapers and magazines across the country, hailed the book as a milestone in the literature of American race relations. They applauded Styron for transcending his identity as a white southerner and creating an authentic, historically accurate portrayal of American slavery from “inside the mind” of a slave. Most found the book a revelation, a work of art that told the truth about slavery and its degradation of whites and blacks alike, a work of history that would help Americans understand the roots of their contemporary racial problems. 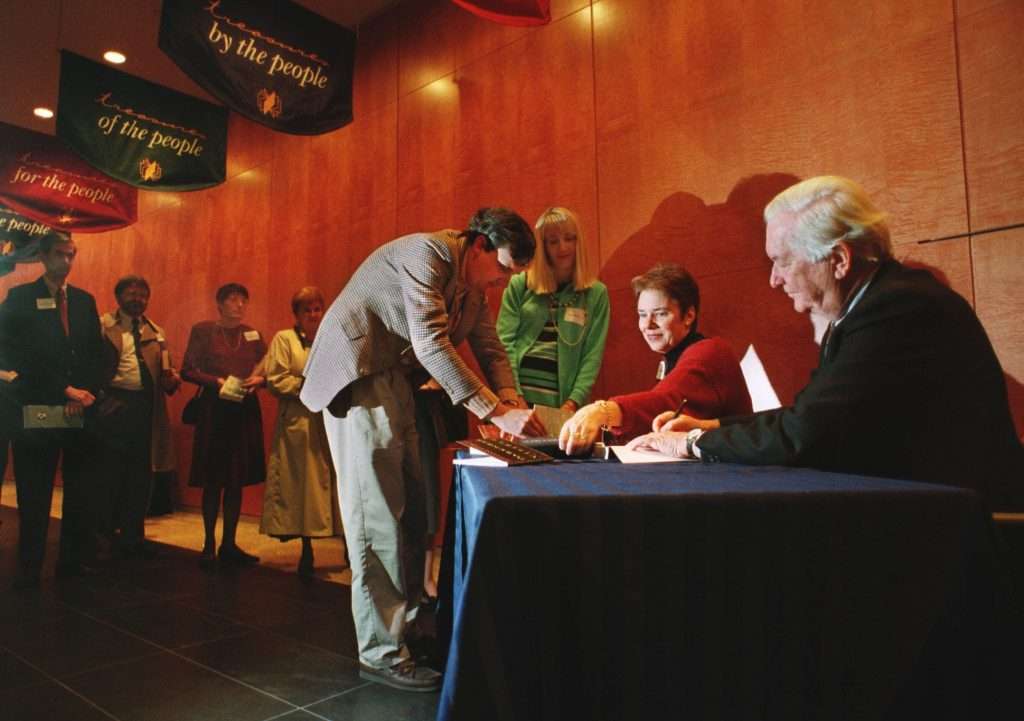 Signs of a growing “black backlash” against Styron’s Confessions began to appear late in November and early in December 1967, after the book had been favorably reviewed in many national publications. Some black critics expressed disappointment with Styron’s “failure of sensibility” as a writer; others called him an unreconstructed white southern racist. Still others directed their anger at the “white-controlled” mass media for relying on a white man to interpret the experience of black people. All agreed that the overwhelmingly positive response to the book in the national press demonstrated a blatant disregard for the opinions, recorded history, and folk traditions of blacks. The radical black critique of Styron’s book culminated in the publication of William Styron’s Nat Turner: Ten Black Writers Respond (1968), whose contributors spoke for a “black intellectual community” united in protest against the bestselling novel and its uncritical reception by white historians, white literary critics, and the white-controlled news media. The black backlash against the novel, widely covered in the press, overshadowed the protests of white southern partisans who complained that Styron had defamed their ancestors and distorted their history. Ironically, Styron’s efforts to create a common history, merging the perspectives of slave and slaveholder, satisfied the descendants of neither.

The response to Styron’s book reflected a broader struggle for community control over images and perceptions of the American past. Who has the authority to decide which interpretations of history are fit for mass consumption and which are not? Should that authority rest with an intellectual community of academics, journalists, literary critics, and artists whose views find a ready outlet in the national news media? Or should that authority rest with those who lay claim to a distinctive past and demand the right to interpret it for themselves?

RELATED CONTENT
Categories:
Related SOLs:
MAP
TIMELINE
August 30, 1800
A planned slave revolt led by a blacksmith named Gabriel (owned by Thomas Prosser, of Henrico County) is thwarted when a huge storm delays the meeting of the conspirators and a few nervous slaves reveal the plot to their masters.
August 21—22, 1831
Nat Turner, a slave preacher and self-styled prophet, leads the deadliest slave revolt in Virginia's history, which in just twelve hours leaves fifty-five white people dead in Southampton County.
November 1, 1831
The lawyer Thomas R. Gray meets with Nat Turner, accused of leading a slave revolt, in the Southampton County jail.
November 5, 1831
Nat Turner is convicted and sentenced to death for leading a revolt of enslaved people.
November 10, 1831
Thomas R. Gray secures a copyright for his pamphlet The Confessions of Nat Turner, as fully and voluntarily made to Thomas R. Gray. Gray's account purports to tell the story of Nat Turner's slave uprising in the words of Turner himself.
November 11, 1831
Nat Turner is hanged.
September 1967
The Confessions of Nat Turner, by Virginia-native William Styron, is published at the height of the Black Power movement. The novel wins the Pulitzer Prize in 1968.
1968
William Styron's Nat Turner: Ten Black Writers Respond is published. The contributors speak for a "black intellectual community" united in protest against the best-selling novel and its reception by white historians, white literary critics, and the white-controlled news media.
FURTHER READING
CITE THIS ENTRY