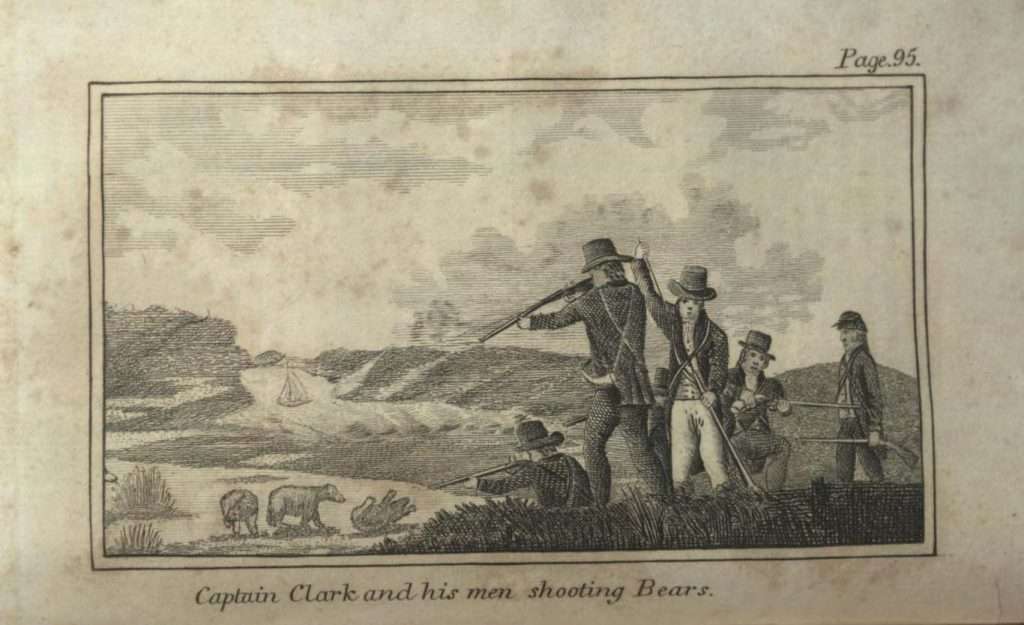 Clark was the son of John Clark and Ann Rogers Clark. He was born on November 19, 1752, near Charlottesville in Albemarle County and grew up on the family’s small farm in Caroline County. Little is known about his early life or education, but in the 1760s he may have briefly attended Donald Robertson’s well-known school in King and Queen County. Clark was not studious, but he possessed an aptitude for mathematics and by age nineteen had become a surveyor. He developed an interest in history, geography, and natural phenomena and acquired a large library. He never married. His much younger brother William Clark was also born in Virginia but lived his eventful life in the West, where he became governor of the Missouri Territory after he and Meriwether Lewis led a successful expedition of discovery across North America. 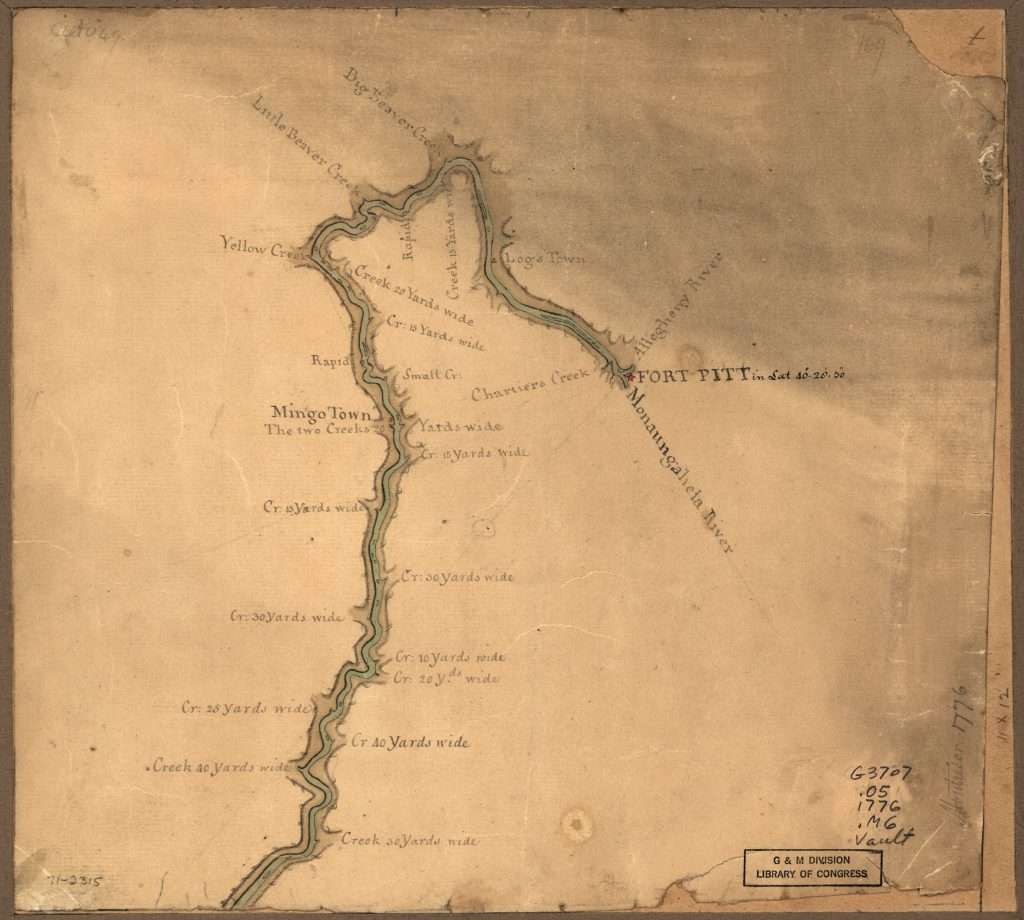 Map of the Ohio River from Fort Pitt

Between the summer of 1772 and the spring of 1774 Clark explored the upper Ohio River Valley and claimed land about 130 miles downriver from Fort Pitt. The plans in which he participated to establish a settlement in Kentucky were delayed when fighting broke out between settlers and western Indian tribes. On May 2, 1774, Clark became a militia captain and in October of that year took part in the campaign that defeated Cornstalk at Point Pleasant. By the treaty that terminated Dunmore’s War the Indians relinquished hunting grounds south of the Ohio River, thus leaving Kentucky open to settlement. The following spring Clark joined other surveyors working for the Ohio Company of Virginia, one of several competing western land companies that claimed rights to Kentucky land. Chief among its rivals was the Transylvania Company of Richard Henderson, of North Carolina. In June 1776 Clark was one of two men whom western settlers elected to represent them in the last of the Revolutionary Conventions then meeting in Williamsburg, but the convention adjourned long before they reached the capital. The district had not been authorized to elect representatives, and in October the House of Delegates declined to seat them, but the General Assembly created Kentucky County and thus scotched Henderson’s proposed western colony. 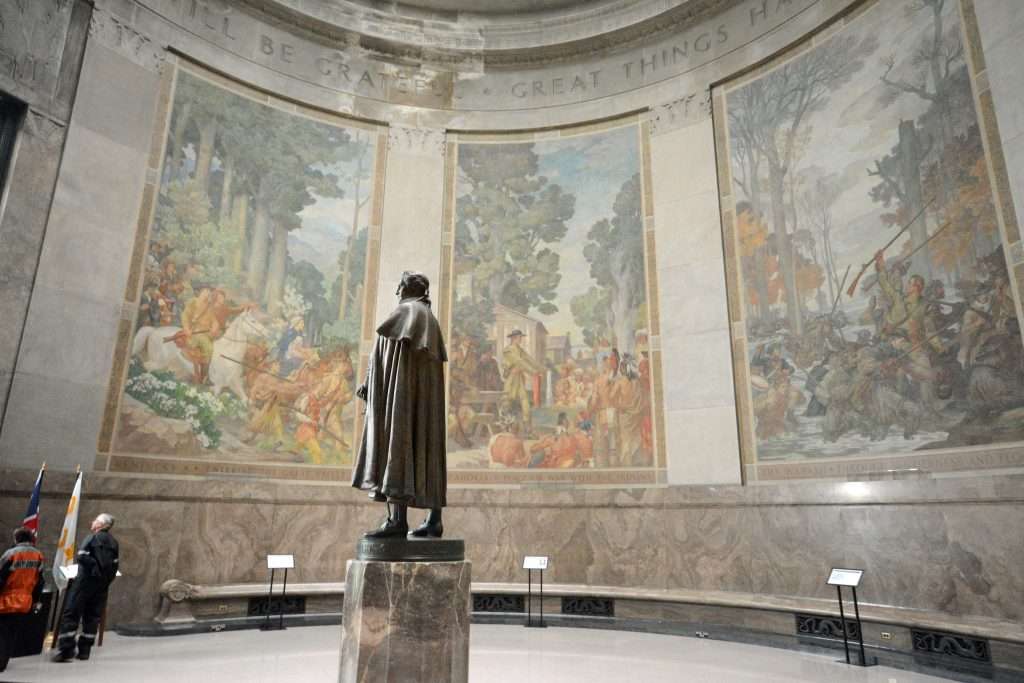 During the winter of 1776–1777 Clark returned to Kentucky with a supply of gunpowder and a major’s commission, which made him the ranking militia officer of the new county. Seeking to curb enemy Indian raids by striking at British-controlled outposts in the West, he dispatched spies to Vincennes and Kaskaskia, on the Mississippi River, and prepared a report for Virginia’s governor. In December 1777, with the governor’s cooperation, the assembly provided resources for a western expedition but carefully concealed Clark’s plans. Clark, in Williamsburg at the time, was promoted to lieutenant colonel and on January 2, 1778, received the governor’s confidential orders to organize the expedition.

Operating in secrecy made recruiting difficult, and when Clark’s flatboats departed down the Ohio River on May 12, 1778, only about 150 men were on board. His Illinois Regiment, augmented to about 175 men by the latter part of June, began the 120-mile march to Kaskaskia, where on July 4 they slipped across the river, broke into the fort, and seized the commander. After reassuring the French inhabitants of their safety and securing their loyalty, Clark dispatched troops to occupy Cahokia and Vincennes and by July 20 had secured their allegiance as well. He also established cordial relations with Spanish officials at Saint Louis, who offered him military aid. Clark’s dramatic expedition reinforced Virginia’s claim, and hence the claim of the United States, to the region north of the Ohio River. 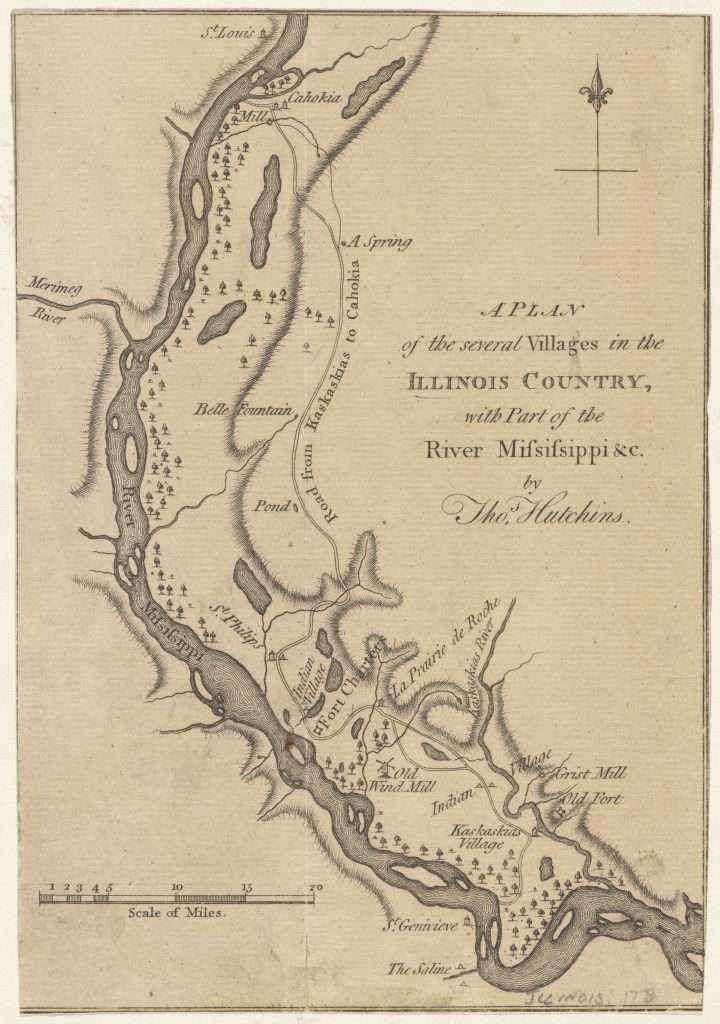 A Plan of the Several Villages in the Illinois Country, with Part of the River Mississippi &c.

The British reacted quickly. On December 17, 1778, a British force seized the fort at Vincennes. Clark counterattacked two months later with a force estimated at from 127 to 200 men. They marched 180 miles to Vincennes under exceptionally harsh winter conditions, forded a flooded plain five miles wide, with shallows three feet deep, and seized Fort Sackville on February 25, 1779. Following Clark’s daring victory the General Assembly created Illinois County north of the Ohio River and east of the Mississippi.

Clark repeatedly planned to attack the British at Detroit, but even with the support of Virginia’s governor he had too few men and supplies and had to postpone planned expeditions in 1779 and 1780. Instead, he defended against British attempts to recapture the Illinois country. The British made wide-ranging raids on key American positions and, after Spain declared war on Great Britain, attacked outposts at Saint Louis and elsewhere. Clark quickly moved to repulse British forces and led a punishing campaign against the Shawnee at Chillicothe. He became a brigadier general of Virginia troops on January 22, 1781, but was still not able to recruit and equip a force adequate to attack Detroit. As he wrote later that year, “I have lost the object that was one of the principal inducements to my fatigues & transactions for several years past—my chain appears to have run out.”

Fighting in the East largely ceased late in 1781, but military disasters in the West in 1782 so demoralized Kentuckians that Clark undertook a retaliatory expedition, in part at his own expense, and destroyed six Shawnee towns. His militia commission was rescinded after the signing of the Treaty of Paris in 1783, but the treaty acknowledged American ownership of the vast region north of the Ohio River and east of the Mississippi River. The Northwest Territory, as it came to be known, belonged to the United States by virtue of Clark’s military leadership. 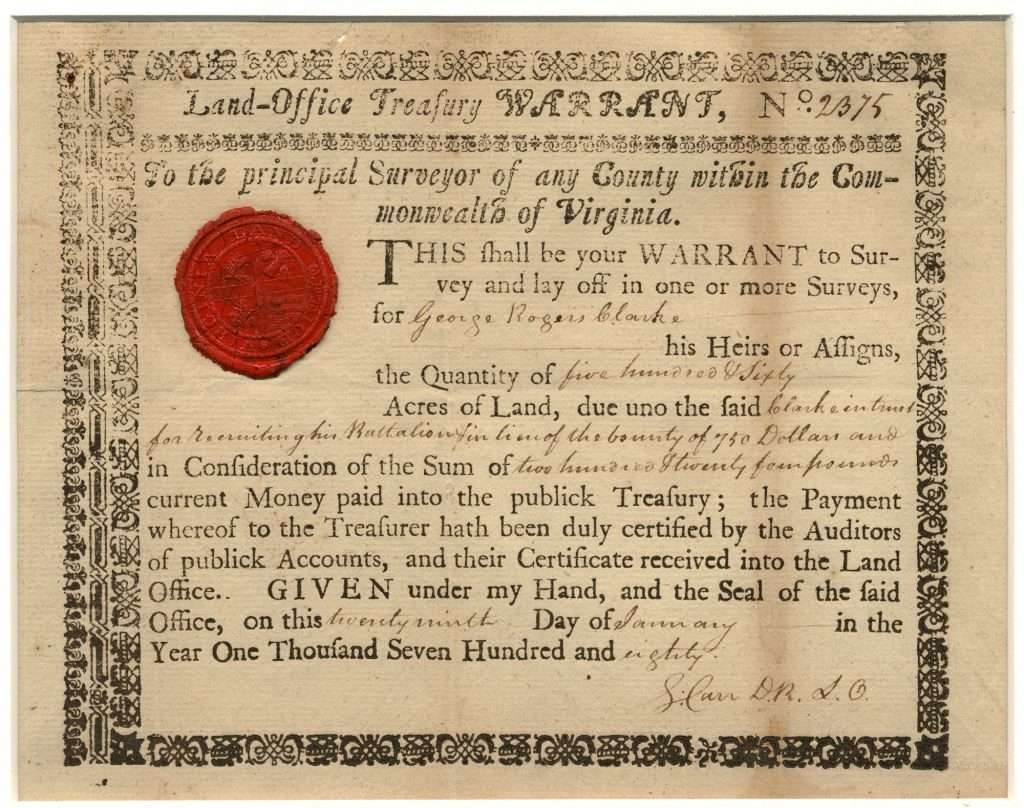 Clark spent much of the remainder of his life attempting to put his military accounts in order and to secure compensation for expenses he had incurred or money that he had paid out of his own pocket. Virginia owed him nearly £3,400 in back pay and out-of-pocket expenses, which was to be paid with military certificates and warrants instead of cash, but he was held liable for unpaid wartime debts made in the state’s name. Auditors in Richmond lost many of his vouchers, which complicated his personal finances for years. Several thousand of his unpaid vouchers were discovered in the State Capitol in 1913.

In 1783 Clark was named a trustee for Transylvania Seminary (later part of Transylvania University) and was certified as a surveyor by the College of William and Mary. The following year he became the principal surveyor of bounty lands that the state had set aside to compensate Virginia officers and soldiers. Clark also served on a board that supervised the distribution of lands in the Illinois grant. After Virginia ceded to the United States its claim to the Northwest Territory in March 1784, Congress appointed him one of the commissioners to manage negotiations with the Indians. He was present at Fort Macintosh in January 1785 when the tribes signed over most of their lands north of the Ohio River, and a year later he concluded a treaty with the Shawnee that granted the United States sovereignty over all lands ceded by Great Britain. Despite rumors of excessive drinking, Clark in 1786 was chosen to lead an expedition against the Wabash Indians. His inadequately supplied troops mutinied, and he returned to Vincennes, where he established a garrison outfitted with provisions seized from Spanish merchants. The United States and Spain were then locked in a dispute about use of the Mississippi River, and Clark’s enemies used this incident against him. Accused of drunkenness, he found himself repudiated by the state government and his reputation in tatters. Believing that the facts spoke for themselves, Clark declined to defend himself. He lived with his father in Louisville, where he devoted much of his time to writing his memoirs. 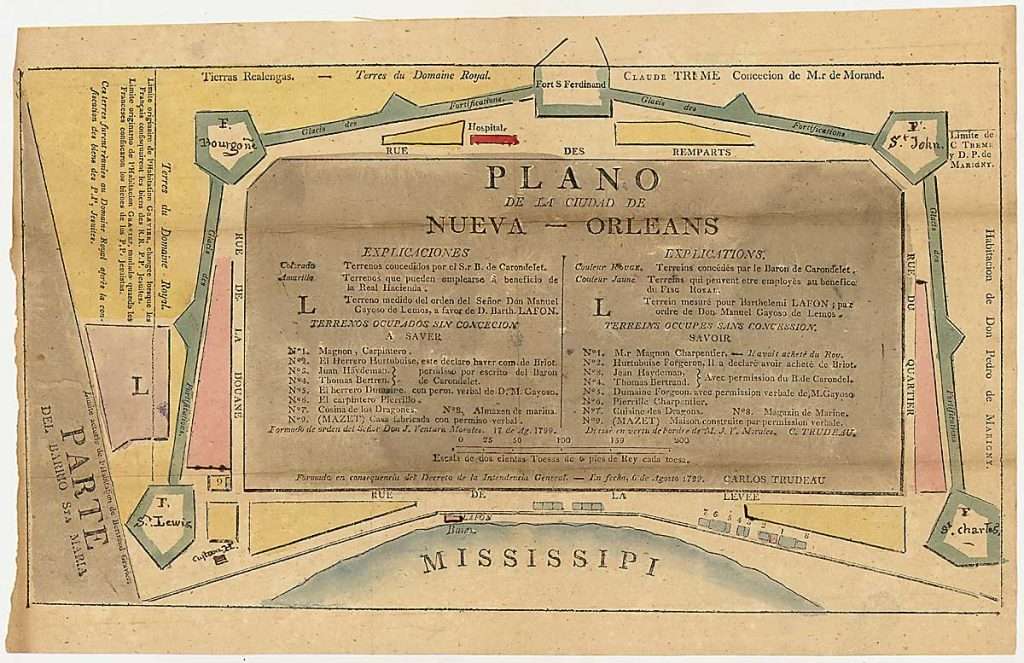 Virginia still owed Clark nearly $12,000. He was not able to sell the large tracts of land that he owned in the West, and in 1791 the assembly rejected his claim for reimbursement for money that he had borrowed on his own credit and spent during the war in support of his military operations. To Spanish officials he offered his services in founding a colony in the Mississippi Valley, but unable to agree on conditions, he became involved in an abortive attempt to establish an independent colony between the American and Spanish settlements. In 1792 Clark proposed to help France wrest Louisiana from Spain and received a military commission. During a visit to Philadelphia in 1798 he was threatened with arrest and warned to resign as brigadier general in the French army or give up his American citizenship. He eventually escaped to Saint Louis. 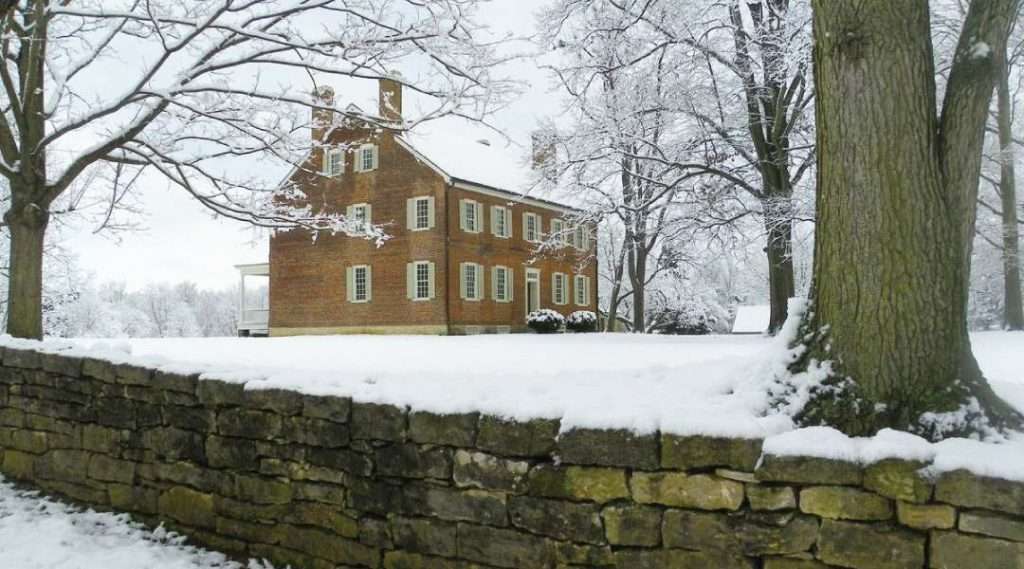 In 1799 Clark returned to Louisville, where he depended on one of his brothers for support. He moved to a small cabin across the Ohio River from Louisville in 1803 and ran a gristmill. Impoverished and increasingly frail, he unsuccessfully petitioned Congress for financial relief. Clark had a stroke in 1809 and, after his infected right leg was amputated, lived with a sister at nearby Locust Grove, in Jefferson County, Kentucky. In 1812 the Virginia General Assembly finally granted him an annual pension of $400 and awarded him a sword. George Rogers Clark suffered a debilitating stroke the next year and died at Locust Grove on February 13, 1818, following another stroke. He was buried at Locust Grove, but in 1869 his remains were moved to Cave Hill Cemetery, later renamed Cave Hill National Cemetery, in Louisville. The George Rogers Clark National Historical Park, established in 1966 in Vincennes, Indiana, commemorates Clark’s capture of Fort Sackville in 1779.