The first camp, Camp Roosevelt, was set up at Luray in the George Washington National Forest in 1933. In its nine years of work, the CCC spent $109 million in Virginia, the fifth-largest state expenditure in the country. The state ranked fourth in the number of camps (more than eighty, twelve of which were for black Virginians) and seventeenth in the total number of enrollees. The CCC employed 107,210 men statewide, 64,762 of whom were Virginia youth and 10,435 of whom were local camp officers and supervisors. The agency put most of its effort into controlling erosion and flooding and improving forest landscaping and wildlife conditions. Its contributions in Virginia were significant: 15.2 million trees planted in reforestation and erosion control, 986 bridges constructed, fire hazards reduced over 152,000 acres, 2,128 miles of new telephone line strung, and 1.3 million fish stocked. The conservationists also worked on the restoration of historical sites at Jamestown, Williamsburg, Yorktown, Fredericksburg, and Spotsylvania and combated floods along the James and Potomac rivers. 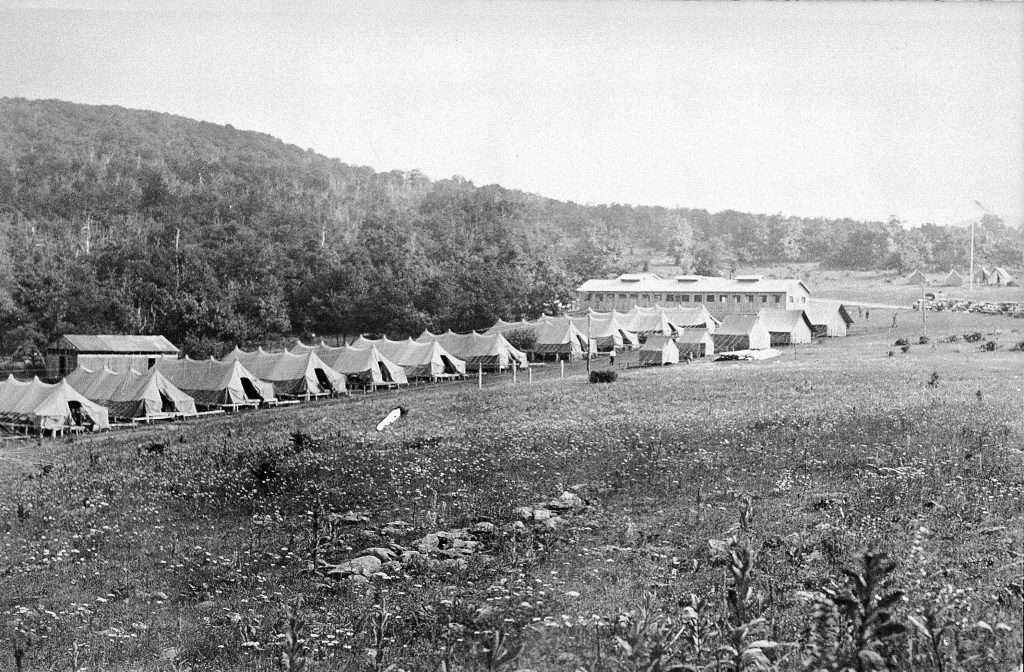 The development of a state park system was the most important legacy of the CCC in Virginia, which before 1933 had had no state parks. Providing labor and materials, the CCC created a $5 million system that cost Virginia only $100,000—”the biggest bargain of the New Deal.” On June 15, 1936, six state parks—Westmoreland in Westmoreland County, Seashore (later First Landing State Park) in Princess Anne County, Fairy Stone in Patrick County, Staunton River in Halifax County, Douthat in Bath and Alleghany counties, and Hungry Mother in Smyth County west of Marion—were opened. CCC workers also labored on the federal projects of the Shenandoah National Park, the Skyline Drive, and the Blue Ridge Parkway.

President Roosevelt Visits CCC at Shenandoah
The war and dwindling unemployment caused the termination of the CCC in 1942. The final Virginia report summarized its work: “In no State did the CCC make a greater or more lasting contribution to the well-being of its citizens than it did in Virginia.”
RELATED CONTENT
Categories:
Related SOLs:
MAP
TIMELINE
April 17, 1933
The first Civilian Conservation Corps work camp is established in Luray.
June 15, 1936
Virginia's state parks system launches when the six inaugural parks—Douthat, Fairy Stone, Hungry Mother, Seashore, Westmoreland, and Staunton River—open simultaneously. All of the parks are products of the workers employed by President Franklin D. Roosevelt's Civilian Conservation Corps.
1942
The beginning of World War II along with dwindling unemployment cause the termination of of the Civilian Conservation Corps.
FURTHER READING
CITE THIS ENTRY