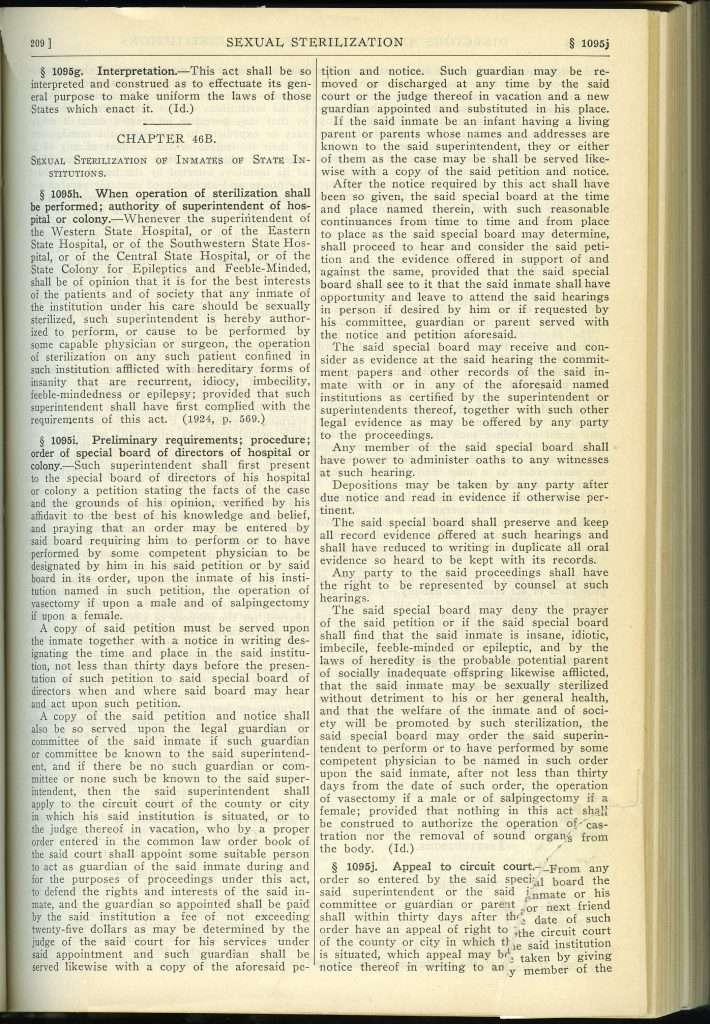 CHAPTER 46B.
Sexual Sterilization of Inmates of State Institutions.

§ 1095i. Preliminary requirements; procedure; order of special board of directors of hospital or colony.—Such superintendent shall be first present to the special board of directors of his hospital or colony a petition stating the facts of the case and the grounds of his opinion, verified by his affidavit to the best of his knowledge and belief, and praying that an order may be entered by said board requiring him to perform or to have performed by some competent physician to be designated by him in his said petition or by said board in its order, upon the inmate of his institution named in such petition, the operation of vasectomy if upon a male and of salpingectomy if upon a female.

A copy of said petition must be served upon the inmate together with a notice in writing designating the time and place in the said institution, not less than thirty days before the presentation of such petition to said special board of directors when and where said board may hear and act upon such petitions.

If the said inmate be an infant having a living parent or parents whose names and addresses are known to the said superintendent, they or either of them as the case may be shall be served likewise with a copy of the said petition and notice.

The said special board may receive and consider as evidence at the said hearing the commitment papers and other records of the said inmate with or in any of the aforesaid named institutions as certified by the superintendent or superintendents thereof, together with such other legal evidence as may be offered by any party to the proceedings.

Any member of the said special board shall have power to administer oaths to any witnesses at such hearing.

Depositions may be taken by any party after due notice and read in evidence if otherwise pertinent.

The said special board shall preserve and keep all record evidence offered at such hearings and shall have reduced to writing in duplicate all oral evidence so heard to be kept with its records.

Any party to the said proceedings shall have the right to be represented by counsel at such hearings.

The said special board may deny the prayer of the said petition or if the said special board shall find that the said inmate is insane, idiotic, imbecile, feeble-minded or epileptic, and by the laws of heredity is the probable potential parent of socially inadequate offspring likewise afflicted, that the said inmate may be sexually sterilized without detriment to his or her general health, and that the welfare of the inmate and of society will be promoted by such sterilization, the said special board may order the said superintendent to perform or to have performed by some competent physician to be named in such order upon the said inmate, after not less than thirty days from the date of such order, the operation of vasectomy if a male or of salpingectomy if a female; provided that nothing in this act shall be construed to authorize the operation of castration nor the removal of sound organs from the body. (Id.)

§ 1095j. Appeal to circuit court.—From any order so entered by the said special board the said superintendent or the said inmate or his committee or guardian or parent or next friend shall within thirty days after the date of such order have an appeal of right to the circuit court of the county or city in which the said institution is situated, which appeal may be taken by giving notice thereof in writing to any member of the 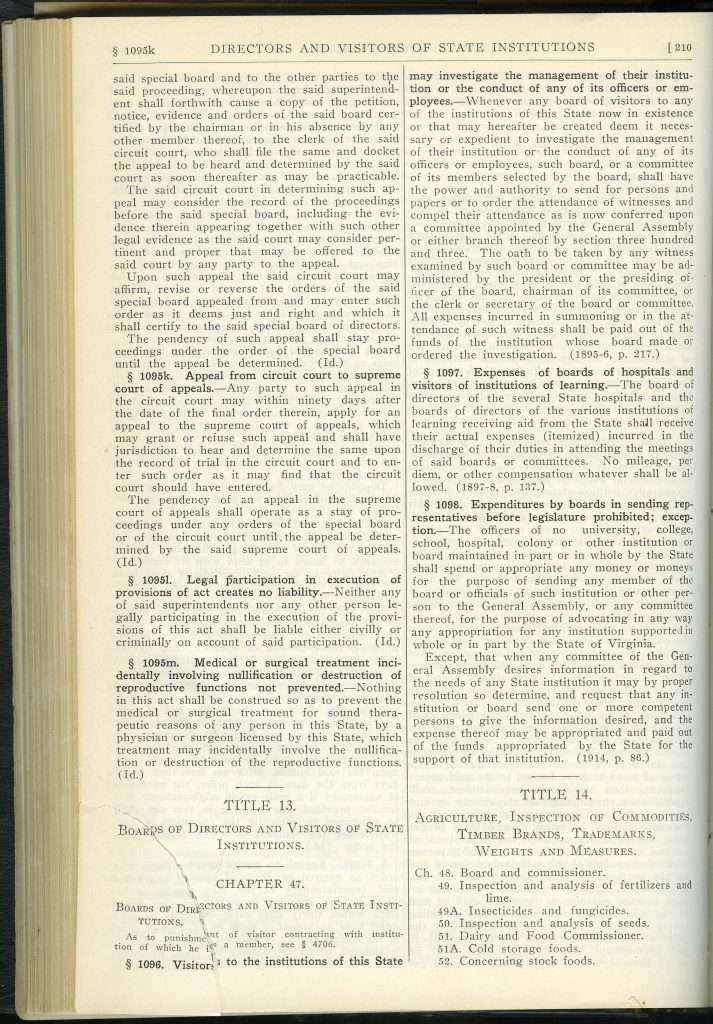 said special board and to the other parties to the said proceeding, whereupon the said superintendent shall forthwith cause a copy of the petition, notice, evidence and orders of the said board certified by the chairman or in his absence by any other member thereof, to the clerk of the said circuit court, who shall file the same and docket the appeal to be heard and determined by the said court as soon thereafter as may be practicable.

The pendency of such appeal shall stay proceedings under the order of the special board until the appeal be determined. (Id.)

§ 1095m. Medical or surgical treatment incidentally involving nullification or destruction of reproductive functions not prevented.—Nothing in this act shall be construed so as to prevent the medical or surgical treatment for sound therapeutic reasons of any person in this State, by a physician or surgeon licensed by this State, which treatment may incidentally involve the nullification or destruction of the reproductive functions. (Id.)