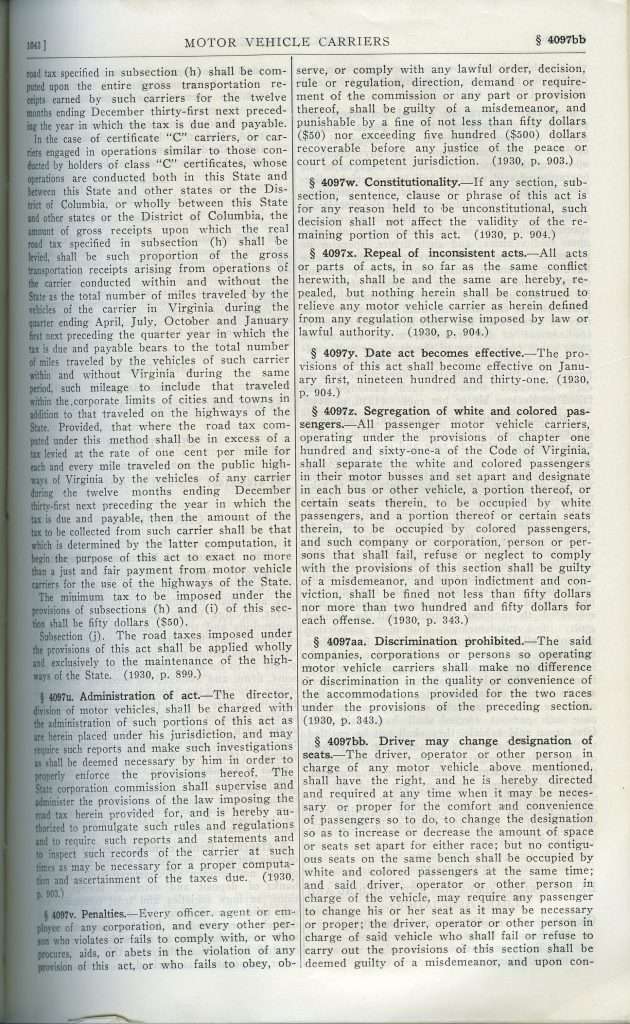 §4097z. Segregation of white and colored passengers.— All passenger motor vehicle carriers, operating under the provisions of chapter one hundred and sixty-one-a of the Code of Virginia, shall separate white and colored passengers in their motor buses and set apart and designate in each bus or other vehicle, a portion thereof, or certain seats therein, to be occupied by colored passengers, and such company or corporation, person or persons that shall fail, refuse or neglect to comply with the provisions of this section shall be guilty of a misdemeanor, and upon indictment and conviction, shall be fined not less than fifty dollars nor more than two hundred and fifty dollars for each offense. (1930, p. 343.)

§ 4097aa. Discrimination prohibited.—The said companies, corporations or persons so operating motor vehicle carriers shall make no difference or discrimination in the quality or convenience of the accommodations provided for the two races under the provisions of the preceding section. (1930, p. 343.)

§4097bb. Driver may change designation of seats.—The driver, operator or other persons in charge of any motor vehicle above mentioned, shall have the right, and he is hereby directed and required at any time when it may be necessary or proper for the comfort and convenience of passengers so to do, to change the designation so as to increase or decrease the amount of space or seats set apart for either race; but no contiguous seats on the same bench shall be occupied by white and colored passengers at the same time; and said driver, operator or other person in charge fo the vehicle, may require any passenger to change his or her seat as it may be necessary or proper; the driver, operator or other persons in charge of said vehicle who shall fail or refuse to carry out the provisions of this section shall be deemed guilty of a misdemeanor, and upon con- 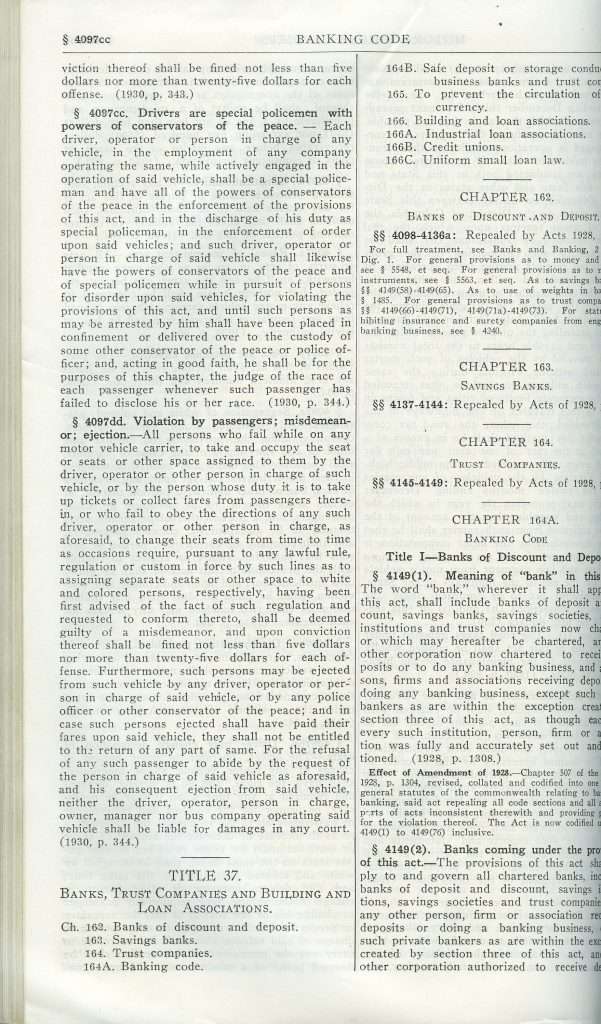 viction thereof shall be fined no less than five dollars nor more than twenty-five dollars for each offense. (1930, p. 343.)

§4097cc. Drives are special policemen with powers of conservators of the peace.—Each driver, operator or person in charge of any vehicle, in the employment of any company operating the same, while actively engaged in the operation of said vehicle, shall be a special policeman and have all of the powers of conservators of the peace in the enforcement of the provisions of this act, and in the discharge of his duty as special policeman, in the enforcement of order upon said vehicles; and such driver, operator or person in charge of said vehicle shall likewise have the powers of conservators of the peace and of special policemen while in pursuit of persons for disorder upon said vehicles, for violating the provisions of this act, and until such persons as may be arrested by him shall have been placed in confinement or delivered over to the custody of some other conservator of the peace or police officer; and, acting in good faith, he shall be for the purposes of this chapter, the judge of the race of each passenger whenever such passenger has failed to disclose his or her race. (1930, p. 344.)

§ 4097dd. Violation by passengers; misdemeanor; ejection.—All persons who fail while on any motor vehicle carrier, to take and occupy the seat or seats or other space assigned to them by the driver, operator or other person in charge of such vehicle, or by the person whose duty it is to take up tickets or collect fares from passengers therein, or who fail to obey the directions of any such driver, operator or other person in charge, as aforesaid, to change their seats from time to time as occasions require, pursuant to any lawful rule, regulation or custom in force by such lines as to assigning separate seats or other space to white and colored persons, respectively, having been first advised of the fact of each regulation and requested to conform thereto, shall be deemed guilty of a misdemeanor, and upon conviction thereof shall be fined not less than five dollars nor more than twenty-five dollars for each offense. Furthermore, such persons may be ejected from such vehicle by any driver, operator or person in charge of said vehicle, or by any police officer or other conservator of the peace; and in case such persons ejected shall have paid their fares upon said vehicle, they shall not be entitled to the return of any part of same. For the refusal of any such passenger to abide by the request of the person in charge of said vehicle as aforesaid, and his consequent ejection from said vehicle, neither the driver, operator, person in charge, owner, manager nor bus company operating said vehicle shall be liable for damages in any court. (1930, p. 344.)