William Wilson Chamberlaine, the son of Richard Henry Chamberlaine and Mary Eliza Wilson Chamberlaine, was born on October 16, 1836, in Norfolk, where his father’s family had resided for several generations. After attending Norfolk Military Academy from 1848 until 1852, he entered Hampden-Sydney College in 1852 but remained for only one year. About 1855 he became a clerk at the Norfolk bank of which his father was an officer.

Chamberlaine joined a volunteer company formed in Norfolk following John Brown‘s 1859 raid on Harpers Ferry and was elected a corporal. When word reached Norfolk in April 1861 that Virginia had seceded, he and his company went on duty guarding the port. Chamberlaine was elected first lieutenant and stationed at nearby Craney Island, from which the following spring he witnessed the battle between the Monitor and the Virginia (formerly the Merrimack). On May 18, 1862, he became second lieutenant in Company G of the 6th Virginia Infantry Regiment. Chamberlaine took part in skirmishes near Richmond and the battle on Malvern Hill. Near Antietam Creek in Maryland on September 17, 1862, he helped to activate a defective cannon and used it to delay a Union advance. During a bombardment he was struck in the face. Bruised and bleeding, his nose fractured, Chamberlaine tended his wounds in Sharpsburg, spent the next day in a hospital, and that afternoon crossed the Potomac River. Assigned to the Second Corps as adjutant to the chief of artillery in February 1863, he saw action at Chancellorsville. During the summer Chamberlaine was attached to the Third Corps and was engaged at Gettysburg. Late in December 1863 he was promoted to captain and served as adjutant to the corps’s artillery commander. He fought at Bristoe Station, Mine Run, the Wilderness, Spotsylvania Court House, and Petersburg and served until the end of the war.

In 1864 Chamberlaine was out of action for about a month recovering from the bite of a water moccasin, and he took a brief leave of absence to marry Matilda Hughes Dillard in Franklin County on April 20 of that year. They had met early in the war while he was chasing slackers in that county. They had two daughters and one son, William Chamberlaine, a brigadier general of coast artillery during World War I (1914–1918). 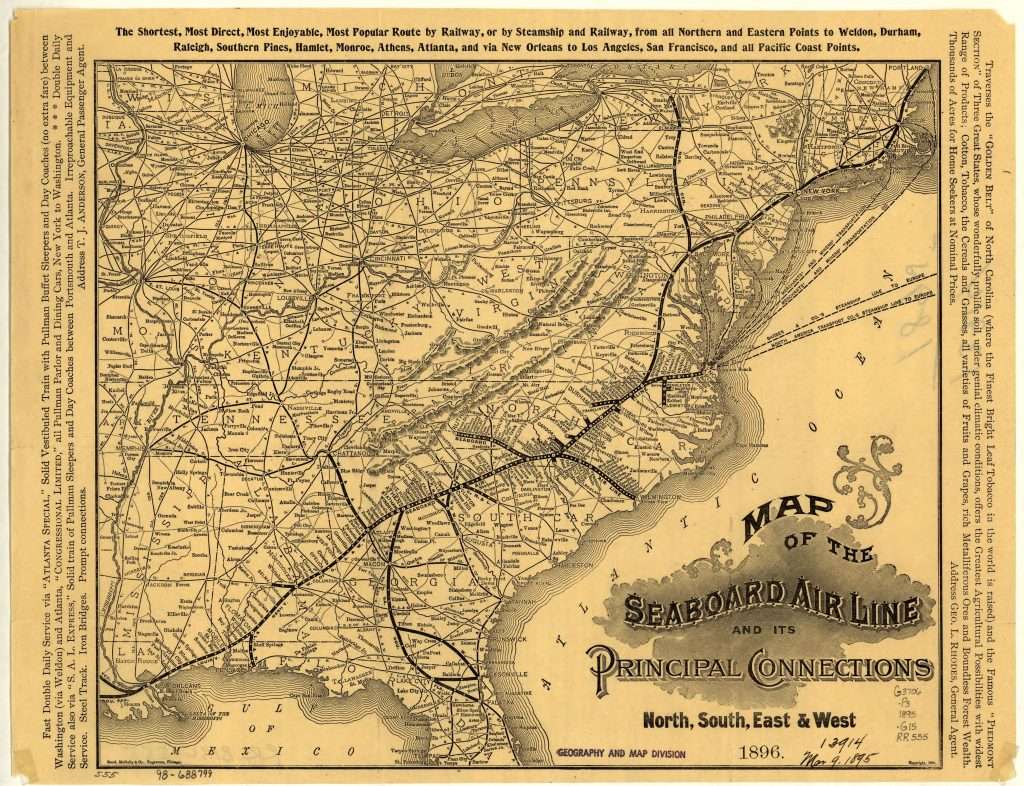 Map of the Seaboard Air Line

Chamberlaine returned to Norfolk after the Civil War and in 1867 became cashier of the Citizens Bank, of which his father was then a director and later president. Chamberlaine resigned in 1877 to become secretary and treasurer of the Seaboard and Roanoke Railroad, which operated an eighty-mile line from Portsmouth to Weldon, North Carolina. Five years later the railroad began acquiring other lines or controlling interest in other lines, leading to the formation by 1889 of the Seaboard Air-Line, which also ran a steamship line with regular service between Norfolk and Baltimore. By 1894 it had expanded to become the Seaboard Air Line System and operated passenger and freight service over about 925 miles of track from Virginia to Georgia. Chamberlaine was comptroller of the Seaboard from 1894 to 1898 and in 1894 was elected to the boards of two of its affiliates, the Carolina Central Railroad and the Raleigh and Augusta Air-line Railroad. He also served as secretary of the affiliated Raleigh and Gaston Railroad in 1898 and 1899. After a new controlling interest reorganized the Seaboard Air Line System in April 1900 with two other railroads into a new corporate umbrella entity called the Seaboard Air Line Railway, Chamberlaine continued to serve as secretary of the Seaboard and Roanoke Railroad, which was his main responsibility during the five years before he retired about 1904.

Chamberlaine was also treasurer and one of the commissioners for the Norfolk City Water Department, a founder in 1884 of the Norfolk Electric Light Company, first president in 1886 of the Savings Bank of Norfolk, and a board member of at least one insurance company. An Episcopalian and a member in good standing of Norfolk’s business elite, Chamberlaine moved his residence about 1900 from a prestigious older neighborhood to the fashionable new suburb of Ghent.

In 1910 or 1911 Chamberlaine moved to Washington, D.C. In 1912 he published Memoirs of the Civil War between the Northern and Southern Sections of the United States of America, 1861 to 1865. The modest recounting of his battlefield experiences, written in businesslike and unromantic prose, reveals him to be a bit of a dandy. He offered few comments on the causes or consequences of the Civil War and indulged in no glorification of himself or his fellow officers. A member of one of the Confederate veterans organizations in Norfolk, Chamberlaine remained active after his retirement and in 1921 was elected commander of the District of Columbia’s Brigade of Confederate Veterans with the honorary rank of brigadier general. His wife died on September 22, 1922. William Wilson Chamberlaine died in Washington, D.C., on October 19, 1923, and was buried in Glenwood Cemetery in the capital.