Wilella Cather was born in Back Creek Valley, Virginia, north of Winchester, on December 7, 1873, to Charles Fectigue Cather, a deputy sheriff and farmer, and Mary Virginia Boak Cather, a teacher. Cather later took the middle name Sibert, after her maternal grandmother. The family had a sheep farm in the Shenandoah Valley. When young Wilella was nine, Cather’s family followed other relatives to the Nebraska prairie, where they settled in Red Cloud, Nebraska. The experience of being uprooted and coming to terms with an unfamiliar landscape was a crucial one for Cather, later documented in her novel My Ántonia.

After graduating from the University of Nebraska in 1895, Cather moved to Pittsburgh, Pennsylvania, to work as an English teacher and journalist for Home Monthly. During this time, she published two books—April Twilights (1903), a volume of poetry, and The Troll Garden (1905), a story collection. She read widely, publishing a number of reviews and articles on topics spanning the fine and performing arts. In 1906, Cather took an editorial position at McClure’s magazine, which put her in close contact with leading authors of the time, as well as with the New York cultural scene generally. Friendships with other writers, travel in Europe and the American Southwest, and her maturing relationship with the remembered Nebraska landscape contributed to her development as a novelist during these years.

Cather’s first novel, Alexander’s Bridge, was published in 1912 to disappointing reviews. O Pioneers! came out the following year and fared better. Drawing on her childhood memories of the Virginia farm and the Nebraska prairie, Cather described the life of a hardworking daughter of a Swedish immigrant, Alexandra Bergson, on the western prairie. In The Song of the Lark (1915), the Swedish protagonist, singer Thea Kronborg, achieves artistic fulfillment within the southwestern landscape—again, an echo of Cather’s own experience.

Cather’s most widely read novel, My Ántonia, like O Pioneers!, centers on the experience of migrating to Nebraska, but it also examines the ambivalence toward prairie culture within a character who has had broader education and experience. In both these respects it is autobiographical. Through the voice of narrator Jim Burden, Cather chronicles the life of an immigrant farm girl named Ántonia Shimerda (later to become Jim’s wife) on the Nebraska prairie.

Cather continued to explore various landscapes and her characters’ complex relationships to them. A Lost Lady (1923) describes the economic and moral fall of Marian Forrester, perhaps a metaphor for what Cather sensed was the devolution of prairie culture itself. Her later books—The Professor’s House (1925), My Mortal Enemy (1926), and Death Comes for the Archbishop—employed more overtly religious themes, using France as a location symbolic of purity and faith. Death Comes for the Archbishop, widely considered Cather’s masterpiece, centers on a pair of French missionaries working among Hispanic, Navajo, and Pueblo people of the New Mexico desert. 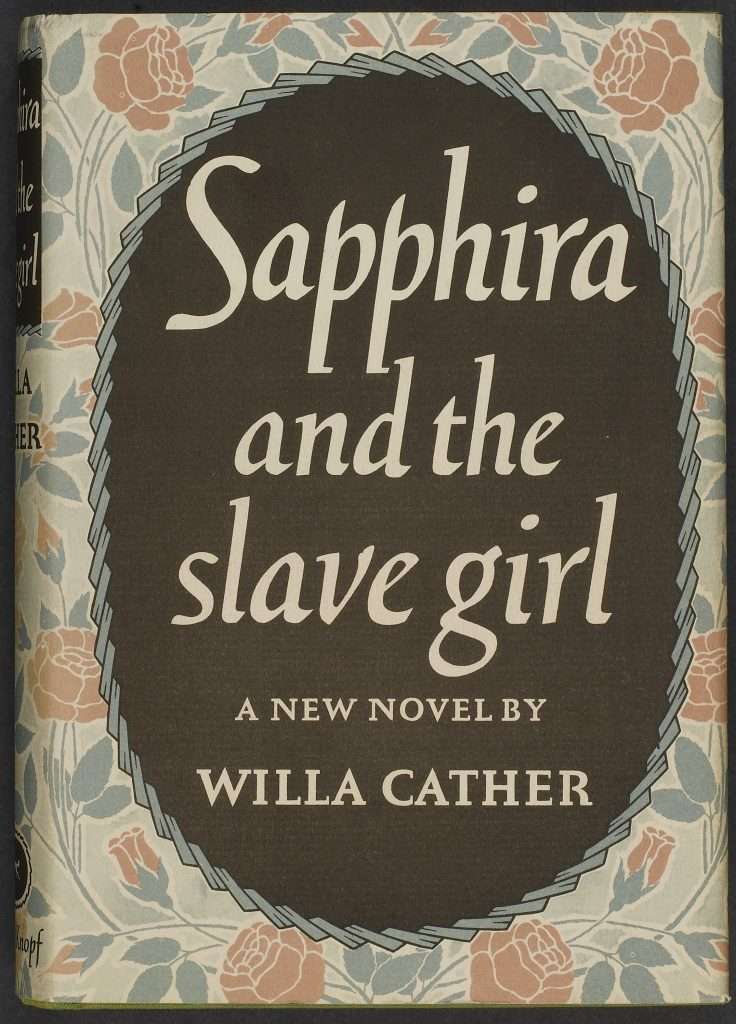 Sapphira and the slave girl

Sapphira and the Slave Girl is perhaps one of Cather’s best and most overlooked novels. Set in and around her native Winchester, Virginia, in the years before the American Civil War (1861–1865), it describes the unhappy marriage of Sapphira and Henry Colbert and the evil to which Sapphira is happy to expose her slave Nancy in order to achieve her own ends. With Henry’s help, his daughter Rachel arranges for Nancy’s escape to Canada via the Underground Railroad. The incident is based on a similar incident in Cather’s own family, in which her grandmother Boak helped a slave escape in 1856.

In a 1940 review, the New York Times praised Sapphira for examining “the question of slavery without any portentous fanfare, entirely through the lives of her characters, without the editorializing that might have pointed up the discussion, but would have been fatal to the novel as a creative work. Nevertheless, you see the various points of view as they operated in Virginia in that time.”

Cather lived with her companion, Edith Lewis, in New York until her death from a cerebral hemorrhage on April 24, 1947. She was buried in Jaffrey, New Hampshire.

RELATED CONTENT
Categories:
Type:
MAP
TIMELINE
December 7, 1873
Willa Cather is born in Back Creek Valley, north of Winchester.
1883
The family of Willa Cather moves from Winchester, in the Shenandoah Valley, to Nebraska, eventually settling in Red Cloud.
1895
Willa Cather graduates from the University of Nebraska.
1906
Willa Cather begins work at McClure's magazine in New York City.
1940
Willa Cather's final novel, Sapphira and the Slave Girl, which takes place in and around her native Winchester, is published. It is based on an incident in the life of Cather's maternal grandmother.
April 24, 1947
Willa Cather dies of a cerebral hemorrhage. She is buried in Jaffrey, New Hampshire.
FURTHER READING
CITE THIS ENTRY