Cary was the son of the builder Henry Cary (ca. 1650–1720) and Judith Lockey Cary and was born in the mid- or late 1670s, probably at his father’s Forest plantation in Warwick County. Little is known of his education or training, but he must have learned about the management of construction projects from his father, though it is unlikely that he practiced a trade.

Following in his father’s footsteps, Cary became one of the leading building contractors in Virginia. The first evidence of his involvement in construction appears late in the 1710s, following his father’s retirement from Williamsburg. In 1718 Cary undertook the erection of a T-shaped church for Saint Paul’s Parish in the portion of New Kent County that in 1720 became Hanover County and in the following year erected a fence around the churchyard. His building career blossomed in the capital in the 1720s. In December 1720 the governor’s Council authorized Cary to complete work on the residence for the colony’s governor, a project that must have given him satisfaction. His father had begun the construction but had been discharged before finishing the building because of clashes with the Council and Lieutenant Governor Alexander Spotswood. From time to time during the ensuing years when the palace required repairs, Cary often took charge of them, and he repaired the Capitol and constructed new gates for it in 1726. 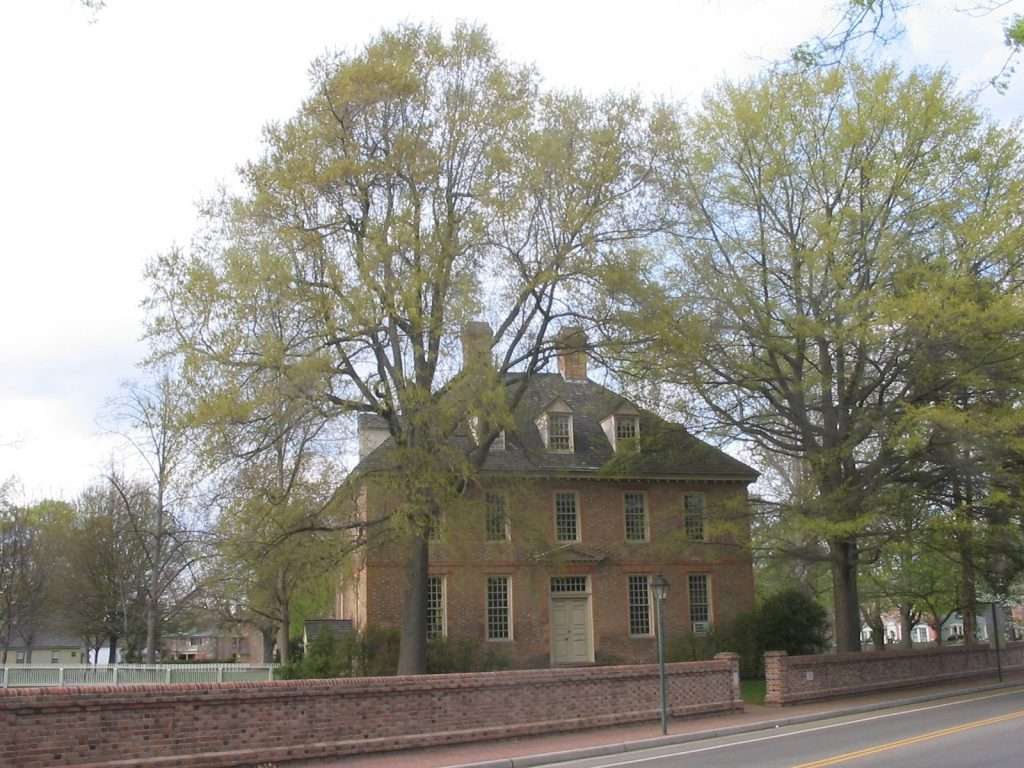 The Brafferton at the College of William and Mary

It is likely, though documentation is lacking, that in 1723 Cary supervised construction of the Brafferton, a two-story, double-pile brick building southeast of the main building at the College of William and Mary. Intended to house a school for the education of American Indians, the Brafferton is one of the earliest manifestations of the “neat and plain” style that dominated late colonial Virginia architecture. Beneath a hip roof and modillion cornice, the glazed headers of the Flemish bond walls give a rich texture to an otherwise plain facade, accentuated only by rubbed corners, jambs, and arches and a pediment over the front entrance. In 1729 Cary directed construction of the chapel wing on the south side of the college building that complemented the size and compass-headed windows of the original hall wing on the north. Within a month of the dedication of the chapel in 1732, Cary began his last major project for the college, a residence for its president. Set on the north side of a forecourt originally ornamented with topiary, the president’s house is a near mirror image of the Brafferton in size, materials, and details.

The absence of private papers makes the full scope of Cary’s business unrecoverable, particularly his domestic work in Williamsburg and surrounding areas. Surviving examples of Cary’s public work include a 1728 brick church for Elizabeth City Parish in Hampton. The building has suffered from a fire and numerous alterations, but the original plan of what is now Saint John’s Episcopal Church was cruciform, the walls decorated with compass-headed windows, rubbed work, and glazed headers, details that became standard during the period. About this time Cary did some major, though unspecified, work for Stratton Major Parish in King and Queen County that required him to bring suit against the parish vestry, presumably for nonpayment. Unlike the work of his father, several of the buildings that Cary erected still survive, showing high-quality craftsmanship and providing a useful guide to architectural fashion in the colony early in the eighteenth century, a style to which he contributed several important and enduring examples.

Old Bruton Church, Williamsburg, Virginia, in the Time of Lord Dunmore
Cary was a member of the Warwick County Court, even though he resided in Williamsburg and was a churchwarden for Bruton Parish Church. He bought and sold land in the capital during the 1720s and served as keeper of the magazine there. Late in the decade he began amassing landholdings along the James River at and above the fall line. In 1730 an act of assembly enabled him to sell the Forest, the entailed family land in Warwick County, which allowed him to purchase even more land in the west. During his lifetime he acquired more than 20,000 acres.

About 1733 Cary moved to his new estate on the bank of the James River in the part of Henrico County that a few months before his death became Chesterfield County. Sometime during that decade he built a two-story brick house that he named Ampthill. During the winter of 1929–1930 the house, by then much changed, was moved to the West End of Richmond. The nearby river landing, on which he and later his son erected warehouses and manufacturing structures and where he owned an ordinary and the ferry, was called Warwick. Cary spent the remainder of his life as a country gentleman, leaving no evidence that he resurrected his contracting business. He became a member of the Henrico County Court, was sheriff of the county in 1733, and was a churchwarden of Dale Parish in 1739.

Cary married Sarah Sclater about 1710. They had two sons and one daughter, all of whom had died by the end of 1734. Following the death of his wife on an unrecorded date before 1719, he married Ann Edwards. They had three daughters and one son, Archibald Cary, who became the first Speaker of the Senate of Virginia. By the time Cary married a third time, he was a wealthy man. He executed a marriage agreement that secured his wife’s financial future in the event he predeceased her and that also protected the interests of his own children. The date of that marriage has been estimated at about 1741. His third wife’s given name was Elizabeth, but her maiden name is not certain. She may have been a sister or close relation of John Brickenhead, a London peruke maker. They are not known to have had any children.

Cary died, probably at Ampthill, during the winter of 1749–1750, perhaps not long before his will was proved in the Chesterfield County Court on March 2, 1750. The place of his burial is not recorded.

RELATED CONTENT
Categories:
Type:
MAP
TIMELINE
Mid- to Late 1670s
Henry Cary is born, probably in Warwick County. He is the son of Henry Cary and Judith Lockey Cary.
1710
Henry Cary and Sarah Sclater marry. They will have three children, all of whom die by the end of 1734.
1718
Henry Cary undertakes the erection of a T-shaped church for Saint Paul's Parish in the portion of New Kent County that will soon become Hanover County.
After 1719
Henry Cary and Ann Edwards marry. They will have four children.
December 1720
The governor's Council authorizes Henry Cary to complete work on the governor's residence, a project begun by his father.
1723
Henry Cary likely supervises construction of the Brafferton, a building at the College of William and Mary.
1726
Henry Cary constructs new gates for the Capitol, in Williamsburg.
1728
Henry Cary completes construction of a brick church for Elizabeth City Parish in Hampton.
1729
Henry Cary directs construction of the chapel wing at the College of William and Mary.
1730
An act of the General Assembly enables Henry Cary to sell the Forest, the entailed family land in Warwick County.
1732
Henry Cary begins construction work on a president's residence at the College of William and Mary.
ca. 1733
Henry Cary moves to a new estate on the bank of the James River in the part of Henrico County that will become Chesterfield County. He will build a house, Ampthill, there.
1733
Henry Cary serves as sheriff of Henrico County.
1739
Henry Cary serves as a churchwarden of Dale Parish.
ca. 1741
Henry Cary and a woman named Elizabeth, maiden name uncertain, marry.
Winter 1749—1750
Henry Cary dies, probably at Ampthill, his estate in Chesterfield County.
March 2, 1750
The will of Henry Cary is proved in the Chesterfield County Court.
Winter 1929—1930
Henry Cary's 1730s estate, Ampthill, is moved to the West End of Richmond.
FURTHER READING
CITE THIS ENTRY