Caruthers was born on December 23, 1802, in Lexington and was the son of William Caruthers, a prosperous merchant and landowner, and Phebe Alexander Caruthers, a sister of Archibald Alexander, president of Hampden-Sydney College from 1797 to 1806. Caruthers attended Washington College (later Washington and Lee University) from 1817 to 1820 before entering the medical college of the University of Pennsylvania, from which he received a degree in 1823. On June 30 of that year Caruthers applied for a marriage license and early in July married Louisa Catherine Gibson, a wealthy heiress from Whitemarsh Island, Chatham County, Georgia. They had three sons and two daughters who survived childhood. The couple took up residence in Lexington, where Caruthers practiced medicine and enthusiastically engaged in various civic activities, including serving as president of a local debating society. Financial difficulties led him in 1829 to move his family to New York City, where he established a medical practice and assisted in treating victims of the 1832 cholera epidemic. 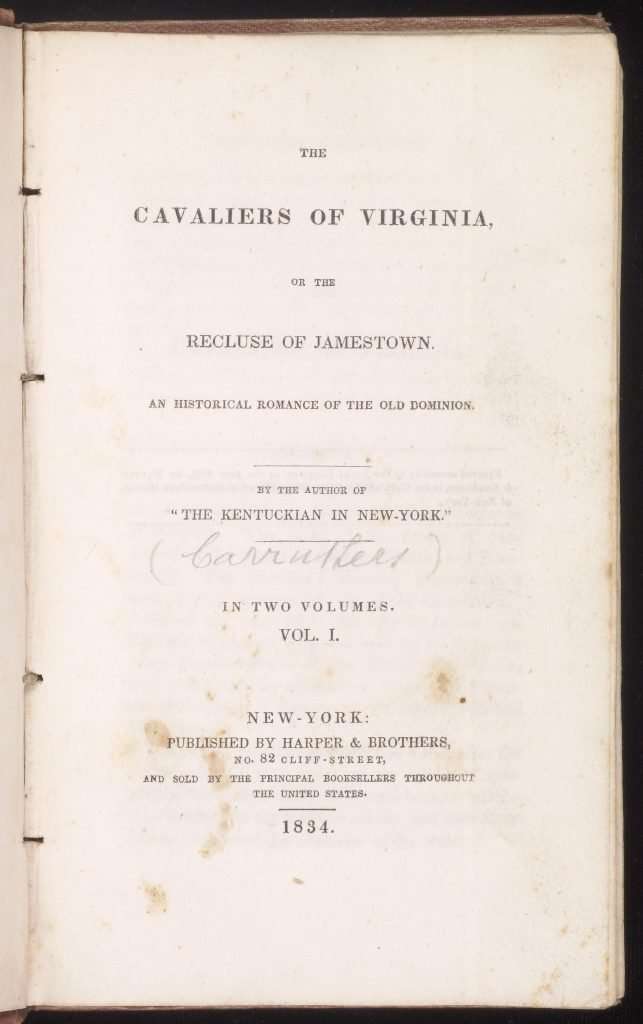 The Cavaliers of Virginia, or the Recluse of Jamestown.

In 1834 Caruthers published his first work, The Kentuckian in New-York; or, The Adventures of Three Southerns, by a Virginian. A comic two-volume epistolary novel that borrowed from several genres, The Kentuckian narrated the intersectional travels of three young southern gentlemen through the North and Deep South and was notable for its Daniel Boone–like title character, Montgomery Damon. Caruthers demonstrated his explicit nationalistic vision in having the travelers overcome their sectional prejudices and discover newfound appreciation for the various regions of the country. His next novel, the two-volume Cavaliers of Virginia; or, The Recluse of Jamestown. An Historical Romance of the Old Dominion (1834–1835), combined his interest in Virginia history with historical romance and took for its subject Bacon’s Rebellion (1676–1677). Caruthers portrayed Nathaniel Bacon as the heroic leader of an insurrection mounted to preserve the liberties of the people against Virginia’s oppressive royal governor, a portrait drawing on the interpretation of the historian John Daly Burk.

In 1835 Caruthers returned to Lexington, where he worked on his third and final novel, The Knights of the Golden Horse-Shoe, a Traditionary Tale of the Cocked Hat Gentry in the Old Dominion. Again selecting an event from Virginia’s colonial past, he fashioned the first extended literary treatment of Lieutenant Governor Alexander Spotswood‘s 1716 expedition to the Blue Ridge Mountains. Publication was delayed when a house fire destroyed Caruthers’s papers on the eve of his move to Georgia in 1837. In Savannah he practiced medicine, served two terms as a Whig on the city’s board of aldermen, and became a charter member of the Georgia Historical Society. Caruthers also published short works in several periodicals including the New York–based Knickerbocker magazine, which in 1838 ran “Climbing the Natural Bridge,” a sketch based on an incident during his college days, and the Magnolia: or Southern Monthly, which serialized the reworked Knights of the Golden Horse-Shoe in 1841. In 1845 a small Alabama publishing house issued the novel in book form. 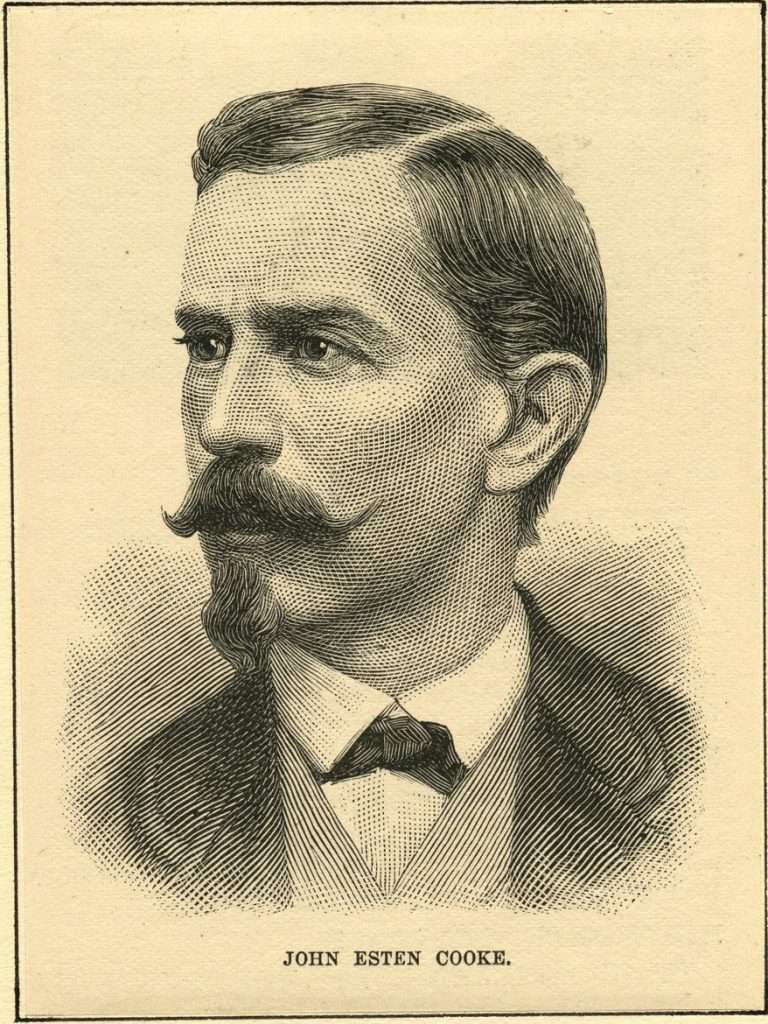 Early in his career Caruthers sought to establish a reputation as a writer of national scope and voice. Unlike some of his contemporaries whose regional writing inspired universal application, he was unable to transcend the genre in which he later worked. The Virginia stories evinced a strong regional pride while impressing critics as superior to his first novel, and Caruthers became identified as a sectional historian and romancer of the Old Dominion. After his death the Southern and Western Literary Messenger and Review observed, “He was a Virginian by birth, and in all his feelings.” His literary attainments were often ignored in the decades immediately following his death, even in his native state. Modeled on the romances of Sir Walter Scott, Caruthers’s second and third novels established a precedent followed by such later Virginia writers as John Esten Cooke and Mary Johnston, but it was not until 1884 that he was credited as the originator of what came to be known as the Virginia novel. Since the 1920s literary scholars have regarded Caruthers as the first significant Virginia novelist and among the earliest southern practitioners of the romantic tradition.

Caruthers contracted tuberculosis in the spring of 1846 and died on August 29 of that year at a health resort at Kennesaw Mountain, Georgia. He was buried most likely in an unmarked grave in the cemetery of Saint James Episcopal Church, in Marietta, Georgia.