Joseph Trigg Campbell was born on November 28, 1827, in Washington County, the son of Edward Campbell, who served in the Convention of 1829–1830, and Rhoda Trigg Campbell. His brother John A. Campbell represented Washington County in the Convention of 1861, and his uncles included David Campbell, governor of Virginia, and John Campbell, who twice sat on the Council of State and served as treasurer of the United States. He grew up at Hall’s Bottom in Washington County, in the large brick house his father had built near the log cabin in which his grandfather had lived when he first settled in the region in the 1770s. Campbell was educated at the Abingdon Male Academy and from 1846 to 1848 studied law at the University of Virginia.

Admitted to the bar in 1849, Campbell practiced law in Abingdon during the 1850s. On October 8, 1856, he married Mary Campbell Preston, who also lived in Abingdon. They had two sons and two daughters. Shortly after Virginia seceded from the Union, Campbell became a first lieutenant on April 22, 1861, and six weeks later was made adjutant of the 37th Virginia Infantry Regiment. After an attack of what was called “camp fever” produced an atrophy of the muscles in his left shoulder, he resigned on March 22, 1862, returned home, and served from 1863 to 1865 as commonwealth’s attorney of Washington County. 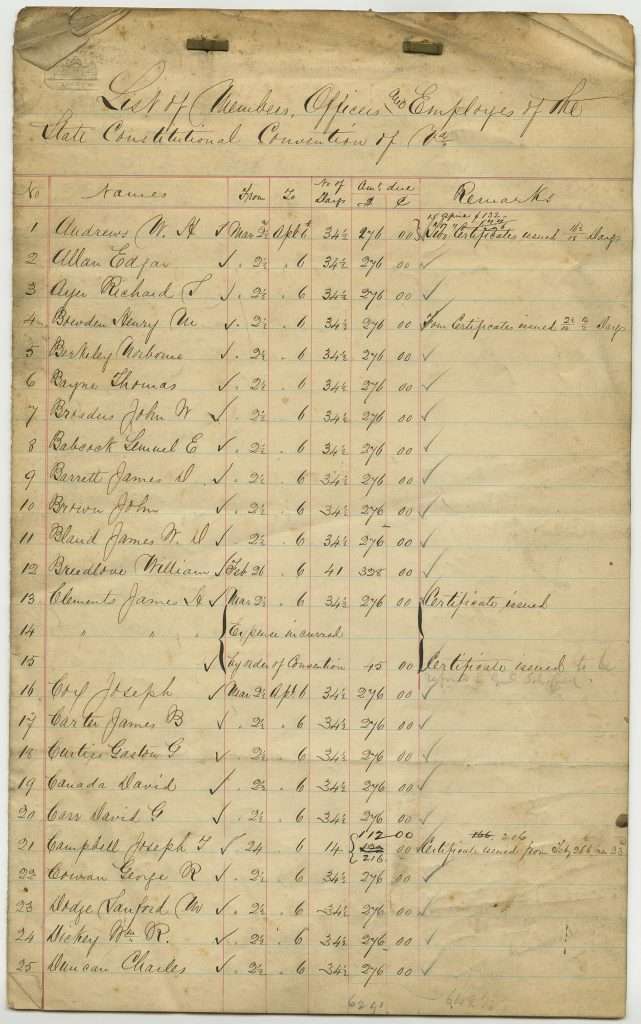 List of Members, Officers and Employes [sic] of the State Constitutional Convention of Va.

In October 1867 Campbell was elected one of two delegates to represent the counties of Smyth and Washington in a convention called to write a new constitution for Virginia. On behalf of the conservative members he opened the convention by nominating Norval Wilson, a Methodist minister and delegate from Frederick County, to be president of the convention, but as anticipated the radicals and reformers elected John C. Underwood instead. Brigadier General John M. Schofield described both Campbell and Wilson as unreconstructed Confederates. Campbell sat on the Committee on the Judiciary, excepting County and Corporation Courts. Possibly in poor health during and following the convention, he sometimes did not attend its sessions and seldom spoke during the portion of the convention for which the debates were recorded. Campbell missed a number of the most important votes but when in attendance voted regularly against the reformers. On April 17, 1868, he voted against the constitution that the convention wrote, which was ratified in 1869.

A speech Campbell made on the subject of Freemasonry and education at the laying of the cornerstone for a new building at the Abingdon Male Academy has been printed as representative of his oratory. He wrote his will in July 1871 during a stay at Warm Springs and appointed his wife and two brothers to act as his executors. Campbell died in Washington County on April 16, 1876, and was buried in the cemetery at Sinking Spring Presbyterian Church near Abingdon.