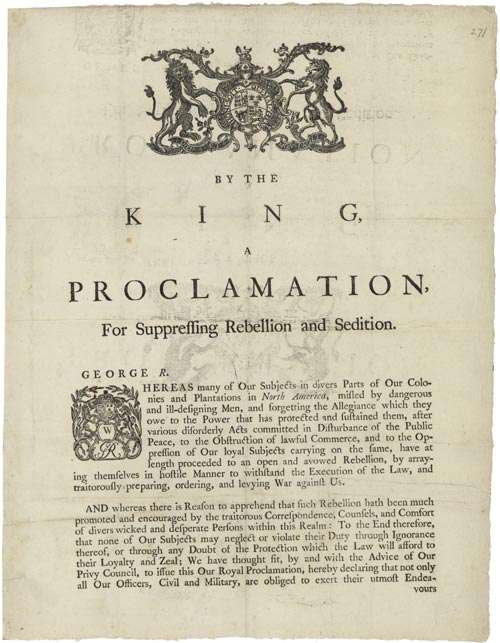 By the King, A Proclamation, For Suppressing Rebellion and Sedition, Page 1

WHEREAS Many of Our Subjects in divers Parts of Our Colonies and Plantations in North America, misled by dangerous and ill-designing Men, and forgetting the Allegiance which they owe to the Power that has protected and sustained them, after various disorderly Acts committed in Disturbance of the Public Peace, to the Obstruction of lawful Commerce, and to the Oppression of Our loyal Subjects carrying on the same, have at length proceeded to an open and avowed Rebellion, by arraying themselves in hostile Manner to withstand the Execution of the Law, and traitoroursly preparing, ordering, and levying War against Us.

AND whereas there is Reason to apprehend that such Rebellion hath been much promoted and encouraged by the traitorous Correspondence, Counsels, and Comfort of divers wicked and desperate Persons within this Realm: To the End therefore, that none of Our Subjects may neglect or violate their Duty through Ignorance thereof, or through any Doubt of the Protection which the Law will afford to their Loyalty and Zeal; We have thought fit, by and with the Advice of Our Privy Council, to issue this Our Royal Proclamation, hereby declaring that not only all Our Officers, Civil and Military, are obliged to exert their utmost Endea- 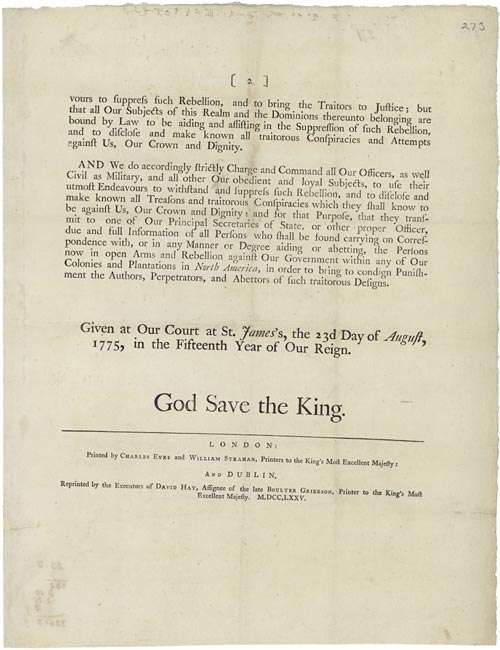 By the King, A Proclamation, For Suppressing Rebellion and Sedition, Page 2

vours to suppress such Rebellion, and to bring the Traitors to Justice; but that all Our Subjects of this Realm and the Dominions thereunto belonging are bound by Law to be aiding and assisting in the Suppression of such Rebellion, and to disclose and make known all traitorous Conspiracies and Attempts against Us, Our Crown and Dignity.

AND We do accordingly strictly Charge and Command all Our Officers, as well Civil as Military, and all other Our obedient and loyal Subjects, to use their utmost Endeavours to withstand and suppress such Rebellion, and to disclose and make known all Treasons and traitorous Conspiracies which they shall know to be against Us, Our Crown and Dignity: and for that Purpose, that they transmit to one of Our Principal Secretaries of State, or other proper Officer, due and full Information of all Persons who shall be found carrying on Correspondence wit, or in any Manner or Degree aiding or abetting, the Persons now in open Arms and Rebellion against Our Government within any of Our Colonies and Plantations in North America, in order to bring to condign Punishment the Authors, Perpetrators, and Abettors of such traitorous Designs.

God Save the King.