Burwell was the son of Elizabeth Carter Burwell and her first husband, Nathaniel Burwell (1680–1721), and was born at his father’s Fairfield plantation on Carter’s Creek in Gloucester County. His paternal grandfather was Lewis Burwell (d. 1710), a wealthy Gloucester County planter, and his maternal grandfather was Robert “King” Carter, one of the wealthiest men in North America, who served as president of the governor’s Council. Burwell’s elder brother Lewis Burwell (d. 1756) and one of his younger brothers, Robert Burwell, also served on the Council. After the death of Burwell’s father, King Carter served as his guardian. In 1724 his mother married George Nicholas, a Williamsburg physician. 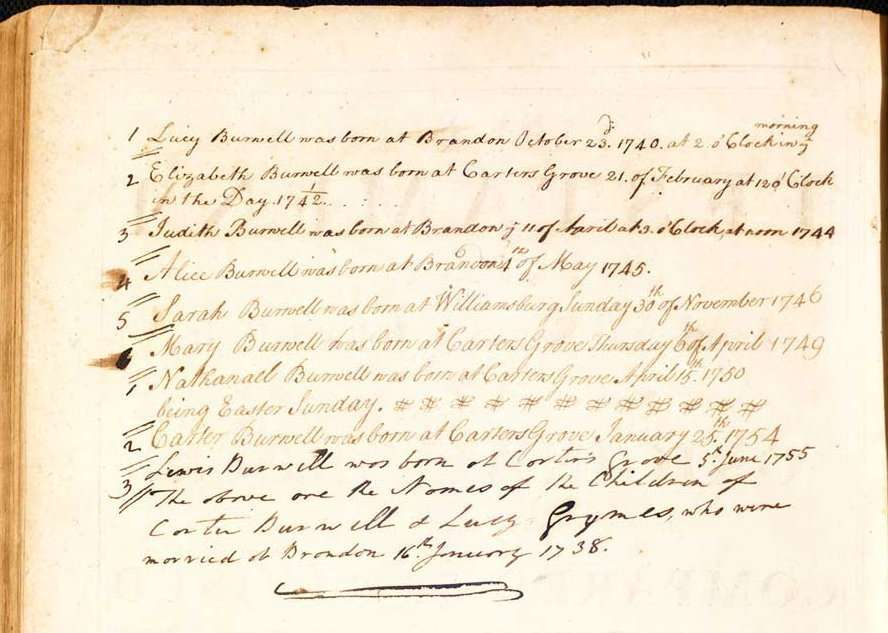 About the time of his mother’s remarriage Burwell entered the grammar school of the College of William and Mary. When he reached his majority he came into a substantial inheritance from his father, and in 1734, under the terms of King Carter’s will, Burwell inherited much more land, including an interest in a vast tract in the lower Shenandoah Valley. From his grandfather he also inherited 1,400 acres near the James River on the border of James City and York counties with the stipulation that the plantation there be called Carter’s Grove. In December 1737 Burwell was named a member of the quorum in the new commission of the peace for James City County, and by 1752 he was the presiding justice. On January 5, 1738, he married Lucy Ludwell Grymes, whose father was a wealthy Middlesex County planter and a member of the Council. They had six or seven daughters and three sons, the best known of whom was Nathaniel Burwell (1750–1814), who represented James City County in the Convention of 1788.

Burwell was elected to the House of Burgesses from James City County in 1742 and reelected twice. He served until 1755, by which time he chaired the influential Committee of Privileges and Elections and was a ranking member of the Committee of Propositions and Grievances. A young man of intelligence and talent with powerful family connections, he served on committees for financing the frontier wars and overseeing the construction of a new capitol. A political ally of John Robinson, Speaker of the House of Burgesses and treasurer of Virginia, Burwell reportedly assisted Robinson in managing the flow of business by prodding a member with his cane to prompt him to speak as desired.

Burwell was twice proposed for membership on the governor’s Council. In July 1752 Lieutenant Governor Robert Dinwiddie recommended Burwell, among several others, for the seat vacated by the death of William Dawson, the bishop of London’s commissary in Virginia, but Dawson’s brother and successor, Thomas Dawson, was appointed instead. Councillor John Blair (ca. 1687–1771) recommended Burwell for another vacancy in 1754, but this time Dinwiddie objected, acknowledging that Burwell was “very well Qualified for a Seat at the Board” but observing that Burwell’s brother was then the president of the Council and two of his brothers-in-law were also members, making “too many of one Family.”

Five years after Burwell assumed ownership of Carter’s Grove plantation he initiated a building program and employed brick mason David Minetree, carpenter John Wheatley, and artisan Richard Baylis to direct the finishing of the interior. With their assistance, and by adapting designs in his copy of William Salmon’s Palladio Londinensis, Burwell conceived and between 1751 and 1755 erected a plantation house that was a masterpiece of early Georgian architecture in Virginia. The two-and-one-half-story brick mansion had a hipped roof and was flanked by dependencies standing free from the house at either side and parallel to the main axis, each a story and a half high with end chimneys. Elegant in proportion and beautiful in detail, Carter’s Grove has subsequently been enlarged and much altered, but it remains one of the gems of colonial Virginia’s architecture.

By that time Burwell owned more than 3,000 acres in James City County and more than ninety slaves. Archaeological excavations and plantation records relating to his slaves have revealed much about how his workers and their families lived during and after his time. Not yet forty years old when he completed Carter’s Grove, Burwell died less than two years later. He wrote his will on May 6, 1756, added a codicil on May 14, and died on an unrecorded date between then and October 26, 1756, when the will was proved in the General Court. Burwell was buried probably in the graveyard at Carter’s Grove.