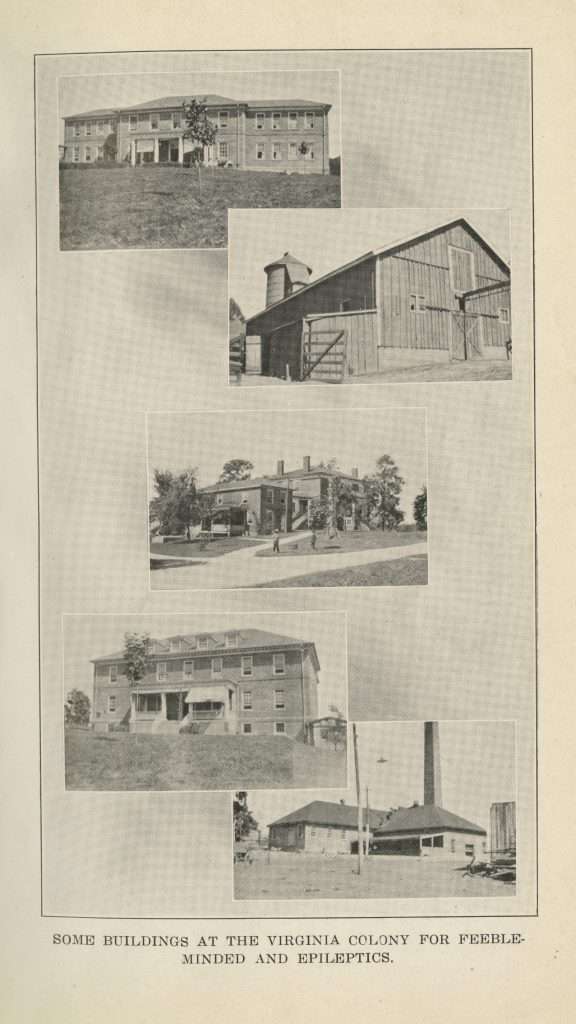 Some Buildings at the Virginia Colony for Feeble-Minded and Epileptics.

Carrie Elizabeth Buck was born in Charlottesville on July 2, 1906, the daughter of Frank W. Buck, a tinner, and Emma A. Harlow Buck. Her father died when she was very young. In April 1920 her mother was committed to the Virginia State Colony for Epileptics and Feeble-Minded in Lynchburg with a diagnosis of feeblemindedness, a vague term that was less a medical finding than a reflection of the examiners’ distaste for her sexual behavior. Carrie Buck had been removed from her mother’s care when she was three and placed with a foster family. She attended local schools, where her records indicate normal progress each year, but before she completed sixth grade her foster family withdrew her to perform housework for them.

In 1923 Carrie Buck became pregnant, by her account as the result of rape committed by a nephew of the foster family with whom she had lived for almost fourteen years. Believing that the pregnancy was evidence of promiscuity and thus of feeblemindedness, the foster family sought to have her committed, like her mother, to the Virginia State Colony for Epileptics and Feeble-Minded. At a hearing on January 23, 1924, Buck was adjudged epileptic and feebleminded. Following the birth on March 28, 1924, of an illegitimate daughter, Vivian Alice Elaine Buck, Buck entered the colony in Lynchburg on June 4. Her former foster family took her infant daughter into their home and gave her their name. 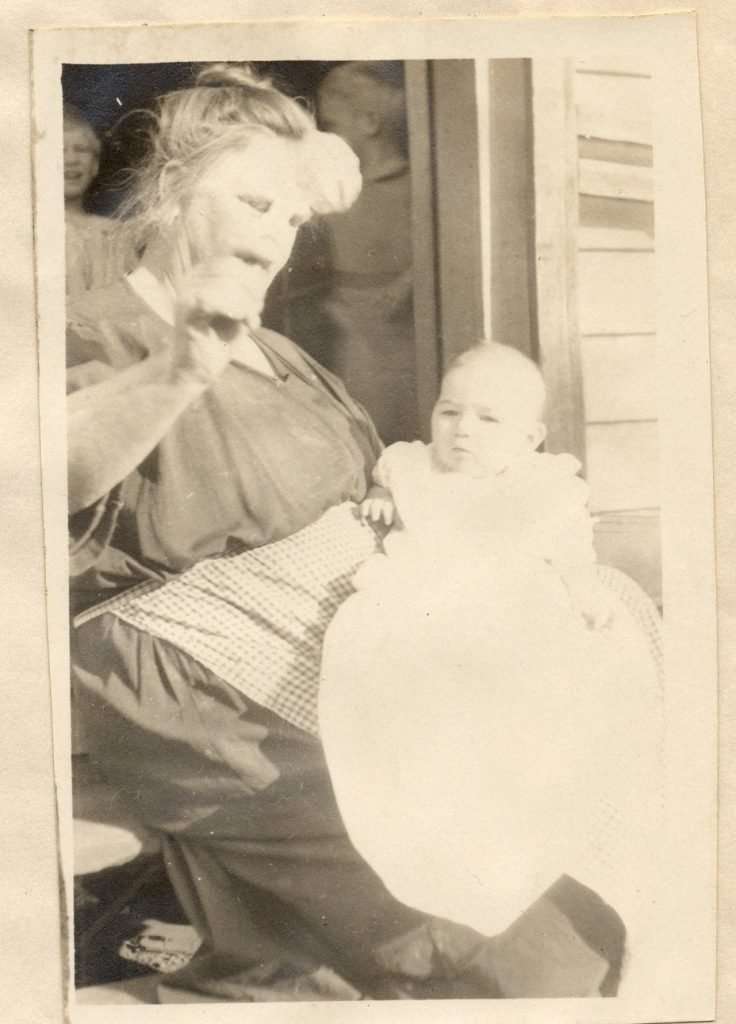 Shortly after Buck’s commitment, Albert S. Priddy, superintendent and physician at the colony, selected her to be the subject of the test case for the constitutionality of Virginia’s recently enacted involuntary sterilization statute. This law provided that the state could sterilize anyone found to be incompetent because of alcoholism, epilepsy, feeblemindedness, insanity, or other factors. Behind the law was the eugenic assumption that these traits were hereditary and that sexual sterilization could thus prevent their transmission. Uncertain that the new law could withstand a constitutional challenge, the framers and supporters of the law arranged to test it in court. They chose Buck in the belief that she had inherited her feeblemindedness from her mother and that her daughter showed signs of slow mental development as well.

The litigation went to circuit and appeals courts in Virginia, where the judges approved Buck’s sterilization. Eventually styled Buck v. Bell (referring to John H. Bell, the superintendent of the Virginia colony following Priddy’s death in 1925), the case went on to the United States Supreme Court in April 1927. On May 2 of that year the court ruled that Virginia’s law was constitutional and that Buck should be sterilized. In the majority opinion Justice Oliver Wendell Holmes enthusiastically declared that the “principle that sustains compulsory vaccination is broad enough to cover cutting the Fallopian tubes.” In an oft-quoted phrase, he concluded that “three generations of imbeciles are enough.” Consequently, Buck and approximately 8,300 other Virginians, including her younger half sister, were sterilized under the state law between 1927 and 1972.

Eugenics in Virginia
After being surgically sterilized on October 19, 1927, and released from the Virginia colony to work for a family in Bland County, Buck married William D. Eagle, a widowed carpenter, on May 14, 1932. A quarter-century after his death on July 23, 1941, she married Charles A. Detamore, of Front Royal, on April 25, 1965. Friends, relatives, and professionals who knew her later in life deny the accuracy of her diagnosis as mentally retarded. She was independent and a helpful person to others for most of her life. Carrie Buck Eagle Detamore died on January 28, 1983, in a nursing home in Waynesboro and was buried in Oakwood Cemetery in Charlottesville. Vivian Dobbs, the daughter from whom she was separated shortly after giving birth, is buried on an adjacent hillside. Belying Justice Holmes’s famous opinion, Dobbs was an honor student when she died of enterocolitis on July 3, 1932, at age eight. The practice of involuntary sterilization did not cease in Virginia institutions until 1972, and the enabling act remained on the books until April 1974.
RELATED CONTENT
Categories:
Type:
MAP
TIMELINE
July 2, 1906
Carrie Buck is born in Charlottesville, the daughter of Frank W. Buck, a tinner, and Emma Adeline Harlowe Buck.
1910
At age three, Carrie Buck is taken from the care of her mother, Emma A. Harlowe Buck, and placed with foster parents, John and Alice Dobbs.
April 1920
Authorities deem Emma Buck a "low grade moron" and promiscuous for having a child out of wedlock and commit her to the Virginia State Colony for Epileptics and Feeble-Minded in Madison Heights, near Lynchburg.
Summer 1923
John and Alice Dobbs's nephew Clarence Garland allegedly rapes Carrie Buck, their foster child, and she becomes pregnant.
January 23, 1924
Responding to a petition by her foster parents, a court in Charlottesville adjudges the pregnant seventeen-year-old Carrie Buck to be feebleminded.
March 20, 1924
The General Assembly passes a bill that allows for the state-enforced sterilization of those deemed genetically unfit for procreation.
March 28, 1924
Vivian Alice Elaine Buck, the daughter of Carrie Buck, is born in Charlottesville.
June 4, 1924
Having been adjudged feebleminded and committed by a Charlottesville court, Carrie Buck arrives at the Virginia State Colony for Epileptics and Feeble-Minded in Madison Heights, near Lynchburg. Her mother, Emma Buck, is also an inmate there.
November 19, 1924
Judge Bennett T. Gordon, of the Amherst County Circuit Court, hears arguments in the case of Buck v. Priddy, appealing the order to sterilize Carrie Buck.
April 22, 1927
The U.S. Supreme Court hears oral arguments in the case of Buck v. Bell, appealing an order to sterilize Carrie Buck.
May 2, 1927
In Buck v. Bell, the U.S. Supreme Court upholds a Virginia order to sterilize Carrie Buck.
October 19, 1927
Dr. John H. Bell performs the operation to sterilize Carrie Buck several months after the U.S. Supreme Court upholds, in Buck v. Bell, the constitutionality of a Virginia law allowing state-enforced sterilization.
April 1931
Vivian Dobbs, the daughter of Carrie Buck, is placed on the honor roll at the Venable Public Elementary School in Charlottesville.
May 14, 1932
Carrie Buck marries William Davis Eagle, a widowed carpenter.
July 3, 1932
Vivian Dobbs, the daughter of Carrie Buck, dies of enterocolitis at the age of eight.
July 23, 1941
William Davis Eagle dies. He is survived by his wife, Carrie Buck Eagle.
April 25, 1965
Carrie Buck Eagle marries Charles Albert Detamore, of Front Royal.
1974
Virginia repeals its 1924 law allowing state-enforced sterilization. The U.S. Supreme Court ruling Buck v. Bell (1927) affirming the law's constitutionality has yet to be overturned.
January 28, 1983
Carrie Buck Eagle Detamore dies in a nursing home in Waynesboro and is buried in Charlottesville's Oakwood Cemetery with her husband, Charlie Detamore.
May 2, 2002
Governor Mark Warner apologizes for Virginia's eugenics program, and a state historic highway marker in Charlottesville is dedicated to Buck v. Bell.
FURTHER READING
CITE THIS ENTRY