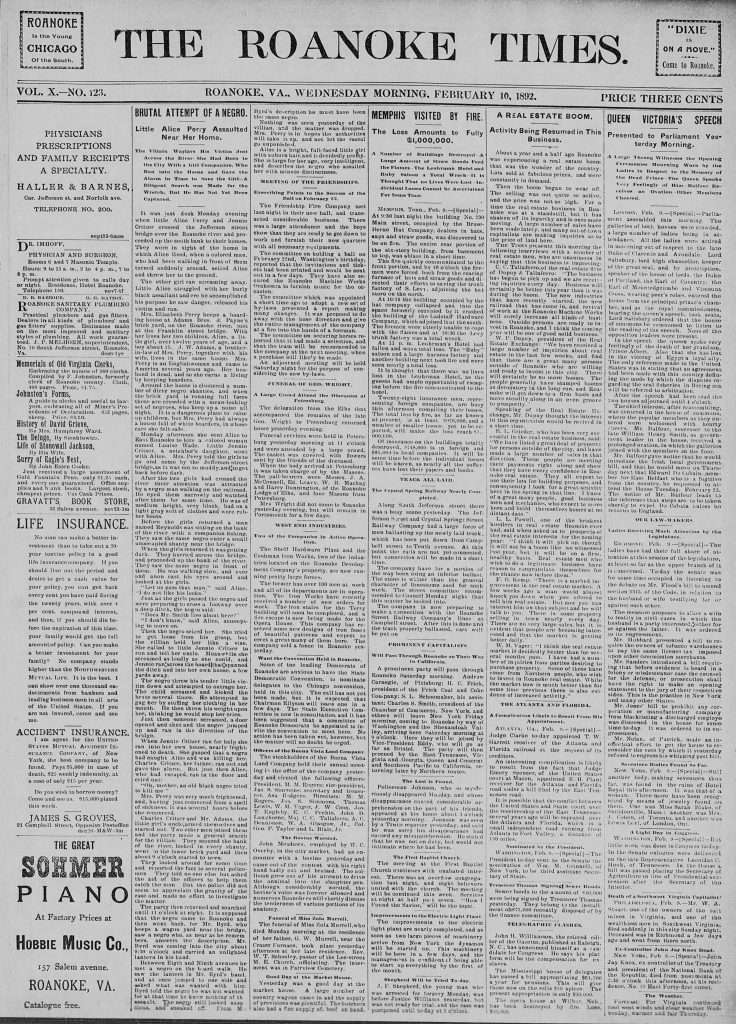 BRUTAL ATTEMPT OF A NEGRO.

The Villain Waylays His Victim Just Across the River—She Had Been to the City With a Girl Companion, Who Ran into the House and Gave the Alarm in Time to Save the Girl—A Diligent Search was made for the Wretch, But He Has Not Yet Been Captured.

It was just dusk Monday evening when little Alice Perry and Jennie Critzer crossed the Jefferson street bridge over the Roanoke river and proceeded up the south bank to their homes. They were in sight of the home in which Alice lived, when a colored man, who had been walking in front of them turned suddenly around, seized Alice and threw her to the ground.

The other girl ran screaming away. Little Alice struggled with her burly black assailant and ere he accomplished his purpose he saw danger, released his victim and ran.

Mrs. Elizabeth Perry keeps a boarding house at Adams Bros. & Payne's brick yard, on the Roanoke river, just at the Franklin street bridge. With her lives her two children, Alice, a little girl, over twelve years of age, and a boy about 15. J. W. Adams, a brother-in-law of Mrs. Perry, together with his wife, lives in the same house. Mrs. Perry is an Englishwoman and came to America several years ago. Her husband is dead, and so she earns a living by keeping boarders.

Around the house is clustered a number of dirty negro shanties, and when the brick yard is running full force these are crowded with a mean-looking set of negroes, who keep up a noise all night. It is a dangerous place to raise up children, but Mrs. Perry had always a house full of white boarders, in whose care she felt safe.

Monday afternoon she sent Alice to East Roanoke to hire a colored woman named Louise Wade. Little Jennie Critzer, a neighbor's daughter, went with Alice. Mrs. Perry told the girls to go and come by the Jefferson street bridge, as it was not so muddy, and to get back before dark.

After the two girls had crossed the river their attention was attracted by a negro man walking on the railroad. He eyed them narrowly and watched after them for some time. He was of a medium height, very black, had on a light gray suit of clothes and wore rubber boots.

Before the girls returned a man named Reynolds was sitting on the bank of the river with a companion fishing. They saw the same negro enter a small unoccupied shanty near the bridge.

When the girls returned it was getting dark. They hurried across the bridge, and proceeded up the bank of the river. They saw the same negro in front of them. He was walking slow, and ever and anon cast his eyes around and looked at the girls.

Just as the girls passed the negro and were preparing to cross a footway over a deep ditch, the negro said:

"Does Mr. Smith live about here?"

"I don't know," said Alice, attempting to move on.

Then the negro seized her. She tried to get loose from his grasp, but the villian [sic] held her like a vise. She called to little Jennie Critzer to run and tell her uncle. Meanwhile she screamed as loudly as she could, and Jennie ran across the board that spanned the ditch and into her own house, a few yards away.

The negro threw his tender little victim down and attempted to outrage her. The child screamed and kicked the brute several times. He attempted to gag her by stuffing her clothing in her mouth. He then threw his weight upon her, thinking he would stop her cries.

Just then someone screamed, a door opened and shut and the negro jumped up and ran in the direction of the bridge.

When Jennie Critzer ran for help she ran into her own house, nearly frightened to death. She gasped that a negro had caught Alice and was killing her. Charles Critzer, her father, ran out and gave the alarm. But just then Alice, who had escaped, ran in the door and cried out:

"Oh, mother, an old black negro tried to kill me."

Mrs. Perry was very much frightened, and, having just recovered from a spell of sickness, it was several hours before she recovered.

Charles Critzer and Mr. Adams, the little girl's uncle, armed themselves and started out. Two other men joined them and the party made a general search for the villian. [sic] They scoured the bank of the river, looked in every shanty, went to the lower brick yard and then about 9 o'clock started to town.

They looked around for some time and reported the fact to several policemen. They told no one else but asked the aid of the officers to help them catch the man. But the police did not seem to appreciate the gravity of the case and made no effort to investigate the matter.

The party then returned and searched until 11 o'clock at night. It is supposed that the negro came to Roanoke and then went back, for Mr. Byrd, who keeps a wagon yard near the bridge, saw a negro who, as near as he remembers, answers the description. Mr. Byrd was coming into the city about 9:30 o'clock and carried an unlighted lantern in his hand.

Between Eigth [sic] and Ninth avenues he met a negro on the board walk. He saw the lantern in Mr. Byrd's hand, and at once jumped to one side and asked what was wanted with him. Byrd told the negro he was not wanted for at that time he knew nothing of the assault. The negro still looked suspicious, and sneaked off. From Mr. Byrd's description he must have been the same negro.

Nothing was seen yesterday of the villian, and the matter was dropped. Mrs. Perry is in hopes the authorities will take it up, and not let the rascal go unpunished.

Alice is a bright, full-faced little girl with auburn hair, and is decidedly pretty. She is large for her age, very intelligent, and describes the negro who assailed her with minute distinctness.