John Brown was born on May 9, 1800, in Torrington, Connecticut, the son of an antislavery tanner. He grew up in Ohio and at age sixteen moved to Massachusetts. After failing to complete training for the ministry, he returned to Ohio and married in 1820. With his first wife, Dianthe Lusk, who died in 1832, and his second wife, Mary Day, Brown became the father of twenty children. He moved often, hoping to find financial success in Pennsylvania and Ohio before settling in New Elba, New York. As often as Brown tried a new business venture he failed, and he spent much of his time fighting off creditors.

Eventually, a quest for Christian moral purity came to consume Brown. As a young man in Ohio, he had an on-again, off-again relationship with various Congregational churches. From 1840 on he was unaffiliated with any church, although his views always remained rooted in the black-and-white theology of Calvinism. In Brown’s view, sin abounded and, in the spirit of the Second Great Awakening, it needed to be eliminated immediately. Convinced that slavery was the nation’s greatest sin, Brown therefore dedicated himself to abolitionism.

As the issue of slavery continued to fuel political passions across the nation in the 1850s, Brown joined five of his sons to fight in “Bleeding Kansas.” The Kansas-Nebraska Act of 1854 established “popular sovereignty,” or the idea that the people of a United States territory had a right to vote to determine whether, as a state, they would allow slavery or not. Predictably, violence erupted as pro- and anti-slavery forces poured into the newly created territory of Kansas. In May 1856, after a series of attacks on anti-slavery settlers in Lawrence, Brown and his sons retaliated by slaughtering five local pro-slavery farmers near Pottawattomie Creek in Franklin County, Kansas (although it remains unclear whether Brown himself took part physically in the killing). “Bloody Pottawattomie,” as the incident became known, signaled a new chapter in the growing crisis over slavery; some antislavery forces were now willing to meet violence with violence.

Despite national headlines generated by the Pottawattomie massacres, Brown recognized that Kansas was still on the margins—of the national consciousness and of the institution of slavery. To strike at the heart of both shortfalls, he set his sights on Virginia. As early as 1857, Brown began to hatch his plan to raid the arsenal at Harpers Ferry, spark a slave rebellion, and establish a new free state governed by a constitution of his own devising. Over the next two years, Brown contacted a number of wealthy abolitionists (including the so-called Secret Six) to recruit followers and fund the purchase of weapons. (The six men included three Bostonians—Samuel Gridley Howe, Theodore Parker, and George Luther Stearns; Massachusetts residents Thomas Wentworth Higginson and Franklin Sanborn; and Gerrit Smith of Peterboro, New York.)

Just two months before the raid, Brown met with the famous anti-slavery activist and former slave Frederick Douglass in an abandoned quarry near Chambersburg, Pennsylvania, to discuss his plans. In the end, Douglass refused to accompany Brown into Virginia, predicting accurately that the plan would end in disaster.

News of John Brown’s raid sent white Southerners into a full-scale panic. Sensitized for decades by rumors of slave insurrections (from Gabriel to Nat Turner) and abolitionist conspiracies, many white Southerners now became even more convinced that a peaceful solution to the problem of slavery was impossible. Those who had already been advocating for secession seized on Brown’s raid to meld abolitionism, slave insurrection, and the Republican Party into one unified threat. The repeated assurances of Northerners like Abraham Lincoln that, while they disapproved of slavery they also condemned John Brown’s actions, fell on deaf ears among white Southerners. Meanwhile, Northern supporters of Brown, such as American essayist, poet, and philosopher Henry David Thoreau, quickly turned him into a symbol of antislavery courage and righteousness; the marching song “John Brown’s Body” would be a favorite among Union soldiers once war had begun. When Lincoln won the presidential election of 1860 and the Southern states began to secede, many writers pointed to Brown’s raid as the moment when the bonds of union began to snap. 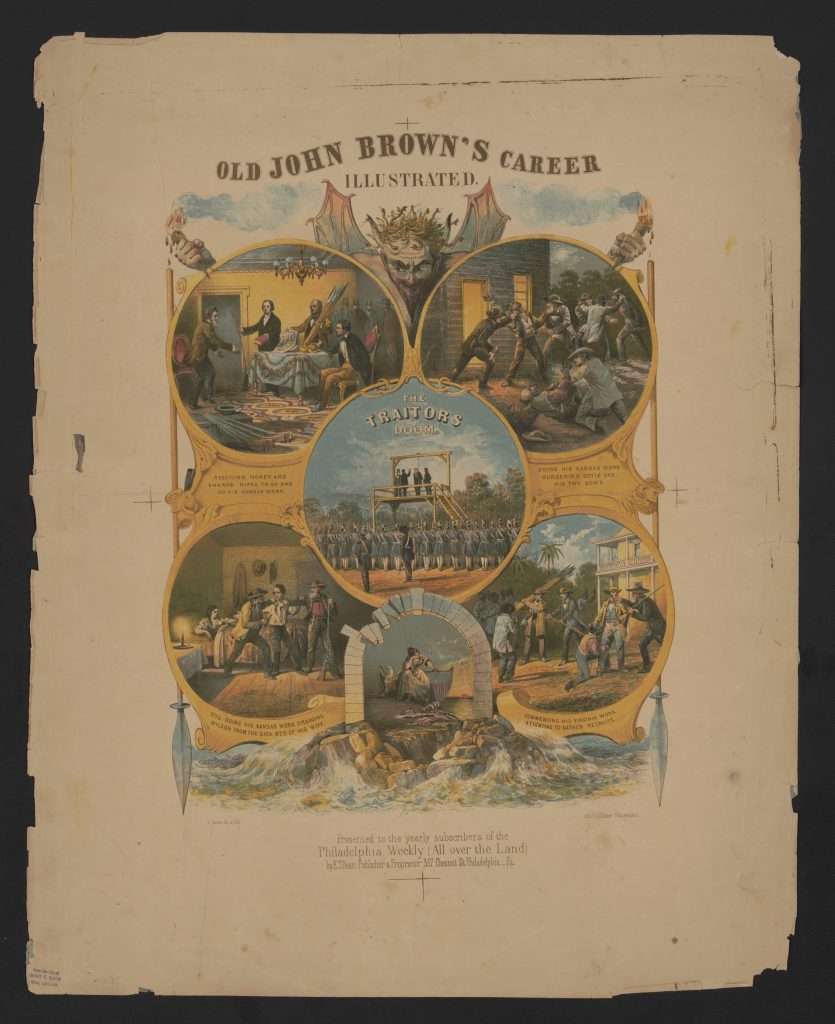 John Brown remains one of the most confounding figures in nineteenth-century American history. Did his willingness to use violence forever compromise his moral authority as an abolitionist? Was he a lawless terrorist or a champion of racial equality? What does it mean that he may have been both? For decades after the Civil War, historians settled into an interpretation of Brown as a madman whose actions a “bungling generation” of politicians (to quote the historian James Garfield Randall) could not prevent from spilling over into civil war. It was not until the turn of the nineteenth century, partly in opposition to new southern segregation laws, that a few biographies appeared defending Brown’s career as an advocate for racial equality.

John Brown became a subject of intense interest again in the 1960s when some African American historians and allied white historians championed Brown as the ultimate civil rights fighter. As the movement mourned martyrs such as Medgar Evers and Martin Luther King Jr., Brown came to represent an earlier example of paying the ultimate price in the ongoing freedom struggle. Brown’s volatile mixture of religious conviction and violence came back into the public consciousness again at the beginning of the twenty-first century as Americans witnessed homegrown terrorists such as Timothy McVeigh, who cast himself as a modern-day John Brown.

RELATED CONTENT
Categories:
Type:
Related SOLs:
MAP
TIMELINE
May 9, 1800
John Brown is born in Torrington, Connecticut.
May 1856
After a series of attacks on antislavery settlers in Lawrence, Kansas, John Brown and his sons retaliate by slaughtering five local pro-slavery farmers near Pottawattomie Creek in Franklin County, Kansas. "Bloody Pottawattomie," as the incident will become known, signals a new level of violence in the growing crisis over slavery.
1857
John Brown begins to hatch his plan to raid the arsenal at Harpers Ferry, spark a slave rebellion, and establish a new free state governed by a constitution of his own devising.
July 3, 1859
Abolitionist John Brown arrives in Harpers Ferry.
August 1859
John Brown meets with the famous antislavery activist and former slave Frederick Douglass in an abandoned quarry near Chambersburg, Pennsylvania, to discuss Brown's plans to raid the arsenal at Harpers Ferry. Douglass refuses to accompany Brown into Virginia, predicting accurately that the plan will end in disaster.
October 16—18, 1859
John Brown and twenty-one raiders attack Harpers Ferry and capture the U.S. Arsenal there in an attempt to start a slave rebellion. Five men are killed (four white and one black). Ninety United States Marines, under the command of Colonel Robert E. Lee, capture Brown, who is
October 17, 1859
A contingent of ninety U.S. Marines, under the command of Colonel Robert E. Lee, arrives in Harpers Ferry at 11 p.m. to put an end to John Brown's raid.
October 18, 1859
U.S. Marines, under Lieutenant Israel Greene, break through the door to "John Brown's Fort" and capture Brown and his raiders. Brown is wounded in the struggle.
December 2, 1859
After a gripping trial held in Charles Town in which John Brown is found guilty of conspiracy, of inciting servile insurrection, and of treason against the state, he is hanged.
FURTHER READING
CITE THIS ENTRY