Edward Wellington Brown was born into slavery in Southampton County, the son of Edward Brown and Euseba Clements Brown. Accounts of his early life are vague and inconsistent. Various reference works give dates of birth ranging from 1860 to 1878, with later birth years given as his life progressed. During his second year as commissioner of revenue for Prince George County in 1888, he signed his reports “Edward Willie Brown.” He may have adopted the middle name himself.

Brown’s father died before the end of the American Civil War (1861–1865). His maternal grandparents, who had acquired some education during slavery, encouraged him to attend a local school at Drewrysville. Brown studied under John Wesley Cromwell, a pioneer black teacher, and after joining the local Baptist church he became close to Joseph Gregory, its pastor and a political activist. The church elected Brown its clerk when he was only twelve years old. With his obvious potential he received encouragement to continue his education. Brown studied at Hampton Normal and Agricultural Institute (later Hampton University) from 1878 to 1880 and then accepted a teaching post in Prince George County.

In addition to teaching, Brown at various times engaged in farming and operated a store. He also entered politics and on May 26, 1887, was elected county commissioner of revenue as part of the successful Republican ticket. The next year Brown abandoned party regularity to support the independent Republican candidacy of John Mercer Langston for Congress, but he returned to the fold in time for reelection as commissioner of revenue, thus becoming one of the few African Americans who held public office into the 1890s. Despite the county’s black majority, white Democrats finally regained control over the ballot box, and Brown lost his bid for reelection in May 1895. On December 27, 1894, he married Nannie Ruffin Allen, a native of Prince George County. They had one daughter and one son, G. W. C. Brown, who became a noted educator. 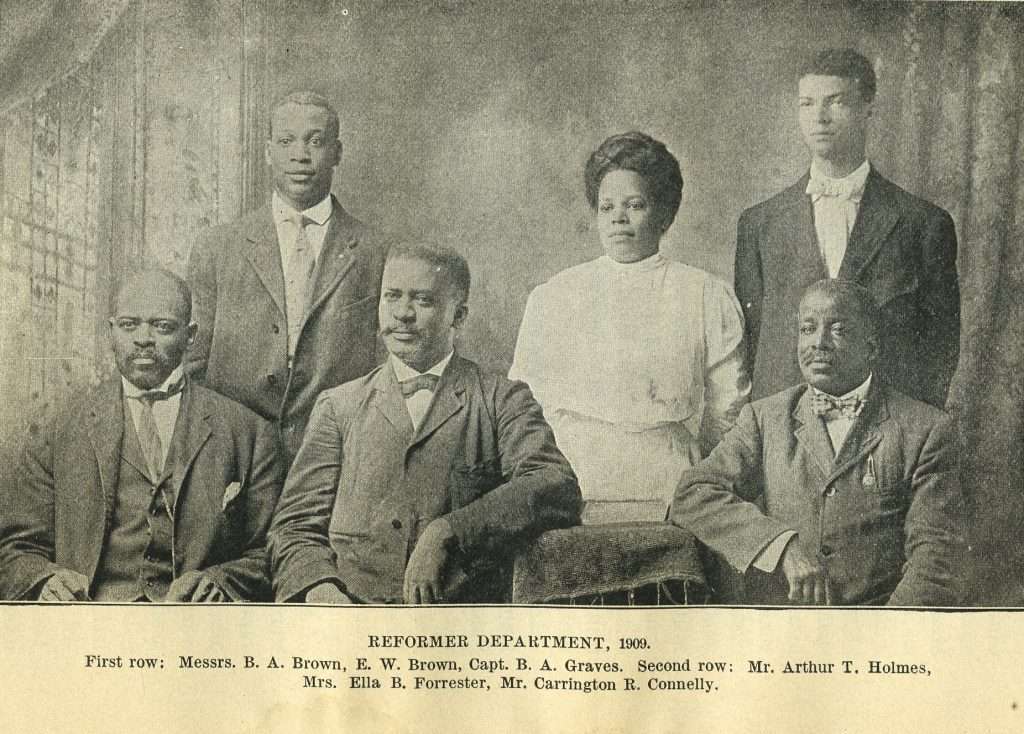 Brown moved his family to Richmond after the 1895–1896 school term concluded. He planned to study medicine but accepted work as a clerk at the savings bank of the Grand Fountain United Order of True Reformers, a fraternal beneficiary organization. Brown had been a charter member of a fountain, as local lodges were called, in Prince George County in 1889. The order sent him to Southampton County, where he organized five fountains. In May 1897 Brown succeeded John H. Smyth as editor of the order’s weekly newspaper, the Reformer, which was published in Richmond.

Only two issues of the four-page paper from Brown’s tenure are known to survive. They show that the activities of the True Reformers filled the news columns. Brown’s editorials boosted the order’s various enterprises while condemning the new segregation laws and anti-Negro prejudice, but his was a conservative editorial voice by comparison with the Richmond Planet. In 1898 the Reformer counted a circulation of 5,800, and even more people probably read it at the order’s many lodges throughout the eastern United States. As did many other small newspapers, the Reformer also operated a printing shop, at which Brown’s brother Benjamin R. Brown worked.

In 1910 the True Reformers’ bank went into receivership, and the order’s finances collapsed. Unlike several of the other officers, Brown was not charged with criminal offenses, but he shared in the general discredit. Members attempting to save the order ousted all of the officers in August 1911, and he left the newspaper. Brown’s wife had died in September 1905, and on October 18, 1906, he married Minnie Odessa White, daughter of the pastor of Mount Carmel Baptist Church, at which Brown was a lay leader. Perhaps his new father-in-law convinced him to become an ordained minister. Brown served a Baptist church at Tappahannock until about 1917, when he became pastor of the First Baptist Church in the Brighton neighborhood of Portsmouth. He guided the congregation through construction of a new brick building in 1918 but left the ministry in the mid-1920s to join his son’s real estate and insurance agency in Norfolk. Brown suffered a stroke and died in Norfolk on September 15, 1929. He was buried in Richmond.