Brent was born in Worcestershire, England, the son of George Brent and Marianna Peyton Brent. His grandfather Richard Brent was lord of Admington and Lark Stoke but lost much of his property during the English Civil Wars because of his Catholicism. With family fortunes declining in Great Britain, George Brent migrated to Maryland between 1660 and 1663. By 1670 he had moved to the Aquia Creek area of Stafford County where his relatives, including his uncle Giles Brent (1600–1672) and aunt Margaret Brent, once major political leaders in Maryland, had created a refuge for other Catholics and acquired substantial amounts of property.

Brent initially practiced law. In December 1670 he was identified as “George Brent of Oquia Creeke, Gent.,” in a record authorizing him to act as an attorney for a London haberdasher who had an interest in land in Westmoreland County. Brent became a successful tobacco planter and raised livestock, owned a sawmill, ran a ferry, and accumulated land and laborers. He became surveyor of Stafford County in 1679 and by 1687 had also become surveyor of Westmoreland County. By 1683 he had become the law partner of William Fitzhugh, a powerful local Protestant. Brent speculated in land on a large scale and joined three London investors in acquiring a 30,000-acre tract known as Brenton, or Brentown, from the Northern Neck proprietors in 1687. The investors hoped to attract French Huguenot settlers and obtained a grant of toleration from James II in 1687, but the venture failed.

In 1677 Brent married Elizabeth Greene, of Bermuda. They had three sons and two daughters before she died in childbirth on March 26, 1686. Brent’s subsequent marriage on March 27, 1687, to Mary Sewall Chandler, a widow with two sons and three daughters, renewed his ties to Maryland’s most prominent Catholic families. They had at least one son and three daughters before she died during childbirth on March 12, 1694. One of his stepsons, Richard Chandler, became a Benedictine priest.

Despite his faith Brent participated in public life in Virginia, where laws against Catholics’ holding office were largely ignored. As Major Brent he was commanding Stafford County’s troop of horse in 1675 when he and George Mason (1629–1686) pursued and killed some Doeg Indians who were accused of murdering settlers, leading indirectly to the outbreak of Bacon’s Rebellion (1676–1677) the next year. Vague references in some of the surviving records of the conflict have resulted in confusion concerning the roles of Brent and his cousin Giles Brent (ca. 1652–1679), but George Brent probably took little or no other part in the rebellion.

In 1681 Brent and Fitzhugh provisioned the Potomac garrison, and three years later Brent led an expedition to defend the inhabitants of Rappahannock River settlements from attacks by the Seneca. He also served as receiver general for the area north of the Rappahannock River in 1683 and was acting attorney general of Virginia from the autumn of 1686 until the spring of 1688. In the latter year Brent won election to the House of Burgesses from Stafford County and was allowed to take his seat even though he declined to take the anti-Catholic oath of supremacy. During the session he was an active and responsible member. 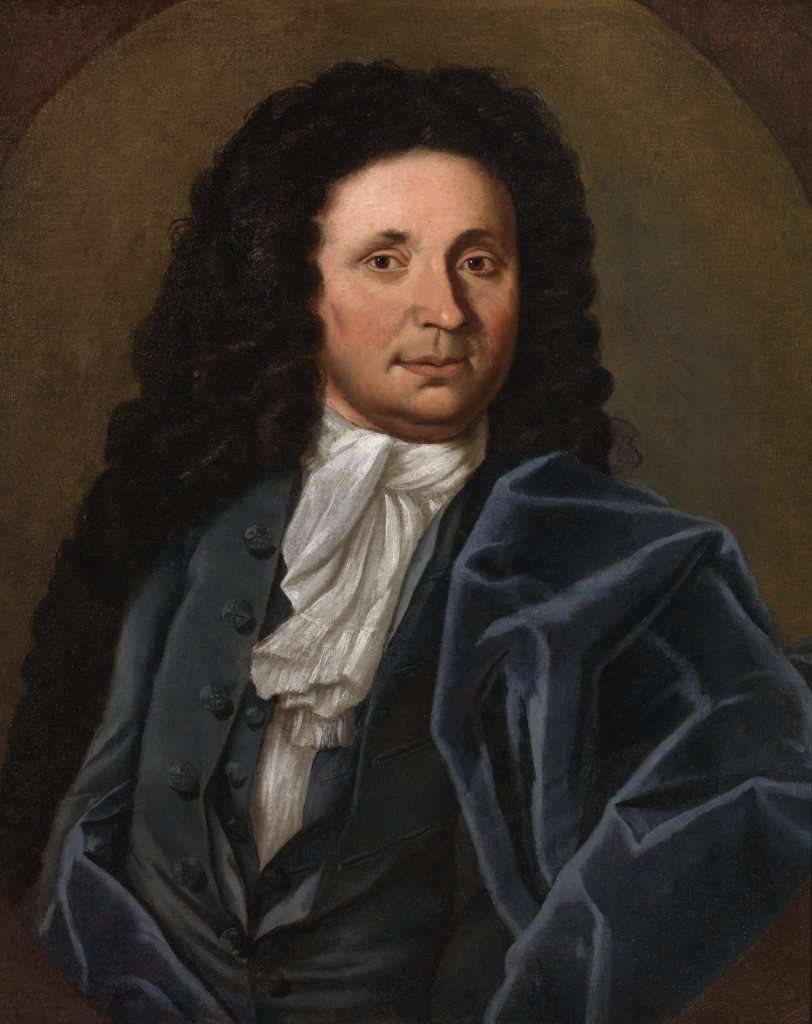 Unfortunately for Brent, events in England in 1688 ended his promising public career. The Glorious Revolution unleashed anti-Catholic feelings in the colonies, and as the most prominent Catholic in Virginia he suffered the consequences. When rumors spread in March 1689 that Brent was conspiring with Maryland Catholics and Indians to kill Protestants, some of Virginia’s leaders ordered him to take refuge at William Fitzhugh’s house for his own safety. In February 1690 a Franciscan priest fleeing persecution in Maryland found shelter with Brent at Woodstock, his residence.

Brent tried to make the best of the situation, proposing to turn the Brenton tract into a refuge for English Catholics, but anti-Catholicism took its toll on him. He never again held public office, and despite efforts by Stafford County leaders to shield him he also apparently lost the right to practice law. Brent did continue serving the Northern Neck proprietors, who appointed him ranger general in charge of defense in 1690. Three years later he and Fitzhugh became joint agents for the proprietors. In that capacity they favored each other and their friends with large tracts of land, enriching themselves but retarding settlement. In this way Brent acquired a great deal of land and owned more than 15,000 acres in Virginia plus land in Maryland and England at the time of his death. 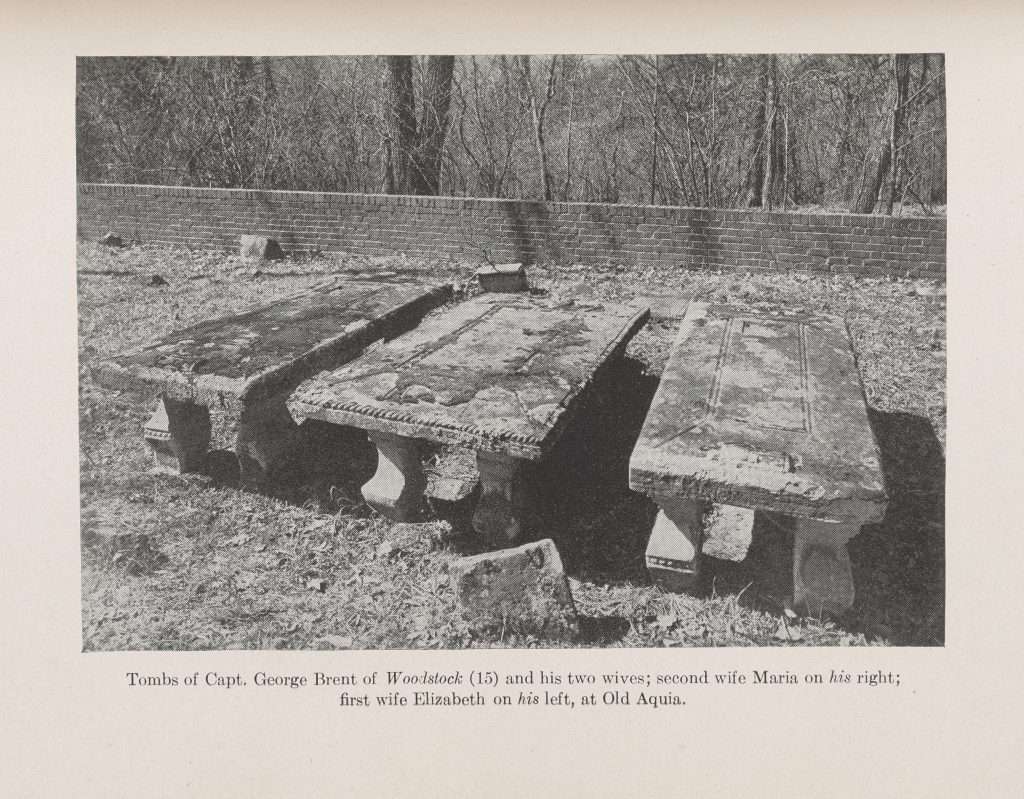 Tombs of George Brent and His Two Wives

Brent acted as an agent for the Northern Neck proprietors at least through the autumn of 1696. George Brent died before September 1, 1700, when his eldest surviving son wrote his own will. He was buried near the bodies of his wives at Aquia Cemetery in Stafford County.

RELATED CONTENT
Categories:
Type:
MAP
TIMELINE
ca. 1640
George Brent is born in Worcestershire, England, the son of George Brent and Marianna Peyton Brent.
1660—1663
At some point during these years, George Brent migrates to Maryland.
1670
By this year, George Brent has moved to the Aquia Creek area of Stafford County where his relatives had created a refuge for Catholics.
1675
George Brent, commander of Stafford County's troop of horse, and George Mason (1629—1686) pursue and kill some Doeg Indians who were accused of murdering settlers, leading indirectly to the outbreak of Bacon's Rebellion the next year.
1677
George Brent marries Elizabeth Greene, of Bermuda. They will have three sons and two daughters.
1679
George Brent becomes surveyor of Stafford County.
1681
George Brent and William Fitzhugh provision the Potomac garrison.
1683
By this year, George Brent has become the law partner of William Fitzhugh.
1684
George Brent leads an expedition to defend the inhabitants of Rappahannock River settlements from attacks by the Seneca.
1686—1688
George Brent is acting attorney general of Virginia.
March 26, 1686
George Brent's wife, Elizabeth Greene, dies in childbirth.
1687
George Brent becomes surveyor of Westmoreland County.
March 27, 1687
George Brent marries Mary Sewall Chandler, a widow with two sons and three daughters. They will have at least one son and three daughters.
1688
George Brent wins election to the House of Burgesses from Stafford County and is allowed to take his seat even though he declines to take the anti-Catholic oath of supremacy. During the session he is an active and responsible member. Later this year, events in England end his career.
1690
The Northern Neck proprietors appoint George Brent ranger general in charge of defense.
March 12, 1694
George Brent's wife, Mary Sewall Chandler dies during childbirth.
September 1, 1694
Sometime before this date, George Brent dies. He is buried at Aquia Cemetery in Stafford County.
FURTHER READING
CITE THIS ENTRY