Bouldin was born on May 24, 1830, in Charlotte County, the son of James Wood Bouldin, a member of the House of Representatives, and his third wife, Almeria Read Kennon Bouldin. He was educated at private schools and entered the Virginia Military Institute in 1848 but withdrew after nineteen months. Bouldin returned to Charlotte Court House to practice law. He served as deputy sheriff and in 1852 as commonwealth’s attorney. On March 9, 1855, Bouldin married Ella Fuqua. They had four sons and two daughters.

Bouldin left his law practice to enlist in the Confederate cavalry on May 15, 1861, but poor eyesight led to his discharge that December. He moved to Danville shortly after the war. In the autumn of 1865 Bouldin bought the Danville Appeal. He changed its name to the Danville Times and edited the paper as a Democratic weekly until about 1894, when severe illness forced him to discontinue it. In 1877 the paper had a weekly circulation of more than 900, and in 1885 Bouldin boasted of its extensive circulation in both Virginia and North Carolina. Too few copies of the Danville Times are extant to document or thoroughly describe his editorial career.

Illustrated Sketch Book of Danville, Virginia; Its Manufactures and Commerce

At the time of his death the Danville Register praised Bouldin for a service he had rendered to the city and the Democratic Party, “which ever afterwards caused him to be held in grateful remembrance.” The obituary was almost certainly recalling the period of local Readjuster rule from 1882 to 1883 that terminated with the so-called Danville Riot of November 3, 1883, during which four blacks were killed. The episode put an end to Readjuster political power in Danville and served as a campaign rallying point that restored white Democrats to power in Virginia and led to the downfall of the Readjusters throughout the state. By the turn of the century many white writers regarded the Readjusters’ biracial coalition as anathema, erroneously portrayed the period of Readjuster rule as part of Reconstruction (which had ended in Virginia in January 1870), and characterized the brief period when four African Americans sat on Danville’s twelve-member city council as a period of “Negro domination.” An account of the riot incorporating this interpretation filled seventeen pages of Edward Pollock’s 1885 Sketch Book of Danville, a book promoting the city as a business center.

The precise nature of Bouldin’s service to the white Democratic Party is unclear, but he served as one of three secretaries of the so-called Committee of Forty, put together after the riot to justify the viewpoint of local Democrats. As editor of the Danville Times Bouldin presumably both spread the word that the riot had been nothing more than a deplorable street fight that got out of hand and successfully worked for the downfall of the local Readjusters and the rise to power of white supremacist Democrats. 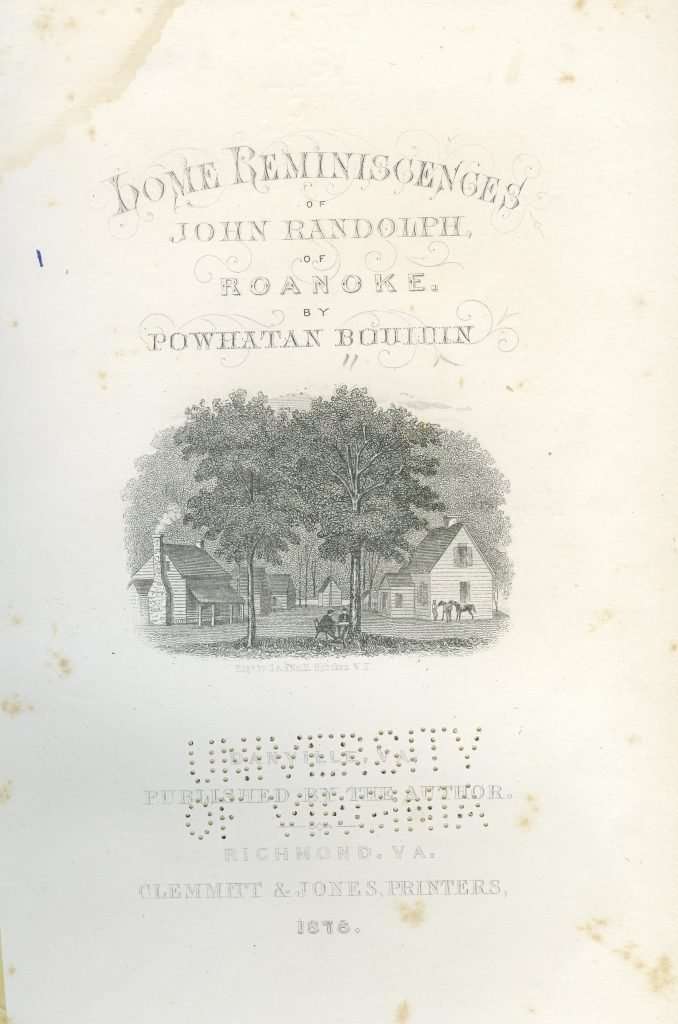 Bouldin also wrote two books. Home Reminiscences of John Randolph of Roanoke (1878) depicts Charlotte County’s most famous son, as recalled by Randolph’s neighbors and acquaintances, including Bouldin’s father. Old Trunk or Sketches of Colonial Days (1888) uses the contents of a trunk discovered by the author’s aged aunt to illuminate his ancestors and the colonial customs of Charlotte County. Both volumes belong to a popular genre of local history that celebrated the customs and local notables of a better and bygone era.

Bouldin died at the residence of his son-in-law in Danville on March 8, 1907, and was buried in Green Hill Cemetery in that city.