Bolling was born into slavery on January 10, 1819, in Cumberland County, the son of Olive Bolling. According to family tradition his father was Lenaeus Bolling, a white landowner who represented Buckingham County in the House of Delegates. Bolling was owned by the prominent Eppes family and he was probably a body servant of the Buckingham County physician Willie J. Eppes. Bolling also became an able mechanic and frequently supervised the work of other slaves. Such was his skill at building and farm management that Eppes frequently permitted him to hire out to other slaveholders. By 1857 Bolling and his brother had provided the money to enable their mother to live as if free. Bolling is also said to have purchased his own freedom before the Civil War, but his name does not appear in Cumberland County’s free population census of 1860.

At an undetermined date Bolling married a woman from Halifax County, North Carolina, named Ellen, whose surname may have been Gantt or Munford. The eldest of their two sons and four daughters was born in 1847 and the last was born about 1864. Hardworking and thrifty, Bolling began to acquire property after the Civil War. In 1866 he obtained two lots on Madison Street in Farmville from John W. Eppes. Bolling eventually added five other pieces of property in Farmville, and in 1867 he bought a lot in Lynchburg. In 1874 he purchased an interest in 602 acres of farmland in Cumberland County, and by 1878 he had clear rights to the property, where he later raised tobacco. Bolling eventually amassed more than 1,000 acres in Cumberland County. 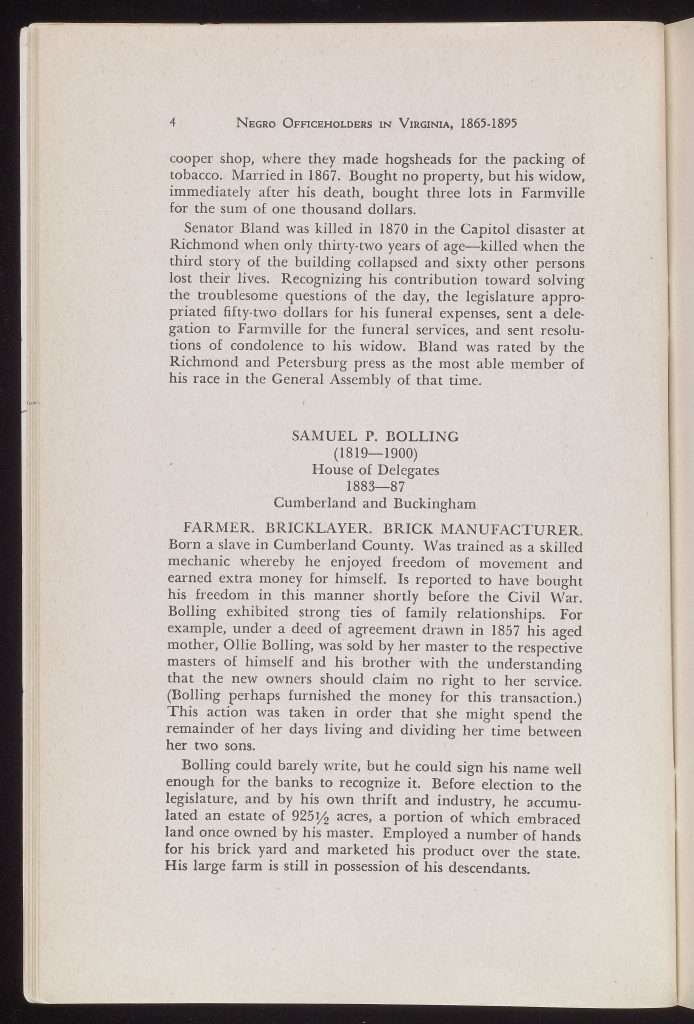 The 1870 census shows Bolling and his family living in Cumberland County. He was working as a carpenter. He had established a brickyard in nearby Farmville by 1874 and soon was manufacturing three widely marketed varieties of brick. Bolling’s business eventually employed about fifteen workers and operated six months of the year, making from 200,000 to 300,000 bricks annually. He constructed many of the buildings in Farmville and the surrounding countryside, and by 1880 he and his family, including his mother, had moved to a house on Madison Street in Farmville. Bolling’s wife was not enumerated in that year’s census and may have died by that time.

Bolling’s fame as a farmer, builder, and brickmaker spread. His name appeared on the front page of the Cleveland Gazette in an October 23, 1886, article describing the advances of African Americans in business. The article estimated that the value of his brick-making operation and fine country house was $40,000. When Bolling composed his will in 1889 his estate included a house and three lots in Farmville and the 600-acre farm and house in Cumberland County, plus another 100 acres and a dwelling in the county at which one of his sons then resided. Such industry was characteristic of the family. Bolling’s brother was reportedly a successful builder in the Lynchburg area during the 1870s and 1880s.

About 1880 Bolling joined the Readjusters, who proposed to scale down the principal and interest to be paid on the antebellum state debt in order to pay for the new public school system and other public projects. Comprising a fragile alliance of poor whites, Republicans, African Americans, and a few disgruntled Conservatives, the Readjuster Party attempted to expand its appeal by promising blacks a greater role in the state’s affairs. Bolling became active at the county level, working at the polls as an election judge from 1880 to 1882 and in 1884 and as election commissioner in 1885.

In May 1883 Bolling ran as a Readjuster and won a one-year term on the Cumberland County board of supervisors. His election provoked criticism from the Democratic Farmville Journal, which complained that he lacked adequate education to manage the financial affairs of the county competently. Nevertheless, the voters reelected Bolling supervisor in May 1884. He also encouraged his sons’ political activities. Phillip S. Bolling was elected to the House of Delegates from Buckingham and Cumberland counties in 1883, although he soon lost his seat on a technicality, and in 1883 and 1884 Lewis R. Bolling served as an election judge.

In October 1885 Bolling campaigned for his son’s former seat in the House of Delegates from Buckingham and Cumberland counties. Although the Democrats had surged back into power, Bolling narrowly defeated his Democratic opponent by 176 votes. He served on three standing committees: Claims, Manufactures and Mechanic Arts, and Retrenchment and Economy. Although Readjuster power was ebbing, Bolling still enjoyed the support of the party’s leader, William Mahone. In 1887 Bolling ran for the state senate seat representing Amelia, Cumberland, and Prince Edward counties. In July he wrote to Mahone that he did not think his opponent, Nathaniel M. Griggs, another African American, stood any chance. By August, however, Bolling was complaining that “they are bleeding me on every turn” but that given enough money he could prevail. Mahone unexpectedly threw his support to Griggs, but Bolling stuck it out, campaigning as an Independent Republican. Griggs beat him by a vote of 2,740 to 1,513. Bolling worked in behalf of John Mercer Langston‘s successful 1888 congressional campaign, and he continued to participate in Republican Party politics during the 1890s.

In his later years Bolling sold part of his property in Cumberland County to the area’s poorer African Americans. He and his daughters also contributed land and money for a normal and industrial school. Later named in Bolling’s memory, the school was situated on land near where he had once worked as a slave. Bolling was also active in the Mount Nebo Baptist Church, serving as deacon, trustee, and treasurer. From 1893 until his death, Bolling served as one of the curators responsible for overseeing the land-grant educational fund at Hampton Normal and Agricultural Institute (later Hampton University). His daughter Eliza Bolling was well known in Cumberland and Prince Edward counties for her efforts to promote Booker T. Washington‘s philosophy of self-help and self-sufficiency. An 1881 Hampton graduate who taught at Tuskegee Institute in Alabama from 1890 to 1891, she operated small rural schools around the Bolling farm for little or no pay while helping to manage her father’s tobacco farm and assisting with the brickyard business.

In December 1899 Bolling became ill, and although he experienced little pain he soon became too weak to stand or feed himself. On February 8, 1900, Bolling died at his Cumberland County farm. The funeral service was conducted at the farm, and he was buried there.