Bolling was born into slavery sometime around 1849 in Buckingham County, the son of Samuel P. Bolling and Ellen Bolling, whose surname may have been Gantt or Munford. About 1857 Samuel P. Bolling purchased the freedom of his mother and possibly himself and other family members from the prominent Eppes family of Buckingham and Cumberland counties.

By 1870 the family had moved to Cumberland County, where Phillip Bolling worked as a farmer. During the 1860s his father had purchased lots in Farmville and Lynchburg, and in 1872 Bolling acquired the Lynchburg property from him. He also worked at his father’s brickyard in Farmville. By 1880 both men had moved to Farmville, where that summer’s census identified them as brick masons. 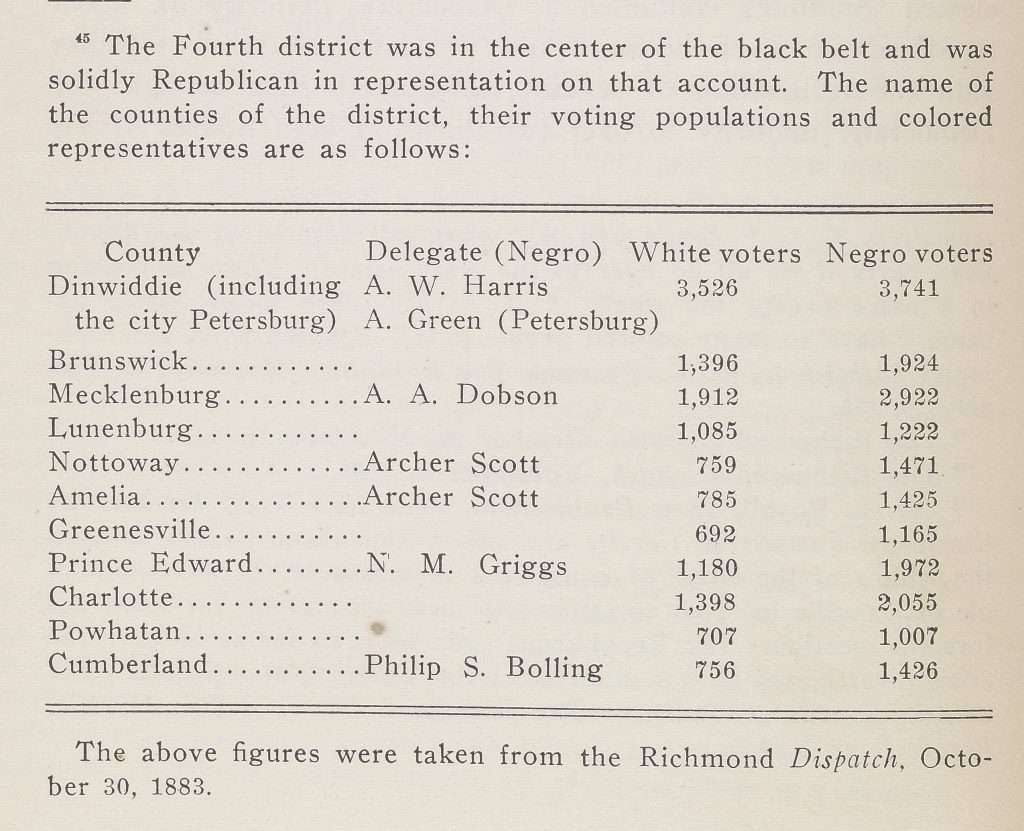 African American Delegates Elected from the Fourth District in 1883

Encouraged by his father’s success in local politics, Bolling ran for the House of Delegates in the autumn of 1883 in the district comprising Buckingham and Cumberland counties. He campaigned as a Readjuster against John O. Reynolds, a Democrat and Funder. On election day the Democrats posted notices at voting precincts asserting that Bolling was a resident of Prince Edward County and therefore ineligible to represent Buckingham and Cumberland counties. Voters ignored the warning and elected Bolling by 538 votes. Two days later the local electoral board affirmed Bolling’s election and refused to consider the Democratic challenge to his eligibility.

The General Assembly convened on December 5, 1883. Bolling was appointed to the Committees on Banks, Currency, and Commerce, on Officers and Offices at the Capitol, and on Rules. The Democrats again challenged his election, however, and on January 22, 1884, the Democratic majority of the Committee of Privileges and Elections rejected evidence that Bolling had been registered to vote in Cumberland County, had voted there from 1881 to 1883, and had served as a juror there as recently as June 1883. Because he had been working at a brick kiln in Prince Edward County before the election, the committee ruled that he was “not an actual resident” of the district from which he had been elected and therefore found him ineligible. Noting that voters had cast ballots for Bolling even after being warned of his ineligibility, the committee declined to award his vacated seat to Reynolds, choosing instead to hold a special election on February 13, 1884. On that date Reynolds lost to Edmund W. Hubard, a Readjuster who had just lost his seat in the Senate of Virginia to another Democratic challenge. A sympathetic newspaper account of the Readjuster victory described Bolling’s defeat and Hubard’s comeback under the headline “Retribution.” Bolling no doubt felt somewhat mollified by this outcome and by his father’s election in 1885 to represent Buckingham and Cumberland counties in the House of Delegates. Because their names were similar and some documents confused P. S. Bolling with his father S. P. Bolling, the election of Phillip S. Bolling to the House of Delegates and his brief service there have not been included in standard references on the participation of African Americans in Virginia politics late in the nineteenth century.

Bolling may have married and had one or more children before his entry into politics, but he was listed as single on the license for his marriage on March 31, 1887, to twenty-four-year-old Harriet T. Jackson, of Prince Edward County. Two months later, on May 26, he was elected to a two-year term on the Prince Edward County board of supervisors. At that time he was working as a mechanic. Bolling later developed a debilitating mental illness, and on March 18, 1892, he was admitted to the Central Lunatic Asylum in Petersburg suffering from what was diagnosed as acute mania. He was also suffering from lung disease, and on April 18, 1892, Bolling died at the asylum of consumption, or tuberculosis.