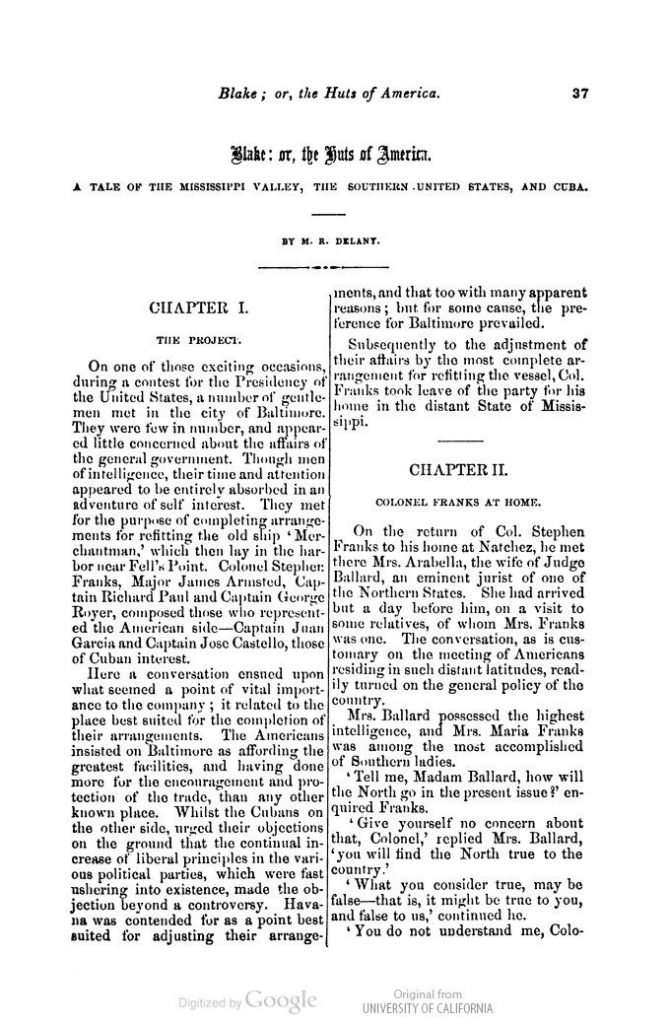 On the return of Col. Stephen Franks to his home at Natchez, he met there Mrs. Arabella, the wife of Judge Ballard, an eminent jurist of one of the Northern States. She had arrived but a day before him, on a visit to some relatives, of whom Mrs. Franks was one. The conversation, as is customary on the meeting of Americans residing in such distant latitudes, readily turned on the general policy of the country.

Mrs. Ballard possessed the highest intelligence, and Mrs. Maria Franks was among the most accomplished of Southern ladies.

‘Tell me, Madam Ballard, how will the North go in the present issue?’ enquired Franks.

‘Give yourself no concern about that, Colonel,’ replied Mrs. Ballard, ‘you will find the North true to the country.’

‘What yon consider true, may be false—that is, it might be true to you, and false to us,’ continued he.

‘You do not understand me, Colo- 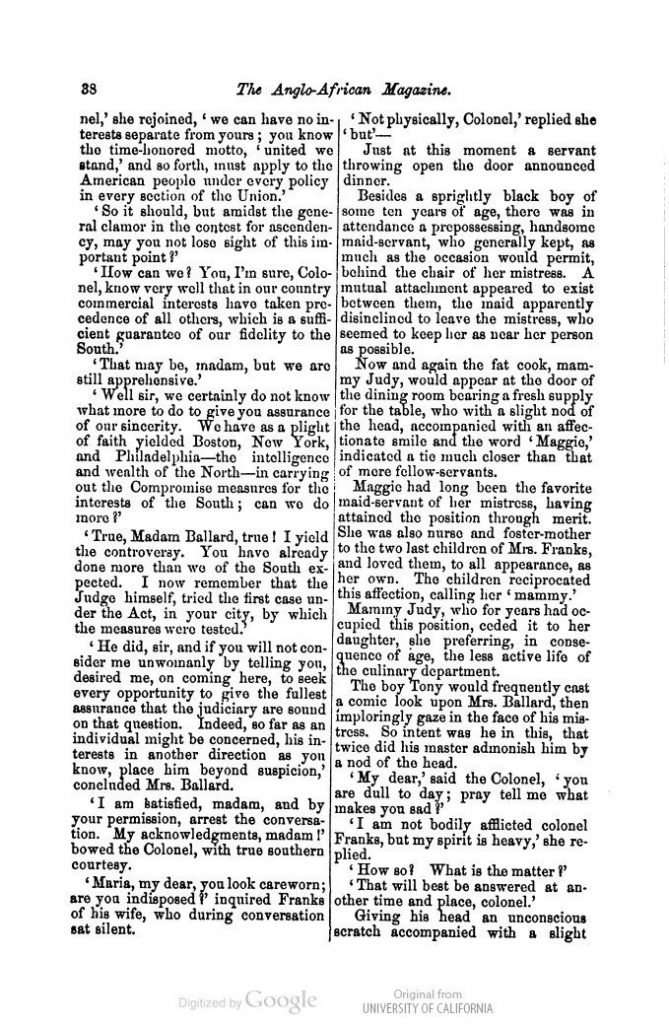 nel,’ she rejoined, ‘we can have no interests separate from yours; you know the time-honored motto, ‘united we stand,’ and so forth, must apply to the American people under every policy in every section of the Union.’

‘So it should, but amidst the general clamor in the contest for ascendency, may you not lose sight of this important point?’

‘How can we? You, I’m sure, Colonel, know very well that in our country commercial interests have taken precedence of all others, which is a sufficient guarantee of our fidelity to the South.’

‘That may be, madam, but we are still apprehensive.’

‘Well sir, we certainly do not know what more to do to give you assurance of our sincerity. We have as a plight of faith yielded Boston, New York, and Philadelphia—the intelligence and wealth of the North—in carrying out the Compromise measures for the interests of the South; can we do more?’

‘True, Madam Ballard, true! I yield the controversy. You have already done more than we of the South expected. I now remember that the Judge himself, tried the first case under the Act, in your city, by which the measures were tested.’

‘He did sir, and if you will not consider me unwomanly by telling you, desired me, on coming here, to seek every opportunity to give the fullest assurance that the judiciary are sound on that question. Indeed, so far as an individual might be concerned, his interests in another direction as you know, place him beyond suspicion,’ concluded Mrs. Ballard.

‘I am satisfied, madam, and by your permission, arrest the conversation. My acknowledgments, madam!’ bowed the Colonel, with true southern courtesy.

‘Maria, my dear, you look careworn; are you indisposed?’ inquired Franks of his wife, who during conversation sat silent.

‘Not physically, Colonel,’ replied she ‘but’—

Just at this moment a servant throwing open the door announced dinner.

Besides a sprightly black boy of some ten years of age, there was in attendance a prepossessing, handsome maid-servant, who generally kept, as much as the occasion would permit, behind the chair of her mistress. A mutual attachment appeared to exist between them, the maid apparently disinclined to leave the mistress, who seemed to keep her as near her person as possible.

Now and again the fat cook, mammy Judy, would appear at the door of the dining room bearing a fresh supply for the table, who with a slight nod of the head, accompanied with an affectionate smile and the word ‘Maggie,’ indicated a tie much closer than that of mere fellow-servants.

Maggie had long been the favorite maid-servant of her mistress, having attained the position through merit. She was also nurse and foster-mother to the two last children of Mrs. Franks, and loved them, to all appearance, as her own. The children reciprocated this affection, calling her ‘mammy.’

Mammy Judy, who for years had occupied this position, ceded it to her daughter, she preferring, in consequence of age, the less active life of the culinary department.

The boy Tony would frequently cast a comic look upon Mrs. Ballard, then imploringly gaze in the face of his mistress. So intent was he in this, that twice did his master admonish him by a nod of the head.

‘My dear,’ said the Colonel, ‘you are dull to day; pray tell me what makes you sad?’

‘I am not bodily afflicted colonel Franks, but my spirit is heavy,’ she replied.

‘That will best be answered at another time and place, colonel.’

Giving his head an unconscious scratch accompanied with a slight 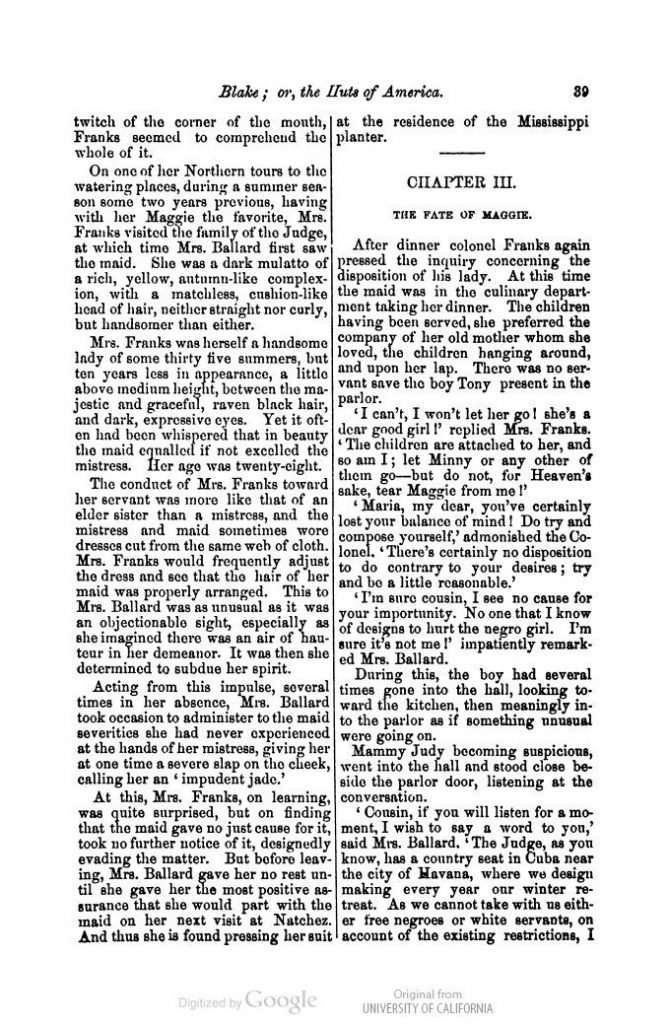 twitch of the corner of the mouth, Franks seemed to comprehend the whole of it.

On one of her Northern tours to the watering places, during a summer season some two years previous, having with her Maggie the favorite, Mrs. Franks visited the family of the Judge, at which time Mrs. Ballard first saw the maid. She was a dark mulatto of a rich, yellow, autumn-like complexion, with a matchless, cushion-like head of hair, neither straight nor curly, but handsomer than either.

Mrs. Franks was herself a handsome lady of some thirty five summers, but ten years less in appearance, a little above medium height, between the majestic and graceful, raven black hair, and dark, expressive eyes. Yet it often had been whispered that in beauty the maid equalled if not excelled the mistress. Her age was twenty-eight.

The conduct of Mrs. Franks toward her servant was more like that of an elder sister than a mistress, and the mistress and maid sometimes wore dresses cut from the same web of cloth. Mrs. Franks would frequently adjust the dress and see that the hair of her maid was properly arranged. This to Mrs. Ballard was as unusual as it was an objectionable sight, especially as she imagined there was an air of hauteur in her demeanor. It was then she determined to subdue her spirit.

Acting from this impulse, several times in her absence, Mrs. Ballard took occasion to administer to the maid severities she had never experienced at the hands of her mistress, giving her at one time a severe slap on the cheek, calling her an ‘ impudent jade.’

At this, Mrs. Franks, on learning, was quite surprised, but on finding that the maid gave no just cause for it, took no further notice of it, designedly evading the matter. But before leaving, Mrs. Ballard gave her no rest until she gave her the most positive assurance that she would part with the maid on her next visit at Natchez. And thus she is found pressing her suit at the residence of the Mississippi planter.

RELATED CONTENT
Categories:
Type:
MAP
TIMELINE
January 1859
Martin R. Delany writes the serialized novel, Blake; or, The Huts of America. In this excerpt, he depicts a dinner conversation between a Mississippi planter, his wife, and a visitor from the North. During dinner, they discuss contemporary political issues, including slavery.
CITE THIS ENTRY