John Durburrow Blair was born on October 15, 1759, at Fagg’s Manor, Chester County, Pennsylvania, one of twelve children, of whom four sons and three daughters reached adulthood. His parents were John Blair, a Presbyterian minister and teacher, and Elizabeth Durburrow Blair. He was probably educated in his father’s academy at Fagg’s Manor, after which he entered the College of New Jersey (now Princeton University), where his father had been a professor of divinity from 1769 to 1771. Blair graduated from the college in 1775 and for the next five years taught school in New Jersey or New York. He may also have served briefly in the Revolutionary War. 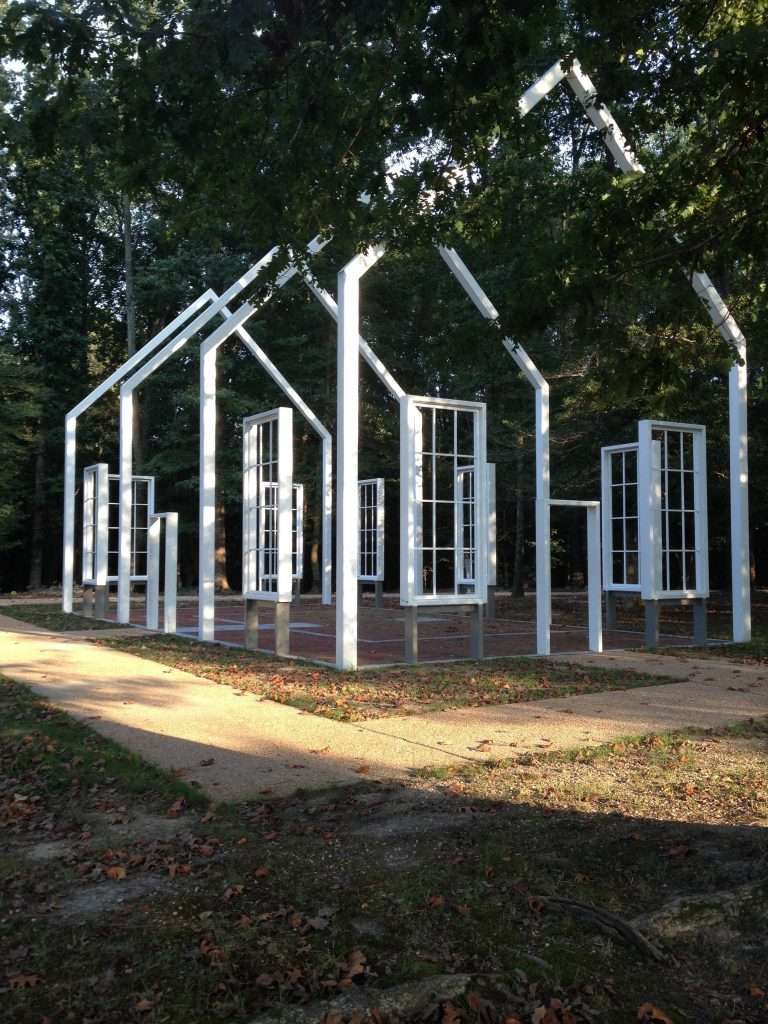 Blair became a teacher at Washington-Henry Academy in Hanover County in 1780. He taught there for ten years and served as president from January 14, 1782, to December 3, 1790. He also studied theology, and on October 28, 1784, the Hanover Presbytery licensed him to preach. He served as minister of Pole Green Church in Hanover County from sometime in 1785 until 1821. After he moved to Richmond about the end of 1790 he conducted services at Pole Green Church only once or twice a month. The Presbyterians of Richmond were not organized as a church, and Blair required them to attend services at Pole Green for the performance of the sacraments.

On March 4, 1785, Blair married Mary Winston, a daughter of Geddes Winston, one of the wealthiest men in Richmond. They had two daughters and six sons. Blair enjoyed the social pleasures and comforts to which his marriage introduced him. A jovial and fun-loving man, he took a lively and conspicuous part in Richmond’s social life. He also conducted small academies for boys and for girls in Richmond, but in 1796 he declined an invitation to become president of Hampden-Sydney College. He was a founder of the Bible Society of Virginia in 1813 and served as its second president. Blair was elected president of the Richmond Library Society in 1814. 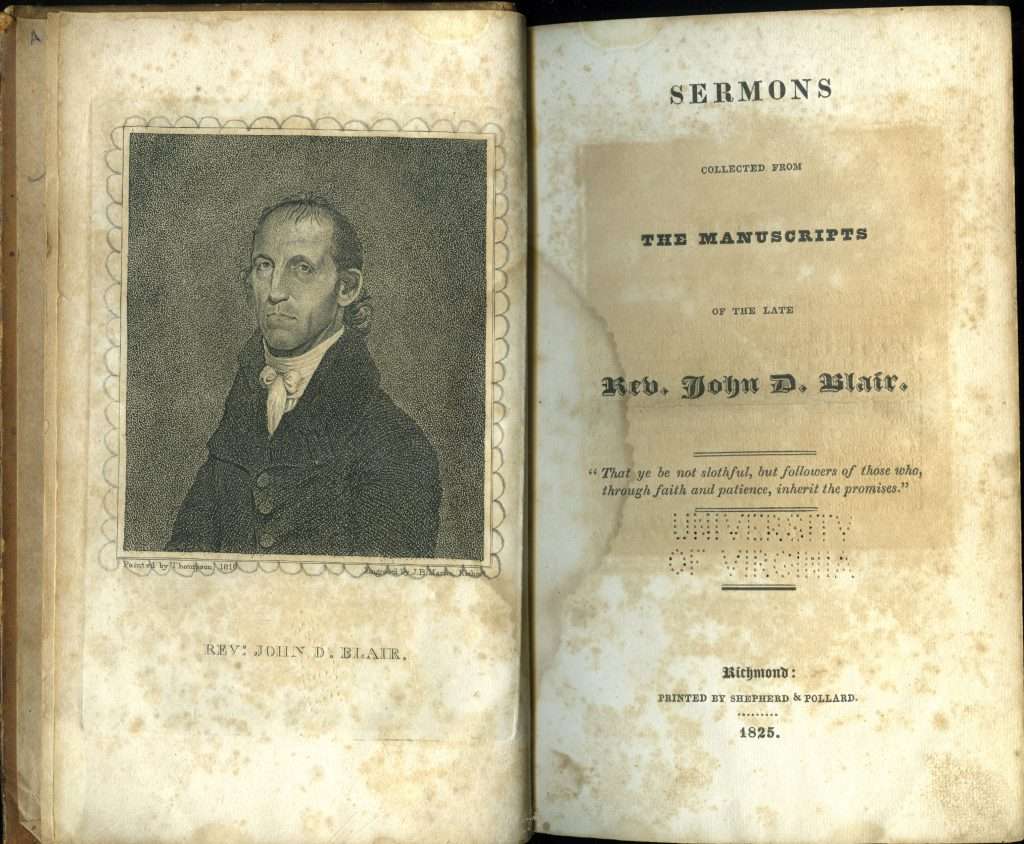 Sermons Collected from the Manuscripts of the Late Rev. John D. Blair.

Blair was an urbane rationalist and a popular minister who often departed from his prepared texts and spoke informally and wittily from the pulpit. On December 2, 1799, the House of Delegates elected him its chaplain and reelected him in 1800 and 1801, but a Baptist minister, John Courtney, was elected chaplain in 1802. Blair’s sermon, “On the Death of Washington,” preached at the request of the House of Delegates in January 1800, was one of the few of his sermons published during his life. After his death his widow arranged for the publication of a substantial volume, Sermons Collected from the Manuscripts of the Late Rev. John D. Blair (1825).

For many of his years in Richmond, Blair preached to the Presbyterians of the city in the Henrico Parish Church or in the Virginia Capitol, alternating Sunday services with John Buchanan, the Episcopal pastor of the parish. Blair and Buchanan became fast friends, and the unmarried Buchanan spent much time as a guest in Blair’s household. They shared a taste for puns and for writing doggerel verse, and they did not let their differences over forms of church governance disturb their friendship. Both men preached religious tolerance and advocated the use of music in church services, which placed them at odds with some of the Baptists and Methodists of the city. They were the only clergymen who belonged to the Richmond Quoit Club, which met for drink and games and fellowship at Buchanan’s farm. 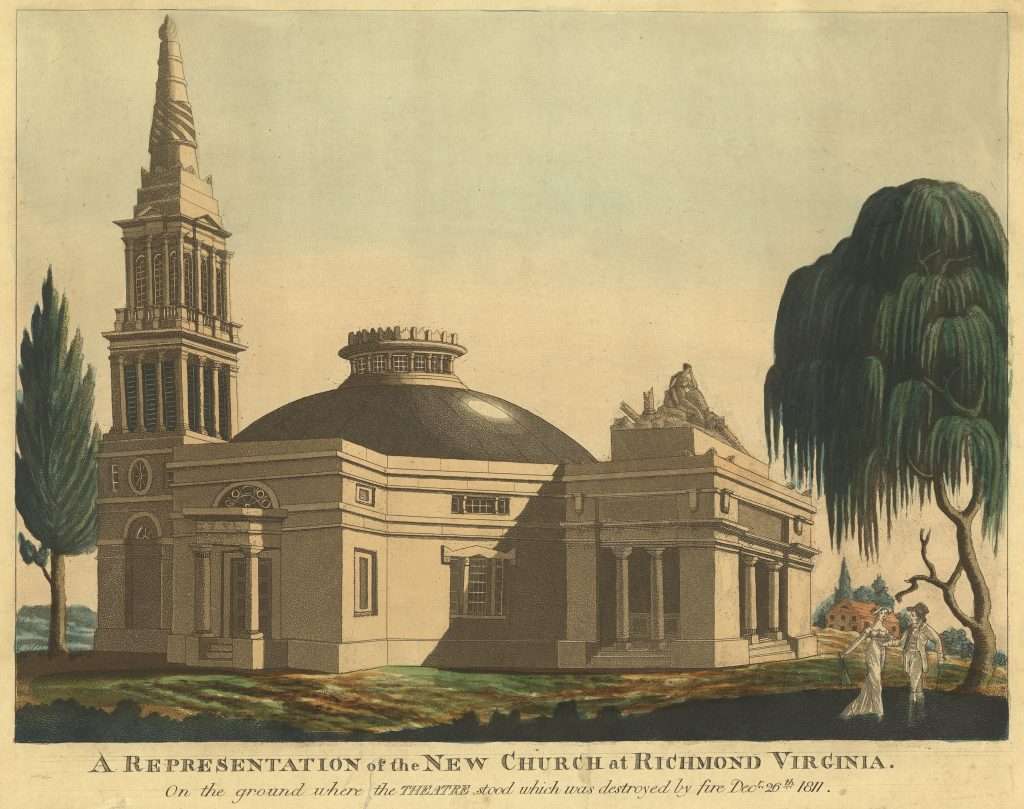 A Representation of the New Church at Richmond Virginia.

Following the fire in the Richmond Theatre on December 26, 1811, that killed seventy-six people, Blair and Buchanan led the movement to construct Monumental Church on the site of the disaster, probably with the hope that they and their congregations would share the church. The more numerous Episcopalians eventually appropriated the building for themselves, an action that finally led the Presbyterians to erect the first Presbyterian church in Richmond, which was completed in 1821.

The reputation of Blair and Buchanan as friends and as joint representatives of an era of genial tolerance in ecclesiastical matters was well known to their contemporaries and was embellished many years later in George Wythe Munford‘s The Two Parsons (1884). Because of the winning personalities of the two principals and Munford’s nostalgic prose style, the book’s interpretation of Richmond’s early history became popular. Blair died at his home in Richmond on January 10, 1823, about three weeks after Buchanan had died, and was buried in Shockoe Cemetery.