Binga was born on June 1, 1843, in Amherstburg, Canada West, where his father and mother had fled to escape slavery. He was the eldest of two sons and a daughter born to Anthony Binga and Rhoda Story Binga. His father was pastor of the black Baptist church in Amherstburg and a leader among fugitives from slavery. Binga attended the local school and, aspiring to become a physician, received private tutoring in Latin and anatomy. His parents could not pay for further education, but he accepted a scholarship covering tuition and gladly subsisted on meager fare while working his way through King’s Institute at Buxton, Canada West, a town founded by the white abolitionist William King.

A. Binga Jr., as he signed his name, completed his studies in 1865 and the following year accepted a call to Atchison, Kansas, as a schoolteacher. He fell ill in Kansas and returned to Canada where, in February 1867, he experienced religious conversion and was baptized in the frigid waters of a nearby river. Eight months later the Canadian Anti-Slavery Baptist Association ordained him, and he was quickly called to the Albany Enterprise Academy in Athens County, Ohio, where he became both a preacher and a principal. On December 2, 1869, Binga married Rebecca L. Bush, of Xenia, Ohio, the daughter of a Baptist minister. They had two daughters. Binga discovered that to keep the school in Albany alive he had to solicit donations from white philanthropists, which required him to travel, interfering with what he considered his more important work as a preacher. He resigned about 1871 and brought his family back to Canada, seeking a more suitable field. 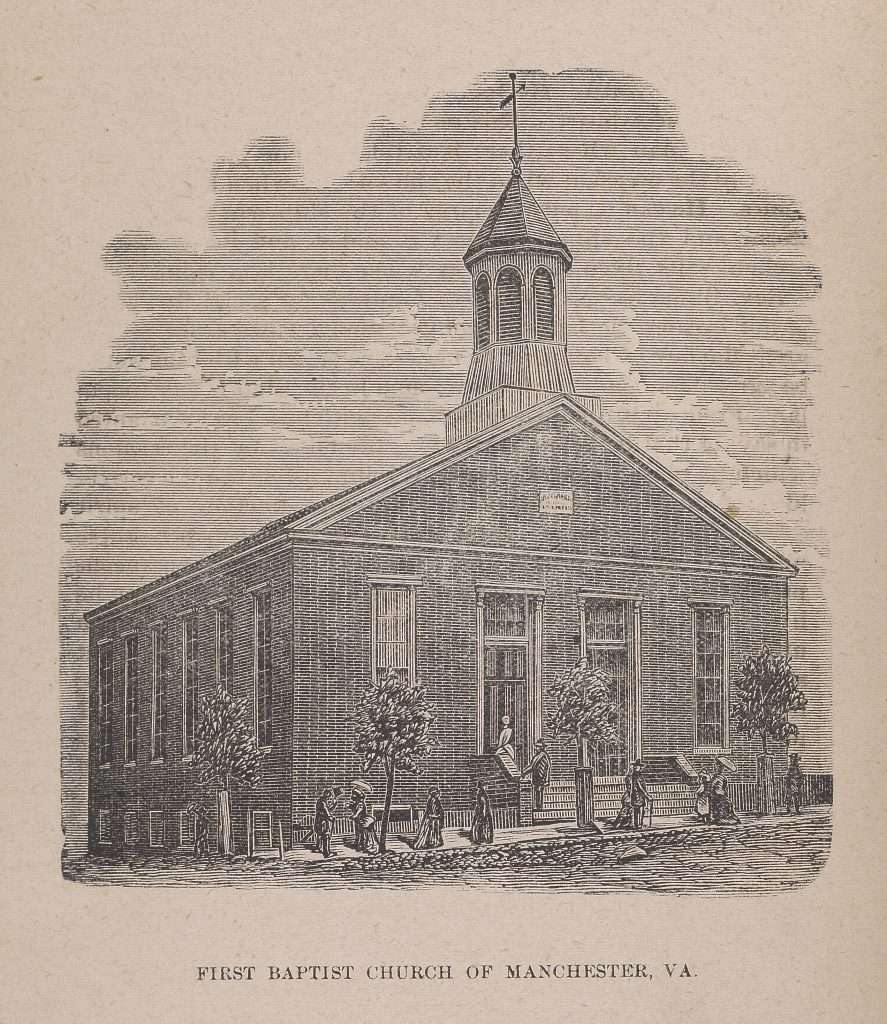 In January 1872 Binga and his family moved to Richmond. He was welcomed there by William Troy, a Virginia-born free black abolitionist who had lived in Amherstburg during the 1850s and after the American Civil War (1861–1865) became pastor of the Second Baptist Church in Richmond. Binga quickly found his place. On May 1, 1872, he accepted a call to become pastor of the First Baptist Church in Manchester (later First Baptist Church of South Richmond). Meanwhile, he applied to become a teacher in Manchester’s public schools and so impressed Beverly Augustus Hancock, the superintendent, that Hancock made Binga the first African American teacher there and gave him responsibility for the secondary school for blacks. Binga, in effect, oversaw the public education of blacks in Manchester at what grew to be six schools. After sixteen years, however, he decided that his church duties required all of his time and resigned as a teacher, despite the school board’s request that he reconsider. By all accounts he was a stern disciplinarian, but his students, some of whom became prominent themselves, always expressed respect and affection for him. 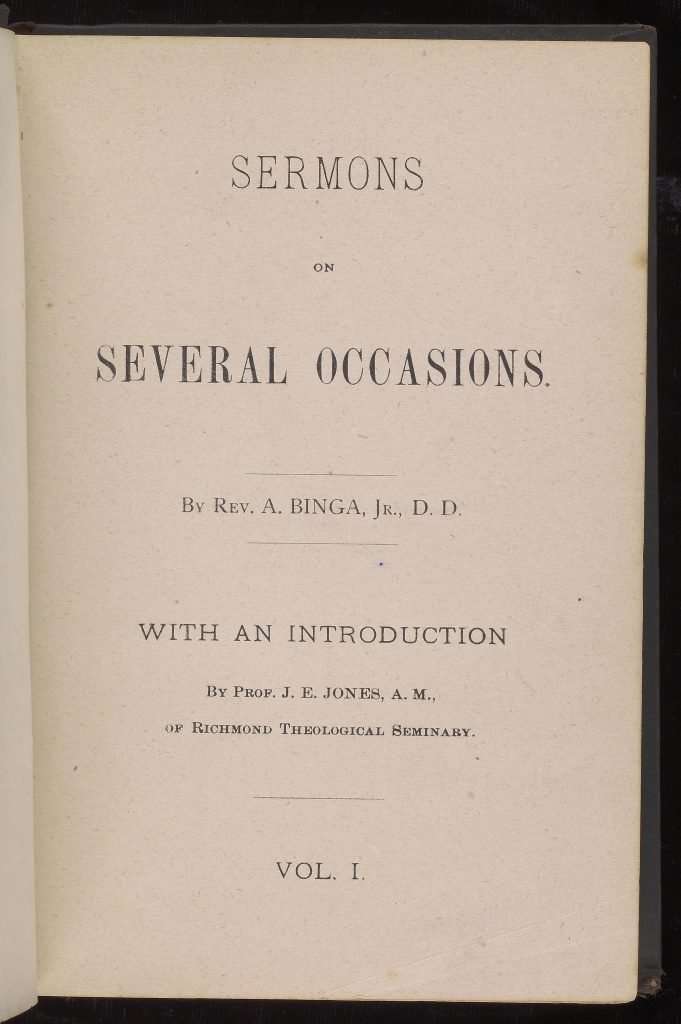 Although he could lead when necessary, Binga deferred regular business to the board of deacons because he believed that the congregation should control the church. He also expanded voting rights of women members and pushed for construction of a new, larger building, which was dedicated November 12, 1881. As church membership continued to grow and factories expanded into the neighborhood, Binga proposed moving to the site where the church now stands. The new building was dedicated May 10, 1896, and the mortgage was paid on June 7, 1903. Binga discouraged holiday services that seemed to produce more amusement than spirituality. He never delivered more than two sermons on a Sunday, so that he could give each one his full attention. A number of them were published as pamphlets or in a collection entitled Sermons on Several Occasions (1889).

In 1874 Binga was elected recording secretary of the Virginia Baptist State Convention, and he was recording secretary of the Virginia Baptist State Sabbath School Convention when it was incorporated in 1889. He became the first chairman of the Foreign Mission Board of the Baptist Foreign Mission Convention in 1880 and remained active in the organization as it evolved into the National Baptist Convention. Over time Binga concluded that too much of the convention’s funds were being spent in the United States rather than on missionary work. When he proposed smaller, more economical district missionary conventions in 1896, Virginians helped form an auxiliary of the Lott Carey Baptist Foreign Mission Convention. Binga served on its board.

Other controversies divided black Baptists in Virginia during the 1890s, in particular the relationship of the new Virginia Seminary in Lynchburg (later Virginia University of Lynchburg) to Virginia Union University in Richmond, formed in 1899 from the merger of two seminaries established by the American Baptist Home Mission Society. Black Baptists disagreed over whether Virginia Seminary should accept aid from white northern Baptist organizations at the cost of control over the institution. As a trustee of Virginia Union and longtime supporter of the American Baptist Home Mission Society, for which his father had worked as an agent before the Civil War, Binga was a “cooperationist.” Nonetheless, when the “separatists” gained control of the Virginia Baptist State Convention in 1899, the delegates reelected him recording secretary. He resigned, however, and helped to organize the Baptist General Association of Virginia (Colored), of which he became treasurer. 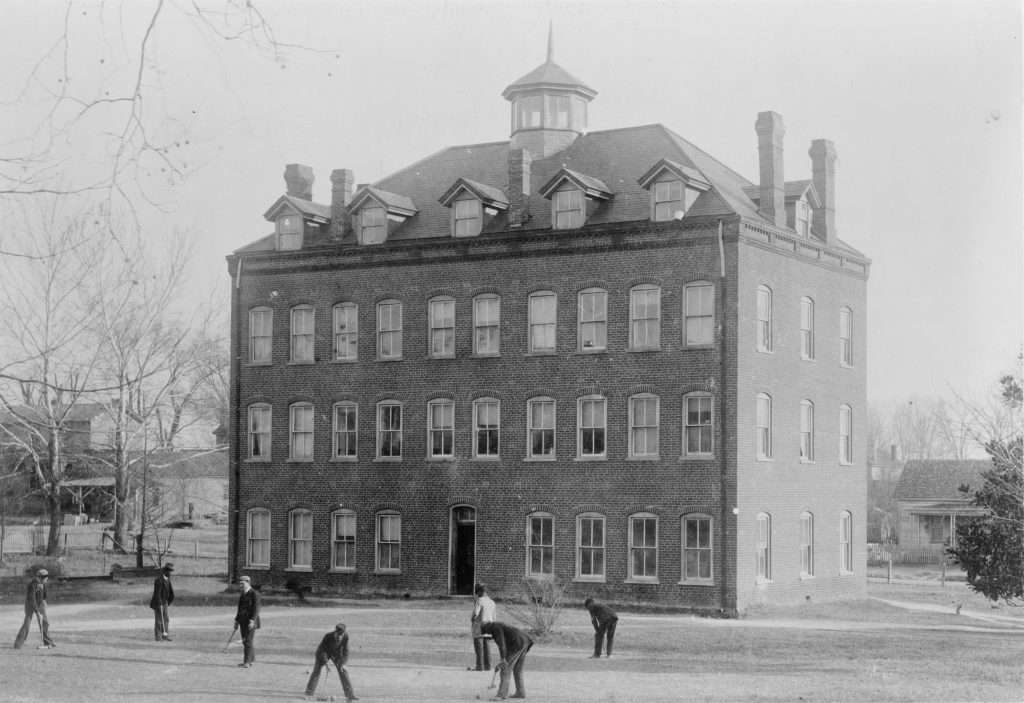 Binga received an honorary DD from Shaw University in Raleigh, North Carolina, in 1889, and the Lott Carey Convention sent him to London in 1905 as a delegate to the Baptist Congress there. Rebecca Binga died on October 26, 1907, after many years as an invalid. On December 2, 1909, Binga married Mary Virginia Young, and they had one son. Binga suffered from arteriosclerosis and died suddenly on January 21, 1919. He was buried in the family plot at Mount Olivet Cemetery in Richmond. His widow lived until 1958 and became a civic leader best known for her advocacy of improved recreational facilities.