John Hendren Bell was born in Augusta County, the second of three sons and second of four children of Samuel Henry Lockridge Bell and Sarah Ellen Cosby Bell. His elder brother, Wilbur Cosby Bell, was on the faculty of Virginia Theological Seminary for many years. John Hendren Bell attended Washington and Lee University from 1901 to 1903 and the University of Virginia from 1904 to 1907. Like his father, a graduate of the University of Chicago, he studied medicine and in 1909 graduated from the medical school of the University of the South in Sewanee, Tennessee. He married Elizabeth Spotts Harlowe on April 8, 1909, and they had one daughter.

Bell worked in Gary, McDowell County, West Virginia, as a physician for the United States Coal and Coke Company from 1909 through 1914 and for the Wright Coal and Coke Company in 1915 and part of 1916. Later in 1916 he opened a private practice in Augusta County and served as an assistant physician at Western State Hospital in Staunton. In 1917 Bell joined the staff of the State Colony for Epileptics and Feeble-Minded near Lynchburg. During World War I (1914–1918) he served in the U.S. Army and afterward briefly in the Balkans, where he assisted in the establishment of a hospital.

Eugenics in Virginia
Bell returned to Lynchburg after the war and in 1925 was appointed superintendent of the State Colony for Epileptics and Feeble-Minded to succeed Albert Sidney Priddy, who had died. Bell inherited from Priddy an important legal case designed to test the constitutionality of the practice of surgical sterilization of persons believed to be incompetent because of feeblemindedness, insanity, alcoholism, epilepsy, or other traits regarded as defects and assumed to be hereditary in origin and therefore preventable by sterilization. Virginia’s 1924 Act to Provide for the Sexual Sterilization of Inmates of State Institutions in Certain Cases authorized the staff of the Virginia Colony to perform the procedures.

Priddy and other advocates of eugenic sterilization arranged for a suit to be brought in order that the law and the practice could be tested in the U.S. Supreme Court. They selected Carrie Elizabeth Buck, a young woman who had been committed to the State Colony. The physicians concluded that she had inherited feeblemindedness from her mother and that her infant child showed signs of slow mental development. On May 2, 1927, the Supreme Court upheld the constitutionality of Virginia’s law. In the Court’s decision in Buck v. Bell, Justice Oliver Wendell Holmes wrote that the principle that the federal courts had used to sustain compulsory vaccination was broad enough to cover sterilization. Holmes’s immediately famous conclusion was that “Three generations of imbeciles are enough.” 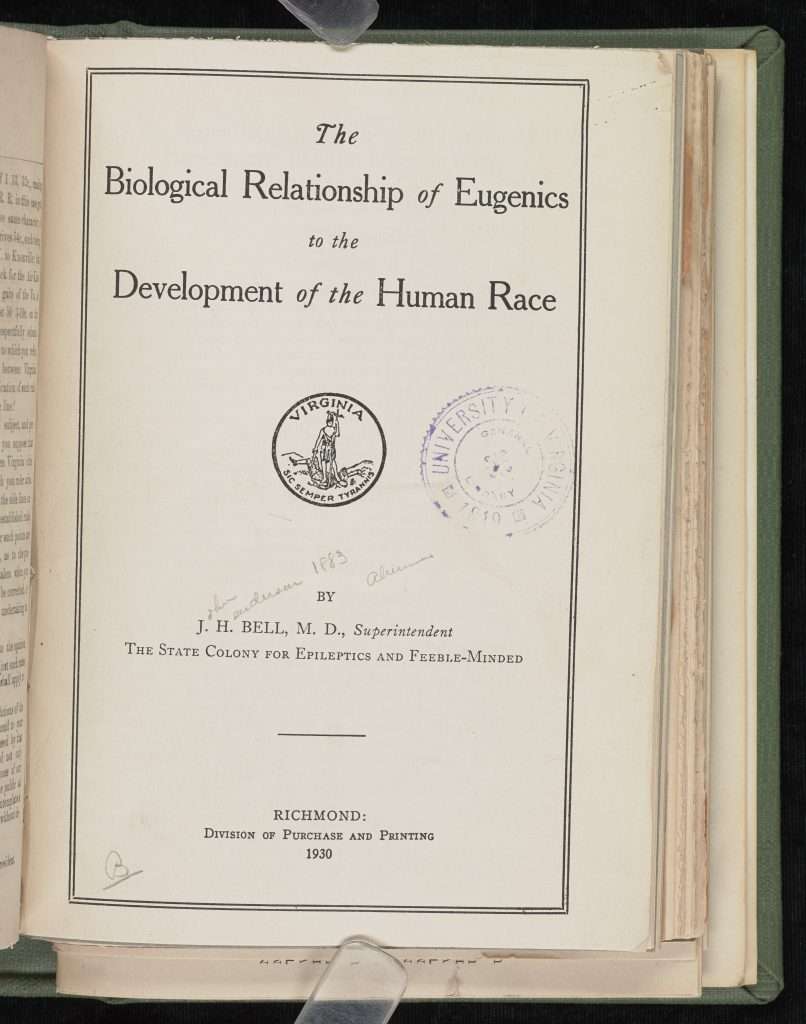 Bell performed the operation on Buck and during the ensuing years presented several papers at professional meetings defending the practice and the assumptions on which it was grounded. He published the lectures as pamphlets entitled Eugenic Sterilization (1929), Opinions as to the Etiology of Mental Disorders (1929), The Biological Relationship of Eugenics to the Development of the Human Race (1930), Mental Diseases from the Standpoint of the General Practitioner (1931), and Eugenic Control and its Relationship to the Science of Life and Reproduction (1931). During the next five decades more than 8,300 people underwent involuntary surgical sterilization in Virginia’s public institutions, and a total of approximately 50,000 such procedures were performed in the United States.

Bell belonged to the American Medical Association, the American Association for the Advancement of Science, the Virginia Academy of Science, and the Medical Society of Virginia. In the summer of 1933 he developed heart disease and first took a leave of absence and then in October resigned as superintendent of the State Colony for Epileptics and Feeble-Minded. In spite of his poor health, or perhaps because his condition was not widely known, he was elected vice president of the American Psychiatric Association in 1934. Bell died in Staunton on December 9, 1934, and was buried at Mossy Creek Presbyterian Church, in Augusta County.