John Yates Beall was born on January 1, 1835, at Walnut Grove, his family’s farm near Charles Town, Virginia (now West Virginia), the second of four sons and fourth of nine children of George Brook Beall and Janet Yates Beall. He was educated at home and in September 1852 began law-oriented studies at the University of Virginia, but he left in June 1855 without taking a degree. That August Beall and his older sister set out for Dubuque, Iowa, to join their older brother, a successful land investor, but turned back on learning of their father’s serious illness. After the latter’s death on August 20, Beall took over the management of the farm. 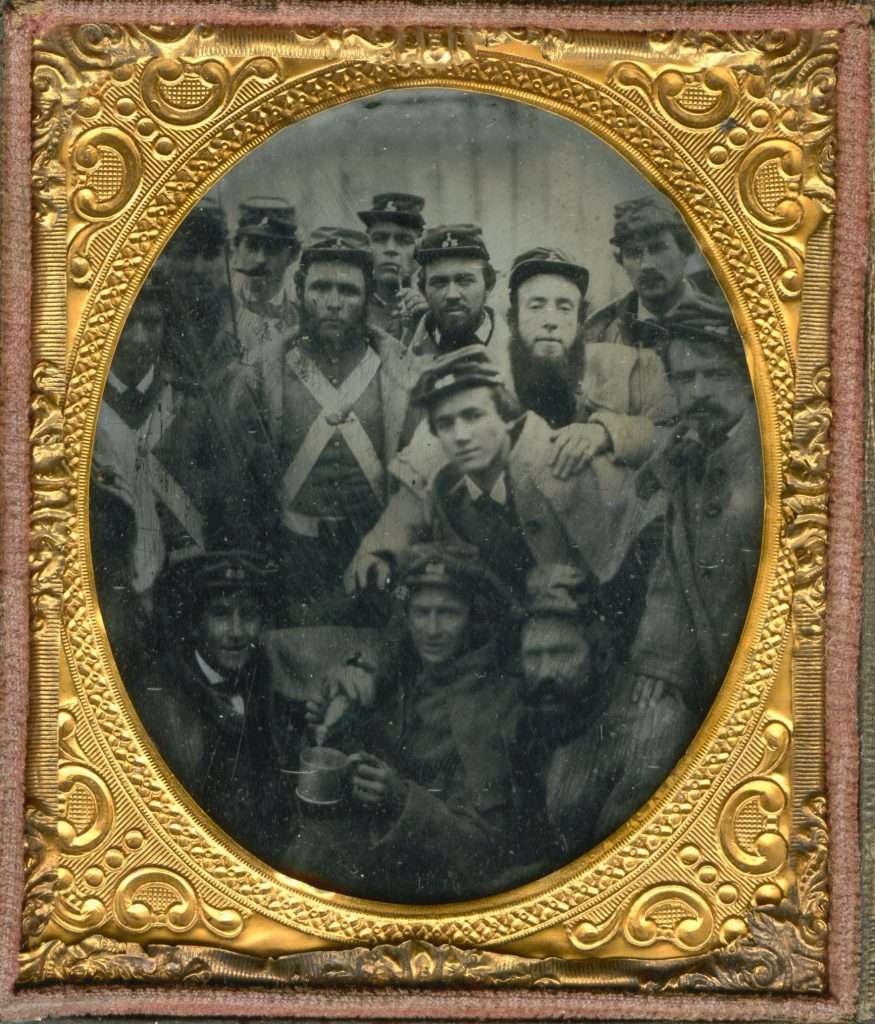 Beall was active in the Zion Episcopal Church and known for his serious nature, cultivated tastes, and abstemious habits. He enrolled as a private in the Botts Greys, the Charles Town militia company, after John Brown’s raid on Harpers Ferry. While he was on duty during Brown’s trial and execution in Charles Town late in 1859, Beall probably met John Wilkes Booth, then a corporal in the Richmond Greys. Postwar stories that they had been close friends since boyhood and that Booth had assassinated U.S. president Abraham Lincoln because he believed Lincoln had broken a promise to pardon Beall are apocryphal.

On April 18, 1861, the Botts Greys became Company G of the 2nd Virginia Infantry, one of the five regiments that soon comprised Confederate general Thomas J. Jackson‘s famed Stonewall Brigade. On October 16, while detailed to take a sick soldier to Jefferson County, Beall learned that Lieutenant Colonel Turner Ashby’s troops were under attack at nearby Bolivar Heights. Beall joined Ashby and, despite his low rank, led an impromptu charge in the course of which he suffered a severe chest wound. During his long recuperation from this injury, which never fully healed, he visited a Louisiana plantation and met Martha O’Bryan, a Nashville schoolteacher to whom he became secretly engaged.

After Jackson’s victory at Winchester on May 25, 1862, Beall joined elements of the army in nearby Jefferson County. He then became separated from Confederate forces during Jackson’s retreat up the Shenandoah Valley. Dispirited and unable to locate his unit, Beall again journeyed to Iowa, settling in Cascade, near Dubuque. There his brother helped him obtain a job operating a gristmill under the name John Yates. In September, warned that his Confederate identity was about to be revealed, he fled north and in November reached Dundas, Canada West, near Toronto. While there Beall attempted to enlist for sea duty on a privateer but was dissuaded by doctors. Undeterred, he left in January 1863 for Richmond where, assisted by Colonel Edwin Gray Lee, formerly of the Stonewall Brigade, he presented two proposals to Confederate president Jefferson Davis. Beall’s plan to free Confederate prisoners on Johnson’s Island off of Lake Erie in Sandusky Bay, Ohio, and form an independent military force was rejected, but his offer to conduct irregular naval operations on the Chesapeake Bay won approval. He received a medical discharge from the army on February 18, 1863, and on March 5, was commissioned an acting master in the Confederate navy. Beall joined with Lee, now a navy captain, to recruit a small band of volunteers and establish clandestine headquarters in Mathews County. Their initial efforts were unsuccessful and Lee resigned, leaving Captain Beall in charge. This title, awarded by his men, increased later confusion about his rank and branch of service.

Beall’s command of about twenty men, outfitted with a sail canoe and a yawl, inflicted considerable damage by cutting a submarine cable, destroying a lighthouse, and capturing merchant ships carrying supplies. On November 15, 1863, Union forces, after months of attempts, finally captured the raiders near Tangier Island in Chesapeake Bay. Treated initially as pirates, Beall and his men were taken to Fort McHenry, Baltimore, and placed in irons. After periods of confinement on a ship off of Fort Monroe and in a prisoner-of-war camp at Point Lookout, Maryland, Beall was moved to Union-occupied City Point. In March 1864 he returned to Richmond in a prisoner exchange.

Beall reunited briefly with his fiancée in Georgia, then applied to authorities in Richmond for new assignments. After refusing a lieutenant’s commission in the secret service, he returned to Canada in August 1864 and contacted Lieutenant Colonel Jacob Thompson, in charge of Confederate operations on that border. Thompson asked Beall to lead a raid on Johnson’s Island to free about 3,000 imprisoned Confederates, a scheme similar to that which Beall had proposed the year before. On September 19, 1864, Beall and nineteen men disguised as civilian passengers seized the Philo Parsons, a ferry en route to Sandusky Bay. The raiders entered the bay at nightfall, but their plan to capture the gunboat Michigan and force the release of the prisoners on the island went awry when agents assigned to drug the crew of the Michigan were apprehended. When the agents failed to give the prearranged signal, Beall’s men refused to proceed and returned to Canada.

Beall then joined a small band that attempted to derail trains carrying Confederate prisoners. On December 16 he was apprehended at Niagara Falls and imprisoned in a New York City jail cell. He was taken to Fort Lafayette on January 5, 1865, to be tried by a military commission for his role in the Lake Erie raid, for spying, and for attempting to wreck trains carrying civilian passengers. Major General John Dix blocked communications between Beall and the outside world and denied him his choice of counsel. Although James T. Brady, a prominent New York City attorney, argued ably that Beall was a Confederate naval officer acting under orders, he was convicted. In mid-February he was transferred to Fort Columbus on Governors Island in New York Bay. Brady and others made extraordinary efforts to obtain a pardon, including visits to President Abraham Lincoln, a petition signed by ninety-two members of Congress, and letters to Lincoln and Secretary of War Edwin M. Stanton.

Beall was hanged on February 24, 1865. His last words were, “I protest against this execution. It is absolute murder—brutal murder. I die in the service and defence of my country.” Beall’s body was buried in Green-Wood Cemetery in Brooklyn, New York. On March 22, 1870, it was reinterred in the Zion Episcopal Church graveyard in Charles Town.

RELATED CONTENT
Categories:
Type:
Related SOLs:
MAP
TIMELINE
January 1, 1835
John Yates Beall is born at Walnut Grove, his family's farm near Charles Town, Virginia (now West Virginia).
September 1852
John Y. Beall begins law-oriented studies at the University of Virginia.
June 1855
John Y. Beall leaves the University of Virginia without taking a degree.
August 1855
John Y. Beall and his older sister set out for Dubuque, Iowa, to join their older brother, a successful land investor, but they turn back upon learning of their father's serious illness.
August 20, 1855
George Brook Beall, father of John Y. Beall, dies. The younger Beall takes over the management of the family farm near Charles Town, Virginia (now West Virginia).
December 2, 1859
John Y. Beall, a private in the Botts Greys, the Charles Town militia company, is on duty for the execution of John Brown. He probably also meets John Wilkes Booth, then a corporal in the Richmond Greys.
April 18, 1861
The Botts Greys, including John Y. Beall, becomes Company G of the 2nd Virginia Infantry, one of the five regiments that will comprise the Stonewall Brigade.
October 16, 1861
While detailed to take a sick soldier to Jefferson County, John Y. Beall of the 2nd Virginia Infantry learns that Turner Ashby's troops are under attack at nearby Bolivar Heights. Beall joins Ashby and leads a charge in which he is severely wounded.
November 1861—May 1862
John Y. Beall recuperates from a chest wound. While visiting a Louisiana plantation he meets Martha O'Bryan, a Nashville schoolteacher to whom he becomes secretly engaged.
May 1862
After the Confederate victory at the First Battle of Winchester, John Y. Beall rejoins the Stonewall Brigade but becomes separated from his unit. He moves to Iowa and gets a job operating a gristmill under the name John Yates.
September 1862
John Y. Beall, living in Iowa after leaving his Confederate unit in Virginia, flees to Canada before his true identity can be revealed. He attempts to enlist for sea duty, but doctors dissuade him.
January 1863
John Y. Beall leaves Canada for Richmond where he presents proposals to Confederate president Jefferson Davis on how to free Confederate prisoners in Sandusky Bay, Ohio, off of Lake Erie.
February 18, 1863
John Y. Beall receives a medical discharge from the Confederate army.
March 5, 1863
John Y. Beall is commissioned an acting master in the Confederate navy.
November 15, 1863
Near Tangier Island in the Chesapeake Bay, Union forces, after months of attempts, capture Confederate raiders, including John Y. Beall, who damaged a submarine cable, destroyed a lighthouse, and captured a merchant ship carrying supplies.
March 1864
Captured by Union forces the previous November, John Y. Beall is returned to Richmond in a prisoner exchange.
August 1864
After refusing a commission in the Confederate secret service, John Y. Beall returns to Canada to resume his raiding activities.
September 19, 1864
John Y. Beall and nineteen men disguise themselves as civilian passengers to seize a ferry on Lake Erie. They abort a plan to capture a Union gunboat and free Confederate prisoners when another group of Confederate agents are apprehended.
December 16, 1864
John Y. Beall is captured at Niagara Falls during an attempt to derail trains carrying Confederate prisoners. He is imprisoned in New York City.
February 24, 1865
After being tried and convicted as a spy, and despite a petition for his pardon signed by ninety-two members of the U.S. Congress, John Y. Beall is hanged and buried in Brooklyn, New York.
March 22, 1870
The body of John Y. Beall is reinterred in the Zion Episcopal Church graveyard in Charles Town, West Virginia.
FURTHER READING
CITE THIS ENTRY