Battle was born in New Bern, North Carolina, on July 11, 1890. His father, a Baptist minister, was soon called to a church in Petersburg, Virginia. Battle graduated Phi Beta Kappa from the University of Virginia School of Law in Charlottesville in 1913. He married Janie Lipscombe in 1918. The lifelong marriage produced two sons, John Jr. and William. His law practice well established, Battle won election to the Virginia House of Delegates in 1929. Four years later he was elected to the state senate, a seat he held until his election as governor in 1949. He sponsored bills providing for Virginia’s participation in the national unemployment compensation program, abolishing the fee system for sheriffs, and creating a probation and parole system. In 1946 he became chair of the Senate Finance Committee. 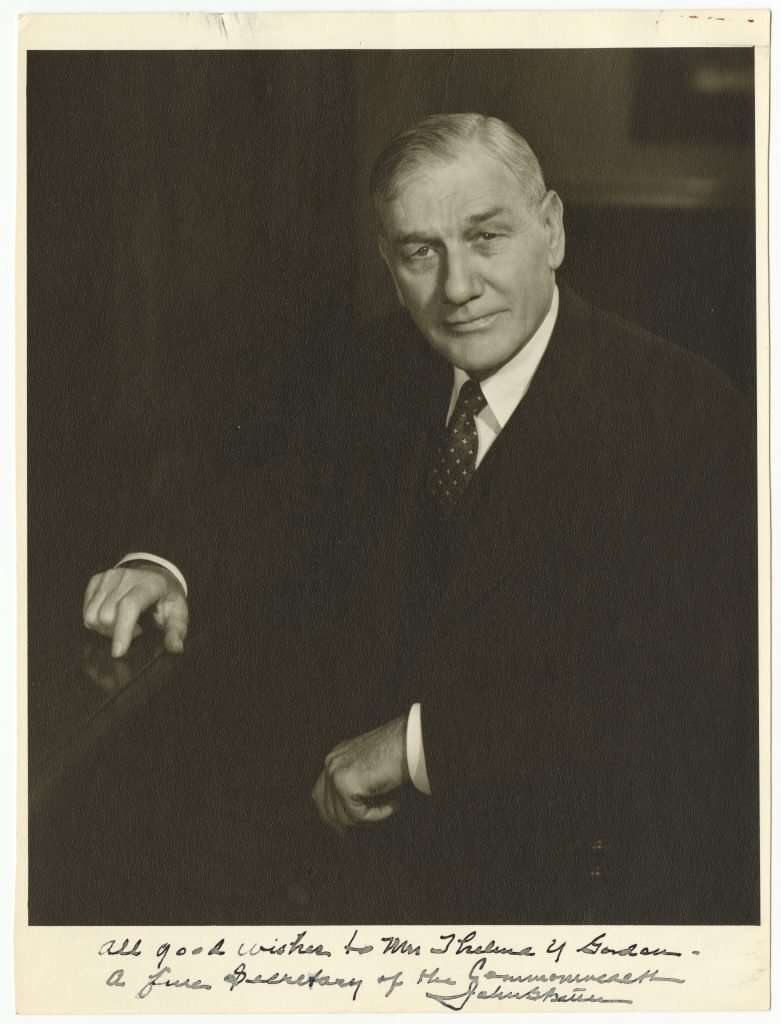 After consulting with Byrd, Battle declared his candidacy for governor in June 1948. Three other candidates—Francis Pickens Miller, the leader of the anti-Byrd forces; Horace Edwards, the mayor of Richmond; and Remmie Arnold, a Petersburg manufacturer—challenged Battle for the nomination. There was no provision for a runoff primary. Unaccustomed to contested elections, Battle at first conducted a desultory campaign. Concerned that Miller would triumph, Byrd and his advisor, E. R. Combs, became actively involved. After Edwards proposed a sales tax to increase state aid to public schools, Combs responded with the “Battle Fund,” which consisted of a newly found surplus in the state’s general fund and a program of low-interest loans.

Combs also urged Battle to take a strong stand against labor union leaders and organizers. The Battle campaign obtained a copy of a letter written by James C. Petrillo, president of the American Federation of Musicians, to members of the union in Virginia, endorsing Miller. Battle effectively used the letter to associate Miller with Petrillo, one of the most unpopular labor leaders in the nation. The Battle campaign also exerted a maximum effort to undermine Edwards, who had support in the Byrd Organization, by using the slogan “A Vote for Edwards is a Vote for Miller.” In addition, a leading Republican, Henry Wise, advised party members to support Battle in the Democratic primary. Combs’s stratagems and Wise’s appeal were probably decisive in securing victory for Battle, who received 43 percent of the vote to Miller’s 35 percent. Edwards and Arnold trailed with 15 and 7 percent, respectively. Battle easily won the general election and was inaugurated on January 18, 1950. 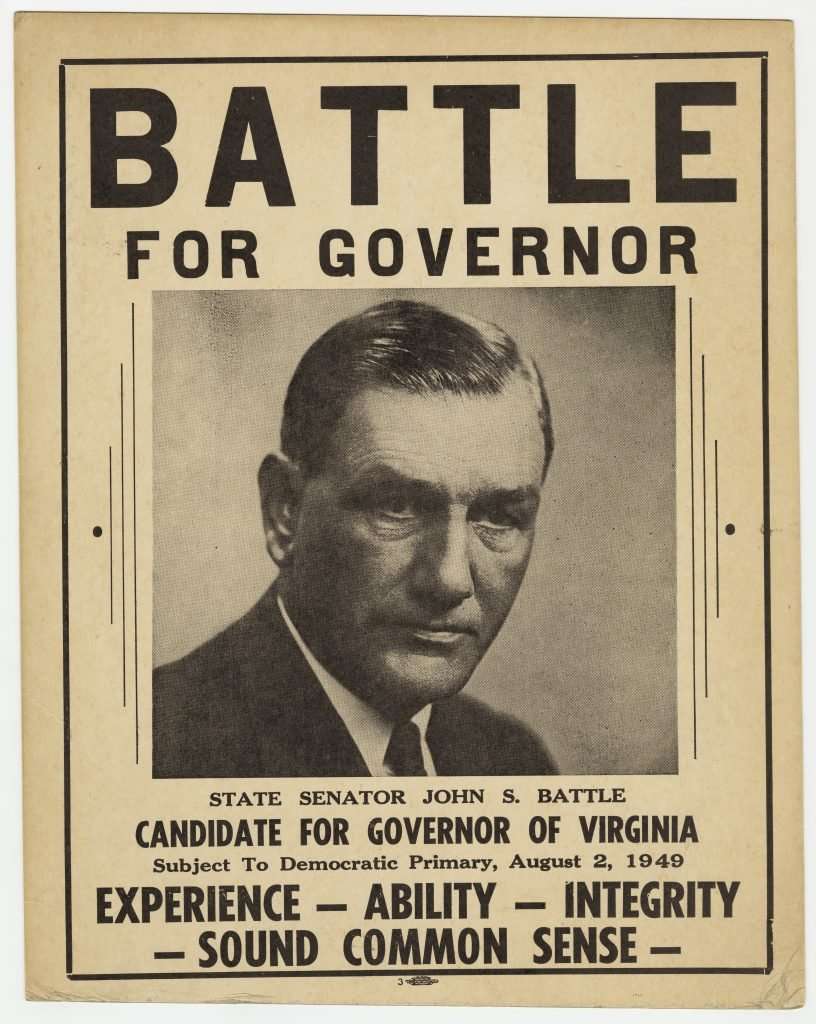 Battle’s four years as governor can be characterized as the Indian summer of the Byrd Organization. Dignified yet personable, Battle enjoyed excellent relations with the General Assembly. His most significant accomplishment was his program of state aid to localities for school construction, the first such program in the history of Virginia. Beyond education, Battle’s achievements were few. He initially opposed reducing taxes, but state senator Harry F. Byrd Jr. introduced a bill requiring that, if revenues in the general fund exceeded budget estimates by a certain percentage, individuals and corporations should receive refunds on their state income taxes. The refunds proved substantial, but the lost revenue prevented the Battle administration from adequately funding many institutions such as the state’s mental hospitals. Battle knew the legislation was ill-advised, but he also felt a deep sense of loyalty and obligation to the senior Byrd for his election.

On two occasions during his governorship Battle achieved national attention. In 1949 seven black youths from Martinsville were sentenced to death for the rape of a white woman. Battle granted stays of execution as the defendants—who became known as the Martinsville Seven—appealed the verdicts. Their appeals exhausted, they sought executive clemency. Letters from across the world and protesters at the Capitol demanded either release of the men or commutation of their sentences. Battle gave commutation serious consideration, but in the end he decided not to intervene in the judicial process. The men were executed in February 1951.

Battle’s actions at the 1952 Democratic National Convention in Chicago again elevated him to the national stage. Liberal Democrats wanted to impose a mild loyalty oath pledging that the nominees of the convention would be on each state’s ballot in November. The Virginia, Louisiana, and South Carolina delegations objected. Speaking calmly yet forcefully, Battle addressed the convention and a national television audience. Asserting that both Virginia law and Virginia’s honor required that the nominees be placed on the ballot, he declared that the delegation would not subscribe to a loyalty oath. Battle’s speech led to the resolution of the issue without the imposition of the oath or the expulsion of the dissenting delegations.

The first serious challenges to racial segregation in Virginia occurred while Battle was governor. When the National Association for the Advancement of Colored People, or NAACP, demanded the desegregation of state parks, Battle raised the possibility of closing them instead. During Battle’s term a student strike at R. R. Moton High School in Prince Edward County led to the legal case challenging public school segregation that was ultimately joined with Brown v. Board of Education and argued before the U.S. Supreme Court. Although Battle voiced his concern about an adverse decision by the court, he made no preparations for such an eventuality. Battle’s failure of leadership left it to others, more extreme in their views, to formulate Virginia’s plan of massive resistance to the Brown decision.

In November 1957, Eisenhower appointed Battle to the new U.S. Commission on Civil Rights. Battle surprised some by criticizing Alabama officials for their refusal to cooperate with the commission; however, he dissented from the body’s final report, objecting to its “nature and tenor,” as well as its specific proposal for the appointment of federal voting registrars. Battle resigned from the commission in October 1959.

After several years of failing health, Battle died on April 9, 1972.