The youngest of six children, Barnum was born in 1848. She spent her childhood moving through Arkansas, Texas, and Louisiana as her father, James Dawson, a retired army captain, sought employment. Her mother, Sophie E. Baylor Dawson, educated her at home. In time, Sophie Dawson divorced her husband, reclaimed the Taylor name, and joined the household of her other daughter and Frances’s sister, Sophie M. Baylor Walker, wife of Confederate general John Walker. The Taylors and Walkers lived together in Winchester but traveled abroad, first to England from 1865 until 1867 and then to Europe from 1873 until 1874.

Barnum began her career writing pseudonymous prose sketches for newspapers. Under her own name, she began writing short stories and poems for magazines and journals such as Harper’s. Her first book, On Both Sides, published in 1886, combined two of her early magazine stories in novel form. It was popular enough to sustain eleven editions. After completing her Virginia novel, Behind the Blue Ridge, Barnum wrote a book for young readers, Juan and Juanita. Based on events reported in the news, the work dramatized brother and sister’s escape from Indian captivity. 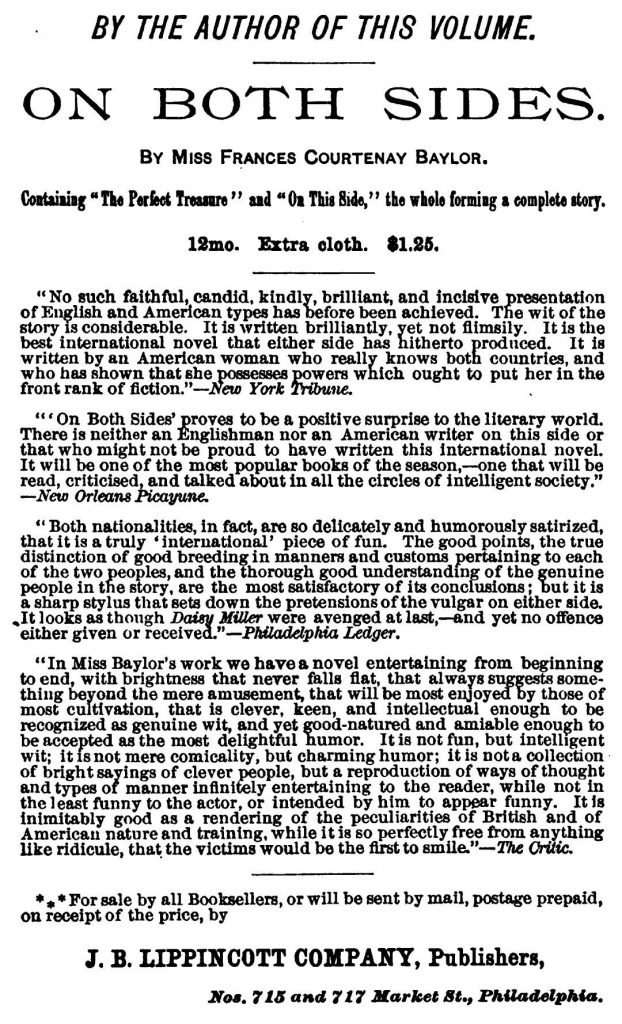 Advertisement for On Both Sides

In 1889, Barnum produced A Shocking Example and Other Sketches, a collection of her previously published magazine stories. A romantic novel, Claudia Hyde, followed. Barnum drew on the Baylor family’s Virginia history and her experiences living abroad to entertain readers with a tale of romance between a transplanted English gentleman and the daughter of a Virginia plantation owner. Her subsequent novels include Miss Nina Barrow (1897), The Ladder of Fortune (1899), and A Georgian Bungalow (1900).

Among her poems, “Kind Words to Virginia” and “The Last Confederate” may be the ost well known. These poems are most notably nostalgic for the idea of the conventional southern gentility of her maternal ancestors, who had been planters and horse breeders in Caroline County. All of Barnum’s work is out of print, though some is held in collections at The Virginia Historical Society and The Library of Virginia.

A brief 1896 marriage to Georgia railway official George Barnum ended with his death shortly after their wedding. Barnum then returned to Winchester, where she lived until her death in 1920. During those years, Barnum was active in Olla Podrida, a Winchester literary society for women, and worked in support of educational opportunities for African American children.