Barbour was born on May 25, 1783, in Orange County, the youngest of four sons and fifth of eight children of Thomas Barbour and Mary Pendleton Thomas Barbour. Barbour’s father served in the House of Burgesses from 1769 to 1776 and in the first four Revolutionary Conventions. His mother was closely related to two Caroline County men of note, Edmund Pendleton, after whom he was named, and John Taylor of Caroline, whose political principles he espoused all of his life. In spite of family financial reverses that prevented Philip Pendleton Barbour and his older brother James Barbour from completing their educations, they were privileged young men by the standards of their day. Philip Pendleton Barbour studied under the local Episcopal minister, Charles O’Niel, and briefly at the College of William and Mary. After lack of money forced him to drop out of school he studied law with St. George Tucker.

Barbour practiced law in Bardstown, Kentucky, for a short time, but in 1802 he moved back to Orange County and opened a law office in Gordonsville. On October 4, 1804, he married Frances Todd Johnson, the sister of James Barbour’s wife, Lucy Johnson Barbour, and also his own first cousin. They had two daughters and five sons. They gave family names to their first four children but named their last three baby boys unconventionally: Quintus, Sextus, and Septimus. 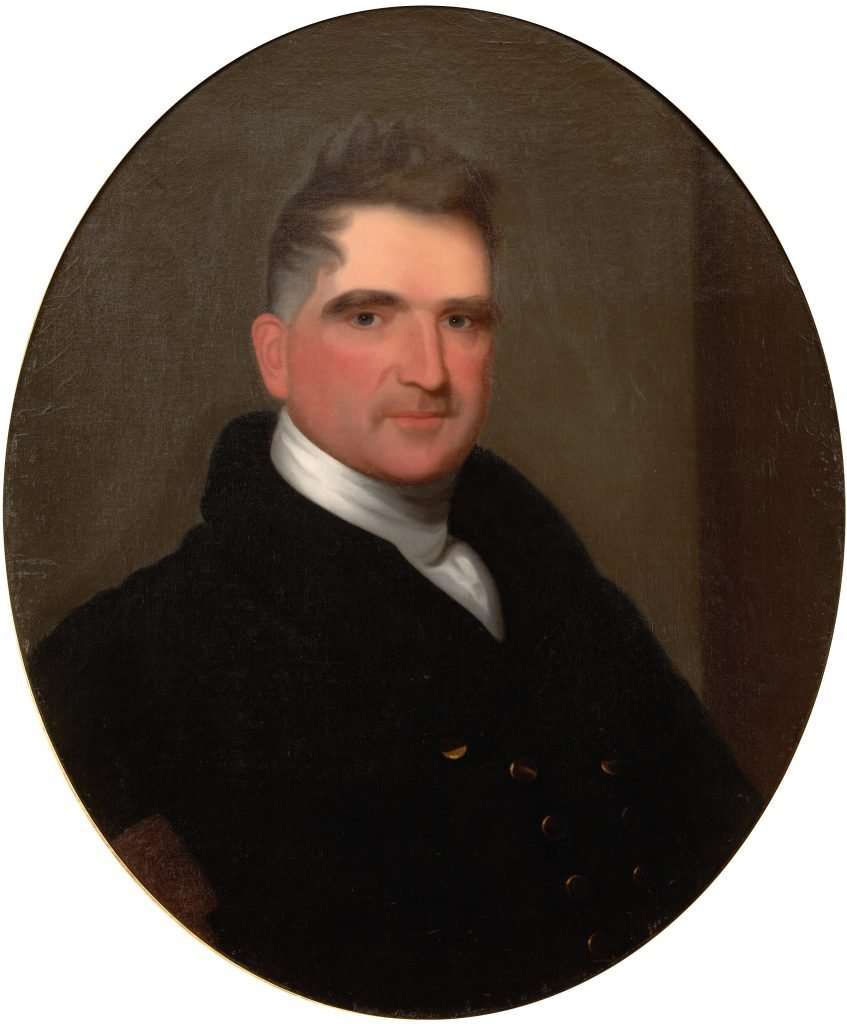 Barbour was elected to the House of Delegates in 1812, only a few months after James Barbour became governor of Virginia. He served two years in the General Assembly and received appointments to two major committees, finance and courts of justice, perhaps because he was the brother of the popular governor. In the spring of 1814 he ran for the House of Representatives to succeed John Dawson, who had died in office. Barbour defeated John Mercer in the special election, defeated him again in the general election in April 1815, and ran unopposed for each of the next four terms, serving in all from September 19, 1814, until March 4, 1825.

His decade in the House of Representatives roughly coincided with James Barbour’s service in the U.S. Senate, but the brothers’ political views, which had earlier been much the same, diverged radically. Unlike James Barbour, who embraced the postwar nationalism of Henry Clay, John C. Calhoun, and others, and who eventually served as secretary of war in the cabinet of John Quincy Adams, Philip Pendleton Barbour adhered closely to the agrarian, strict construction, states’ rights philosophy of what came to be called the Old Republicans in Virginia. He joined Nathaniel Macon from North Carolina and fellow Virginians John Taylor of Caroline, John Randolph of Roanoke, and Judge Spencer Roane in leading opposition to publicly funded internal improvements, the national bank, and the protective tariff. During the debates on the Missouri Compromise, Barbour denounced as unconstitutional every attempt to impose restrictions on the admission of Missouri as a slave state.

Barbour continued to practice law while in Congress, and in 1821 he was among those serving as counsels for the commonwealth when the important case of Cohens v. Virginia was argued before the U.S. Supreme Court. Barbour followed his instructions from the state government to argue that the Supreme Court lacked jurisdiction, but Chief Justice John Marshall sweepingly rejected his arguments and asserted that the supremacy clause of the Constitution meant that all congressional statutes took precedence over any laws of a state and that the federal courts could review the rulings of state courts on questions of constitutionality. The decision was a major defeat for strict constructionists such as Barbour. As in all of his political speeches, his argument in Cohens v. Virginia was a legalistic, forceful, logical call for a strict, almost literal interpretation of the U.S. Constitution that would limit the powers of the national government but not those of the states. Barbour’s admirers often complimented his powerful reasoning and uncompromising defense of states’ rights, but a Whig newspaper pithily summarized opponents’ opinions by calling him a “shallow metaphysical hair-splitter.”

In December 1821 Barbour was elected Speaker of the House of Representatives, defeating incumbent John W. Taylor, of New York, who had become unpopular with southern members during the Missouri debates due to his opposition to slavery. Barbour served only one two-year term as Speaker because former Speaker Henry Clay was reelected to Congress the following year and in effect claimed the office. 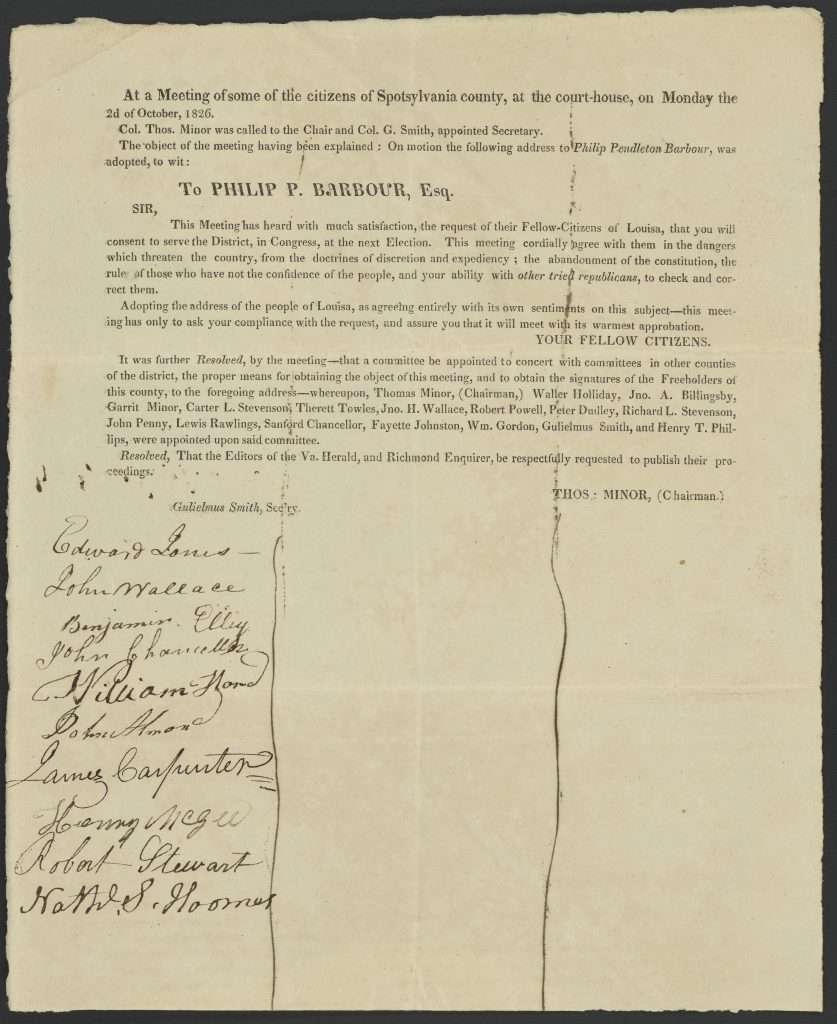 Barbour chose not to run for another term in Congress, and on February 7, 1825, the General Assembly elected him one of the judges of the General Court for the eastern district of Virginia. In 1827, however, he consented to run again for the House of Representatives, and he was elected without opposition and reelected for the last time in 1829. Barbour ran again for Speaker when he returned to Congress, but lost to Andrew Stephenson, of Virginia, leaving Barbour free to attack the Adams administration (of which his brother was an important member) unsparingly. Barbour supported Andrew Jackson for president in 1828 and was seriously considered for appointment to Jackson’s Cabinet, but he settled for an appointment as judge of the U.S. District Court for Eastern Virginia and on October 15, 1830, resigned from Congress. In spite of his ties with conservative southern Democrats, Barbour stood behind Jackson during the nullification crisis. In 1832 he seemed willing to let southern Democrats try to substitute him for Martin Van Buren for vice president on the Democratic Party ticket, but Barbour withdrew after it became clear that Van Buren would definitely be elected.

In 1829 Barbour ran for a seat in the state constitutional convention. He and former president James Madison received the most votes in the counties of Louisa, Madison, Orange, and Spotsylvania and were two of the four men elected to represent that district in the convention that met from October 5, 1829, through January 15, 1830. Barbour served on the Committee on the Executive Department, frequently acted as chairman of the convention during debates in committee of the whole, and on December 9 was chosen president pro tempore to preside during the absence of President James Monroe, who was ill. After Monroe resigned from the convention, Barbour was unanimously elected president on December 12, 1829. From the beginning Barbour cast his lot with the conservative delegates from the eastern counties in opposition to most of the democratic reforms that the convention was considering. He favored retaining property qualifications for voting and supported allocating representation in the General Assembly on a mixed basis of white population and taxable property that continued the political dominance of the slaveholding counties in eastern Virginia.

Barbour remained a judge of the federal district court for more than five years. In March 1836 Andrew Jackson appointed him to the Supreme Court. The Senate confirmed Barbour by a vote of 30 to 11, and he took his seat at the beginning of the January 1837 term. During service on the Supreme Court of only four years, not long enough to have much impact on its direction or compile a distinctive judicial record, Barbour generally followed the lead of Chief Justice Roger B. Taney in redirecting the Court away from John Marshall’s judicial nationalism and broad interpretation of the Constitution. The most important opinion Barbour wrote during his short tenure on the Court was City of New York v. Miln, decided in 1837, in which he held that the constitutional grant of power to Congress to regulate foreign commerce was not exclusive and that state governments could also regulate aspects of commerce in order to protect public health and safety. The decision complemented Taney’s more famous opinion handed down the same year in Charles River Bridge v. Warren Bridge that laid the constitutional basis for what came to be called the police powers of the states.

Barbour died in his sleep during the night of February 24–25, 1841. A physician diagnosed heart disease and surmised that Barbour had probably died early in the morning of February 25. He was buried at what is now Congressional Cemetery.