Atkinson was born on September 13, 1792, in Isle of Wight County to James Atkinson and Mary Atkinson. The father’s occupation is not known, but the family’s modest resources provided for only a limited primary education for young Atkinson. When he was about eighteen he secured a job copying documents for the county clerk. Through this employment Atkinson became interested in the law and in October 1812 he enrolled at the College of William and Mary. When fighting broke out during the War of 1812, he interrupted his studies to join a volunteer militia company and in June 1813 he helped repel an amphibious British assault at Craney Island near Norfolk. By the end of 1813 he was back home, where he opened a law practice.

His ambition fueled by a growing interest in politics, Atkinson ran successfully for the House of Delegates in April 1815 and was reelected the next year. In December 1828 he returned to the House of Delegates for the first of three successive terms. In 1839 he won a seat in the Senate of Virginia and served until 1843, when he was elected to the U.S. House of Representatives from the first congressional district, comprising the counties of Isle of Wight, Prince George, Southampton, Surry, and Sussex. During his first term he served on the Committee on Naval Affairs. He was reelected twice to Congress, serving during his second term on the Committees on Commerce and Revolutionary Pensions, and during his last term, ending in March 1849, on the Committee on Commerce.

An uncompromising conservative Democrat, Atkinson routinely baited the Whig opposition. He opposed internal improvements, tariffs, and taxes, insisting that ordinary people were the best judges of how to spend their own money. He even regarded with suspicion public expenditures on education. 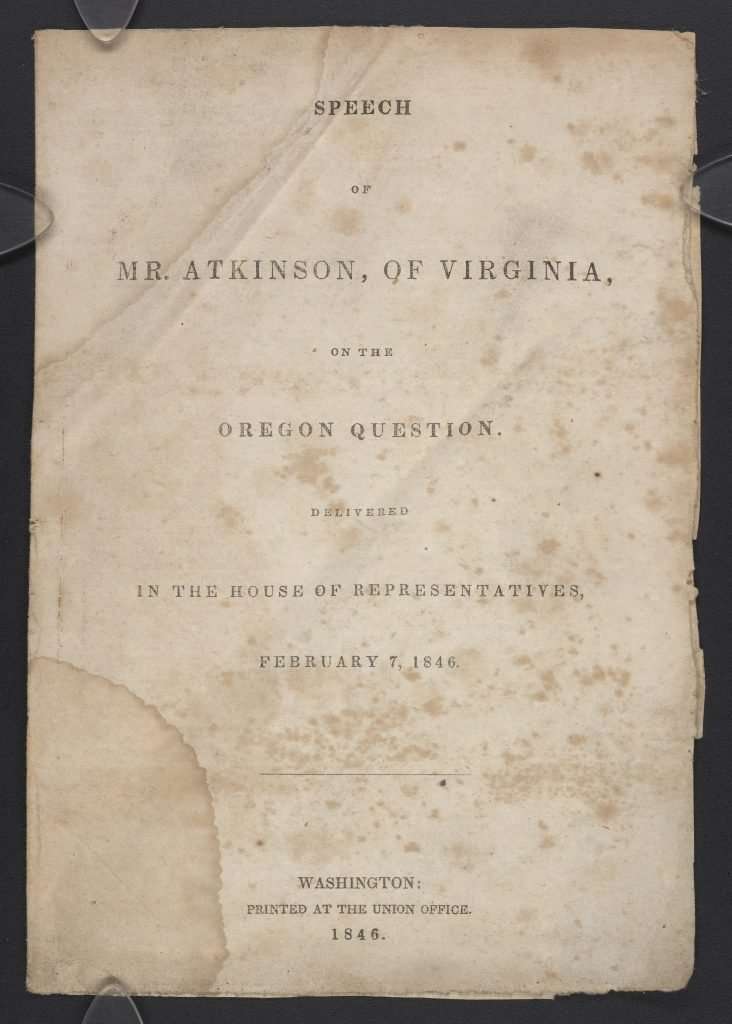 Speech of Mr. Atkinson, of Virginia, on the Oregon Question.

At the same time Atkinson championed territorial expansion. On February 7, 1846, he defended the U.S. claim to the Oregon territory and maintained that war was not a certain or even a probable consequence of the dispute with Great Britain. In any event, he reasoned that the best way to confront danger was to “meet it fully in the face—to insist upon your smallest rights.” Atkinson commended attempts by President John Tyler to annex Texas, and when the dispute over the Texas boundary led to war with Mexico in May 1846, Atkinson warmly supported both President James K. Polk and the war effort.

Atkinson outlined his beliefs passionately in his valedictory congressional speech on March 1, 1849. He warned northerners against supporting the “hateful, detestable, destructive” Wilmot Proviso, a provision restricting slavery in newly acquired territories that was attached to a bill seeking funds for purchasing lands from Mexico. Atkinson blasted critics of slavery who insisted that the system was evil and degraded, instead portraying bondage as a condition wherein Africans could evolve morally and intellectually. The “well-fed, well-clad, contented negro of Virginia asks not your sympathy for him,” Atkinson admonished his fellow legislators. He cautioned that southerners would not submit to northern attempts to subvert their property rights, adding that such efforts forced southern states to reconsider their membership in the Union. A year earlier, on April 11, 1848, Atkinson had announced on the House floor that the contented slaves in his district would rise up against any abolitionists who went among them.

Atkinson discontinued his law practice after his congressional tenure ended, turning instead to agriculture, but he remained active in public affairs in Isle of Wight County. Since 1831 he had been a county justice, and he was periodically recommissioned in that office through July 1856. From 1852 to 1855 he served as mayor of Smithfield. He was married twice, first to Frances Day on April 8, 1815, and then, following her death, to Elizabeth Ann Chilton, on April 24, 1829. He had a daughter by his first wife and his second marriage produced at least two sons and five daughters. Atkinson died at his home in Smithfield on January 7, 1872, and was buried at the Old Brick Church (Saint Luke’s Episcopal), four miles south of town.