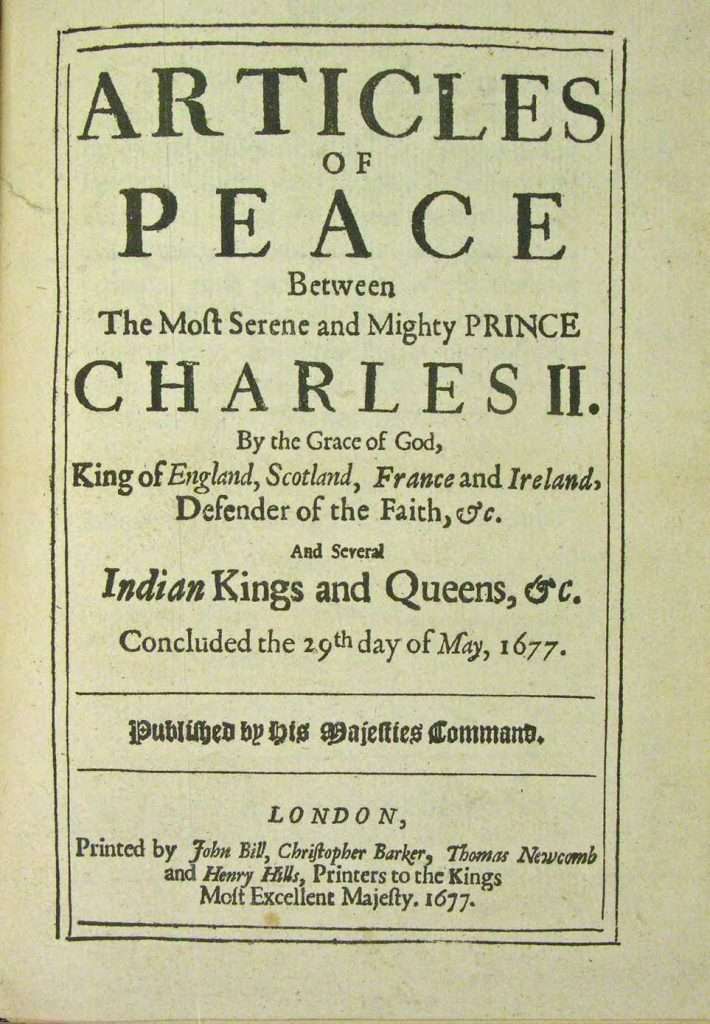 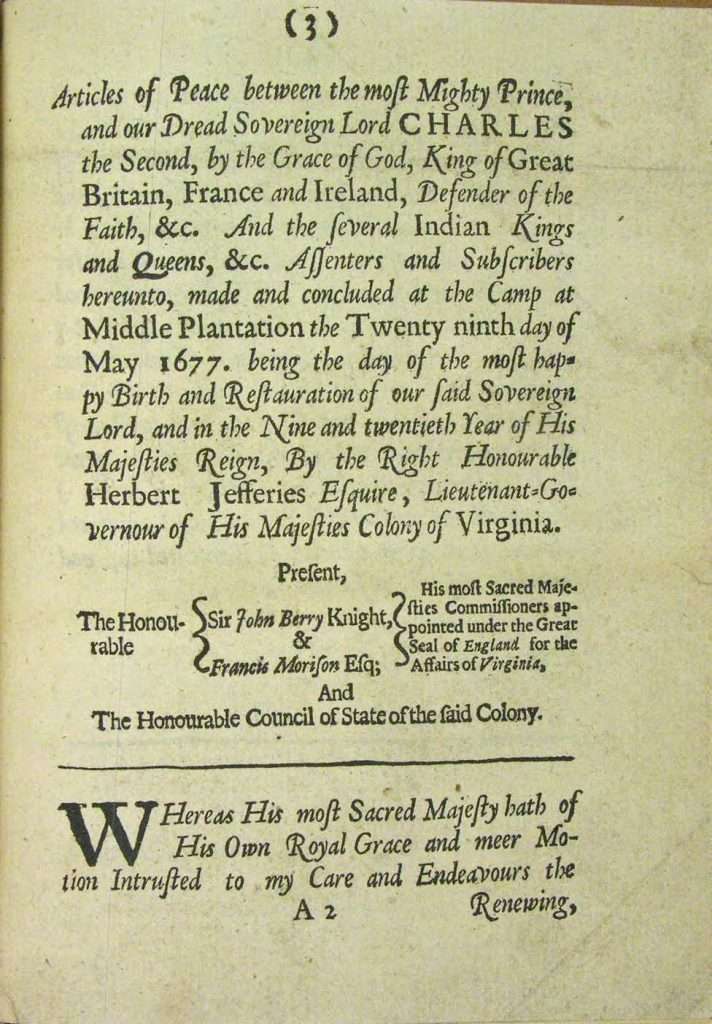 Articles of Peace between the most Mighty Prince, and our Dread Sovereign Lord CHARLES the Second, by the Grace of God, King of Great Britain, France and Ireland, Defender of the Faith, &c. And the several Indian Kings and Queens, &c. Assenters and Subscribers hereunto, made and concluded at the Camp at Middle Plantation theTwenty ninthday of May 1677.being the day of the most happy Birth and Restauration of our said Sovereign Lord, and in the Nine and twentieth Year of His Majesties Reign, By the Right Honourable Herbert Jefferies Esquire, Lieutenant-Governour of His Majesties Colony of Virginia.

His most Sacred Majesties Commissioners appointed under the Great Seal of England for the Affairs of Virginia,

The Honourable Council of State of the said Colony. 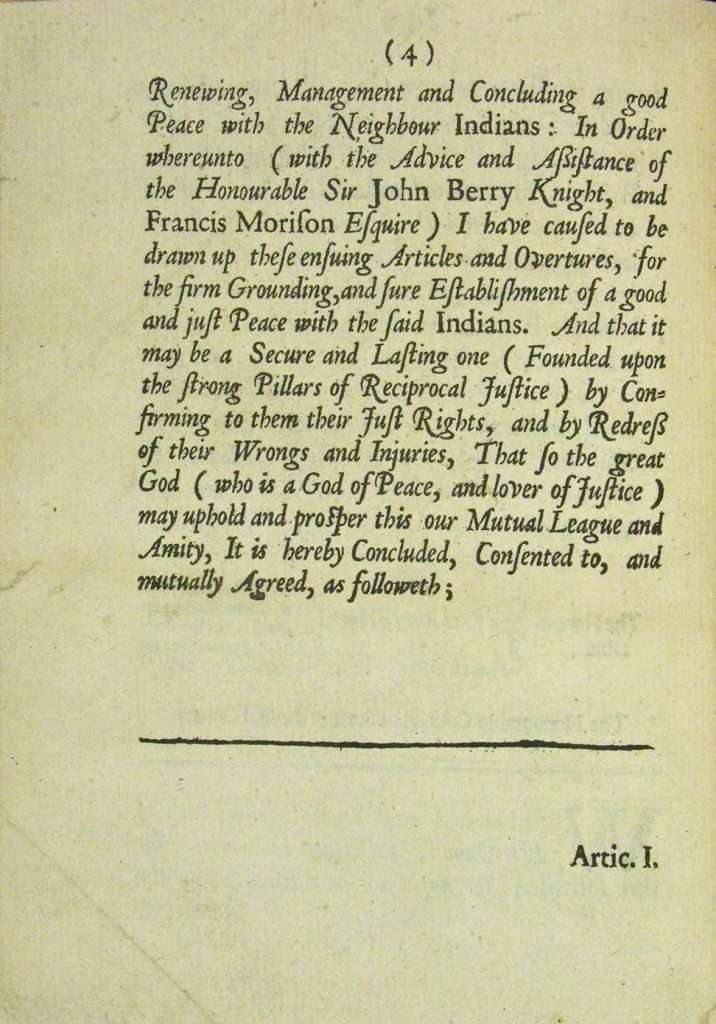 Renewing, Management and Concluding a good Peace with the Neighbour Indians: In Order whereunto (with the Advice and Assistance of the Honourable Sir John Berry Knight, and Francis Morison Esquire) I have caused to be drawn up these ensuing Articles and Overtures, for the firm Grounding, and sure Establishment of a good and just Peace with the said Indians. And that it may be a Secure and Lasting one (Founded upon the strong Pillars of Reciprocal Justice) by Confirming to them their Just Rights, and by Redress of their Wrongs and Injuries, That so the great God (who is a God of Peace, and lover of Justice) may uphold and prosper this our Mutual League and Amity, It is hereby Concluded, Consented to, and mutually Agreed, as followeth; 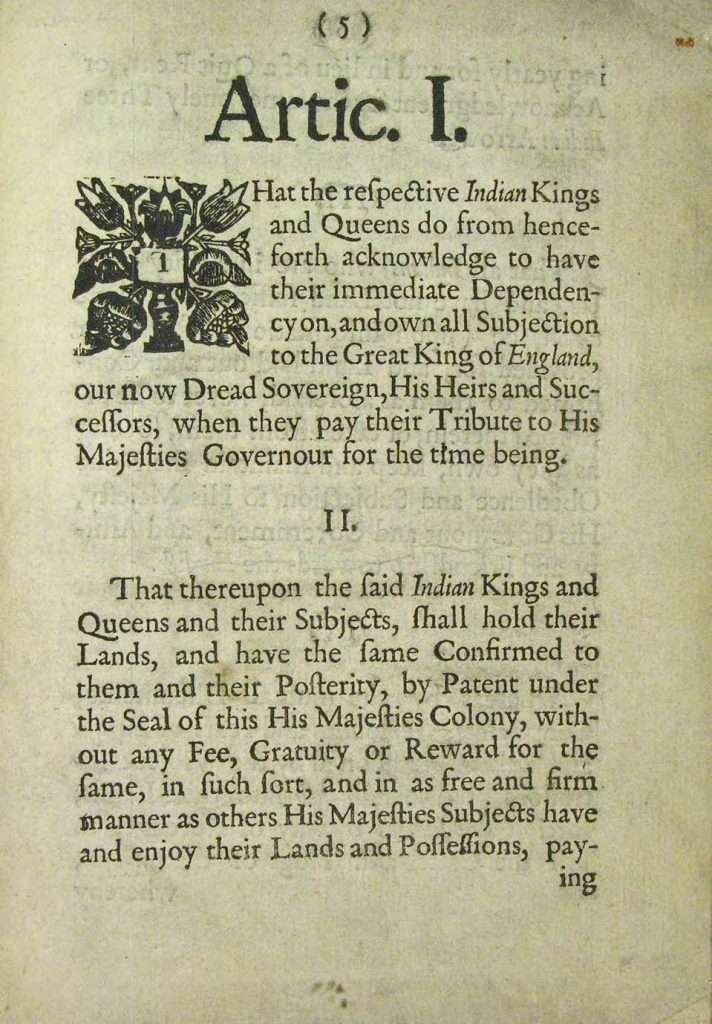 That the respective Indian Kings and Queens do from henceforth acknowledge to have their immediate Dependency on, and own all Subjection to the Great King of England, our now Dread Sovereign, His Heirs and Successors, when they pay their Tribute to His Majesties Governour for the time being.

That thereupon the said Indian Kings and Queens and their Subjects, shall hold their Lands, and have the same Confirmed to them and their Posterity, by Patent under the Seal of this His Majesties Colony, without any Fee, Gratuity or Reward for the same, in such sort, and in as free and firm manner as others His Majesties Subjects have and enjoy their Lands and Possessions, pay- 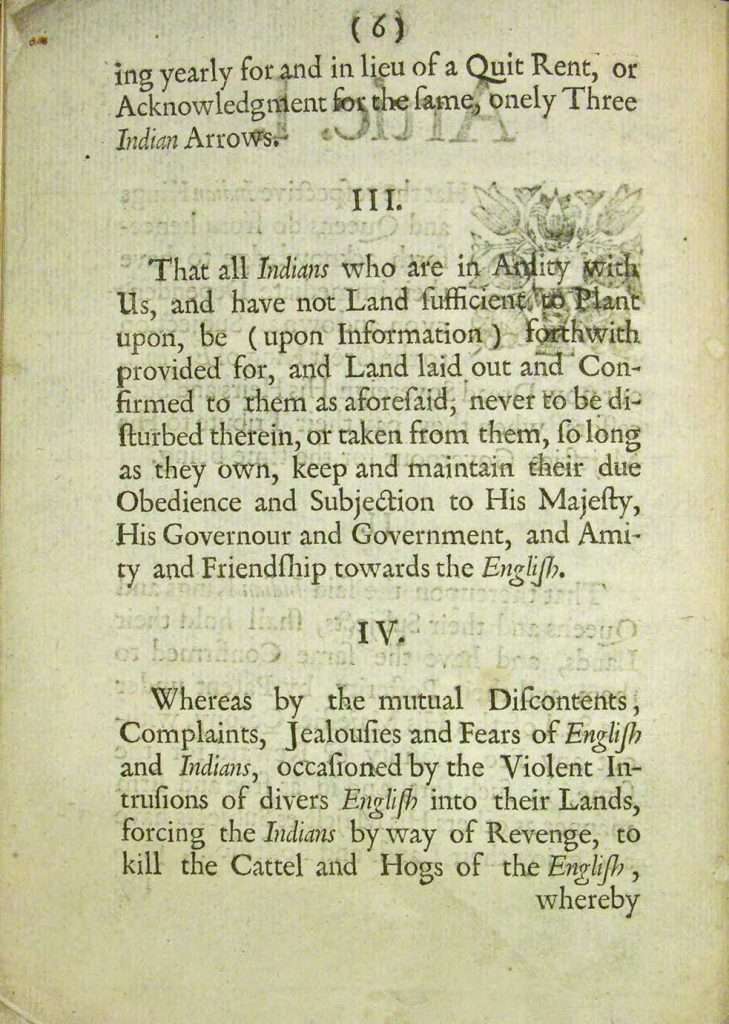 ing yearly for and in lieu of a Quit Rent, or Acknowledgment for the same, onely Three Indian Arrows.

That all Indians who are in Amity with Us, and have not Land sufficient to Plant upon, be (upon Information) forthwith provided for, and Land laid out and Confirmed to them as aforesaid, never to be disturbed therein, or taken from them, so long as they own, keep and maintain their due Obedience and Subjection to His Majesty, His Governour and Government, and Amity and Friendship towards the English.

Whereas by the mutual Discontents, Complaints, Jealousies and Fears of English and Indians, occasioned by the Violent Intrusions of divers English into their Lands, forcing the Indians by way of Revenge, to kill the Cattel and Hogs of the English, 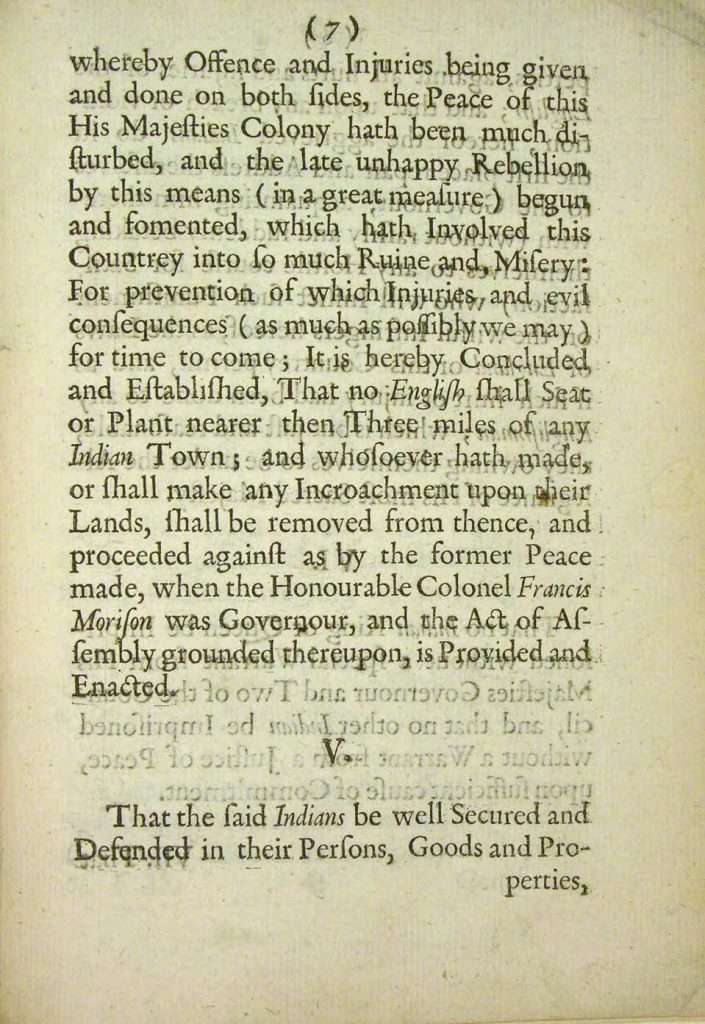 whereby Offence and Injuries being given and done on both sides, the Peace of this His Majesties Colony hath been much disturbed, and the late unhappy Rebellion by this means (in a great measure) begun and fomented, which hath Involved this Countrey into so much Ruine and Misery: For prevention of which Injuries and evil consequences (as much as possibly we may) for time to come; It is hereby Concluded and Established, That no English shall Seat or Plant nearer then Three miles of any Indian Town; and whosoever hath made, or shall make an Incroachment upon their Lands, shall be removed from thence, and proceeded against as by the former Peace made, when the Honourable Colonel Francis Morison was Governour, and the Act of Assembly grounded thereupon, is Provided and Enacted.

That the said Indians be well Secured and Defended in their Persons, Goods and Pro- 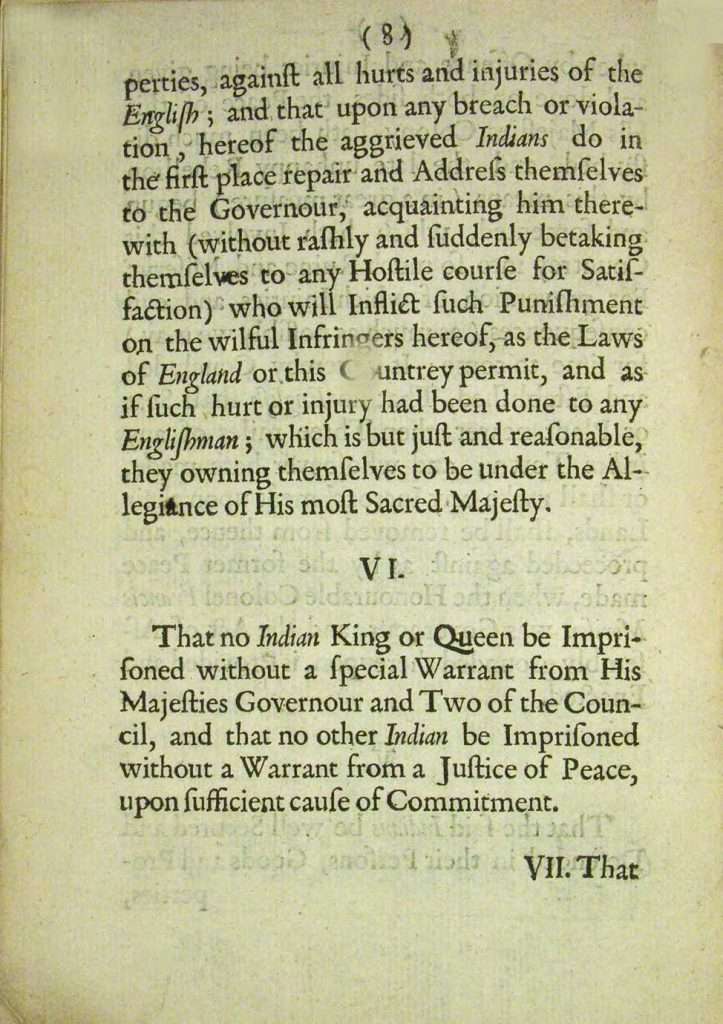 perties, against all hurts and injuries of the English; and that upon any breach or violation, hereof the aggrieved Indians do in the first place repair and Address themselves to the Governour, acquainting him therewith (without rashly and suddenly betaking themselves to any Hostile course for Satisfaction) who will Inflict such Punishment on the wilful Infringers hereof, as the Laws of England or this Countrey permit, and as if such hurt or injury had been done to any Englishman; which is but just and reasonable, they owning themselves to be under the Allegiance of His most Sacred Majesty. 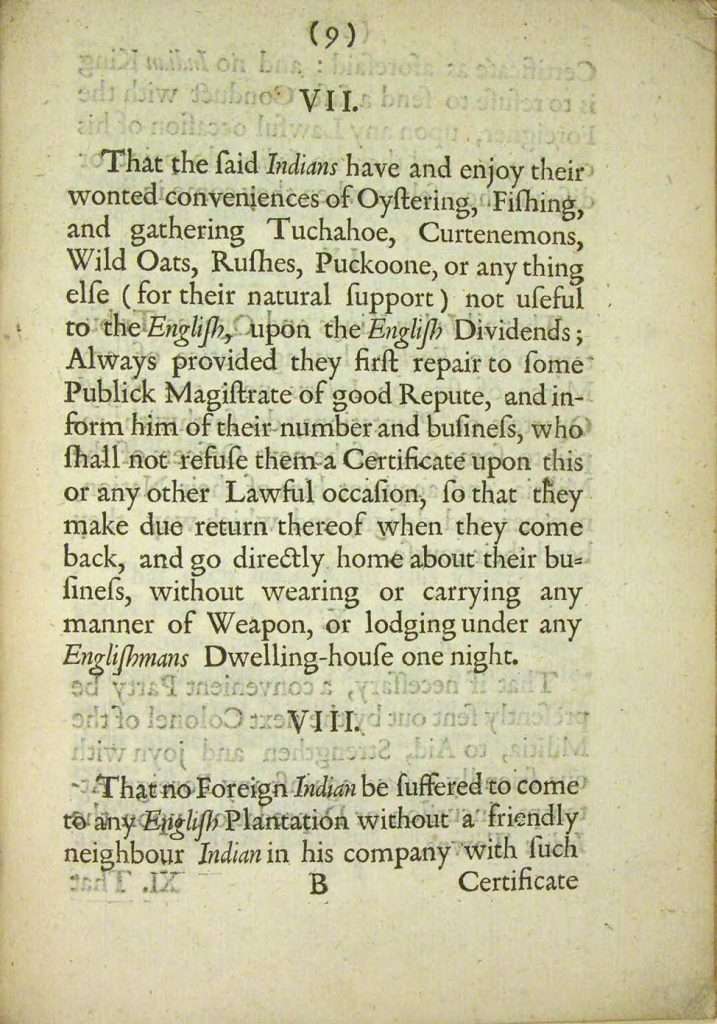 That the said Indians have and enjoy their wonted conveniences of Oystering, Fishing, and gathering Tuchahoe, Curtenemons, Wild Oats, Rushes, Puckoone, or anything else (for their natural support) not useful to the English, upon the English Dividends; Always provided they first repair to some Publick Magistrate of good Repute, and inform him of their number and business, who shall not refuse them a Certificate upon this or any other Lawful occasion, so that they make due return thereof when they come back, and go directly home about their business, without wearing or carrying any manner of Weapon, or lodging under any Englishmans Dwelling-house one night. 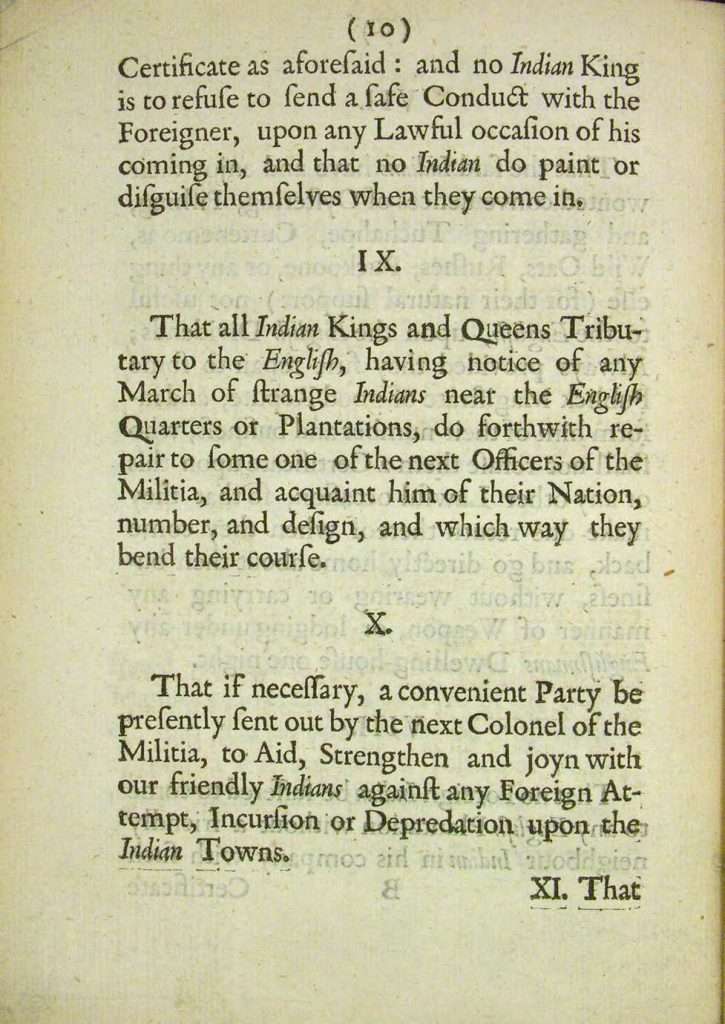 Certificate as aforesaid: and no Indian King is to refuse to send a safe Conduct with the Foreigner, upon any Lawful occasion of his coming in, and that no Indian do paint or disguise themselves when they come in.

That all Indian Kings and Queens Tributary to the English, having notice of any March of strange Indians near the English Quarters or Plantations, do forthwith repair to some one of the next Officers of the Militia, and acquaint him of their Nation, number, and design, and which way they bend their course.

That if necessary, a convenient Party be presently sent out by the next Colonel of the Militia, to Aid, Strengthen and joyn with our friendly Indians against any Foreign Attempt, Incursion or Depredation upon the Indian Towns. 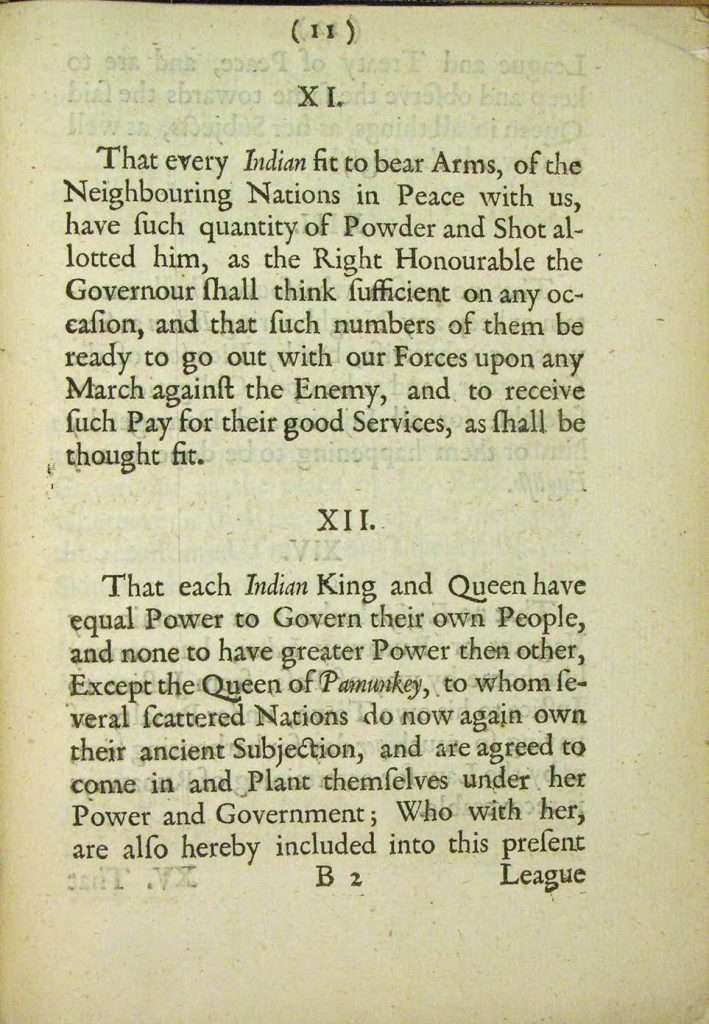 That every Indian fit to bear Arms, of the Neighbouring Nations in Peace with us, have such quantity of Powder and Shot allotted him, as the Right Honourable the Governour shall think sufficient on any occasion, and that such numbers of them be ready to go out with our Forces upon any March against the Enemy, and to receive such Pay for their good Services, as shall be thought fit.

That each Indian King and Queen have equal Power to Govern their own People, and none to have greater Power then other, Except the Queen of Pamunkey, to whom several scattered Nations do now again own their ancient Subjection, and are agreed to come in and Plant themselves under her Power and Governmet; Who with her, are also hereby included into this present 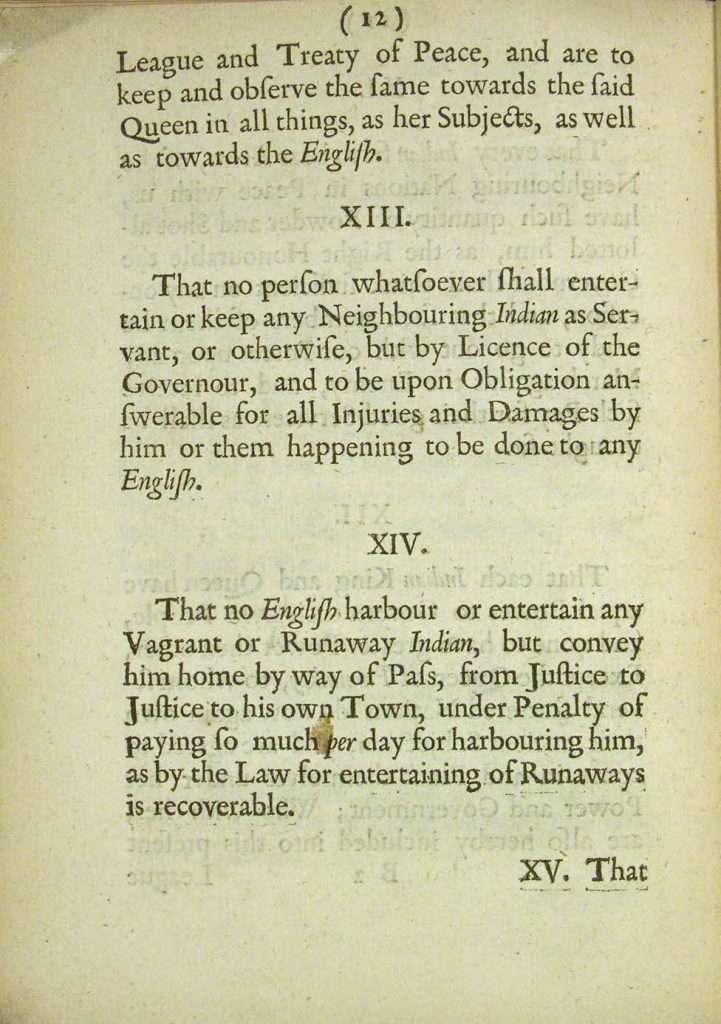 League and Treaty of Peace, and are to keep and observe the same towards the said Queen in all things, as her Subjects, as well as towards the English.

That no person whatsoever shall entertain or keep any Neighbouring Indian as Servant, or otherwise, but by Licence of the Governour, and to be upon Obligation answerable for all Injuries and Damages by him or them happening to be done to any English.

That no English harbour or entertain any Vagrant or Runaway Indian, but convey him home by way of Pass, from Justice to Justice to his own Town, under Penalty of paying so much per day for harbouring him, as by the Law for entertaining of Runaways is recoverable. 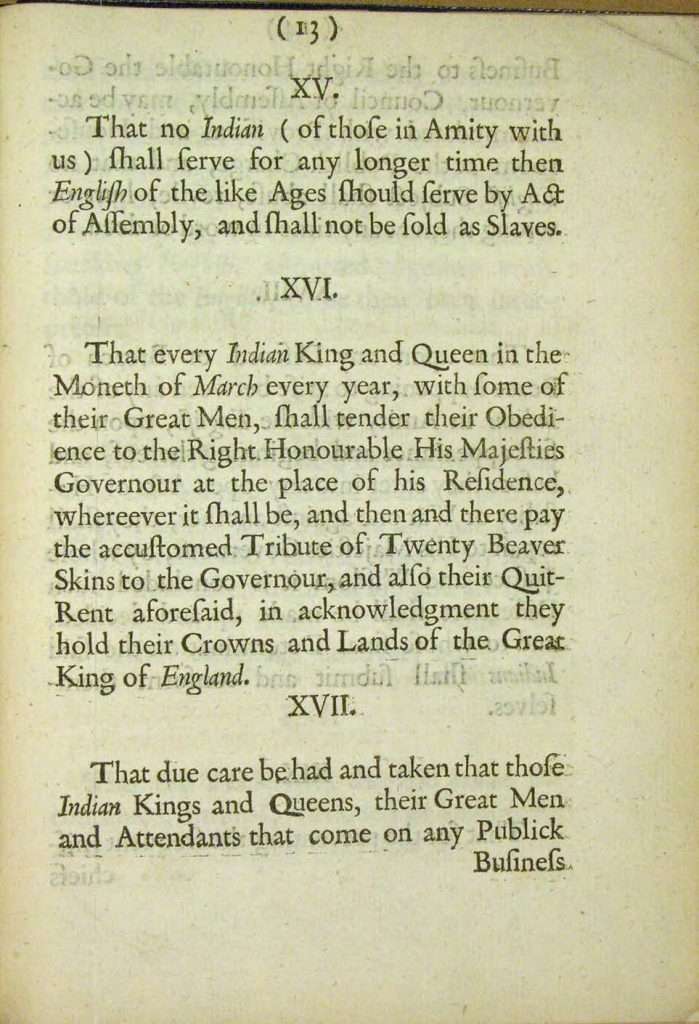 That no Indian (of those in Amity with us) shall serve for any longer time then English of the like Ages should serve by Act of Assembly, and shall not be sold as Slaves.

That every Indian King and Queen in the Moneth of March every year, with some of their Great Men, shall tender their Obedience to the Right Honourable His Majesties Governour at the place of his Residence, whereever it shall be, and then and there pay the accustomed Tribute of Twenty Beaver Skins to the Governour, and also their Quit-Rent aforesaid, in acknowledgment they hold their Crowns and Lands of the Great King of England.

That due care be had and taken that those Indian Kings and Queens, their Great Men and Attendants that come on any Publick 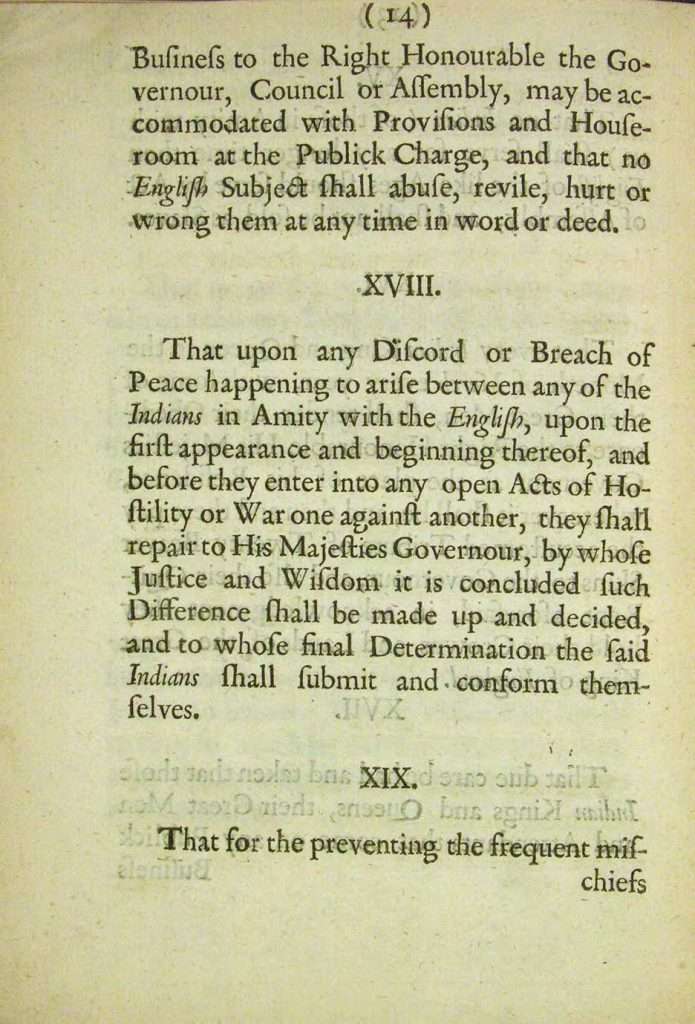 Business to the Right Honourable the Governour, Council or Assembly, may be accommodated with Provisions and Houseroom at the Publick Charge, and that no English Subject shall abuse, revile, hurt or wrong them at any time in word or deed.

That upon any Discord or Breach of Peace happening to arise between any of the Indians in Amity with the English, upon the first appearance and beginning thereof, and before they enter into any open Acts of Hostility or War one against another, they shall repair to His Majesties Governour, by whose Justice and Wisdom it is concluded such Difference shall be made up and decided, and to whose final Determination the said Indians shall submit and conform themselves.

That for the preventing the frequent mis- 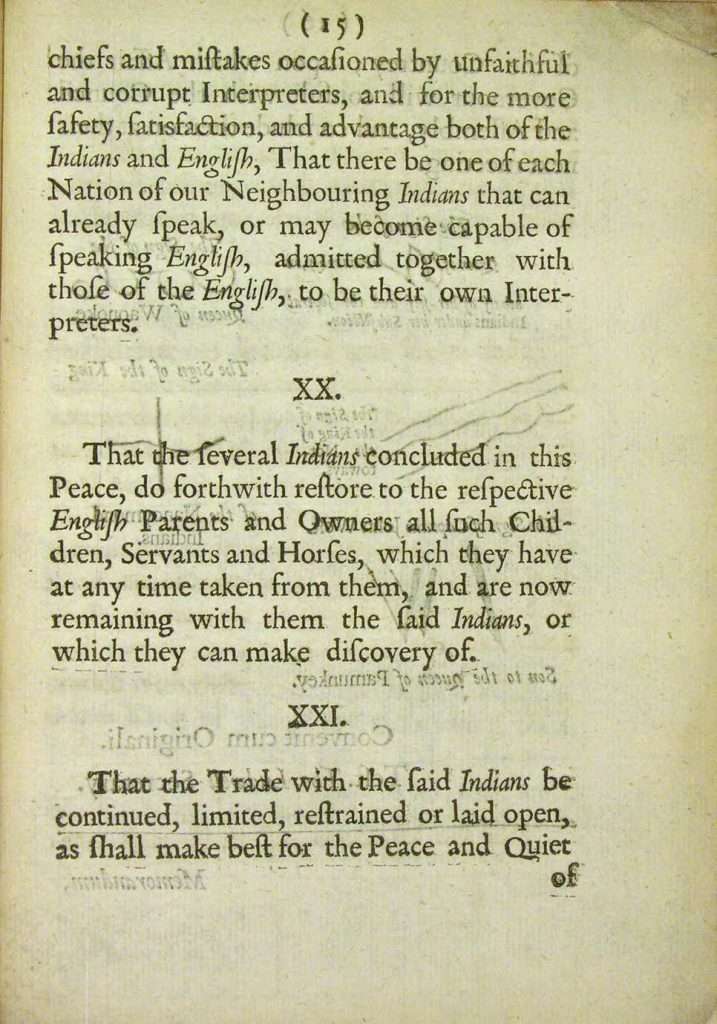 chiefs and mistakes occasioned by unfaithful and corrupt Interpreters, and for the more safety, satisfaction, and advantage both of the Indians and English, That there be one of reach Nation of our Neighbouring Indians that can already speak, or may become capable of speaking English, admitted together with those of the English, to be their own Interpreters.

That the several Indians concluded in this Peace, do forthwith restore to the respective English Parents and Owners all such Children, Servants and Horses, which they have at any time taken from them, and are now remaining with them the said Indians, or which they can make discovery of.

That the Trade with the said Indians be continued, limited, restrained or laid open, as shall make best for the Peace and Quiet 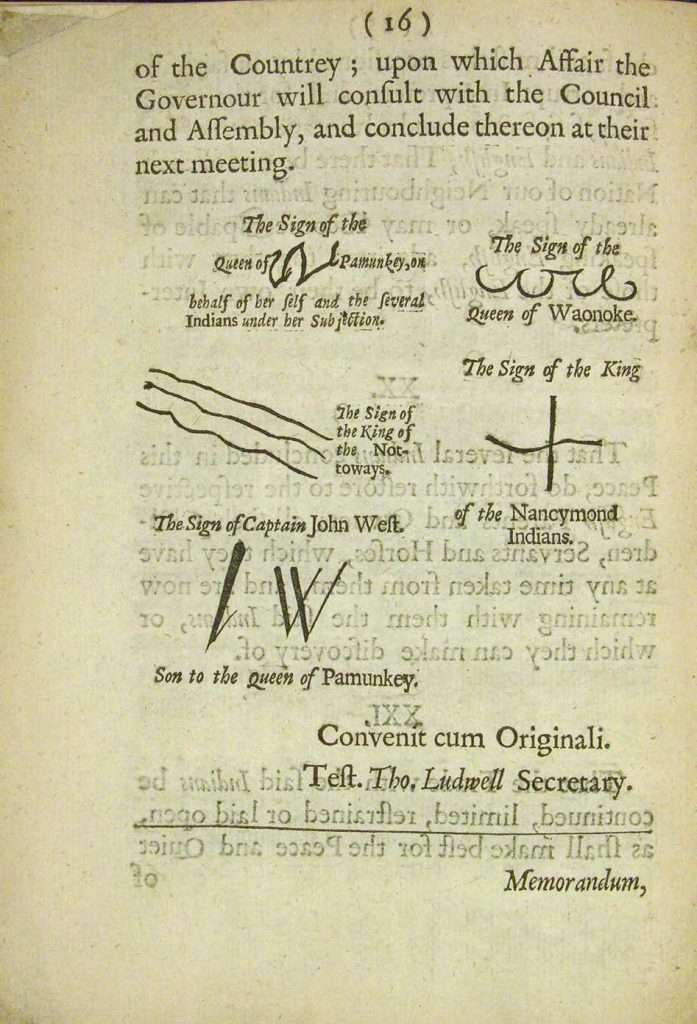 of the Countrey; upon which Affair the Governour will consult with the Council and Assembly, and conclude thereon at their next meeting.

The Sign of the Queen of Pamunkey, on behalf of her self and the several Indians under her Subjection.

The Sign of the King of the Nancymond Indians.

The Sign of Captain John West. Son to the Queen of Pamunkey. 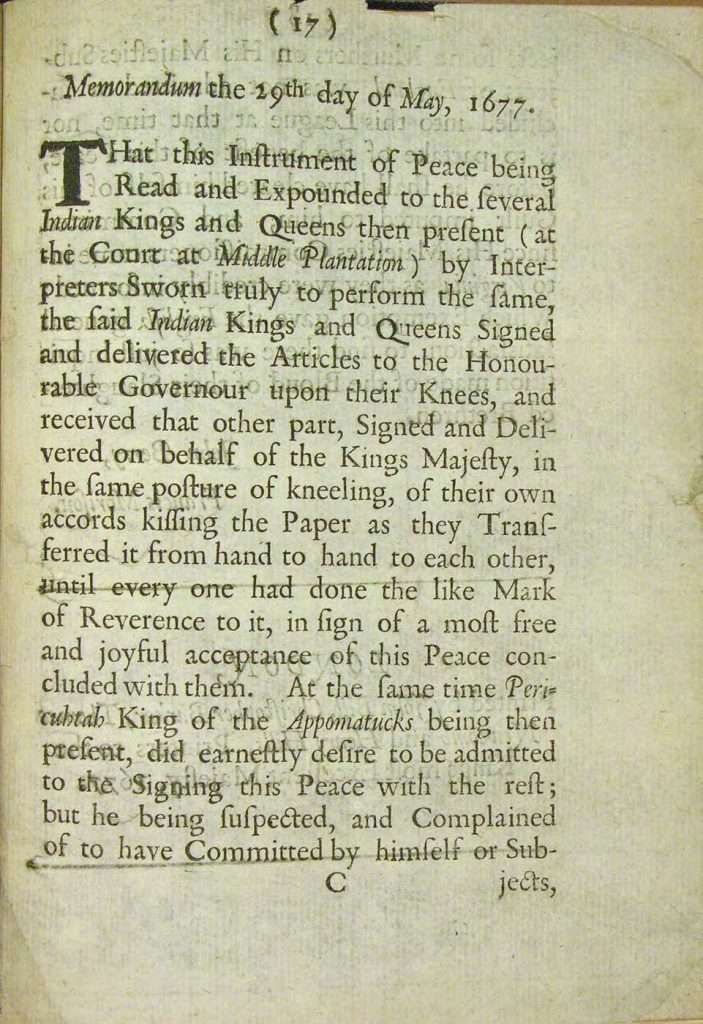 That this Instrument of Peace being Read and Expounded to the several Indian Kings and Queens then present (at the Court at Middle Plantation) by Interpreters Sworn truly to perform the same, the said Indian Kings and Queens Signed and delivered the Articles to the Honourable Governour upon their Knees, and received that other part, Signed and Delivered on behalf of the Kings Majesty, in the same posture of kneeling, of their own accords kissing the Paper as they Transferred it from hand to hand to each other, until every one had done the like Mark of Reverence to it, in sign of a most free and joyful acceptance of this Peace concluded with them. At the same time Pericuhtah King of the Appomatucks being then present, did earnestly desire to be admitted to the Signing this Peace with the rest; but he being suspected, and Complained of to have Committed by himself or Sub- 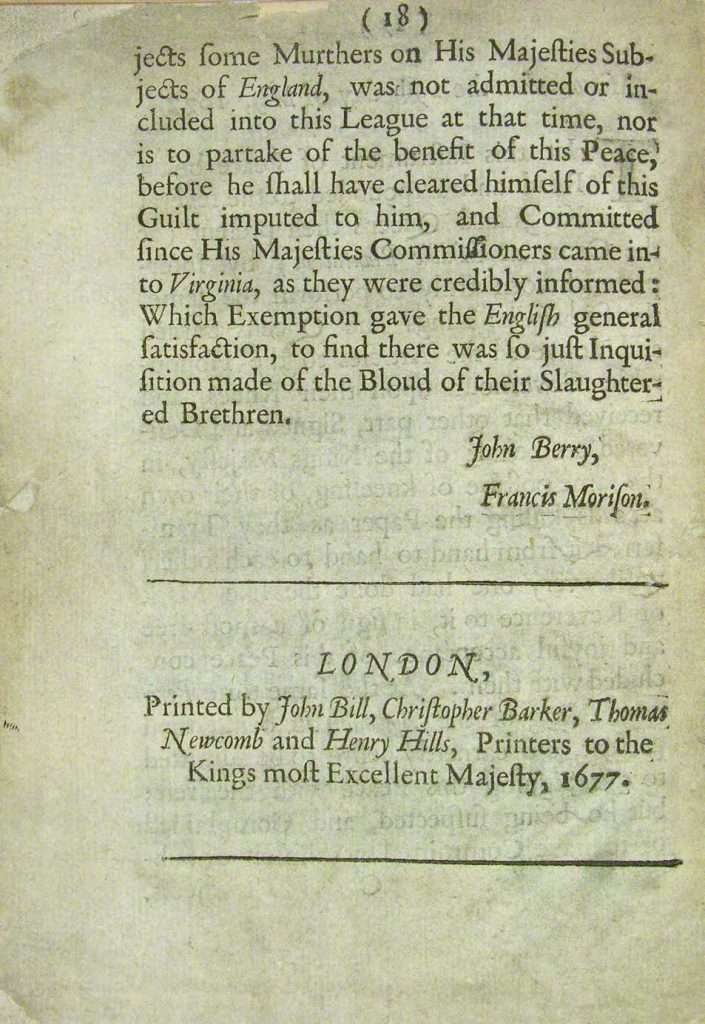 jects, some Murthers on His Majesties Subjects of England, was not admitted or included into this League at that time, nor is to partake of the benefit of this Peace, before he shall have cleared himself of this Guilt imputed to him, and Committed since His Majesties Commissioners came into Virginia, as they were credibly informed: Which Exemption gave the English general satisfaction, to find there was so just Inquisition made of the Bloud of their Slaughtered Brethren.

RELATED CONTENT
Categories:
Type:
MAP
TIMELINE
May 29, 1677
Cockacoeske signs the Treaty of Middle Plantation, and at her request several tribes are reunited under her authority. But having been free of Powhatan domination since 1646, the Chickahominy and Rappahannock stubbornly refuse to become subservient to her or to pay tribute.
CITE THIS ENTRY