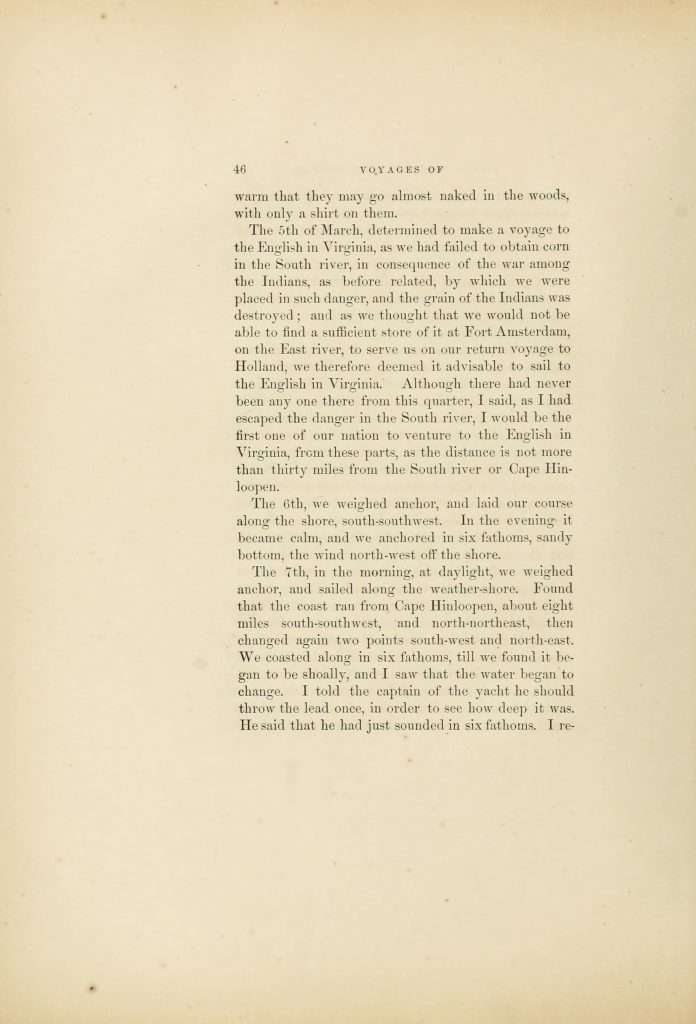 Voyages from Holland to America, Page 46

The 5th of March, determined to make a voyage to the English in Virginia, as we had failed to obtain corn in the South river, in consequence of the war among the Indians, as before related, by which we were placed in such danger, and the grain of the Indians was destroyed; and as we thought that we would not be able to find a sufficient store of it at Fort Amsterdam, on the East river, to serve us on our return voyage to Holland, we therefore deemed it advisable to sail to the English in Virginia. Although there had never been any one there from this quarter, I said, as I had escaped danger in the South river, I would be the first one of our nation to venture to the English in Virginia, from these parts, as the distance is not more than thirty miles from the South river or Cape Hinloopen. 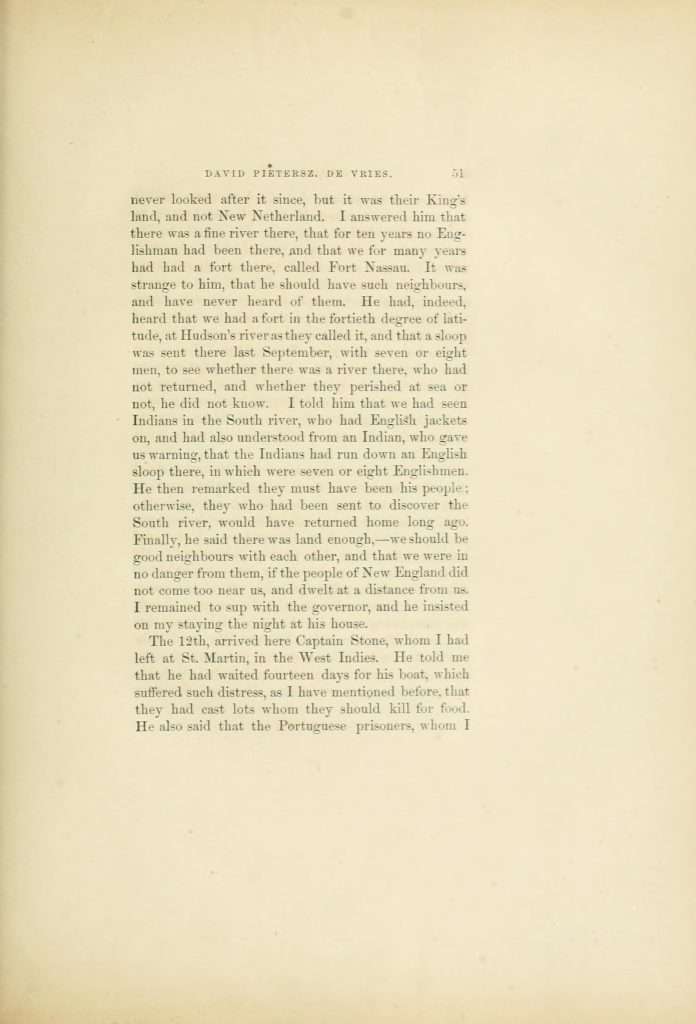 Voyages from Holland to America, Page 51

The 12th, arrived here Captain Stone, whom I had left at St. Martin, in the West Indies. He told me that he had waited fourteen days for his boat, which suffered such distress, as I have mentioned before, that they had cast lots whom they should kill for food. He also said that the Portuguese prisoners, whom I 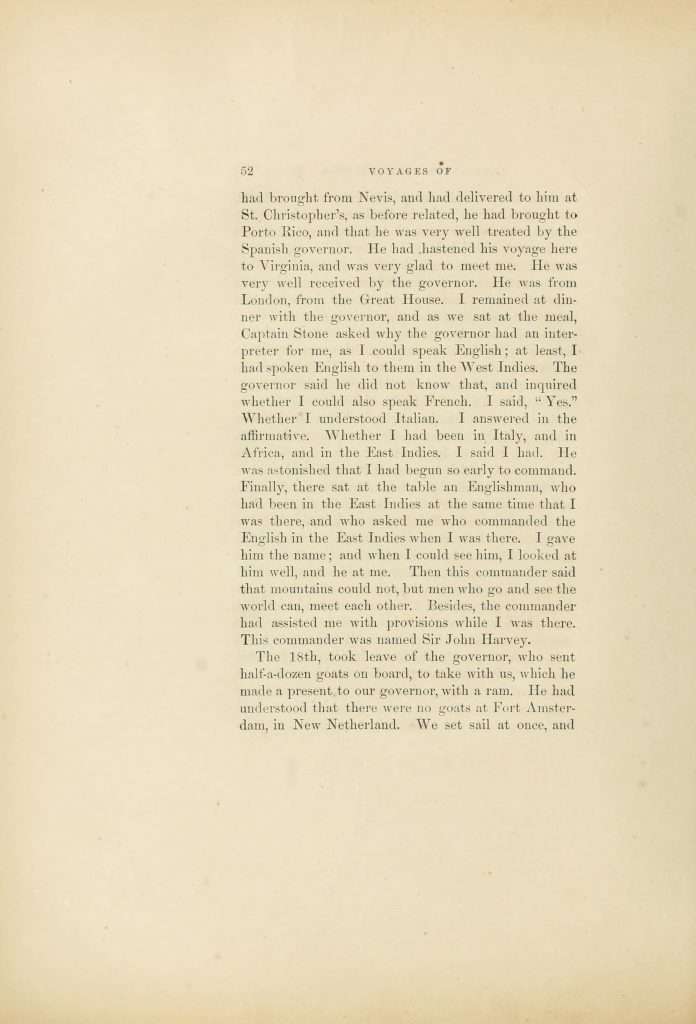 Voyages from Holland to America, Page 52

had brought from Nevis, and had delivered to him at St. Christopher’s, as before related, he had brought to Porto Rico, and that he was very well treated by the Spanish governor. He had hastened his voyage here to Virginia, and was very glad to meet me. He was very well received by the governor. He was from London, from the Great House. I remained at dinner with the governor, and as we sat at the meal, Captain Stone asked why the governor had an interpreter for me, as I could speak English; at least, I had spoken English to them in the West Indies. The governor said he did not know that, and inquired whether I could also speak French. I said, “Yes.” Whether I understood Italian. I answered in the affirmative. Whether I had been in Italy, and in Africa, and in the East Indies. I said I had. He was astonished that I had begun so early to command. Finally, there sat at the table an Englishman, who had been in the East Indies at the same time that I was there, and who asked me who commanded the English in the East Indies when I was there. I gave him the name; and when I could see him, I looked at him well, and he at me. Then this commander said that mountains could not, but men who go and see the world can, meet each other. Besides, the commander had assisted me with provisions while I was there. This commander was named Sir John Harvey.

The 18th, took leave of the governor, who sent half-a-dozen goats on board, to take with us, which he made a present to our governor, with a ram. He had understood that there were no goats at Fort Amsterdam, in New Netherland. We set sail at once, and 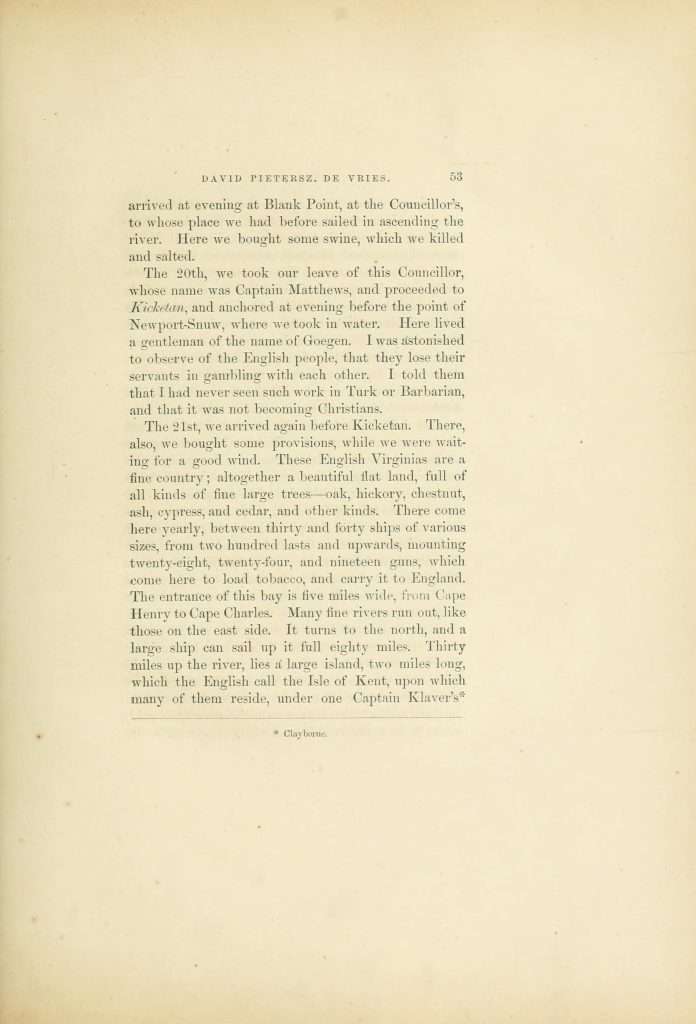 Voyages from Holland to America, Page 53

arrived at evening at Blank Point, at the Councillor’s, to whose place we had before sailed in ascending the river. Here we bought some swine, which we killed and salted.

The 20th, we took our leave of this Councillor, whose name was Captain Matthews, and proceeded to Kicketan, and anchored at evening before the point of Newport-Snuw, where we took in water. Here lived a gentleman of the name of Goegen. I was astonished to observe of the English people, that they lose their servants in gambling with each other. I told them that I had never seen such work in Turk or Barbarian, and that it was not becoming Christians.

The 21st, we arrived again before Kicketan. There, also, we bought some provisions, while we were waiting for a good wind. These English Virginias are a fine country; altogether a beautiful flat land, full of all kinds of fine large trees—oak, hickory, chestnut, ash, cypress, and cedar, and other kinds. There come here yearly, between thirty and forty ships of various sizes, from two hundred lasts and upwards, mounting twenty-eight, twenty-four, and nineteen guns, which come here to load tobacco, and carry it to England. The entrance of this bay is five miles wide, from Cape Henry to Cape Charles. Many fine rivers run out, like those on the east side. It turns to the north, and a large ship can sail up it full eighty miles. Thirty miles up the river, lies a large island, two miles long, which the English call the Isle of Kent, upon which many of them reside, under one Captain Klaver’s [Clayborne] 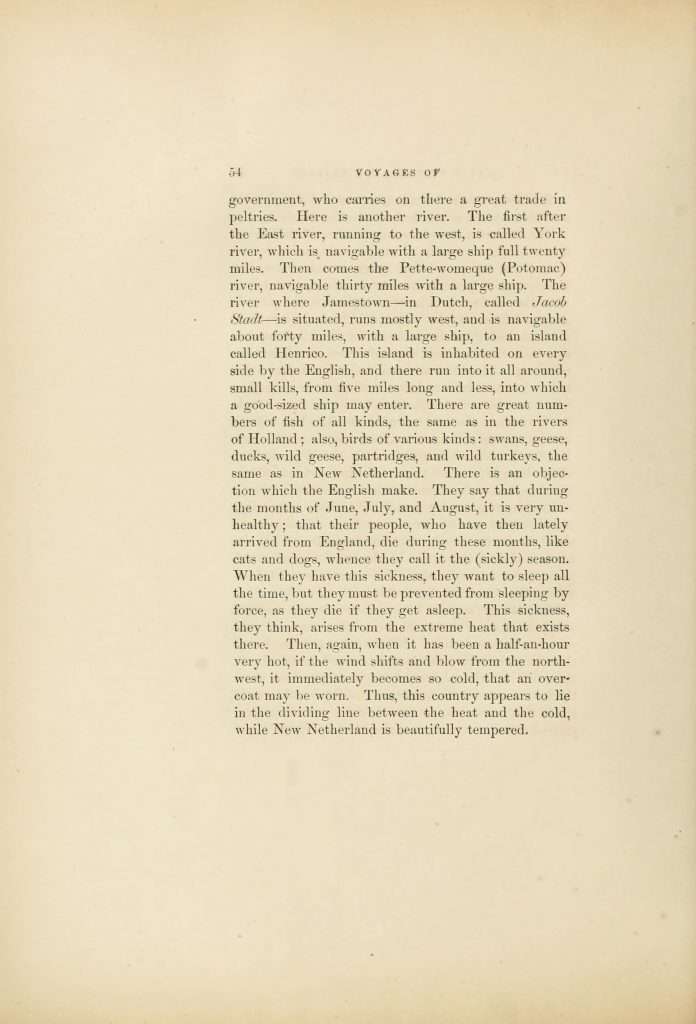 Voyages from Holland to America, Page 54

government, who carries on there a great trade in peltries. Here is another river. The first after the East river, running to the west, is called York river, which is navigable with a large ship full twenty miles. Then comes the Pette-womeque (Potomac) river, navigable thirty miles with a large ship. The river where Jamestown—in Dutch, called Jacob Stadt—is situated, runs mostly west, and is navigable about forty miles, with a large ship, to an island called Henrico. This island is inhabited on every side by the English, and there run into it all around, small kills, from five miles long and less, into which a good-sized ship may enter. There are great numbers of fish of all kinds, the same as in the rivers of Holland; also, birds of various kinds: swans, geese, ducks, wild geese, partridges, and wild turkeys, the same as in New Netherland. There is an objection which the English make. They say that during the months of June, July, and August, it is very unhealthy; that their people, who have then lately arrived from England, die during these months, like cats and dogs, whence they call it the (sickly) season. When they have this sickness, they want to sleep all the time, but they must be prevented from sleeping by force, as they die if they get asleep. This sickness, they think, arises from the extreme heat that exists there. Then, again, when it has been a half-an-hour very hot, if the wind shifts and blow from the northwest, it immediately becomes so cold, that an overcoat may be worn. Thus, this country appears to lie in the dividing line between the heat and the cold, while New Netherland is beautifully tempered.