John Armfield was born in 1797 in Guilford County, North Carolina, the son of Nathan Armfield and Polly Dempsey Armfield. The couple also had two daughters, while another son died at the age of sixteen. The Armfields descended from a Quaker immigrant from England and were Loyalists during the American Revolution (1775–1783). John Armfield’s grandfather was disowned from his local meeting in 1785, possibly for having taken up arms in the cause. The family was allowed to rejoin in 1799.

Nothing is known of John Armfield’s childhood and education. The family owned at least one slave and were not listed among the local Quakers. On some unknown date, Armfield left home and worked as a stagecoach driver. 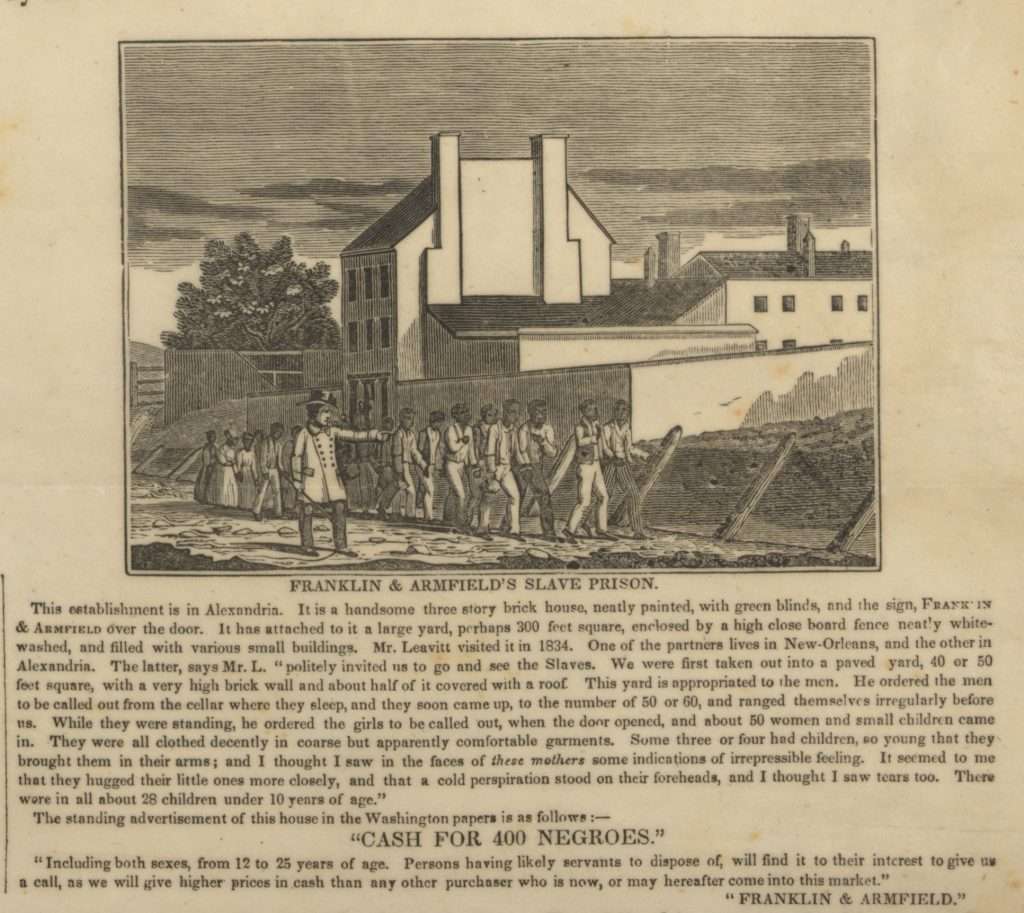 About 1824 Armfield met Isaac Franklin, and the two traveled together to Sumner County, Tennessee, just north of Nashville. Franklin had been working as a slave trader since 1810, and he took Armfield on as his partner. The earliest known record of Armfield selling a slave dates to 1827, in Natchez, Mississippi. The next year, the two founded Franklin and Armfield, with Franklin based in Natchez and Armfield in Alexandria, Virginia. In 1831, Armfield married Franklin’s sixteen-year-old niece, Martha Franklin. They had no children. At some point Franklin had joined the Episcopal Church, and his wife, raised a Presbyterian, joined, too. 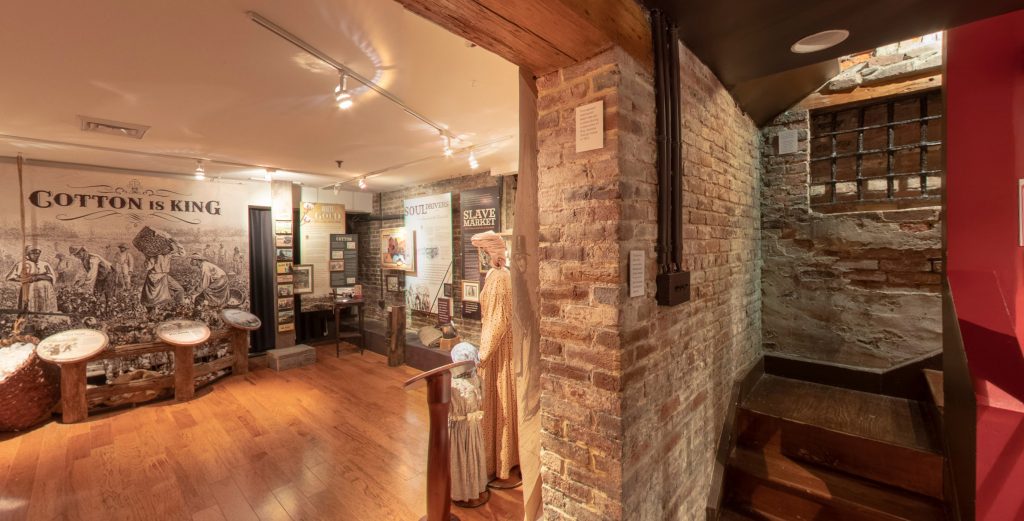 Franklin and Armfield became one of the largest slave-trading firms in the South. Smaller traders—sometimes, as in the case of Silas Omohundro, acting as agents on the firm’s behalf—purchased enslaved men, women, and children across the Upper South and sent them to Alexandria. There they were held at the complex run by Armfield and located at 1315 Duke Street, on the city’s outskirts. An elegant, three-story building with two chimneys fronted Duke Street. Armfield’s offices were on the ground floor and the residence was upstairs, while the enslaved prisoners, awaiting sale or transportation south and segregated by sex, were kept in a two-story wing attached to the house. Various other buildings, including a kitchen, tailor’s shop, and hospital, as well as a courtyard, were all hidden behind a whitewashed wall. 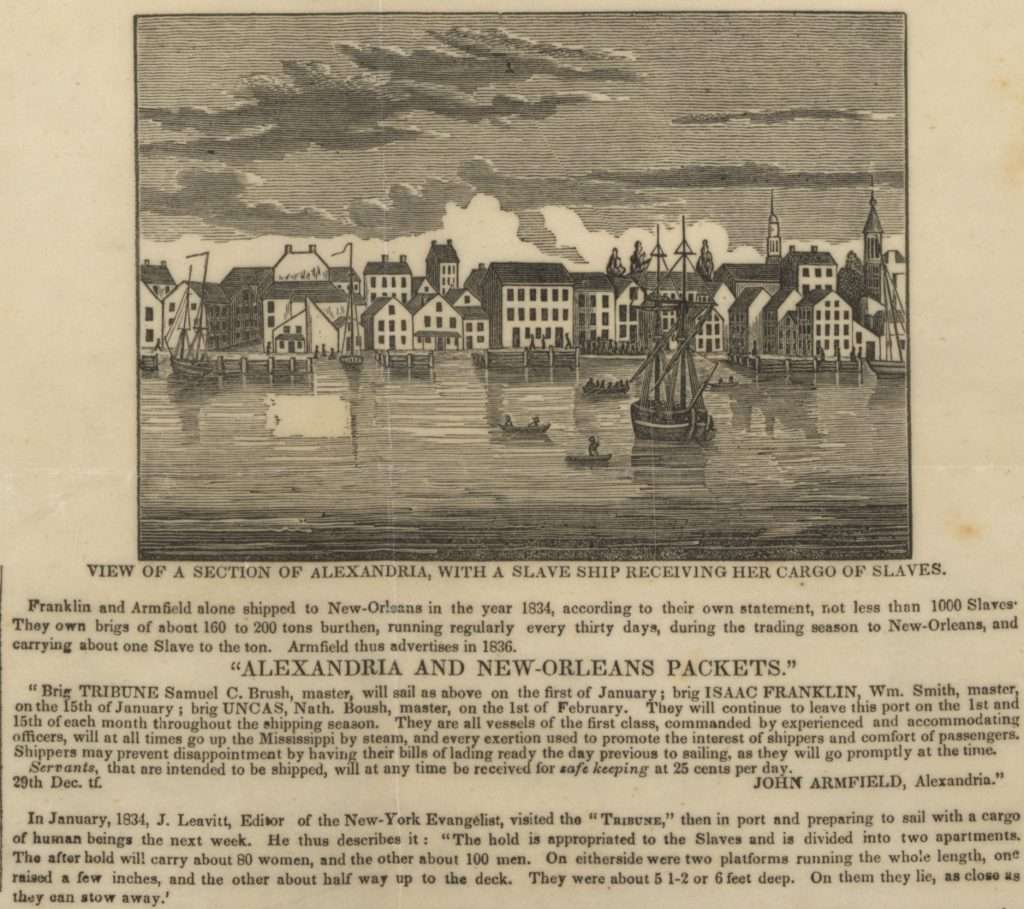 View of a Section of Alexandria

While the Upper South had an abundance of enslaved labor, the Lower South was always in short supply and planters there paid the best prices. Franklin and Armfield regularly sent its slaves south, either overland to Franklin’s office in Natchez, a trip that took seven to eight weeks by foot, or by sea. The latter method, a Franklin and Armfield innovation, was quicker, more reliable, and allowed for more precise scheduling. And ships making a return voyage could be laden with sugar, molasses, whiskey, or cotton, for sale and additional profits. By 1829, Franklin and Armfield owned the coastal brig United States, and within six years had purchased at least three more: the Tribune, the Uncas, and the Isaac Franklin. Vessels initially departed once a month but soon began making runs every other week, landing in New Orleans. Slaves bound for Natchez would be met by the firm’s associate Rice C. Ballard, who sent them upriver by paddleboat. In January 1831, the Comet, a coastal brig carrying 164 enslaved people, including 76 owned by Franklin and Armfield, wrecked in the Bahamas. While waiting on repairs in Nassau, 11 slaves escaped, were captured but then declared free by the British governor. The firm eventually collected $37,555 in insurance claims on the enslaved people it lost.

Between 1828 and 1835, Franklin and Armfield sold an average of 1,200 enslaved people per year. Those who traveled south by boat, by law, had their names and ages recorded. A statistical analysis by the historian Donald Sweig indicates that most of the slaves transported by the firm during these years were young men and women, without families. More than 80 percent of the women had no husbands and most had no children. The great majority were under twenty-five years old. Almost half of the women were under sixteen. Prior to 1829, when Louisiana law prohibited it, the firm sold enslaved children under the age of ten. From 1833 to 1835, probably in response to pressure from abolitionist and more moderate antislavery groups, or from local planters who themselves felt social pressure, the firm avoided separating family groups. While families were always a small part of the business—at times totaling about 7 percent of all sales—that percentage doubled during those years.

The rewards for this business were enormous. In the year from 1831 to 1832, the firm counted $250,000 in bills receivable, and profited as much as $100,000 per year. Isaac Franklin became a millionaire while Armfield, the firm’s junior partner, was worth about half that. Both men sought to cultivate a polished and gentlemanly air, which was at odds with the popular and socially restricting notion that slave traders were involved in a dirty, disreputable business.

On July 24, 1835, the abolitionist and lexicographer Ethan A. Andrews visited the firm’s Alexandria offices and described Armfield as “a man of fine personal appearance, and of engaging and graceful manners.” That same year, the British geologist G. W. Featherstonhaugh encountered Armfield while traveling. He was “a queer, tall animal about forty years old,” Featherstonhaugh wrote, “with dark black hair cut round as if he were a Methodist preacher, immense black whiskers, a physiognomy not without one or two tolerable features, but singularly sharp, and not a little piratical and repulsive.” 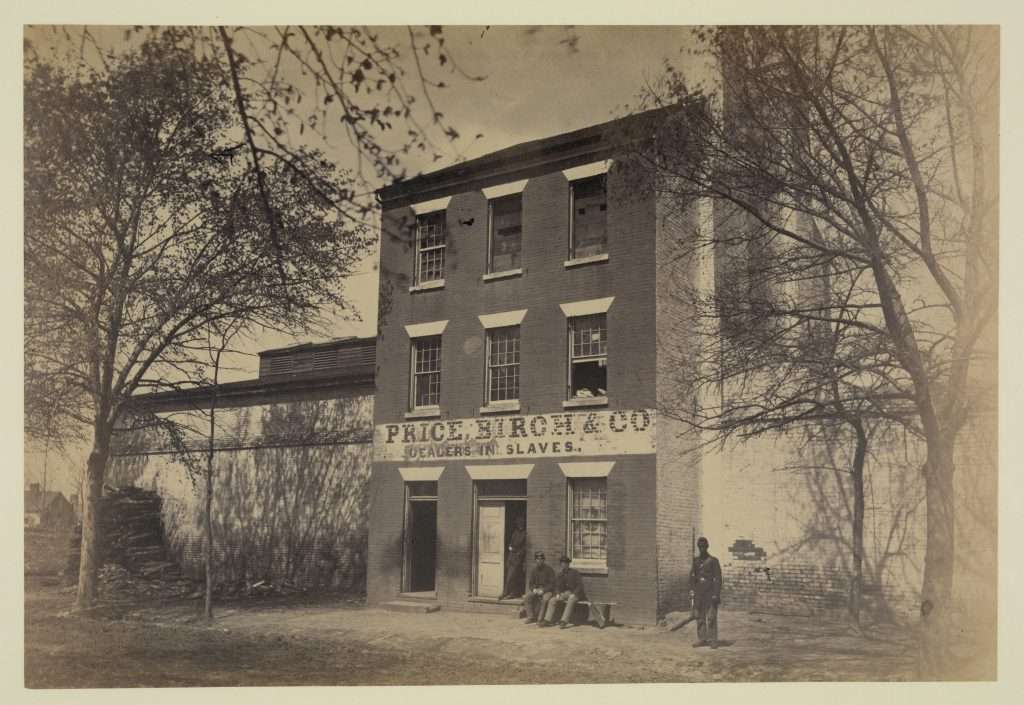 The Slave Trade in Alexandria

In November 1836, Franklin and Armfield’s last shipment, consisting of 254 enslaved people, went to New Orleans aboard the Isaac Franklin. Soon after, the two men sold their firm and its ships. The residence and slave jail on Duke Street went to George Kephart, their agent in Frederick, Maryland. Early in the 1850s it was sold to the slave-trading firm of Price, Birch, and Company, which owned it at the time Union troops first occupied the city in 1861, during the Civil War. 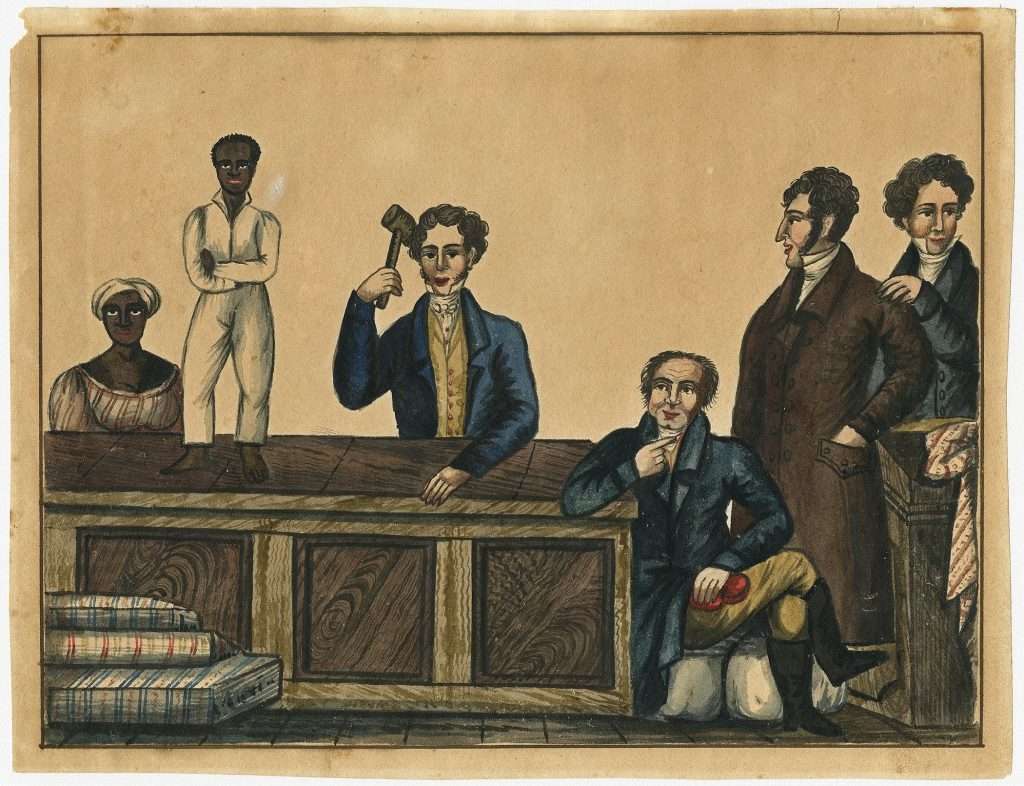 Isaac Franklin quit trading and purchased six properties in Louisiana and one in Tennessee, totaling more than 10,600 acres worked by 700 enslaved people. When he died unexpectedly, on April 27, 1846, his estate was worth between $500,000 and $750,000. At the time, Armfield and his wife had been living with the Franklin family in West Feliciana Parish, Louisiana. Armfield preserved the body in whiskey and transported it to Franklin’s native Tennessee. Armfield and Franklin’s father-in-law served as executors of Franklin’s estate, and disputes involving the disbursement led to a lawsuit that was not settled until 1854, in Armfield’s favor.

By 1849, Armfield and his wife had settled in Sumner County, Tennessee. He purchased 339 acres and a two-story brick house—an estate called Hard Times and later Grasslands—for $6,000. He added a house and mill for another $6,000. A year later the property had slimmed to 300 acres of improved land, worked by fifteen slaves. At the same time Armfield remained active in business, working as a cotton broker in New Orleans while handling the settlement of assets for the defunct company Franklin had created with Rice Ballard. 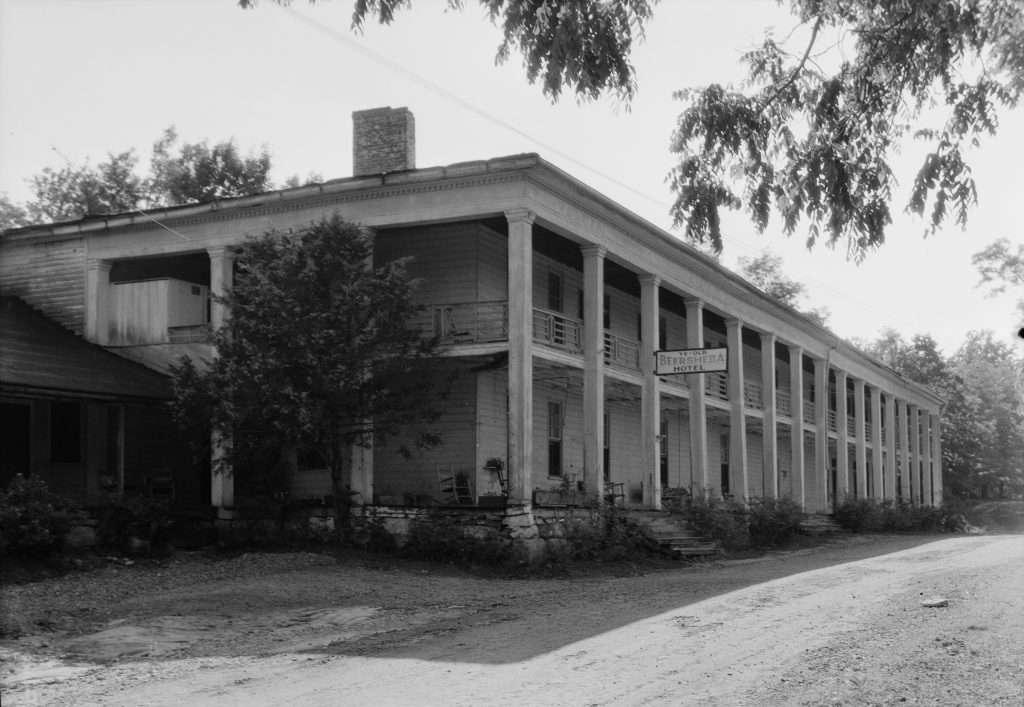 In 1854, Armfield purchased the highland town of Beersheba Springs, in Grundy County, Tennessee, to develop as a resort. He and his wife moved there a year later and Armfield used the venture to develop high-level contacts with members of the business and planter elite who stayed there. He built houses for two Episcopal bishops, the future Confederate general Leonidas Polk and James Hervey Otey, the latter of whom in March 1857 offered Armfield a seat on the board of trustees of the new University of the South. Armfield used that position, along with a donation of $25,000 per year (probably over two years) for the construction and maintenance of buildings, to influence the selection of the university’s location near Beersheba Springs. Now popularly known as Sewanee, the University of the South was founded on July 4, 1857, in part as a refuge from northern and, in particular, antislavery influences.

During the Civil War, Armfield paid to equip a company of Confederate volunteers. In 1869, he helped promote Beersheba Springs as the site of a colony of Swiss immigrants. His business, meanwhile, suffered from the effects of the war and his fortune shrank, from $500,000 in 1850 to just $57,670 in available assets twenty years later.

Armfield died at his home in Beersheba Springs on September 20, 1871. He was buried in a nearby private cemetery.