Skip to content
Author: Third Revolutionary ConventionTranscription Source: William Waller Hening, ed., The Statutes at Large; Being a Collection of All the Laws of Virginia from the First Session of the Legislature, in the Year 1619 (Philadelphia: R. & W. & G. Bartow, 1823), 9:71–73.
FULL TEXT 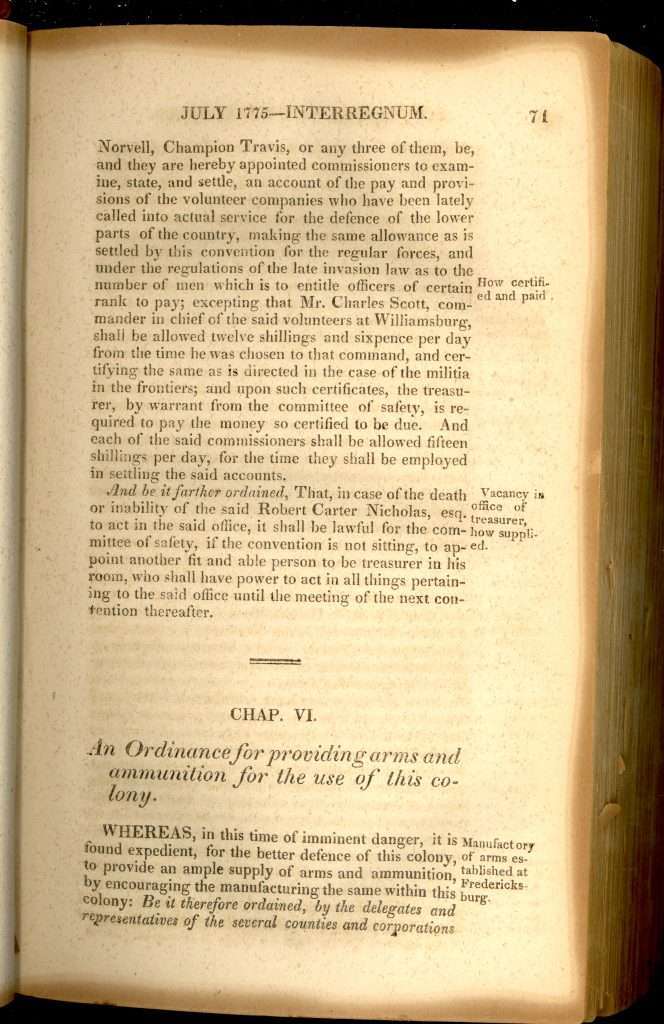 An Ordinance for providing arms and ammunition for the use of this colony.

WHEREAS, in this time of imminent danger, it is found expedient, for the better defence of this colony, to provide an ample supply of arms and ammunition, by encouraging the manufacturing the same within this colony: Be it therefore ordained, by the delegates and representatives of the several counties and corporations 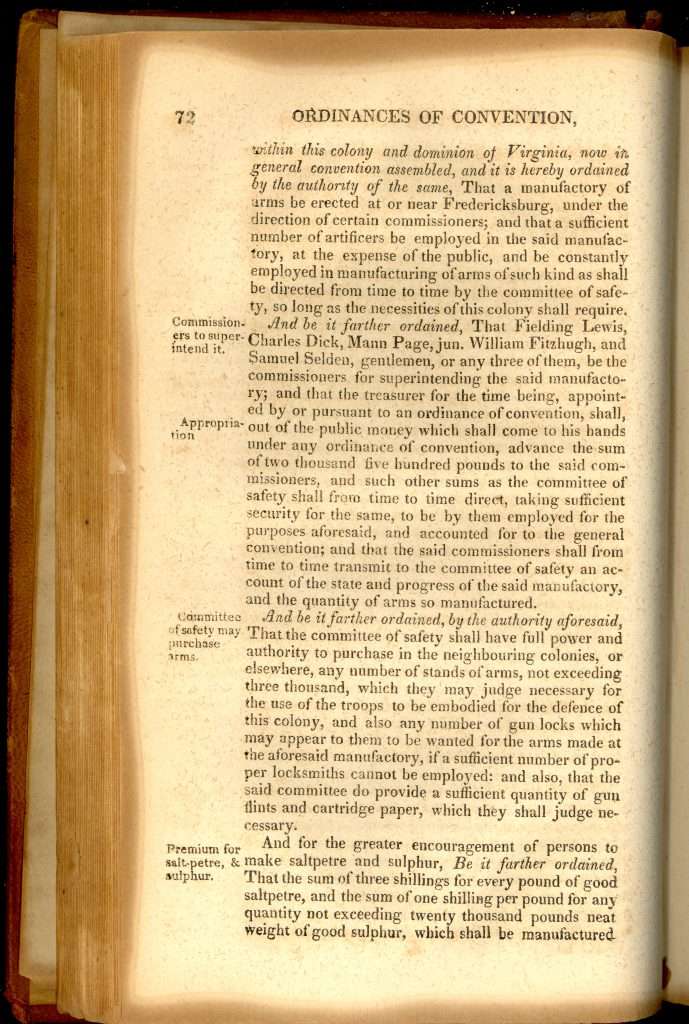 within this colony and dominion of Virginia, now in general convention assembled, and it is hereby ordained by the authority of the same, That a manufactory of [for] arms be erected at or near Fredericksburg, under the direction of certain commissioners; and that a sufficient number of artificers be employed in the said manufactory, at the expense of the public, and be constantly employed in manufacturing of arms of such kind as shall be directed from time to time by the committee of safety, so long as the necessities of this colony shall require.

And be it farther ordained, That Fielding Lewis, Charles Dick, Mann Page, jun.[,] William Fitzhugh, and Samuel Selden, gentlemen, or any three of them, be the commissioners for superintending the said manufactory; and that the treasurer for the time being, appointed by or pursuant to an ordinance of convention, shall, out of the public money which shall come to his hands under any ordinance of convention, advance the sum of two thousand five hundred pounds to the said commissioners, and such other sums as the committee of safety shall from time to time direct, taking sufficient security for the same, to be by them employed for the purposes aforesaid, and accounted for to the general convention; and that the said commissioners shall from time to time transmit to the committee of safety an account of the state and progress of the said manufactory, and the quantity of arms so manufactured.

And be it farther ordained, by the authority aforesaid, That the committee of safety shall have full power and authority to purchase in the neighbouring colonies, or elsewhere, any number of stands of arms, not exceeding three thousand, which they may judge necessary for the use of the troops to be embodied for the defence of this colony, and also any number of gun locks which may appear to them to be wanted for the arms made at the aforesaid manufactory, if a sufficient number of proper locksmiths cannot be employed: and also, that the said committee do provide a sufficient quantity of gun flints and cartridge paper, which they shall judge necessary.

And for the greater encouragement of persons to make saltpetre and sulphur, Be it farther ordained, That the sum of three shillings for every pounds of good saltpetre, and the sum of one shilling per pound for any quantity not exceeding twenty thousand pounds neat weight of good sulphur, which shall be manufactured 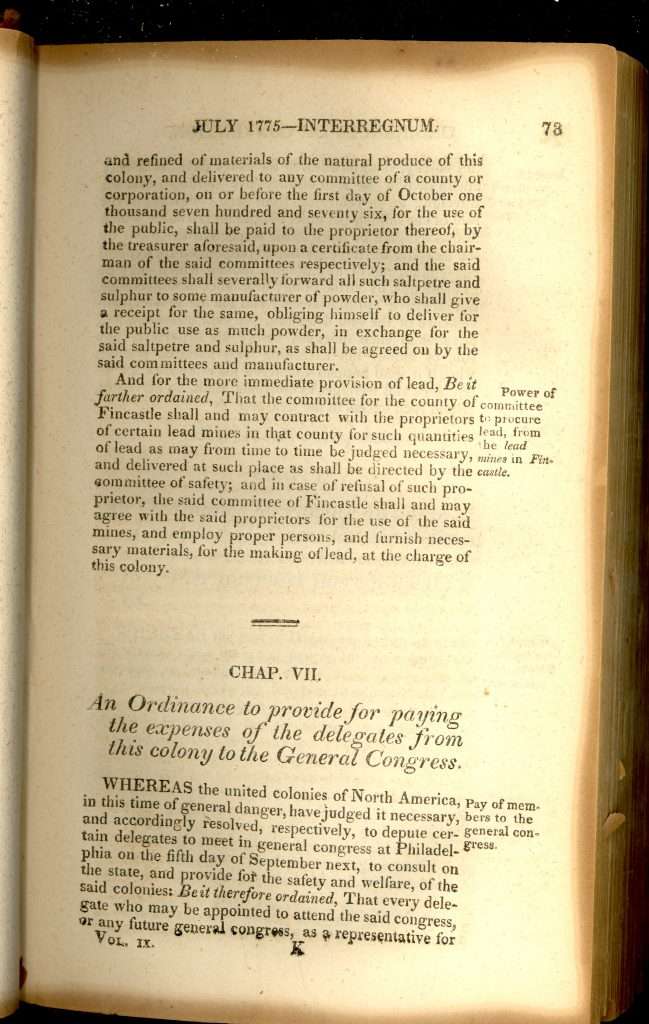 and refined of materials of the natural produce of this colony, and delivered to any committee to any committee of a county or corporation, on or before the first day of October one thousand seven hundred and seventy six, for the use of the public, shall be paid to the proprietor thereof, by the treasurer aforesaid, upon a certificate from the chairman of the said committees respectively; and the said committees shall severally forward all such saltpetre and sulphur to some manufacturer of powder, who shall give a receipt for the same, obliging himself to deliver for the public use as much powder, in exchange for the said saltpetre and sulphur, as shall be agreed on by the said committees and manufacturer.

And for the more immediate provision of lead, Be it farther ordained,That the committee for the county of Fincastle shall and may contract with the proprietors of certain lead mines in that county for such quantities of lead as may from time to time be judged necessary, and delivered at such place as shall be directed by the committee of safety; and in case of refusal of such proprietor, the said committee of Fincastle shall and may agree with the said proprietors for the use of the said mines, and employ proper persons, and furnish necessary materials, for the making of lead, at the charge of this colony.