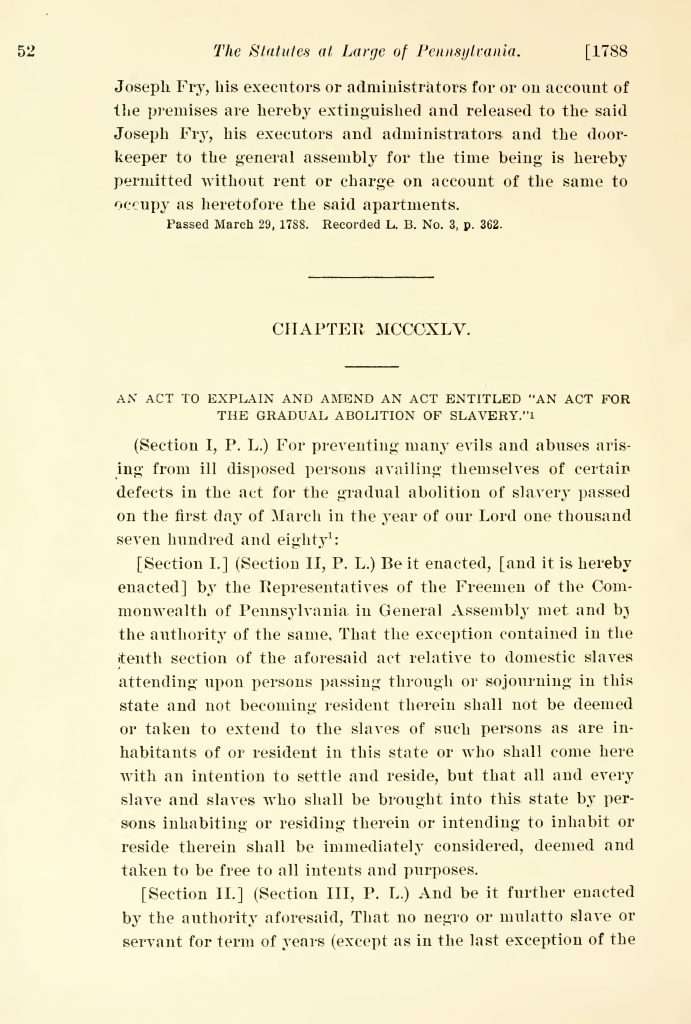 AN ACT TO EXPLAIN AND AMEND AN ACT ENTITLED “AN ACT FOR THE GRADUAL ABOLITION OF SLAVERY.”

(Section I, P. L.) For preventing many evils and abuses arising from ill disposed persons availing themselves of certain defects in the act for the gradual abolition of slavery passed on the first day of March in the year of our Lord one thousand seven hundred and eighty1:

[Section I.] (Section II, P. L.) Be it enacted, [and it is hereby enacted] by the Representatives of the Freemen of the Commonwealth of Pennsylvania in General Assembly met and by the authority of the same. That the exception contained in the tenth section of the aforesaid act relative to domestic slaves attending upon persons passing through or sojourning in this state and not becoming resident therein shall not be deemed or taken to extend to the slaves of such persons as are inhabitants of or resident in this state or who shall come here with an intention to settle and reside, but that all and every slave and slaves who shall be brought into this state by persons inhabiting or residing therein or intending to inhabit or reside therein shall be immediately considered, deemed and taken to be free to all intents and purposes.

[Section II.] (Section III, P. L.) And be it further enacted by the authority aforesaid. That no negro or mulatto slave or servant for term of years (except as in the last exception of the 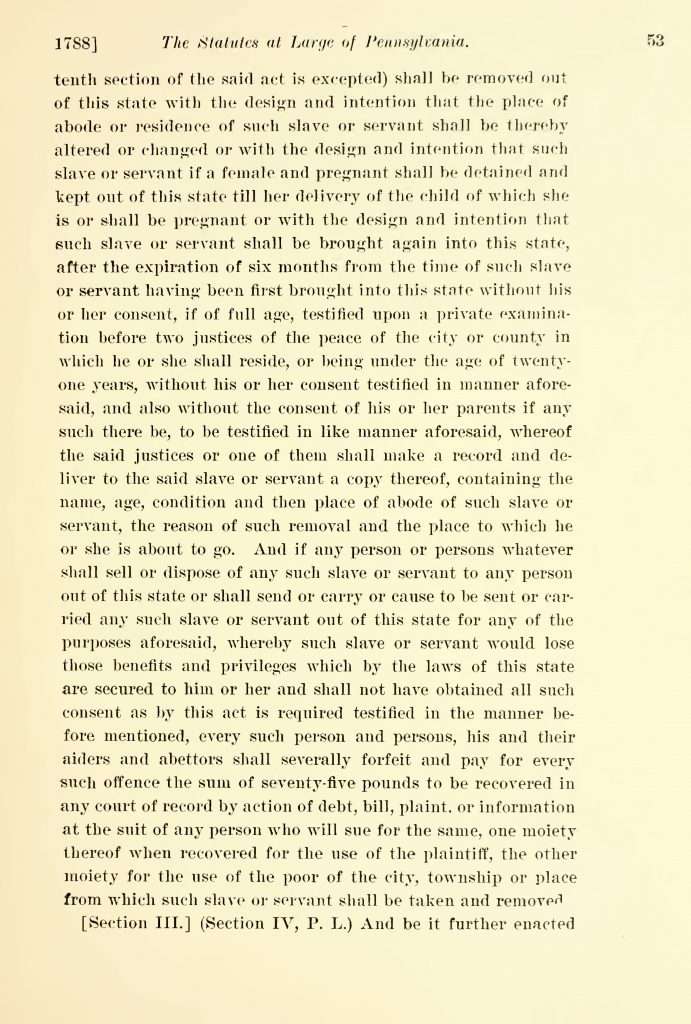 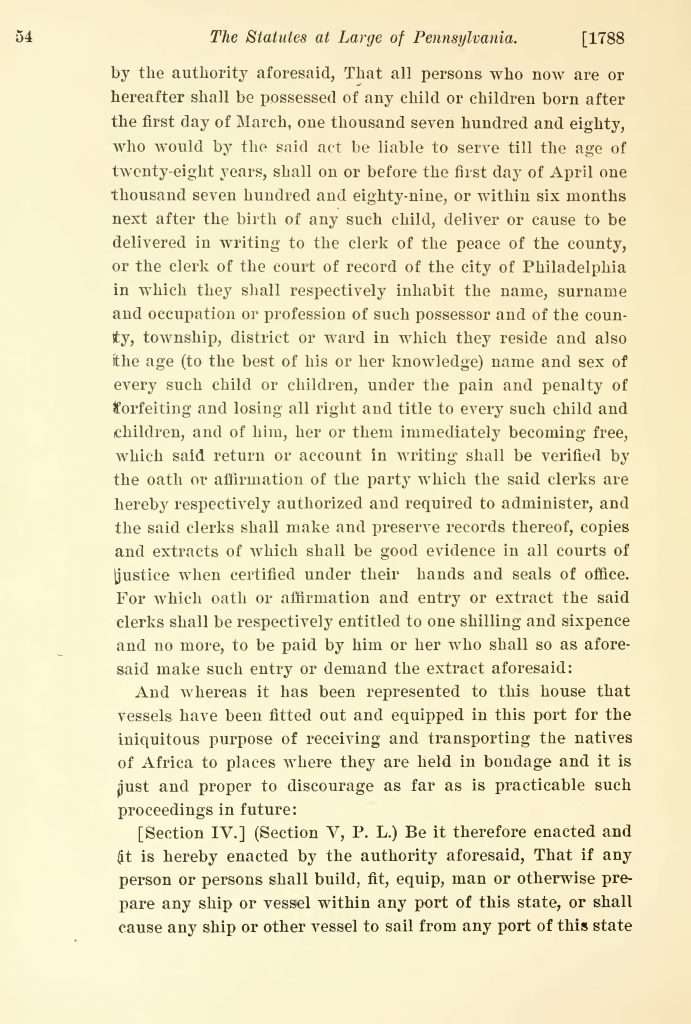 by the authority aforesaid, That all persons who now are or hereafter shall be possessed of any child or children born after the first day of March, one thousand seven hundred and eighty, who would by the said act be liable to serve till the age of twenty-eight years, shall on or before the first day of April one thousand seven hundred and eighty-nine, or within six months next after the birth of any such child, deliver or cause to be delivered in writing to the clerk of the peace of the county, or the clerk of the court of record of the city of Philadelphia in which they shall respectively inhabit the name, surname and occupation or profession of such possessor and of the county, township, district or ward in which they reside and also the age (to the best of his or her knowledge) name and sex of every such child or children, under the pain and penalty of forfeiting and losing all right and title to every such child and children, and of him, her or them immediately becoming free, which said return or account in writing shall be verified by the oath or affirmation of the party which the said clerks are hereby respectively authorized and required to administer, and the said clerks shall make and preserve records thereof, copies and extracts of which shall be good evidence in all courts of justice when certified under their hands and seals of office. For which oath or affirmation and entry or extract the said clerks shall be respectively entitled to one shilling and sixpence and no more, to be paid by him or her who shall so as aforesaid make such entry or demand the extract aforesaid:

And whereas it has been represented to this house that vessels have been fitted out and equipped in this port for the iniquitous purpose of receiving and transporting the natives of Africa to places where they are held in bondage and it is just and proper to discourage as far as is practicable such proceedings in future: 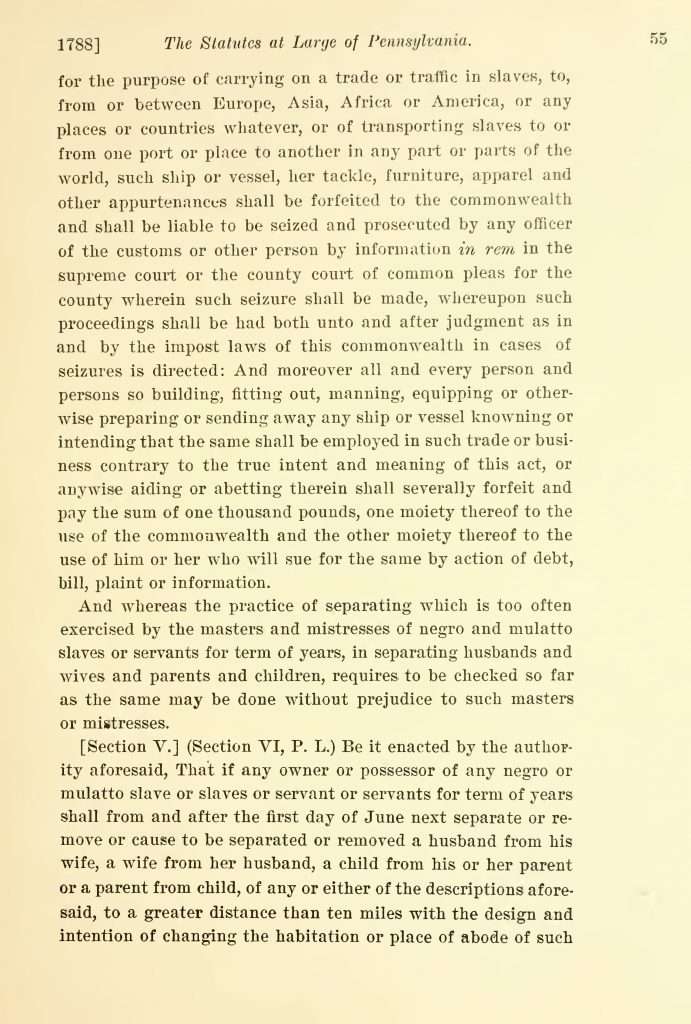 for the purpose of carrying on a trade or traffic in slaves, to, from or between Europe, Asia, Africa or America, or any places or countries whatever, or of transporting slaves to or from one port or place to another in any part or parts of the world, such ship or vessel, her tackle, furniture, apparel and other appurtenances shall be forfeited to the commonwealth and shall be liable to be seized and prosecuted by any officer of the customs or other person by information in rem in the supreme court or the county court of common pleas for the county wherein such seizure shall be made, whereupon such proceedings shall be had both unto and after judgment as in and by the impost laws of this commonwealth in cases of seizures is directed: And moreover all and every person and persons so building, fitting out, manning, equipping or otherwise preparing or sending away any ship or vessel knowning or intending that the same shall be employed in such trade or business contrary to the true intent and meaning of this act, or anywise aiding or abetting therein shall severally forfeit and pay the sum of one thousand pounds, one moiety thereof to the use of the commonwealth and the other moiety thereof to the use of him or her who will sue for the same by action of debt, bill, plaint or information.

And whereas the practice of separating which is too often exercised by the masters and mistresses of negro and mulatto slaves or servants for term of years, in separating husbands and wives and parents and children, requires to be checked so far as the same may be done without prejudice to such masters or mistresses.

[Section V.] (Section VI, P. L.) Be it enacted by the authority aforesaid, That if any owner or possessor of any negro or mulatto slave or slaves or servant or servants for term of years shall from and after the first day of June next separate or remove or cause to be separated or removed a husband from his wife, a wife from her husband, a child from his or her parent or a parent from child, of any or either of the descriptions aforesaid, to a greater distance than ten miles with the design and intention of changing the habitation or place of abode of such 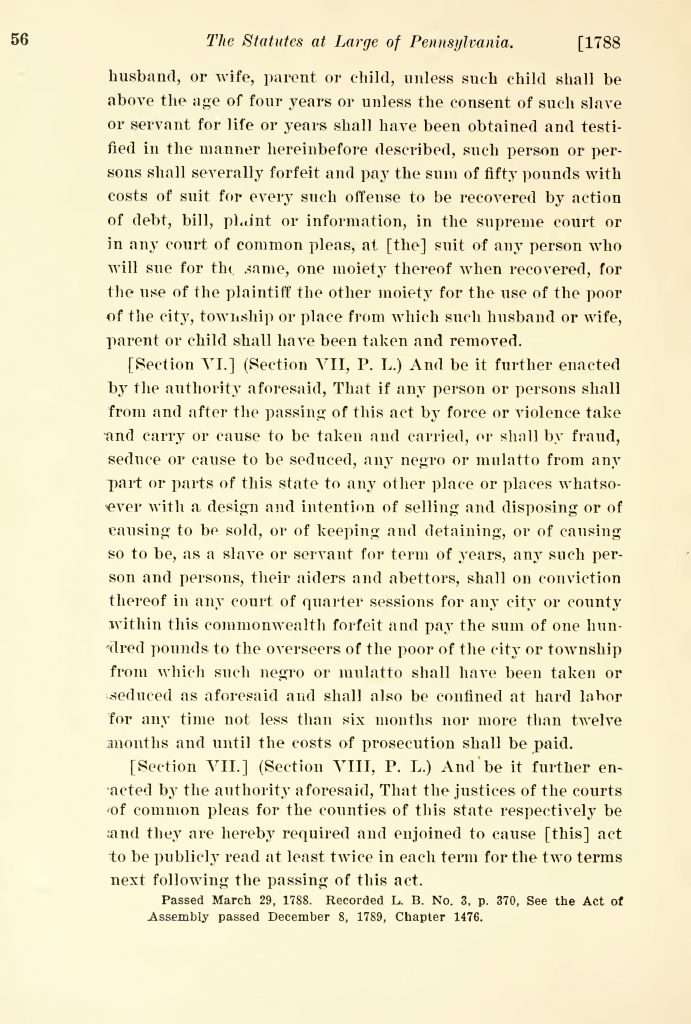 husband, or wife, parent or child, unless such child shall be above the age of four years or unless the consent of such slave or servant for life or years shall have been obtained and testified in the manner hereinbefore described, such person or persons shall severally forfeit and pay the sum of fifty pounds with costs of suit for every such offense to be recovered by action of debt, bill, plaint or information, in the supreme court or in any court of common pleas, at [the] suit of any person who will sue for the same, one moiety thereof when recovered, for the use of the plaintiff the other moiety for the use of the poor of the city, township or place from which such husband or wife, parent or child shall have been taken and removed.

[Section VI.] (Section VII, P. L.) And be it further enacted by the authority aforesaid, That if any person or persons shall from and after the passing of this act by force or violence take and carry or cause to be taken and carried, or shall by fraud, seduce or cause to be seduced, any negro or mulatto from any part or parts of this state to any other place or places whatsoever with a design and intention of selling and disposing or of causing to be sold, or of keeping and detaining, or of causing so to be, as a slave or servant for term of years, any such person and persons, their aiders and abettors, shall on conviction thereof in any court of quarter sessions for any city or county within this commonwealth forfeit and pay the sum of one hundred pounds to the overseers of the poor of the city or township from which such negro or mulatto shall have been taken or seduced as aforesaid and shall also be confined at hard labor for any time not less than six months nor more than twelve months and until the costs of prosecution shall be paid.

[Section VII.] (Section VIII, P. L.) And be it further enacted by the authority aforesaid, That the justices of the courts of common pleas for the counties of this state respectively be and they are hereby required and enjoined to cause [this] act to be publicly read at least twice in each term for the two terms next following the passing of this act.