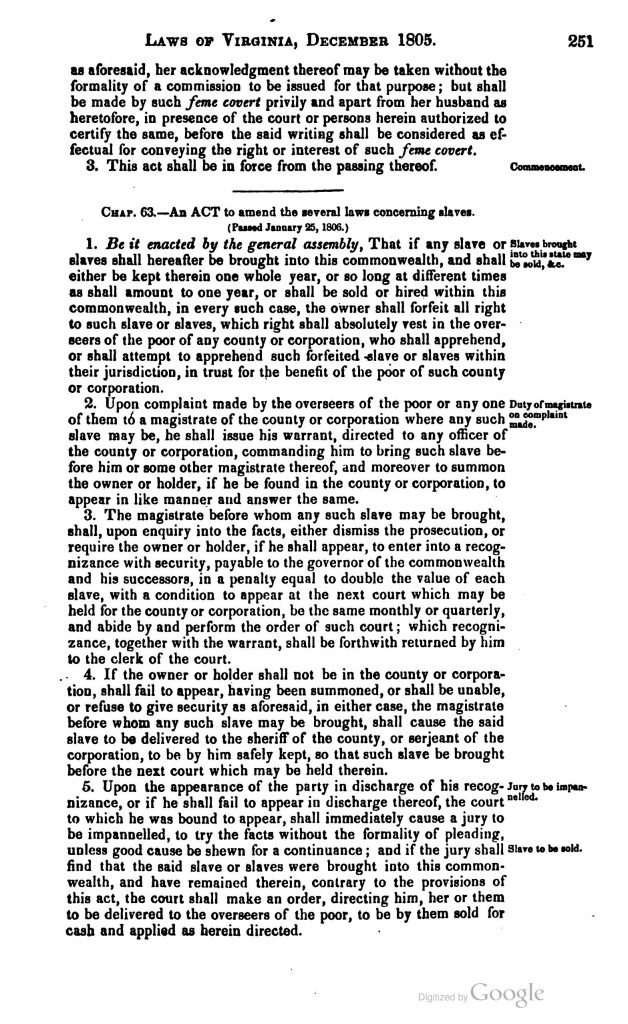 1. Be it enacted by the general assembly, That if any slave or slaves shall hereafter be brought into this commonwealth, and shall either be kept therein one whole year, or so long at different times as shall amount to one year, or shall be sold or hired within this commonwealth, in every such case, the owner shall forfeit all right to such slave or slaves, which right shall absolutely vest in the overseers of the poor of any county or corporation, who shall apprehend, or shall attempt to apprehend such forfeited slave or slaves within their jurisdiction, in trust for the benefit of the poor of such county or corporation.

3. The magistrate before whom any such slave may be brought, shall, upon enquiry into the facts, either dismiss the prosecution, or require the owner or holder, if he shall appear, to enter into a recognizance with security, payable to the governor of the commonwealth and his successors, in a penalty equal to double the value of each slave, with a condition to appear at the next court which may be held for the county or corporation, be the same monthly or quarterly, and abide by and perform the order of such court; which recognizance, together with the warrant, shall be forthwith returned by him to the clerk of the court.

4. If the owner or holder shall not be in the county or corporation, shall fail to appear, having been summoned, or shall be unable or refuse to give security as aforesaid, in either case, the magistrate before whom any such slave may be brought, shall cause the said slave to be delivered to the sheriff of the county, or serjeant of the corporation, to be by him safely kept, so that such slave be brought before the next court which may be held therein.

5. Upon the appearance of the party in discharge of his recognizance, or if he shall fail to appear in discharge thereof, the court to which he was bound to appear, shall immediately cause a jury to be impannelled, to try the facts without the formality of pleading, unless good cause be shewn for a continuance; and if the jury shall find that the said salve or slaves were brought into this commonwealth, and have remained therein, contrary to the provisions of this act, the court shall make an order, directing him, her or them to be delivered to the overseers of the poor, to be by them sold for cash and applied as herein directed. 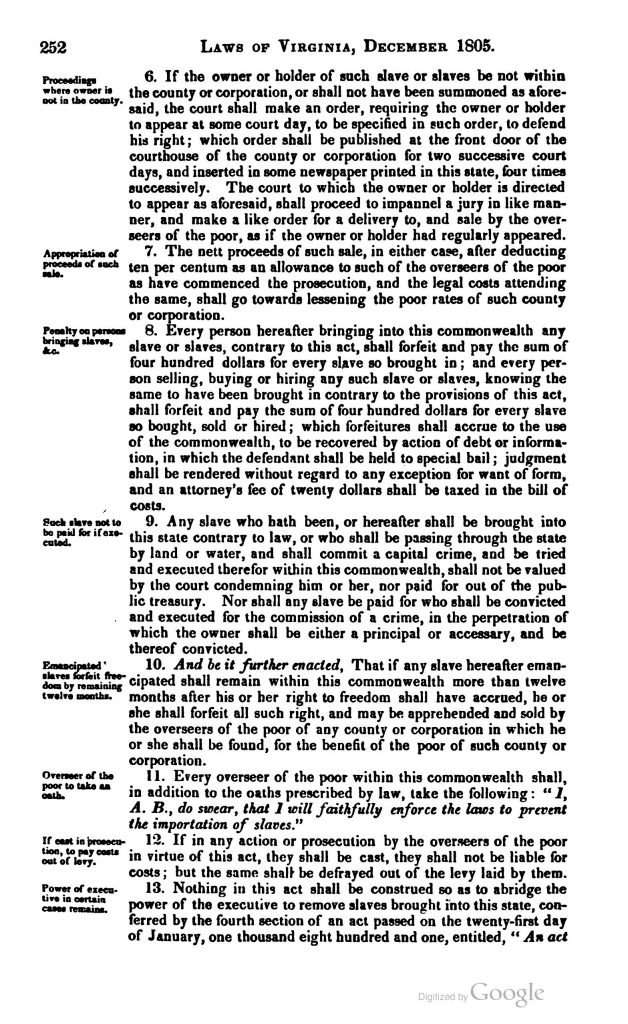 7. The nett proceeds of such sale, in either case, after deducting ten per centum as an allowance to such of the overseers of the poor as have commenced the prosecution, and the legal costs attending the same, shall go towards lessening the poor rates of such county or corporation.

9. Any slave who hath been, or hereafter shall be brought into this state contrary to law, or who shall be passing through the state by land or water, and shall commit a capital crime, and be tried and executed therefor within this commonwealth, shall not be valued by the court condemning him or her, nor paid for out of the public treasury. Nor shall any slave be paid for who shall be convicted and executed for the commission of a crime, in the perpetration of which the owner shall be either a principal or accessary, and be thereof convicted.

10. And be it further enacted, That if any slave hereafter emancipated shall remain within this commonwealth more than twelve months after his or her right to freedom shall have accrued, he or she shall forfeit all such right, and may be apprehended and sold by the overseers of the poor of any county or corporation in which he or she shall be found, for the benefit of the poor of such county or corporation.

11. Every overseer of the poor within this commonwealth shall, in addition to the oaths prescribed by law, take the following: “I, A. B. do swear, that I will faithfully enforce the laws to prevent the importation of slaves.”

12. If in any action or prosecution by the overseers of the poor in virtue of this act, they shall be cast, they shall not be liable for the costs; but the same shall be defrayed out of the levy laid by them.

13. Nothing in this act shall be construed so as to abridge the power fo the executive to remove slaves brought into this state, conferred by the fourth section of an act passed on the twenty-first day of January, one thousand eight hundred and one, entitled, “An act 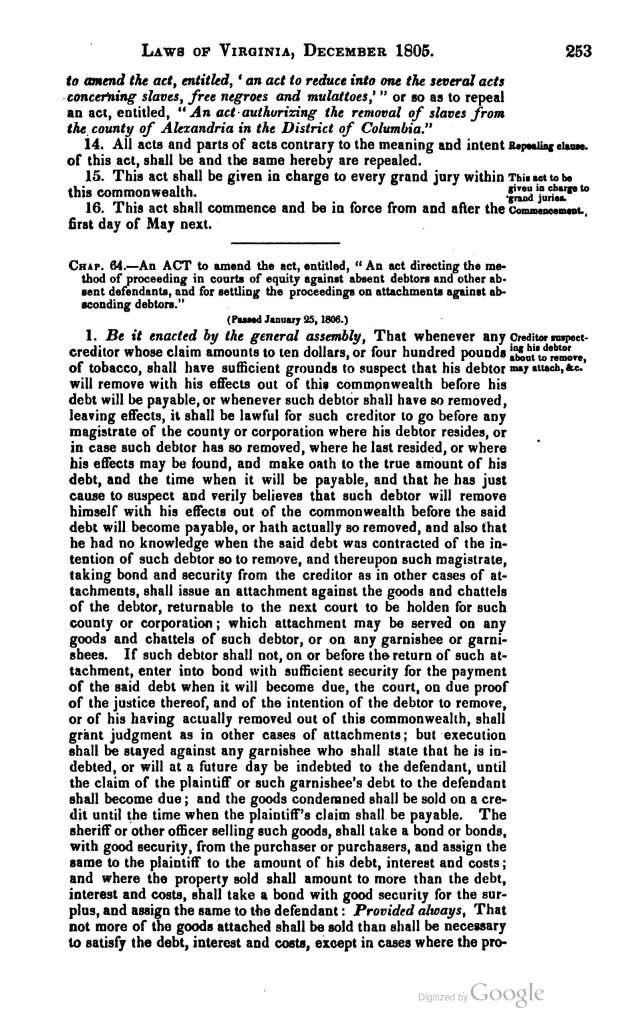 to amend the act, entitled, ‘an act to reduce into one the several acts concerning slaves, free negroes and mulattoes,'” or so as to repeal an act, entitled, “An act authorizing the removal of slaves from the county of Alexandria in the District of Columbia.”

14. All acts and parts of acts contrary to the meaning and intent of this act, shall be and the same hereby are repealed.

15. This act shall be given in charge to every grand jury within this commonwealth.

16. This act shall commence and be in force from and after the first day of May next.

RELATED CONTENT
Categories:
Type:
MAP
TIMELINE
January 25, 1806
The General Assembly passes "An ACT to amend the several laws concerning slaves," legislation that prohibits the importation of slaves to Virginia and forces all emancipated slaves to leave the state within twelve months.
CITE THIS ENTRY