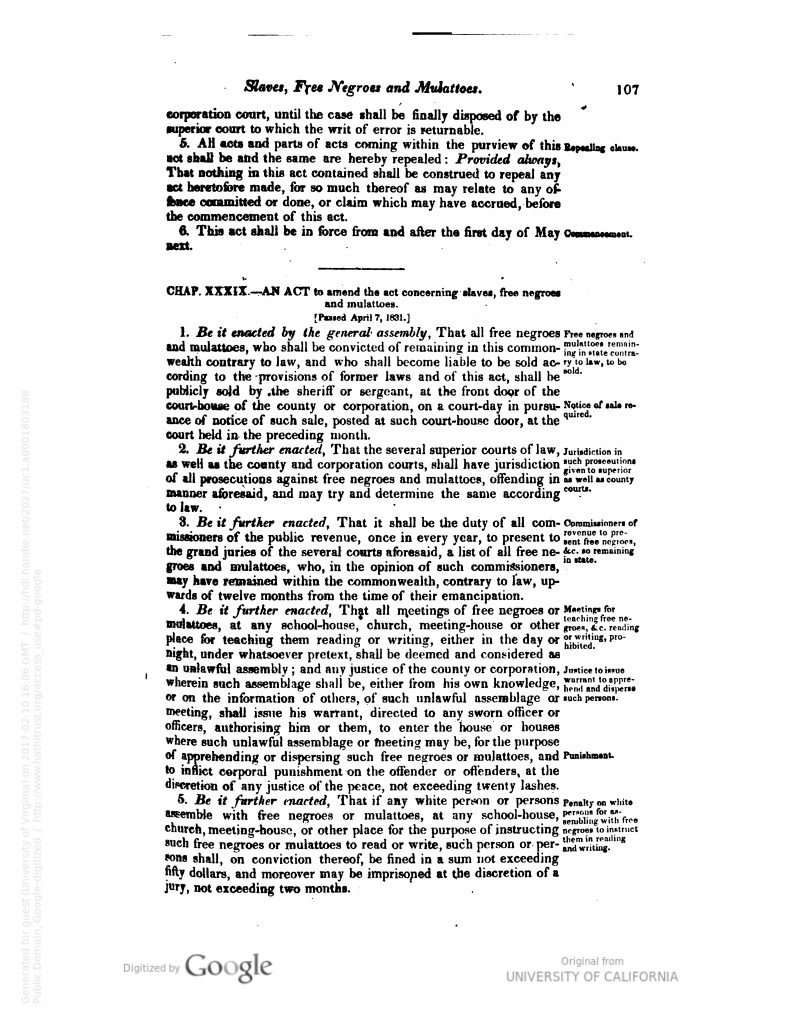 Acts passed at a General Assembly of the Commonwealth of Virginia (1831), Page 107

1. Be it enacted by the general assembly, That all free negroes and mulattoes, who shall be convicted of remaining in this commonwealth contrary to law, and who shall become liable to be sold according to the provisions of former laws and of this act, shall be publicly sold off by the sheriff or sergeant, at the front door of the court-house of the county or corporation, on a court-day in pursuance of notice of such sale, posted at such court-house door, at the court held in the preceding month.

2. Be it further enacted, That the several superior courts of law, as well as the county and corporation courts, shall have jurisdiction of all prosecutions against free negroes and mulattoes, offending in manner aforesaid, and may try and determine the same according to law.

3. Be it further enacted, That it shall be the duty of all commissioners of the public revenue, once in every year, to present to the grand juries of the several courts aforesaid, a list of all free negroes and mulattoes, who, in the opinion of such commissioners, may have remained within the commonwealth, contrary to law, upwards of twelve months from the time of their emancipation.

4. Be it further enacted, That all meetings of free negroes or mulattoes, at any school-house, church, meeting-house or other place for teaching them reading or writing, either in the day or night, under whatsoever pretext, shall be deemed and considered as an unlawful assembly; and any justice of the county or corporation, wherein such assemblage shall be, either from his own knowledge, or on the information of others, of such unlawful assemblage or meeting, shall issue his warrant, directed to any sworn officer or officers, authorising him or them, to enter the house or houses where such unlawful assemblage or meeting may be, for the purpose of apprehending or dispersing such free negroes or mulattoes, and to inflict corporal punishment on the offender or offenders, at the discretion of any justice of the peace, not exceeding twenty lashes.

5. Be it further enacted, That if any white person or persons assemble with free negroes or mulattoes, at any school-house, church, meeting-house, or other place for the purpose of instructing such free negroes or mulattoes to read or write, such person or persons shall, on conviction thereof, be fined in a sum not exceeding fifty dollars, and moreover may be imprisoned at the discretion of a jury, not exceeding two months. 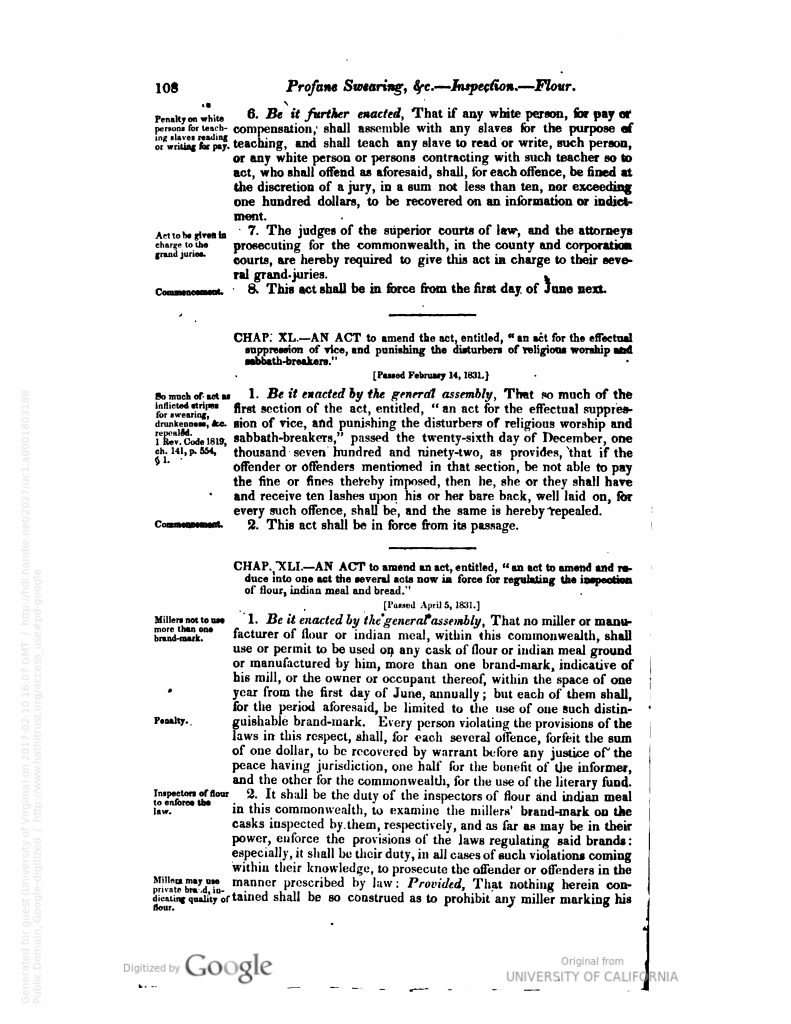 Acts passed at a General Assembly of the Commonwealth of Virginia (1831), Page 108

6. Be it further enacted, That if any white person, for pay or compensation, shall assemble with any slaves for the purpose of teaching, and shall teach any slave to read or write, such person, or any white person or persons contracting with such teacher so to act, who shall offend as aforesaid, shall, for each offence, be fined at the discretion of a jury, in a sum not less than ten, nor exceeding one hundred dollars, to be recovered on an information or indictment.

7. The judges of the superior courts of law, and the attorneys prosecuting for the commonwealth, in the county and corporation courts, are herby required to give this act in charge to their several grand juries.

8. This act shall be in force from the first day of June next.