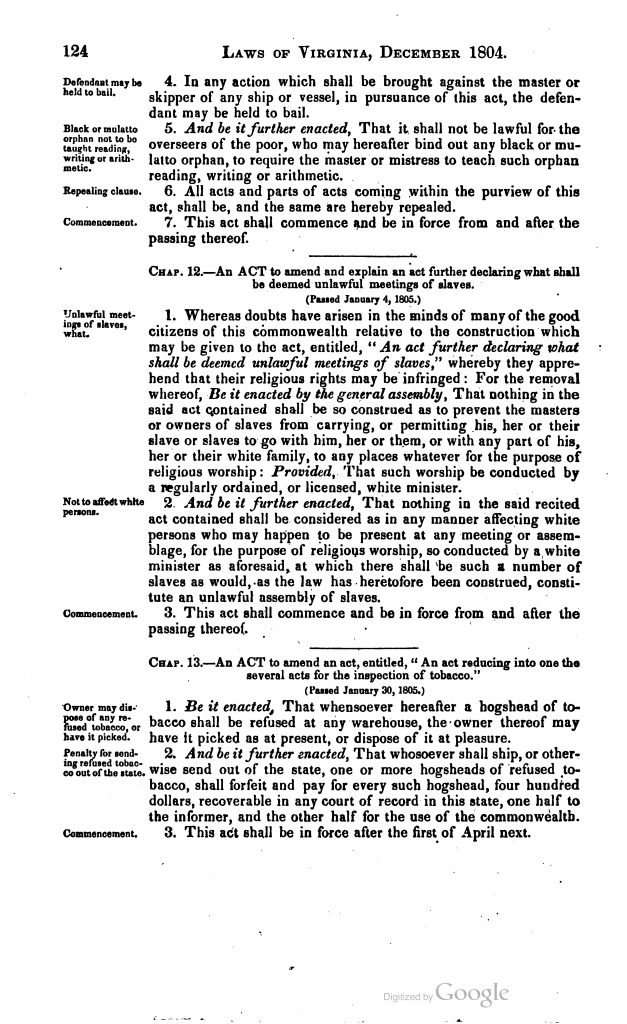 Chap. 12.—An ACT to amend and explain an act further declaring what shall be deemed unlawful meetings of slaves

1. Whereas doubts have arisen in the minds of many of the good citizens of this commonwealth relative to the construction which may be given to the act, entitled, "An act further declaring what shall be deemed unlawful meetings of slaves," whereby they apprehend that their religious rights may be infringed: For the removal whereof, Be it enacted by the general assembly, That nothing in the said act contained shall be so construed as to prevent the masters or owners of slaves from carrying, or permitting his, her of their slave or slaves to go with him, her or them or with any part of his, her or their white family, to any places whatever for the purpose of religious worship: Provided, That such worship be conducted by a regularly ordained, or licensed, white minister.

2. And be it further enacted, That nothing in the said recited act contained shall be considered as in any manner affecting white persons who may happen to be present at any meeting or assemblage, for the purpose of religious worship, so conducted by a white minister as aforesaid, at which there shall be such a number of slaves as would, as the law has heretofore been construed, constitute an unlawful assembly of slaves.

3. This act shall commence and be in force from and after the passing thereof.