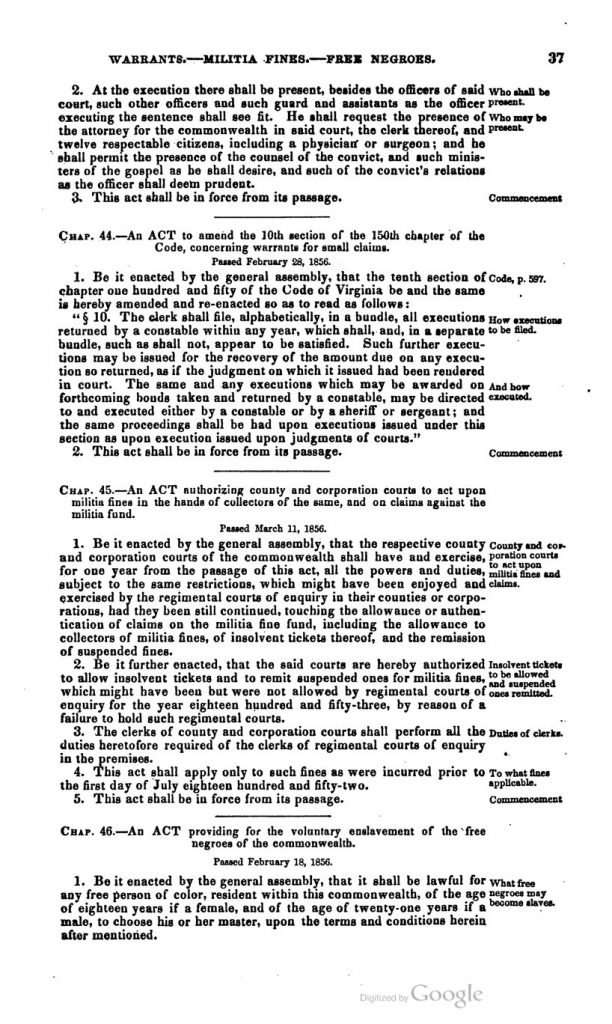 Chap. 46.—An ACT providing for the voluntary enslavement of the free negroes of the commonwealth

1. Be it enacted by the general assembly, that it shall be lawful for any free person of color, resident within this commonwealth of the age of eighteen years if a female, and of the age of twenty-one years if a male, to choose his or her master, upon the terms and conditions herein after mentioned. 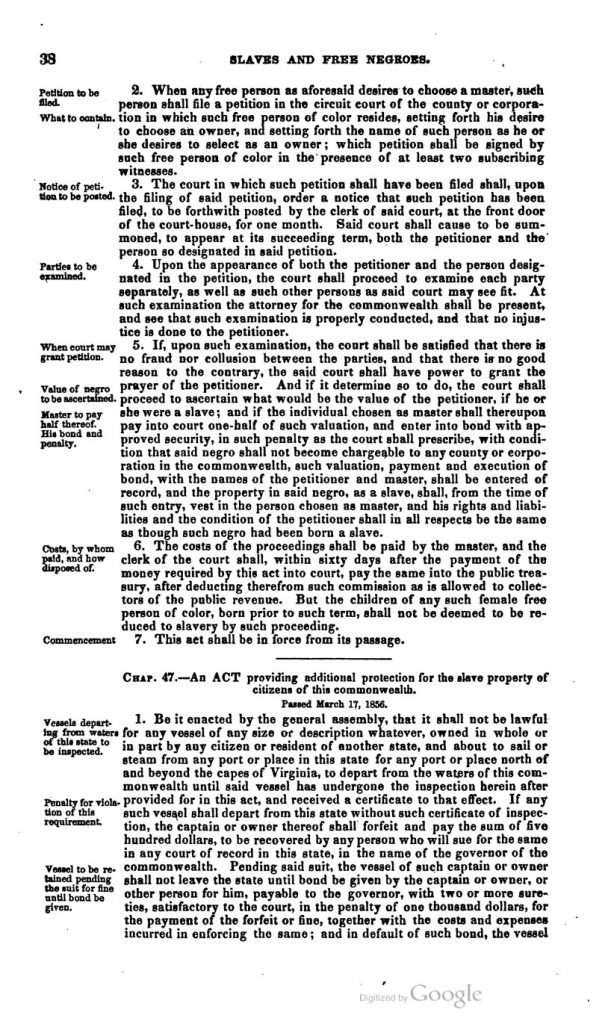 2. When any free person as aforesaid desires to choose a master, such person shall file a petition in the circuit court of the county or corporation in which such free person of color resides, setting forth his desire to choose an owner, and setting forth the name of such person as he or she desires to select as an owner; which petition shall be signed by such free person of color in the presence of at least two subscribing witnesses.

3. The court in which such petition shall have been filed shall, upon the filing of said petition, order a notice that such petition has been filed, to be forthwith posted by the clerk of said court, at the front door of the court-house, for one month. Said court shall cause to be summoned, to appear at its succeeding term, both the petitioner and the person so designated in said petition.

4. Upon the appearance of both the petitioner and the person designated in the petition, the court shall proceed to examine each party separately, as well as such other persons as said court may see fit. At such examination the attorney for the commonwealth shall be present, and see that such examination is properly conducted, and that no injustice is done to the petitioner.

5. If, upon such examination, the court shall be satisfied that there is no fraud nor collusion between the parties, and that there is no good reason to the contrary, the said court shall have power to grant the prayer of the petitioner. And if it determine so to do, the court shall proceed to ascertain what would be the value of the petitioner, if he or she were a slave; and if the individual chosen as master shall thereupon pay into court one-half of such valuation, and enter into bond with approved security, in such penalty as the court shall prescribe, with condition that said negro shall not become chargeable to any county or corporation in the commonwealth, such valuation, payment and execution of bond, with the names of the petitioner and master, shall be entered of record, and the property in said negro, as a slave, shall, from the time of such entry, vest in the person chosen as master, and his rights and liabilities and the condition of the petitioner shall in all respects be the same as though such negro had been born a slave.

6. The costs of the proceedings shall be paid by the master, and the clerk of the court shall, within sixty days after the payment of the money required by this act into court, pay the same into the public treasury, after deducting therefrom such commission as is allowed to collectors of the public revenue. But the children of any such female free person of color, born prior to such term, shall not be deemed to be reduced to slavery by such proceeding.

7. This act shall be in force from its passage.