Skip to content
Author: General AssemblyTranscription Source: William Waller Hening, ed., The Statutes at Large; Being a Collection of All the Laws of Virginia from the First Session of the Legislature in the Year 1619 (New York: R. & W. & G. Bartow, 1823), 2:388.
FULL TEXT 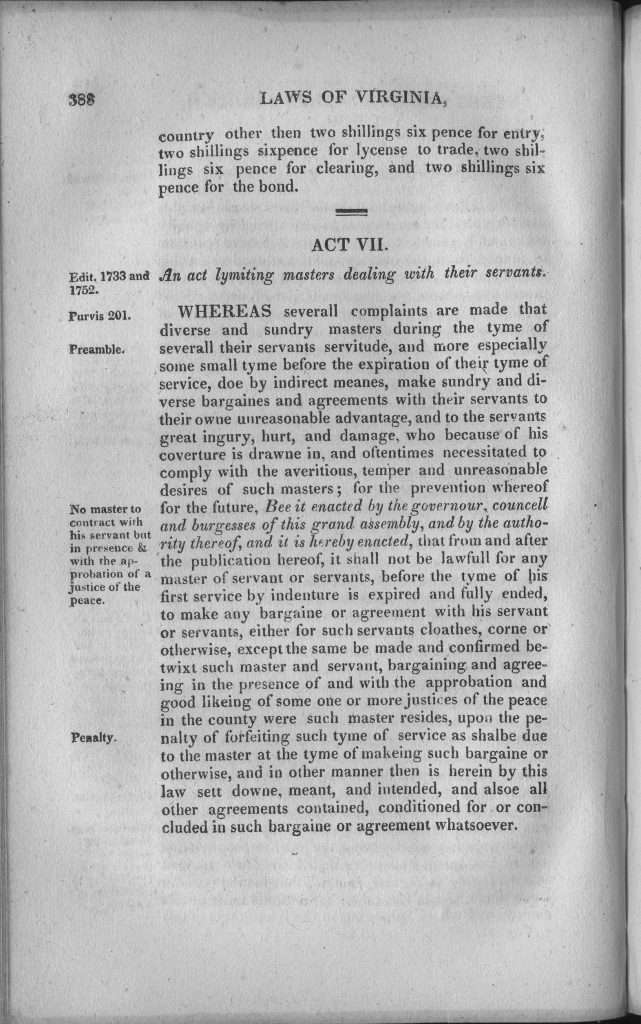 WHEREAS severall complaints are made that diverse and sundry masters during the tyme of severall their servants servitude, and more especially some small tyme before the expiration of their tyme of service, doe by indirect meanes, make sundry and diverse bargaines and agreements with their servants to their owne unreasonable advantage, and to the servants great ingury, hurt, and damage, who because of his coverture is drawne in, and oftentimes necessitated to comply with the averitious, temper and unreasonable desires of such masters; for the prevention whereof for the future, Bee it enacted by the governour, councell and burgesses of this grand assembly, and by the authority thereof, and it is hereby enacted, that from and after the publication hereof, it shall not be lawfull for any master of servant or servants, before the tyme of his first service by indenture is expired and fully ended, to make any bargaine or agreement with his servant or servants, either for such servants cloathes, corne or otherwise, except the same be made and confirmed betwixt such master and servant, bargaining and agreeing in the presence of and with the approbation and good likeing of some one or more justices of the peace in the county were such master resides, upon the penalty of forfeiting such tyme of service as shalbe due to the master at the tyme of makeing such bargaine or otherwise, and in other manner then is herein by this law sett downe, meant, and intended, and alsoe all other agreements contained, conditioned for or concluded in such bargaine or agreement whatsoever.

“An Acte towching dyvers Orders for Artificers Laborers Servantes of Husbandrye and Apprentises” (1563) Laws Concerning Indentured Servants (1619) Law Regulating Indentured Servants (1642–1643) Law Regulating Marriage of Indentured Servants (1642–1643) Law Prohibiting Indentured Servants from Hiring Themselves Out (1642–1643) Irish Servants (1654) “Concerning Hireing of Servants” (1657–1658) “Concerning secret Marriages” (1657–1658) “How long Servants without Indentures shall Serve” (1657–1658) “An Act for repealing an Act for Irish Servants” (1659) “Women servants gott with child by their masters after their time expired to be sold by the Churchwardens for two yeares for the good of the parish” (1662) “Man Servants getting any bastard child to make satisfaction to the parish after their service ended” (1662) “Women servants whose common imployment is working in the ground to be accompted tythable” (1662) “An act for the more effectuall suppressing the severall sins and offences of swaring, cursing, profaineing Gods holy name, Sabbath abuseing, drunkenness, ffornication, and adultery” (1691) “An act for punishment of ffornication and seaverall other sins and offences” (1696)