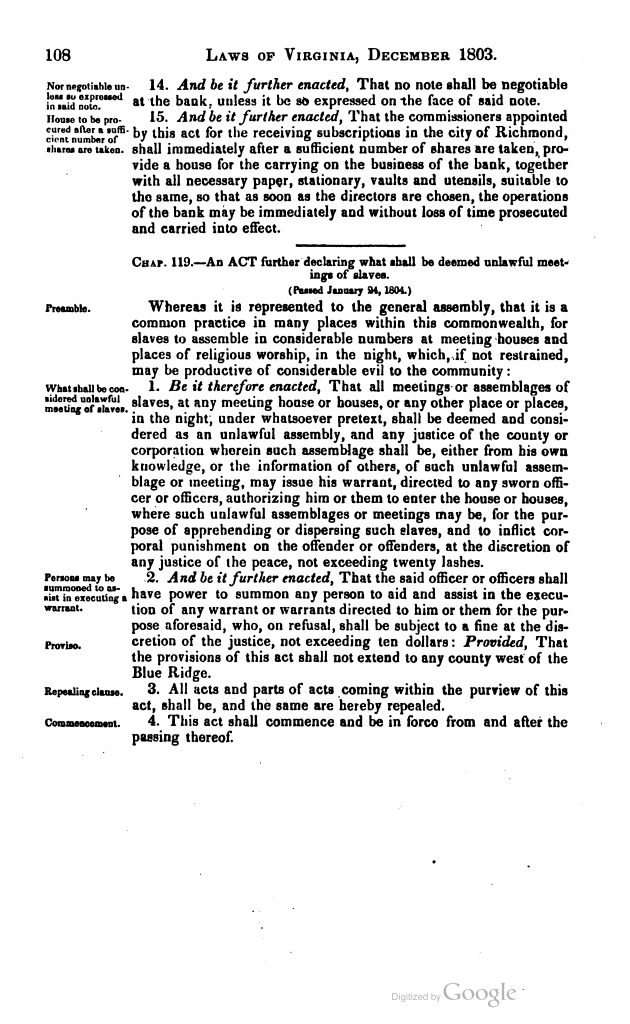 Chap. 119.—An ACT further declaring what shall be deemed unlawful meetings of slaves.

Whereas it is represented to the general assembly, that it is a common practice in many places within this commonwealth, for slaves to assemble in considerable numbers at meeting houses and places of religious worship, in the night, which, if not restrained, may be productive of considerable evil to the community:

1. Be it therefore enacted, That all meetings or assemblages of slaves, at any meeting house or houses, or any other place or places, in the night, under whatsoever pretext, shall be deemed and considered as an unlawful assembly, and any justice of the county or corporation wherein such assemblage shall be, either from his own knowledge, or the information of others, of such unlawful assemblage or meeting, may issue his warrant, directed to any sworn officer or officers, authorizing him or them to enter the house or houses, where such unlawful assemblages or meetings may be, for the purpose of apprehending or dispersing such slaves, and to inflict corporal punishment on the offender or offenders, at the discretion of any justice of the peace, not exceeding twenty lashes.

2. And be it further enacted, That the said officer or officers shall have power to summon any person to aid and assist in the execution of any warrant or warrants directed to him or them for the purpose aforesaid, who, on refusal, shall be subject to a fine at the discretion of the justice, not exceeding ten dollars: Provided, That the provisions of this act shall not extend to any county west of the Blue Ridge.

3. All acts and parts of acts coming within the purview of this act, shall be, and the same are hereby repealed.

4. This act shall commence and be in force from and after the passing thereof.