Skip to content
Author: General Assembly Transcription Source: Acts of the General Assembly of the State of Virginia, Passed in 1861, in the Eighty-fifth Year of the Commonwealth (Richmond, Virginia: William F. Ritchie, 1861), 52–53.
FULL TEXT 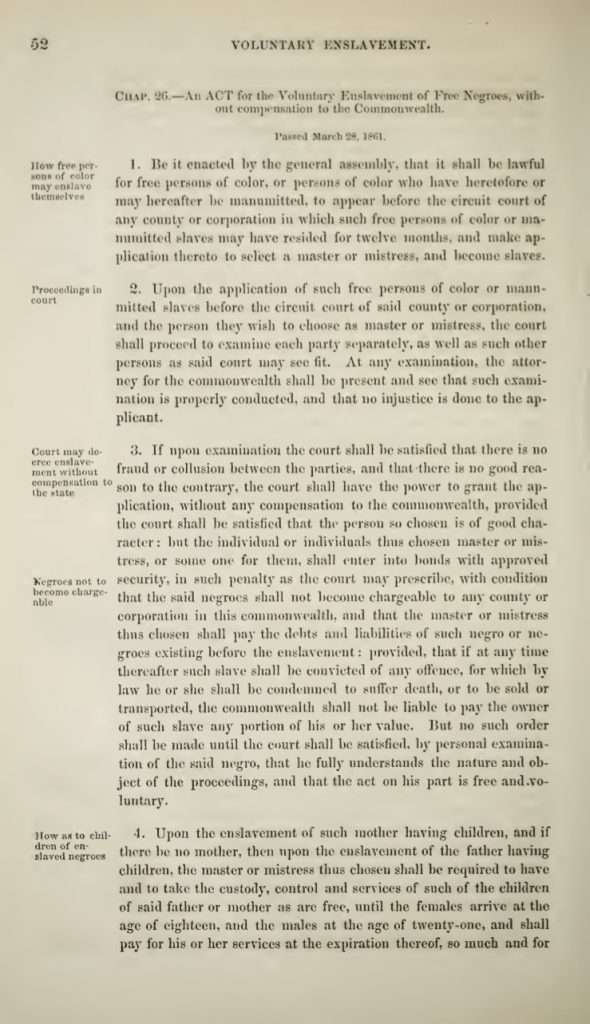 Chap. 26.—An ACT for the Voluntary Enslavement of Free Negroes, without compensation to the Commonwealth.

2. Upon the application of such free persons of color or manumitted slaves before the circuit court of said county or corporation, and the person they wish to choose as master or mistress, the court shall proceed to examine each party separately, as well as such other persons as said court may see fit. At any examination, the attorney for the commonwealth shall be present and see that such examination is properly conducted, and that no injustice is done to the applicant.

3. If upon examination the court shall be satisfied that there is no fraud or collusion between the parties, and that there is no good reason to the contrary, the court shall have the power to grant the application, without any compensation to the commonwealth, provided the court shall be satisfied that the person so chosen is of good character: but the individual or individuals thus chosen master or mistress, or some one for them, shall enter into bonds with approved security, in such penalty as the court may prescribe, with condition that the said negroes shall not become chargeable to any county or corporation in this commonwealth, and that the master or mistress thus chosen shall pay the debts and liabilities of such negro or negroes existing before the enslavement: provided, that if at any time thereafter such slave shall be convicted of any offence, for which by law he or she shall be condemned to suffer death, or to be sold or transported, the commonwealth shall not be liable to pay the owner of such slave any portion of his or her value. But no such order shall be made until the court shall be satisfied, by personal examination of the said negro, that he fully understands the nature and object of the proceedings, and that the act on his part is free and voluntary.

4. Upon the enslavement of such mother having children, and if there be no mother, then upon the enslavement of the father having children, the master or mistress thus chosen shall be required to have and to take the custody, control and services of such of the children of said father or mother as are free, until the females arrive at the age of eighteen, and the males at the age of twenty-one, and shall pay for his or her services at the expiration thereof, so much and for 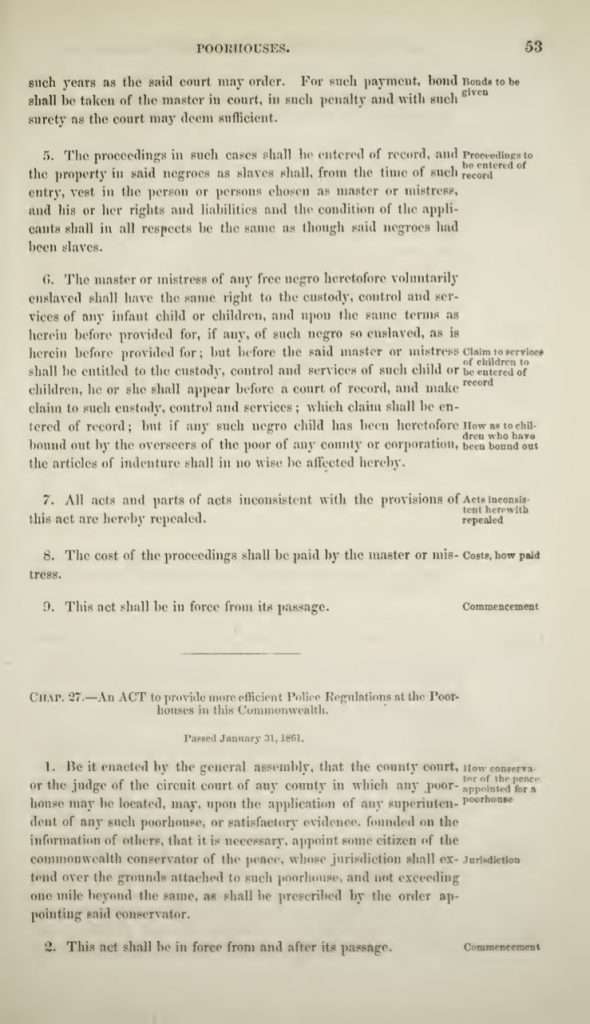 such years as the said court may order. For such payment, bond shall be taken of the master in court, in such penalty and with such surety as the court may deem sufficient.

5. The proceedings in such cases shall be entered of record, and the property in said negroes as slaves shall, from the time of such entry, vest in the person or persons chosen as master or mistress, and his or her rights and liabilities and the condition of the applicants shall in all respects be the same as though said negroes had been slaves.

6. The master or mistress of any free negro heretofore voluntarily enslaved shall have the same right to the custody, control and services of any infant child or children, and upon the same terms as herein before provided for, if any, of such negro so enslaved, as is herein provided for; but before the said master or mistress shall be entitled to the custody, control and services of such child or children, he or she shall appear before a court of record, and make claim to such custody, control and services; which claim shall be entered of record; but if any such negro child has been heretofore bound out by the overseers of the poor of any county or corporation, the articles of indenture shall in no wise be affected hereby.

7. All acts and part of acts inconsistent with the provisions of this act are hereby repealed.

8. The cost of the proceedings shall be paid by the master or mistress.

9. This act shall be in force from its passage.