Skip to content
Author: General AssemblyTranscription Source: William Waller Hening, ed.,The Statutes at Large; Being a Collection of all the Laws of Virginia from the First Session of the Legislature, in the Year 1619 (New York: R. & W. & G. Bartow, 1823), 2:381–386.
FULL TEXT 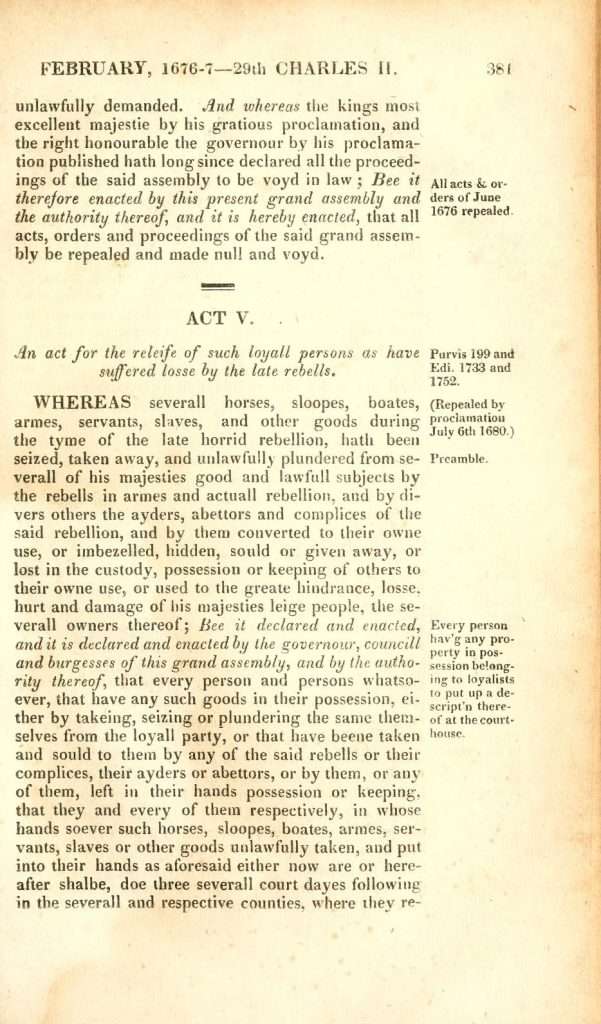 WHEREAS severall horses, sloopes, boates, armes, servants, slaves, and other goods during the tyme of the late horrid rebellion, hath been seized, taken away, and unlawfully plundered from severall of his majesties good and lawfull subjects by the rebels in armes and actuall rebellion, and by divers others the ayders, abettors and complices of the said rebellion, and by them converted to their owne use, or imbezelled, hidden, sould or given away, or lost in the custody, possession or keeping of others to their owne use, or used to the great hindrance, losse, hurt and damage of his majesties leige people, the severall owners thereof; Bee it declared and enacted, and it is declared and enacted by the governour, councill and burgesses of this grand assembly, and by the authority thereof, that every person and persons whatsoever, that have any such goods in their possession, either by takeing, seizing or plundering the same themselves from the loyall party, or that have beene taken and sould to them by any of the said rebells or their complices, their ayders or abettors, or by them, or any of them, left in their hands possession or keeping, that they and every of them respectively, in whose hands soever such horses, sloopes, boates, armes, servants, slaves or other goods unlawfully taken, and put into their hands as aforesaid either now are or hereafter shalbe, doe three severall court dayes following in the severall and respective counties, where they re- 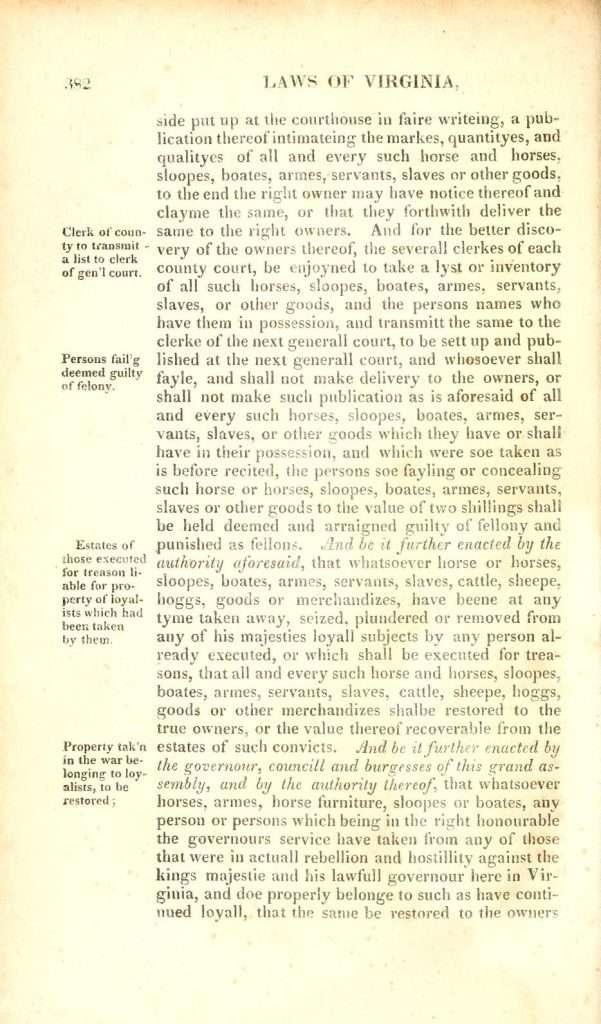 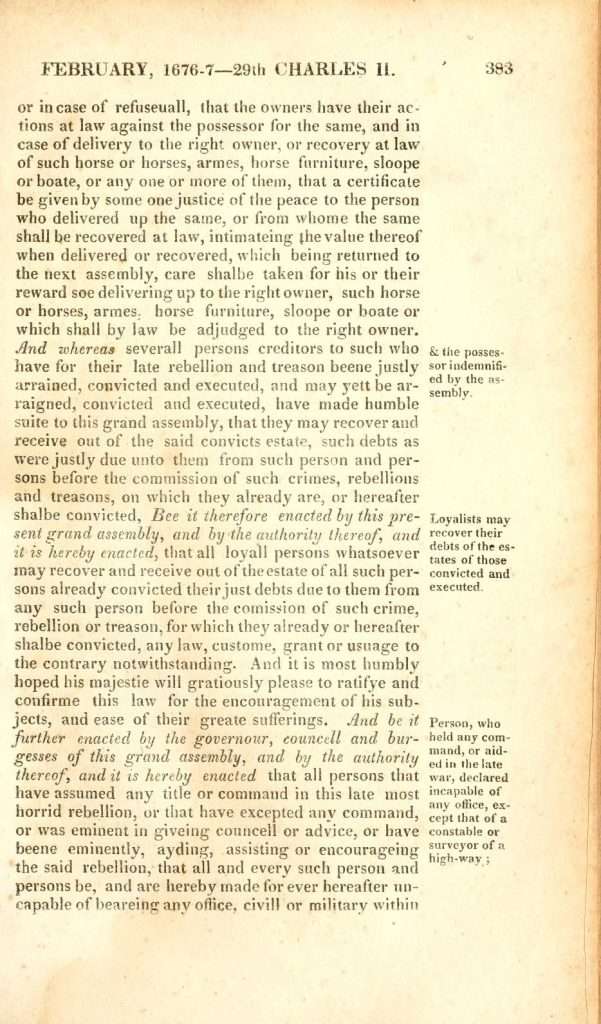 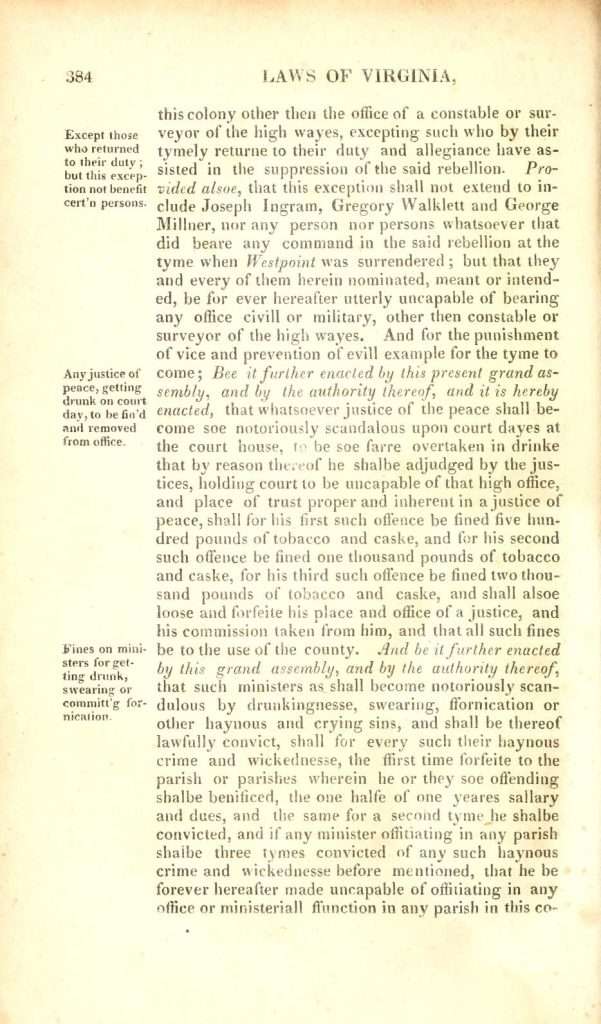 this colony other then the office of a constable or surveyor of the high wayes, excepting such who by their tymely returne to their duty and allegiance have assisted in the suppression of the said rebellion. Provided alsoe, that this exception shall not extend to include Joseph Ingram, Gregory Walklett and George Millner, nor any person nor persons whatsoever that did beare any command in the said rebellion at the tyme when Westpoint was surrendered; but that they and every of them herein nominated, meant or intended, be for ever hereafter utterly uncapable of bearing any office civill or military, other then constable or surveyor of the high wayes. And for the punishment of vice and prevention of evill example for the tyme to come; Bee it further enacted by this present grand assembly, and by the authority thereof, and it is hereby enacted, that whatsoever justice of the peace shall become soe notoriously scandalous upon court dayes at the court house, to be soe farre overtaken in drinke that by reason thereof he shalbe adjudged by the justices, holding court to be uncapable of that high office, and place of trust proper and inherent in a justice of peace, shall for his first such offence be fined five hundred pounds of tobacco and caske, and for his second such offence be fined one thousand pounds of tobacco and caske, for his third such offence be fined two thousand pounds of tobacco and caske, and shall alsoe loose and forfeite his place and office of a justice, and his commission taken from him, and that all such fines be to the use of the county. And be it further enacted by this grand assembly, and by the authority thereof, that such ministers as shall become notoriously scandalous by drunkingnesse, swearing, ffornication or other haynous and crying sins, and shall be thereof lawfully convict, shall for every such their haynous crime and wickednesse, the ffirst time forfeite to the parish or parishes wherein he or they soe offending shalbe benificed, the one halfe of one yeares sallary and dues, and the same for a second tyme he shalbe convicted, and if any minister offitiating in any parish shalbe three tymes convicted of any such haynous crime and wickednesse before mentioned, that he be forever hereafter made uncapable of offitiating in any office or ministeriall ffunction in any parish in this co- 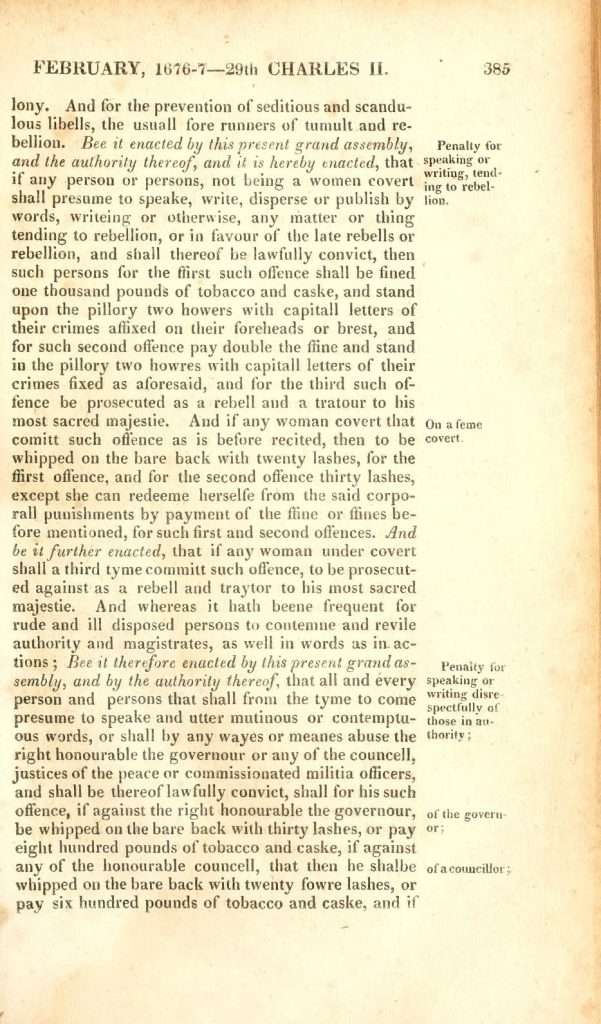 lony. And for the prevention of seditious and scandulous libells, the usuall fore runners of tumult and rebellion. Bee it enacted by this present grand assembly, and the authority thereof, and it is hereby enacted, that if any person or persons, not being a women covert shall presume to speake, write, disperse or publish by words, writeing or otherwise, any matter or thing tending to rebellion, or in favour of the late rebells or rebellion, and shall thereof be lawfully convict, then such persons for the ffirst such offence shall be fined one thousand pounds of tobacco and caske, and stand upon the pillory two howers with capitall letters of their crimes affixed on their foreheads or brest, and for such second offence pay double the ffine and stand in the pillory two howres with capitall letters of their crimes fixed as aforesaid, and for the third such offence be prosecuted as a rebell and a tratour to his most sacred majestie. And if any woman covert that comitt such offence as is before recited, then to be whipped on the bare back with twenty lashes, for the ffirst offence, and for the second offence thirty lashes, except she can redeeme herselfe from the said corporall punishments by payment of the ffine or ffines before mentioned, for such first and second offences. And be it further enacted, that if any woman under covert shall a third tyme commit such offence, to be prosecuted against as a rebell and traytor to his most sacred majestie. And whereas it hath beene frequent for rude and ill disposed persons to contemne and revile authority and magistrates, as well in words as in actions; Bee it therefore enacted by this present grand assembly, and by the authority thereof, that all and every person and persons that shall from the tyme to come presume to speake and utter mutinous or contemptuous words, or shall by any wayes or meanes abuse the right honourable the governour or any of the councell, justices of the peace or commissionated militia officers, and shall be thereof lawfully convict, shall for his such offence, if against the right honourable the governour, be whipped on the bare back with thirty lashes, or pay eight hundred pounds of tobacco and caske, if against any of the honourable councell, that then he shalbe whipped on the bare back with twenty fowre lashes, or pay six hundred pounds of tobacco and caske, and if 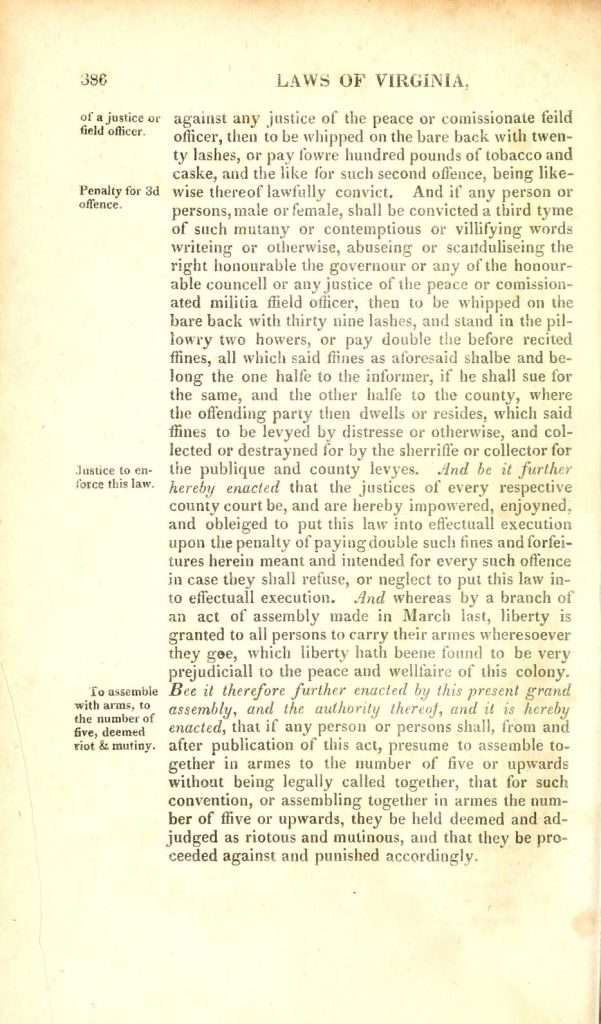 against any justice of the peace or comissionate feild officer, then to be whipped on the bare back with twenty lashes, or pay fowre hundred pounds of tobacco and caske, and the like for such second offence, being likewise thereof lawfully convict. And if any person or persons, male or female, shall be convicted a third tyme of such mutany or contemptuous or vilifying words writeing or otherwise, abuseing or scanduliseing the right honourable the governour or any of the honourable councell or any justice of the peace or commionated militia ffield officer, then to be whipped on the bare back with thirty nine lashes, and stand in the pillowry two howers, or pay double the before recited ffines, all which said ffines as aforesaid shalbe and belong the one halfe to the informer, if he shall sue for the same, and the other halfe to the county, where the offending party then dwells or resides, which said ffines to be levyed by distresse or otherwise, and collected or destrayned for by the sherriffe or collector for the publique and county levyes. And be it further hereby enacted that the justices of every respective county court be, and are hereby impowered, enjoyned, and obleiged to put this law into effectuall execution upon the penalty of paying double such fines and forfeitures herein meant and intended for every such offence in case they shall refuse, or neglect to put this law into effectuall execution. And whereas by a branch of an act of assembly made in March last, liberty is granted to all persons to carry their armes wheresoever they goe, which liberty hath beene found to be very prejudiciall to the peace and wellfaire of this colony. Bee it therefore further enacted by this present grand assembly, and the authority thereof, and it is hereby enacted, that if any person or persons shall, from and after publication of this act, presume to assemble together in armes to the number of five or upwards without being legally called together, that for such convention, or assembling together in armes the number of ffive or upwards, they be held deemed and adjudged as riotous and mutinous, and that they be proceeded against and punished accordingly.

RELATED CONTENT
Categories:
Type:
MAP
TIMELINE
February 1677
The General Assembly passes "An act for the reliefe of such loyall persons as have suffered losse by the late rebels."
CITE THIS ENTRY