Skip to content
Author: General AssemblyTranscription Source: William Waller Hening, ed., The Statutes at Large: Being a Collection of All Laws of Virginia, from the First Session of the Legislature, in the Year 1619 (Philadelphia: R. & W. & G. Bartow, 1823), 3:86–88.
FULL TEXT 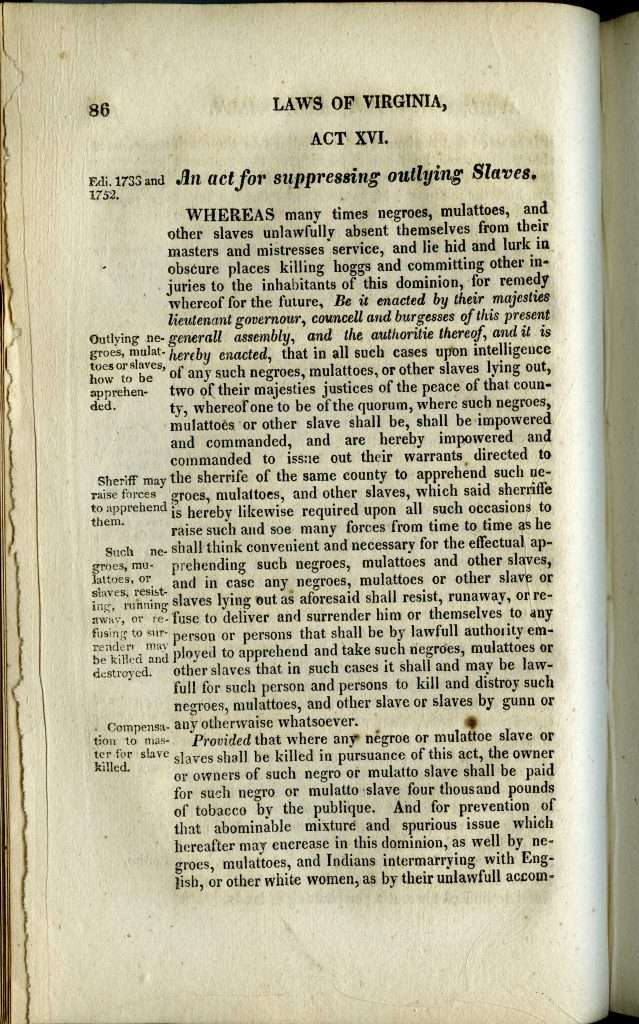 Provided that where any negroe or mulattoe slave or slaves shall be killed in pursuance of this act, the owner or owners of such negro or mulatto slave shall be paid for such negro or mulatto slave four thousand pounds of tobacco by the publique. And for prevention of that abominable mixture and spurious issue which hereafter may encrease in this dominion, as well by negroes, mulattoes, and Indians intermarrying with English, or other white women, as by their unlawfull accom- 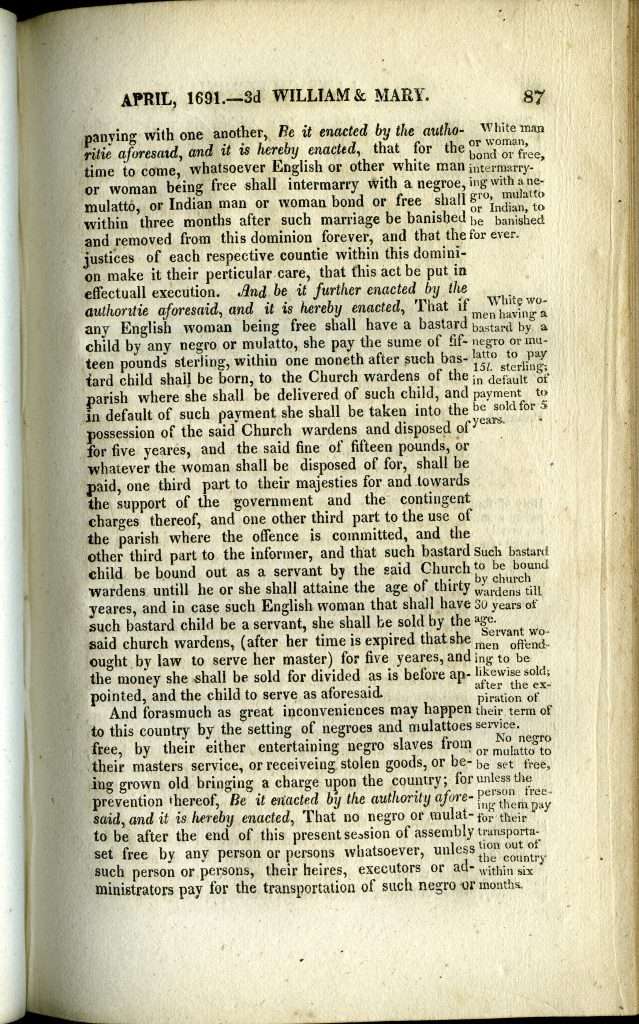 panying with one another, Be it enacted by the authoritie aforesaid, and it is hereby enacted, that for the time to come, whatsoever English or other white man or woman being free shall intermarry with a negroe, mulatto, or Indian man or woman bond or free shall within three months after such marriage be banished and removed from this dominion forever, and that the justices of each respective countie within this dominion make it their perticular care, that this act be put in effectuall execution. And be it further enacted by the authoritie aforesaid, and it is hereby enacted, That if any English woman being free shall have a bastard child by any negro or mulatto, she pay the sume of fifteen pounds sterling, within one moneth after such bastard child be born, to the Church wardens of the parish where she shall be delivered of such child, and in default of such payment she shall be taken into the possession of the said Church wardens and disposed of for five yeares, and the said fine of fifteen pounds, or whatever the woman shall be disposed of for, shall be paid, one third part to their majesties for and towards the support of the government and the contingent charges thereof, and one other third part to the use of the parish where the offence is committed, and the other third part to the informer, and that such bastard child be bound out as a servant by the said Church wardens untill he or she shall attaine the age of thirty yeares, and in case such English woman that shall have such bastard child be a servant, she shall be sold by the said church wardens, (after her time is expired that she ought by law to serve her master) for five yeares, and the money she shall be sold for divided as is before appointed, and the child to serve as aforesaid.

And forasmuch as great inconveniences may happen to this country by the setting of negroes and mulattoes free, by their either entertaining negro slaves from their masters service, or receiveing stolen goods, or being grown old bringing a charge upon the country; for prevention thereof, Be it enacted by the authority aforesaid, and it is hereby enacted, That no negro or mulatto be after the end of this present session of assembly set free by any person or persons whatsoever, unless such person or persons, their heires, executors or administrators pay for the transportation of such negro or 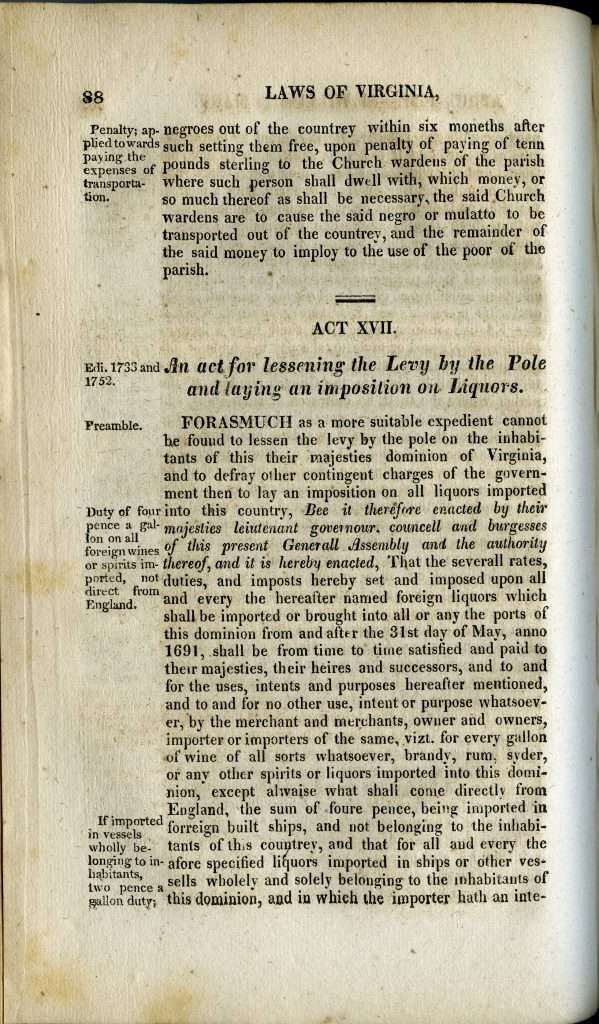 negroes out of the countrey within six moneths after such setting them free, upon penalty of paying of tenn pounds sterling to the Church wardens of the parish where such person shall dwell with, which money, or so much thereof as shall be necessary, the said Church wardens are to cause the said negro or mulatto to be transported out of the countrey, and the remainder of the said money to imploy to the use of the poor of the parish.

RELATED CONTENT
Categories:
Type:
MAP
TIMELINE
April 3, 1691
The General Assembly passes "An act for suppressing outlying slaves," which grants county sheriffs, their deputies, and any other "lawfull authority" the ability to kill any slaves resisting, running away, or refusing to surrender when so ordered. The act seeks to prevent "abominable mixture and spurious issue" by prohibiting mixed-race marriages.
CITE THIS ENTRY