Skip to content
Author: General AssemblyTranscription Source: William Waller Hening, ed.,The Statutes at Large; Being a Collection of All the Laws of Virginia from the First Session of the Legislature in the Year 1619(Richmond: J. & G. Cochran, 1821), 12:154–158.
FULL TEXT 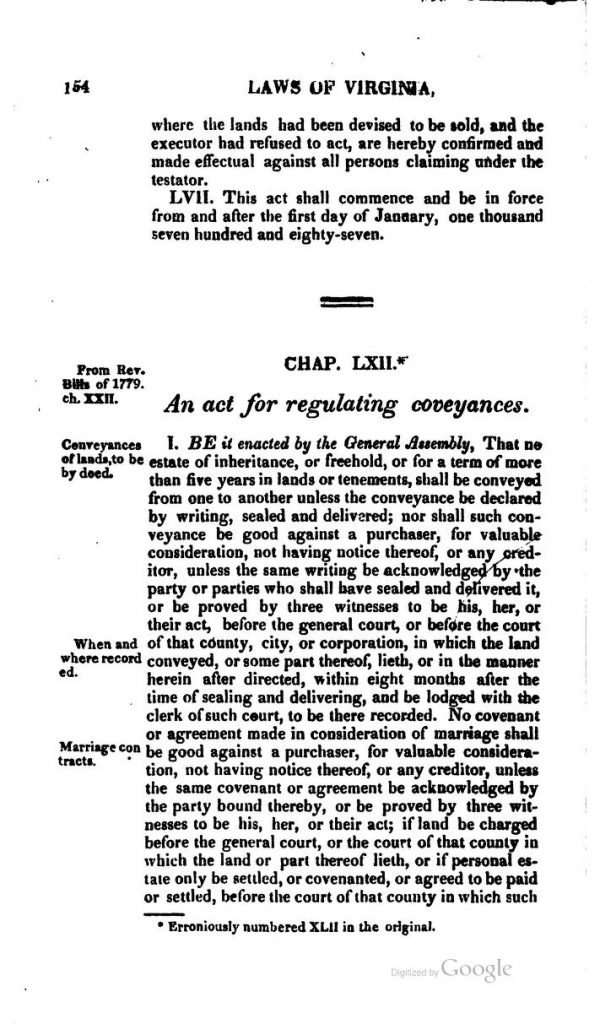 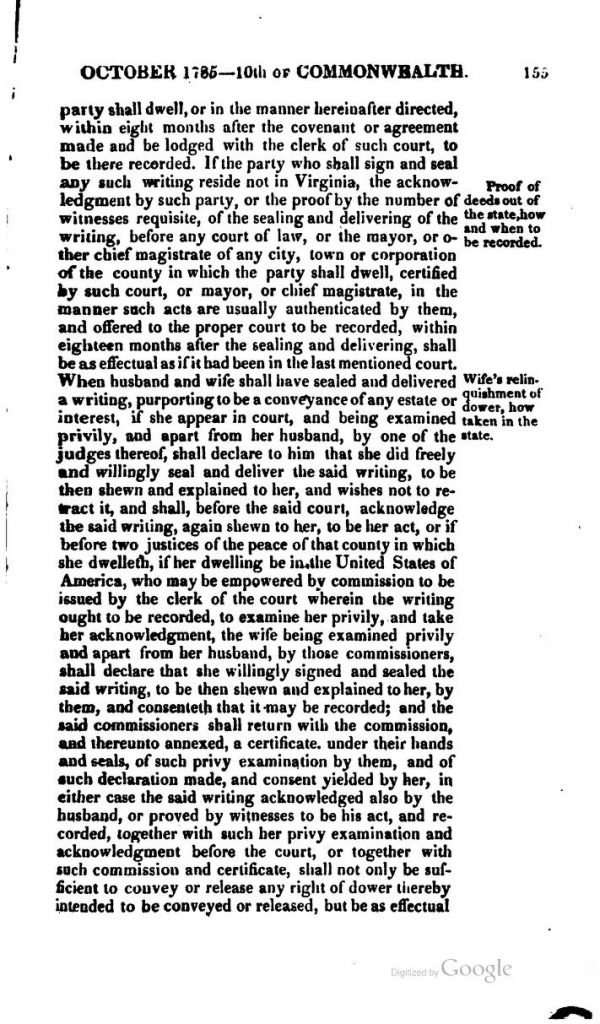 party shall dwell, or in the manner hereinafter directed, within eight months after the covenant or agreement made and be lodged with the clerk of such court, to be there recorded. If the party who shall sign and seal any such writing reside not in Virginia, the acknowledgment by such party, or the proof by the number of witnesses requisite, of the sealing and delivering of the writing, before any court of law, or the mayor, or other chief magistrate of any city, town or corporation of the county in which the party shall dwell, certified by such court, or mayor, or chief magistrate, in the manner such acts are usually authenticated by them, and offered to the proper court to be recorded, within eighteen months after the sealing and delivering, shall be as effectual as if it had been in the last mentioned court. When husband and wife shall have sealed and delivered a writing, purporting to be a conveyance of any estate or interest, if she appear in court, and being examined privily, and apart from her husband, by one of the judges thereof, shall declare to him that she did freely and willingly seal and deliver the said writing, to be then shewn and explained to her, and wishes not to retract it, and shall, before the said court, acknowledge the said writing, again shewn to her, to be her act, or if before two justices of the peace of that county in which she dwelleth, if here dwelling be in the United states of America, who may be empowered by commission to be issued by the clerk of the court wherein the writing ought to be recorded, to examine her privily, and take her acknowledgment, the wife being examined privily and apart from her husband, by those commissioners, shall declare that she willingly signed and sealed the said writing, to be then shewn and explained to her, by them, and consenteth that it may be recorded; and the said commissioners shall return with the commission, and thereunto annexed, a certificate, under their hands and seals, of such privy examination by them, and of such declaration made, and consent yielded by her, in either case the said writings acknowledged also by the husband, or proved by witnesses to be his act, and recorded, together with such her privy examination and acknowledgment before the court, or together with such commission and certificate, shall not only be sufficient to convey or release any right of dower thereby intended to be conveyed or released, but be as effectual 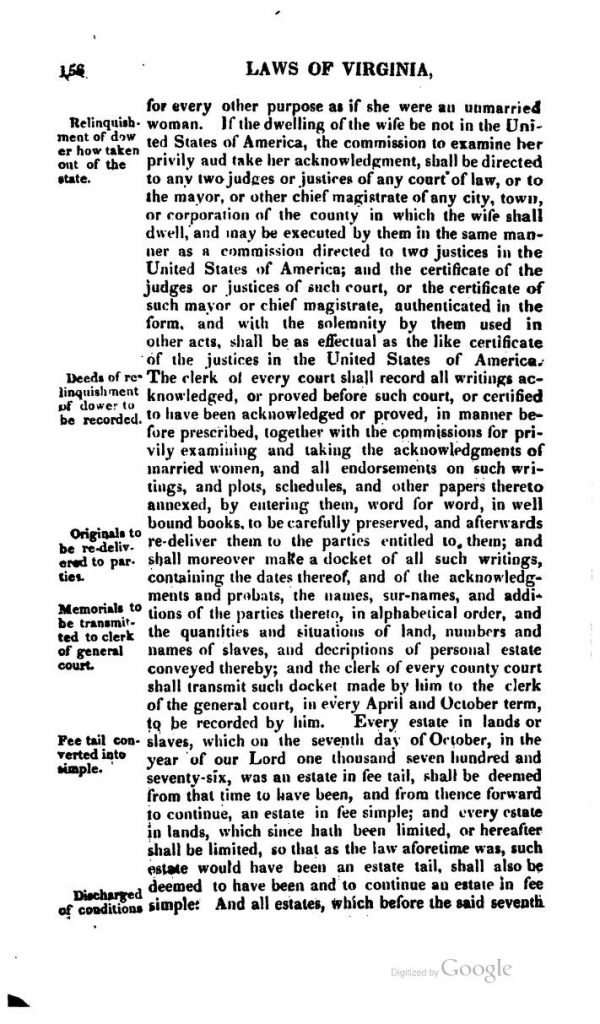 for every other purpose as if she were an unmarried woman. If the dwelling of the wife be not in the United States of America, the commission to examine her privily and take her acknowledgment, shall be directed to any two judges or justices of any court of law, or to the mayor, or other chief magistrate of any city, town, or corporation of the county in which the wife shall dwell, and may be executed by them in the same manner as a commission directed to two justices in the United States of America; and the certificate of the judges or justices of such court, or the certificate of such mayor or chief magistrate, authenticated in the form, and with the solemnity by them used in other acts, shall be as effectual as the like certificate of the justices in the United States of America. The clerk of every court shall record all writing acknowledged, or proved before such court, or certified to have been acknowledge or proved, in manner before prescribed, together with the commissions for privily examining and taking the acknowledgments of married women, and all endorsements on such writings, and plots, schedules, and other papers thereto annexed, by entering them, word for word, in well bound books, to be carefully preserved, and afterwards re-deliver them to the parties entitled to them; and shall moreover make a docket of all such writings, containing the dates thereof, and of the acknowledgments and probats, the names, sur-names, and additions of the parties thereto, in alphabetical order, and the quantities and situations of land, numbers and names of slaves, and decriptions [sic] of personal estate conveyed thereby; and the clerk of every county court shall transmit such docket made by him to the clerk of the general court, in every April and October term, to be recorded by him. Every estate in lands or slaves, which on the seventh day of October, in the year of our Lord one thousand seven hundred and seventy-six, was an estate in fee tail, shall be deemed from that time to have been, and from thence forward to continue, an estate in fee simple; and every estate in lands, which since hath been limited, or hereafter shall be limited, so that as the law aforetime was, such estate would have been an estate tail, shall also be deemed to have been and to continue an estate in fee simple: And all estates, which before the said seventh 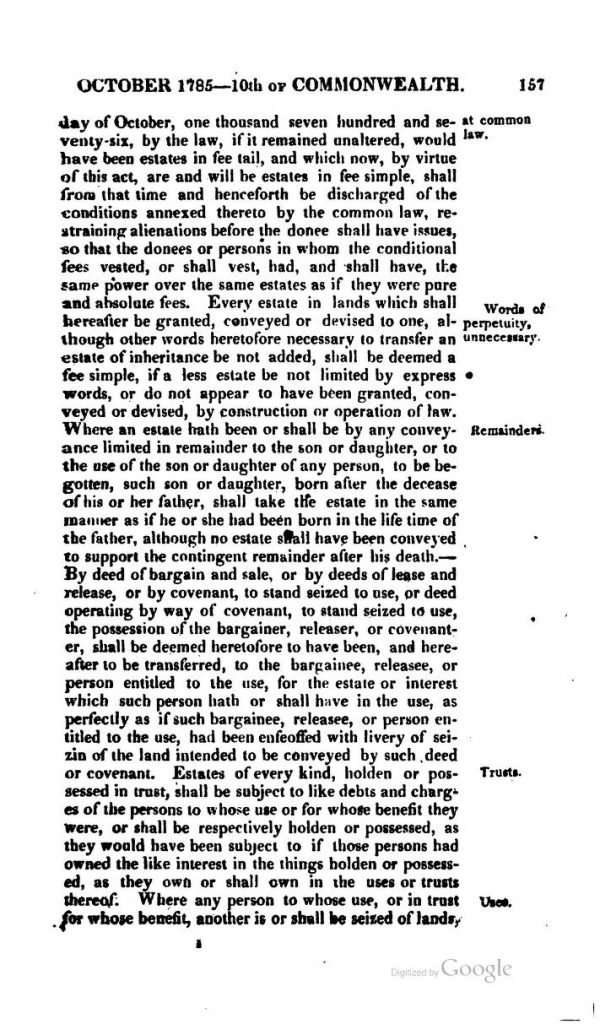 day of October, one thousand seven hundred and seventy-six, by the law, if it remained unaltered, would have been estates in fee tail, and which now, by virtue of this act, are and will be estates in fee simple, shall from that time and henceforth be discharged of the conditions annexed thereto by the common law, restraining alienations before the donee shall have issues, so that the donees or persons in whom the conditional fees vested, or shall vest, had, and shall have, the same power over the same estates as if they were pure and absolute fees. Every estate in lands which shall hereafter be granted, conveyed or devised to one, although other words heretofore necessary to transfer an estate of inheritance be not added, shall be deemed a fee simple, if a less estate be not limited by express words, or do not appear to have been granted, conveyed or devised, by construction or operation of law. Where an estate hath been or shall be by any conveyance limited in remainder to the son or daughter, or to the use of the son or daughter of any person, to be begotten, such son or daughter, born after the decease of his or her father, shall take the estate in the same manner as if he or she had been born in the life time of the father, although no estate shall have been conveyed to support the contingent remainder after his death. — By deed of bargain and sale, or by deeds of lease and release, or by covenant, to stand seized to use, the possession of the bargainer, releaser, or covenanter, shall be deemed heretofore to have been, and hereafter to be transferred, to the bargainee, releasee, or person entitled to the use, for the estate or interest which such person hath or shall have in the use, as perfectly as if such bargainee, releasee, or person entitled to the use, had been enfeoffed with livery of seizin of the land intended to be conveyed by such deed or covenant. Estates of every kind, holden or possessed in trust, shall be subject to like debts and charges of the persons to whose use or for whose benefit they were, or shall be respectively holden or possessed, as they would have been subject to if those persons had owned the like interest in the things holden or possessed, as they own or shall own in the uses or trusts thereof. Where any person to whose use, or in trust for whose benefit, another is or shall be seized of lands; 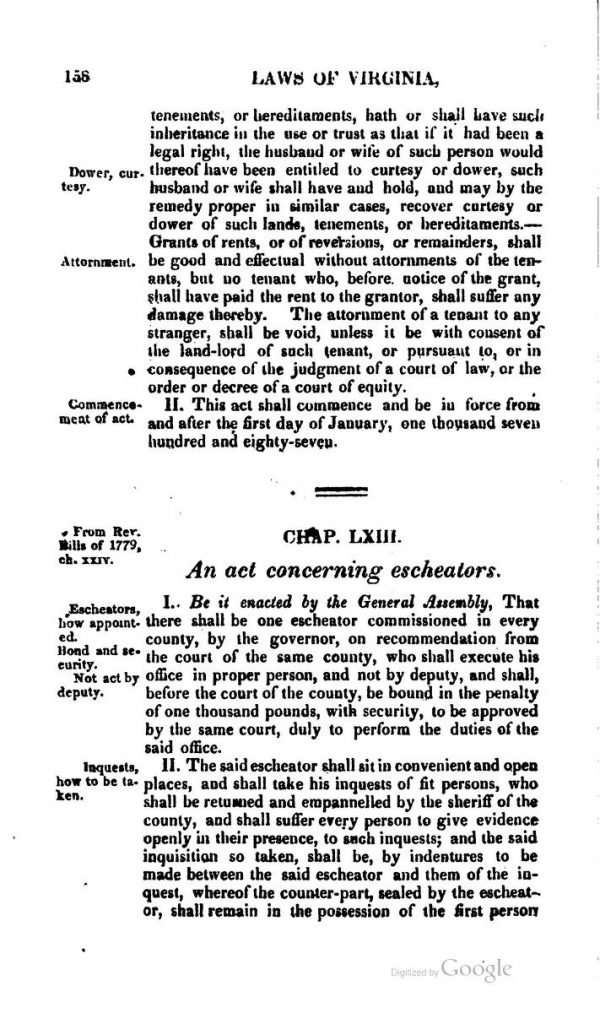 tenements, or hereditaments, hath or shall have such inheritance in the use or trust as that if it had been a legal right, the husband or wife of such person would thereof have been entitled to curtsey or dower, such husband or wife shall have and hold, and may by the remedy proper in similar cases, recover curtsey or dower of such lands, tenement s, or hereditaments. −− Grants of rents, or of reversions, or remainders, shall be good and effectual without attornments of the tenants, but no tenant who, before notice of the grant, shall have paid the rent to the grantor, shall suffer any damage thereby. The attornment of a tenant to any stranger, shall be void, unless it be with consent of the land-lord of such tenant, or pursuant to, or in consequence of the judgment of a court of law, or the order or decree of a court of equity.

This act shall commence and be in force from and after the first day of January, one thousand seven hundred and eighty-seven.