Skip to content
Author: General AssemblyTranscription Source: William Waller Hening, ed., The Statutes at Large; Being a Collection of All the Laws of Virginia from the First Session of the Legislature in the Year 1619 (New York: R. & W. & G. Bartow, 1823), 2:193–194.
FULL TEXT 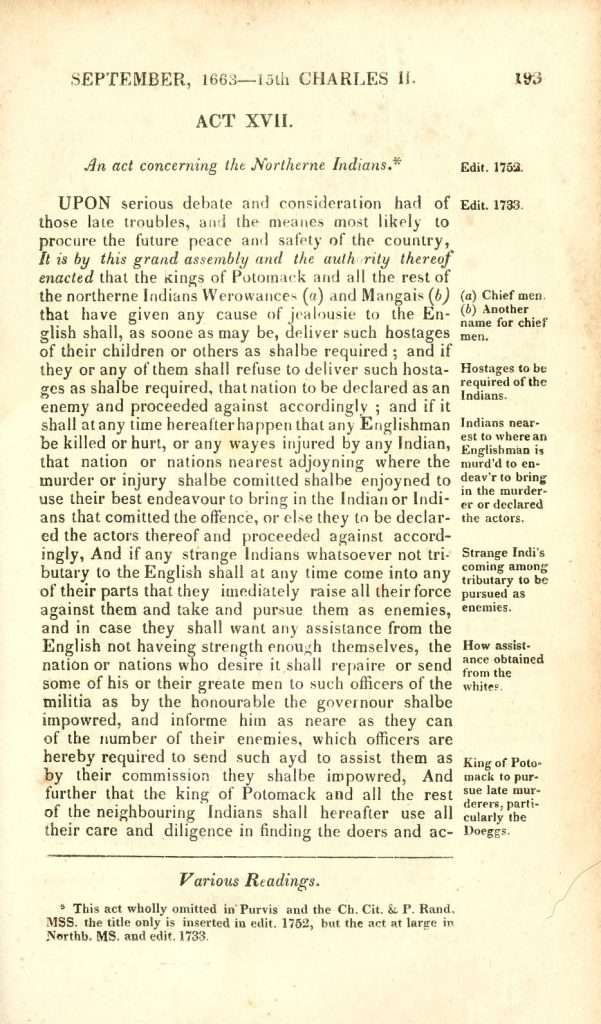 UPON serious debate and consideration had of those late troubles, and the meanes most likely to procure the future peace and safety of the country, It is by this grand assembly and the authority thereof enacted that the kings of Potomack and all the rest of the northerne Indians Werowances (a) and Mangais (b) that have given any cause of jealousie to the English shall, as soone as may be, deliver such hostages of their children or others as shalbe required; and if they or any of them shall refuse to deliver such hostages as shalbe required, that nation to be declared as an enemy and proceeded against accordingly; and if it shall at any time hereafter happen that any Englishman be killed or hurt, or any wayes injured by any Indian, that nation or nations nearest adjoyning where the murder or injury shalbe comitted shalbe enjoyned to use their best endeavour to bring in the Indian or Indians that comitted the offence, or else they to be declared the actors thereof and proceeded against accordingly, And if any strange Indians whatsoever not tributary to the English shall at any time come into any of their parts that they imediately raise all their force against them and take and purse them as enemies, and in case they shall want any assistance from the English not haveing strength enough themselves, the nation or nations who desire it shall repaire or sent some of his or their greate men to such officers of the militia as by the honourable the governour shalbe impowred, and informe him as neare as they can of the number of their enemies, which officers are hereby required to send such ayd to assist them as by their commission they shalbe impowred, And further that the king of Potomack and all the rest of the neighbouring Indians shall hereafter use all their care and diligence in finding the doers and ac- 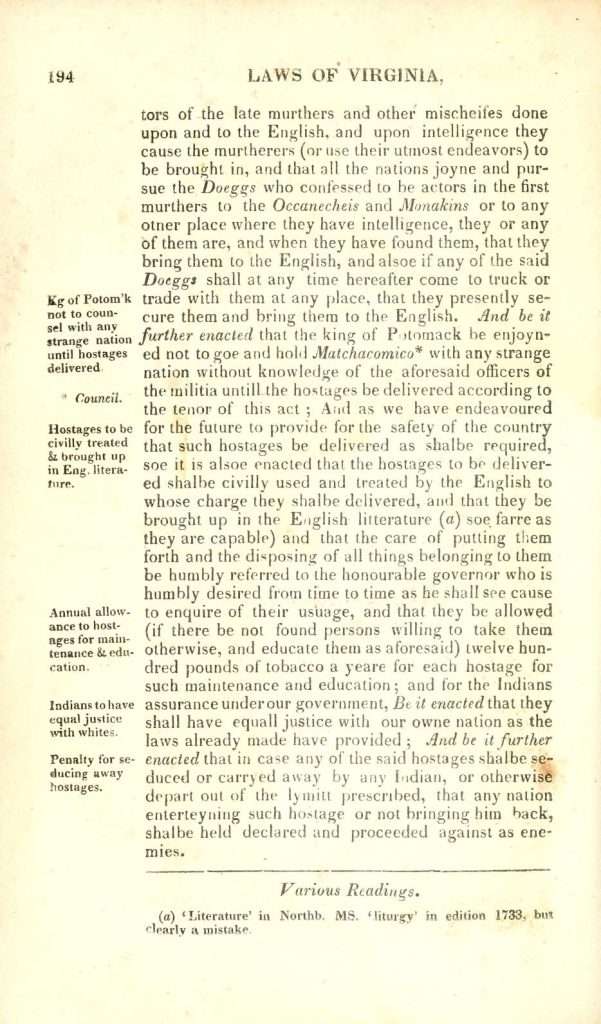 tors of the late murthers and other mischeifes done upon and to the English, and upon intelligence they cause the murtherers (or use their utmost endeavors) to be brought in, and that all the nations joyne and pursue the Doeggs who confessed to be actors in the first murthers to the Occanecheis and Monakins or to anyotner [other] place where they have intelligence, they or any of them are, and when they have found them, that they bring them to the English, and alsoe if any of the said Doeggs shall at any time hereafter come to truck or trade with them at any place, that they presently secure them and bring them to the English. And be it further enacted that the king of Potomack be enjoyned not to goe and hold Matchacomico with any strange nation without knowledge of the aforesaid officers of the militia untill the hostages be delivered according to the tenor of this act; And as we have endeavoured for the future to provide for the safety of the country that such hostages be delivered as shalbe required, soe it is alsoe enacted that the hostages to be delivered shalbe civilly used and treated by the English to whose charge they shalbe delivered, and that they be brought up in the English litterature (a) soe farre as they are capable) and that the care of putting them forth and the disposing of all things belonging to them be humbly referred to the honourable governor who is humbly desired from time to time as he shall see cause to enquire of their usuage, and that they be allowed (if there be not found persons willing to take them otherwise, and educate them as aforesaid) twelve hundred pounds of tobacco a yeare for each hostage for such maintenance and education; and for the Indians assurance under our government, Be it enacted that they shall have equall justice with our owne nation as the laws already made have provided; And it be further enacted that in case any of the said hostages shalbe seduced or carryed away by any Indian, or otherwise depart out of the lymitt prescribed, that any nation enterteyning such hostage or not bringing him back, shalbe held declared and proceeded against as enemies.