Skip to content
Author: General AssemblyTranscription Source: William Waller Hening, ed., The Statutes at Large; Being a Collection of All the Laws of Virginia from the First Session of the Legislature in the Year 1619 (New York: R. & W. & G. Bartow, 1823), 2:220–221.
FULL TEXT 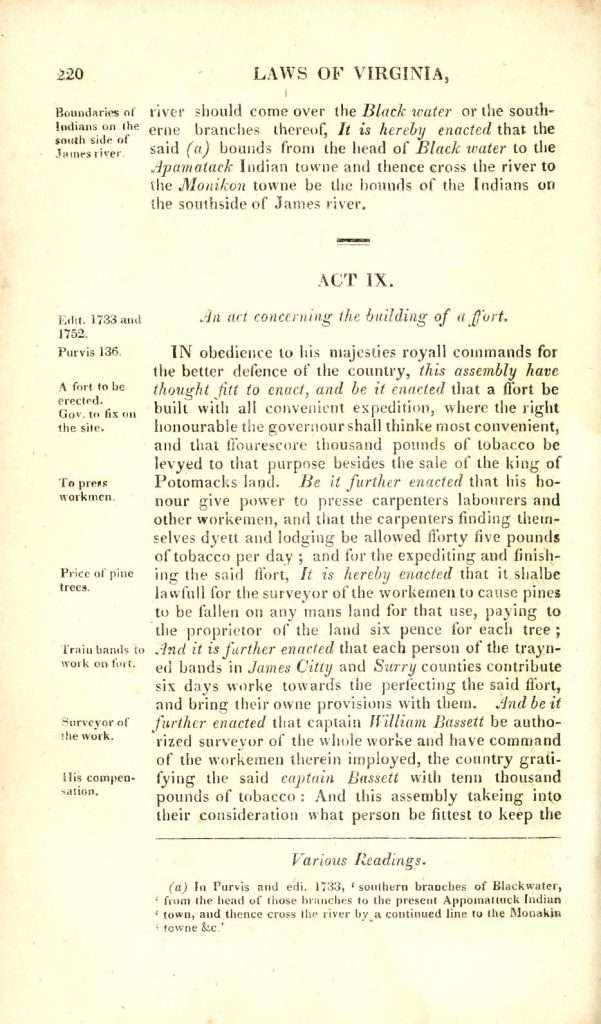 IN obedience to his majesties royall commands for the better defence of the country, this assembly have thought fitt to enact, and be it enacted that a ffort be built with all convenient expedition, where the right honourable the governour shall thinke most convenient, and that ffourescore thousand pounds of tobacco be levyed to that purpose besides the sale of the king of Potomacks land. Be it further enacted that his honour give power to presse carpenters labourers and other workemen, and that the carpenters finding themselves dyett and lodging be allowed fforty five pounds of tobacco per day; and for the expediting and finishing the said ffort, It is hereby enacted that it shalbe lawfull for the surveyor of the workemen to cause pines to be fallen on any mans land for that use, paying to the proprietor of the land six pence for each tree; And it is further enacted that each person of the trayned bands in James Citty and Surry counties contribute six days worke towards the perfecting the said ffort, and bring their owne provisions with them. And be it further enacted that captain William Bassett be authorized surveyor of the whole worke and have command of the workemen therein imployed, the country gratifying the said captain Bassett with tenn thousand pounds of tobacco: And this assembly takeing into their consideration what person be fittest to keep the 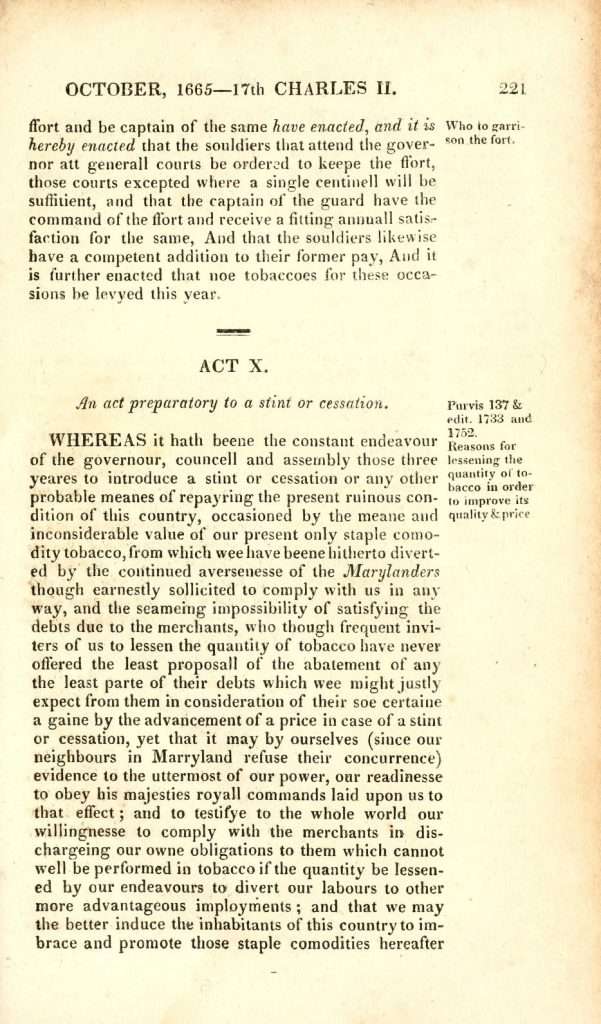 ffort and be captain of the same have enacted, and it is hereby enacted that the souldiers that attend the governor att generall courts be ordered to keepe the ffort, those courts excepted where a single centinell will be suffitient, and that the captain of the guard have the command of the ffort and receive a fitting annuall satisfaction for the same, And that the souldiers likewise have a competent addition to their former pay, And it is further enacted that noe tobaccoes for these occasions be levyed this year.

RELATED CONTENT
Categories:
Type:
MAP
TIMELINE
October 1665
In "An act concerning the building of a ffort," the General Assembly requires that the Patawomeck sell all of their remaining land for the site of a fort.
FURTHER READING