Skip to content
Author: General Assembly Transcription Source: William Waller Hening, ed., The Statutes at Large; Being a Collection of All the Laws of Virginia from the First Session of the Legislature in the Year 1619 (Richmond, Virginia: Samuel Pleasants, 1812), 3:122.
FULL TEXT 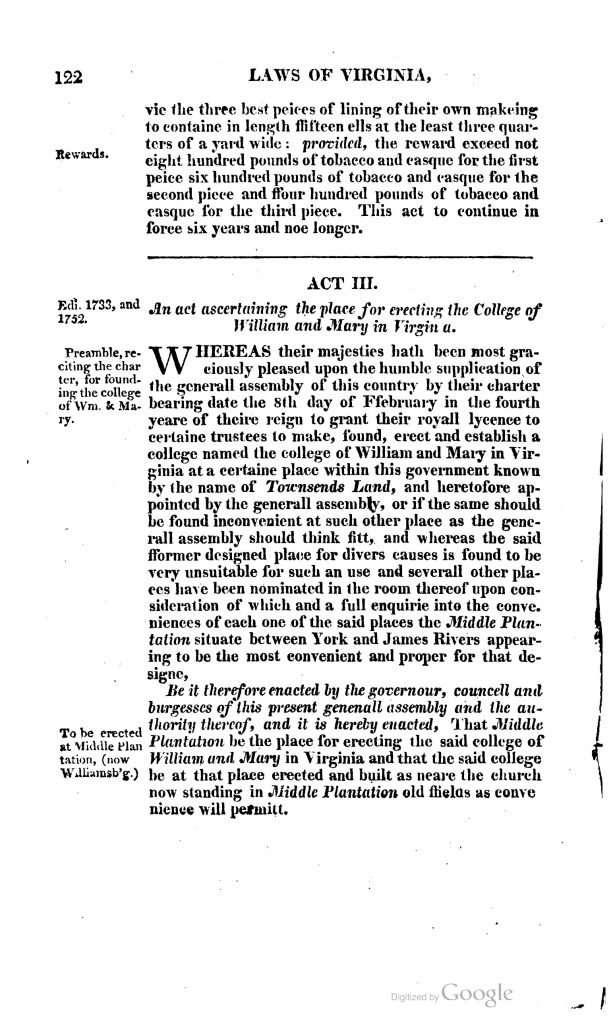 The Statutes at Large; Being a Collection of All the Laws of Virginia from the First Session of the Legislature in the Year 1619 (1812), Volume 3, Page 122

An act ascertaining the place for erecting the College of William and Mary in Virginia.

WHEREAS their majesties have been most graciously pleased upon the humble supplication of the generall assembly of this country by their charter bearing date the 8th day of Ffebruary in the fourth yeare of their reign to grant their royall lycence to certain trustees to make, found, erect and establish a college named the college of William and Mary in Virginia at a certaine place within this government known by the name of Townsends Lane, and heretofore appointed by the generall assembly, or if the same should be found inconvenient at such other place as the generall assembly should think fitt, and whereas the said fformer designed place for divers causes is found to be very unsuitable for such an use and severall other places have been nominated in the room thereof upon consideration of which and a full enquirie into the conveniences of each one of the said places the Middle Plantation situate between York and James Rivers appearing to be the most convenient and proper for that designe, Preamble, reciting the charter, for founding the college of Wm. and Mary.

Be it therefore enacted by the governour, councell and burgesses of this present generall assembly and the authority thereof, and it is hereby enacted That Middle Plantation be the place for erecting the said college of William and Mary in Virginia and that the said college be at that place erected and built as neare the church now standing in Middle Plantation old ffields as convenience will permitt.