Edward Morrison Alfriend was born in Richmond on October 25, 1837, the eldest of three sons and a daughter of Thomas Morrison Alfriend and Mary Jane Eger Alfriend. His father was a prominent Richmond businessman, president of the Virginia Fire and Marine Insurance Company, and founder of his own insurance company, Thomas M. Alfriend and Son.

Ned Alfriend, as he was known to his family and friends, was educated in Richmond and joined his father’s insurance business late in the 1850s. On June 10, 1861, he enlisted in the Richmond Zouaves, Company E, 44th Virginia Infantry Regiment, and served as first lieutenant and as captain of the company. He had a checkered career in the Confederate army. On May 24, 1864, he was fined twenty-five days’ pay for being absent without leave. He returned to the company but then contracted typhoid fever in June 1864 during the Shenandoah Valley Campaign and went to Richmond to recuperate. Alfriend was arrested on January 4, 1865, and charged with being absent without leave and disobeying orders. On February 13, 1865, a court-martial convicted him on both charges and cashiered him from the army. Several officers from the brigade supported his appeal to Confederate president Jefferson Davis in March, but the war ended before any action was taken on his case.

After the war Alfriend resumed his work in the family insurance company with his father and youngest brother, Thomas Lee Alfriend. He quickly won wide recognition in the business. In 1871 Virginia governor Gilbert C. Walker named him a delegate to the National Insurance Convention, and Alfriend later testified before a committee of the House of Delegates about a general insurance bill that the convention had proposed. 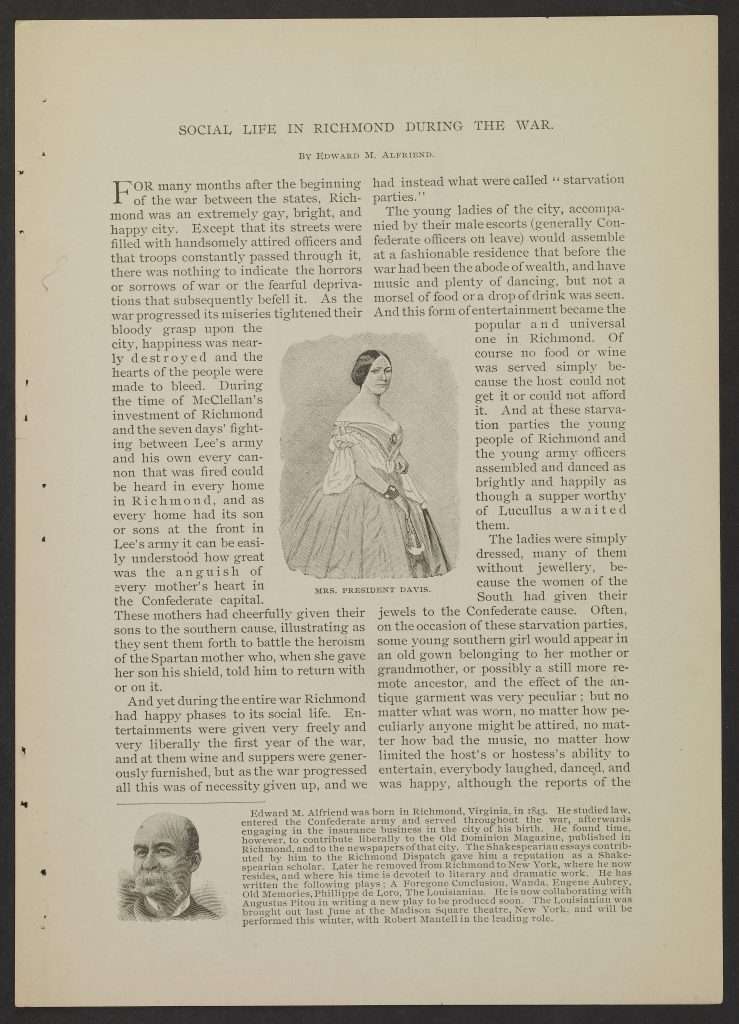 Social Life in Richmond During the War

Perhaps drawn by the example of his younger brother, Frank Heath Alfriend, he began to write. He published several articles in the Old Dominion Magazine and wrote at least one play while still living in Richmond. In the autumn of 1889 he left the insurance business in Thomas Lee Alfriend’s hands and moved to New York to devote his full attention to his literary work. He contributed occasionally to magazines, writing articles for such journals as Cosmopolitan and Lippincott’s. By the time of his death he had also written at least fourteen plays, several of which were produced in New York.

His first staged play, A Foregone Conclusion, an adaptation of William Dean Howells’s novel of the same name, opened at Palmer’s Theatre in June 1890. Other openings included The Louisianian at Madison Square Theatre in June 1891; Across the Potomac (written with Augustus Pitou) at Proctor’s Theatre in April 1892; The Great Diamond Robbery (written with noted critic Andrew Carpenter Wheeler) at the American Theatre in September 1895; New York (also written with Wheeler) at the American Theatre in February 1897; and The Magdalene at Murray Hill Theatre in November 1897. Reviewers dismissed both A Foregone Conclusion and The Louisianian, but Alfriend’s plays were popular with the public. Most of his work has not stood the test of time, and several of his plays have been lost. The Great Diamond Robbery, which was still being produced in 1905, was his most successful effort and has been included in two anthologies of popular nineteenth-century plays.

In 1891 Alfriend and Henrietta Lander, a New York actress who appeared in several of his plays, became engaged, but they never married. Alfriend died unexpectedly of kidney failure at his residence, Ashland House, in New York on October 24, 1901, and was buried in Hollywood Cemetery in Richmond.