Pauline Forstall Colclough Adams was born on June 29, 1874, in Dublin, Ireland, to Henry Vesey Colclough and Catherine Forstall Colclough. Sometime in her youth, perhaps in 1890, she immigrated to America with her family. By 1898 she was living in Brunswick County, North Carolina, where she married Norfolk physician Walter J. Adams on April 18. The couple moved to Norfolk and there he established a medical practice and she gave birth to their two sons. Unlike many women of her era, however, Adams’s life reached far beyond her household and into the community.

When the Woman’s Jamestown Association was formed in 1903 in preparation for the 1907 Jamestown Ter-Centennial Exposition, Adams joined, had a brief stint as associate editor of its publication, the Jamestown Bulletin, and served as treasurer from 1905 until the exposition ended. In 1906 she was elected head of Norfolk’s Jamestown Esperanto Club. She also belonged to the Housewives’ League. Of the many meetings that undoubtedly took place at Adams’s house, located in the Ghent area of the city, the most influential occurred on November 18, 1910, when the Norfolk Equal Suffrage League was organized there.

Adams served as the first president of the Norfolk league (a National American Woman Suffrage Association, or NAWSA, affiliate) and was reelected in 1911 and 1912 before declining to run again. During her last year as president the Equal Suffrage League held its state convention in Norfolk. She invented two popular suffrage games (now lost), Politics and Political Auction, which were sold in Virginia and Maryland in 1913 to raise funds for suffrage work. Adams advocated a more militant approach to winning the vote for women than her fellow Virginia suffragists, shunning the primarily educational activities of the Norfolk league in favor of speaking in the city’s streets and marching in Washington, D.C., during the national suffrage parade in March 1913. Her opinions and actions prompted a serious rift in the conservative Norfolk league and brought a reprimand from state league headquarters in Richmond. Before her decisive move toward militancy, Adams had been a rising star in the Virginia league, serving as one of its five vice presidents.

Despite the Equal Suffrage League’s censure, the Congressional Union for Woman Suffrage organized a Virginia chapter at a June 1915 meeting in Richmond. Founded in April 1913, the Congressional Union (CU) was originally formed as a section of NAWSA dedicated to the passage of a federal amendment. Serious differences soon divided the two groups. While the parent organization was committed to winning the vote through state campaigns, the CU demanded an exclusive campaign for a federal amendment and NAWSA expelled the CU. Techniques also differed, with NAWSA favoring an educational approach while the CU advocated more militant means, including campaigning against the Democratic Party and picketing. In 1917 the militants renamed themselves the National Woman’s Party. Adams—who had retained her membership while other members of the Equal Suffrage League withdrew—was elected a CU vice chairman at the 1915 meeting and later served as president of the Norfolk NWP branch from 1917 to 1920. Her NWP membership placed her in the minority among southern suffragists.

With the outbreak of World War I, Adams sprang into action, calling for the formation of a Women’s Home Guard in Norfolk in April 1917. She was sure that women would join, and planned to volunteer herself. Sixty women enlisted and were trained to guard the city’s bridges. Unlike the Equal Suffrage League, which suspended political activities in favor of charitable work, the National Woman’s Party continued the fight for suffrage during the war while also doing its part for America’s troops. As local NWP president, Adams led the women’s section of Norfolk’s Preparedness Parade and sold war bonds and stamps at local hotels. Other members volunteered for the Red Cross, entertained sailors with coffee and home-cooked meals, and chaperoned dances. 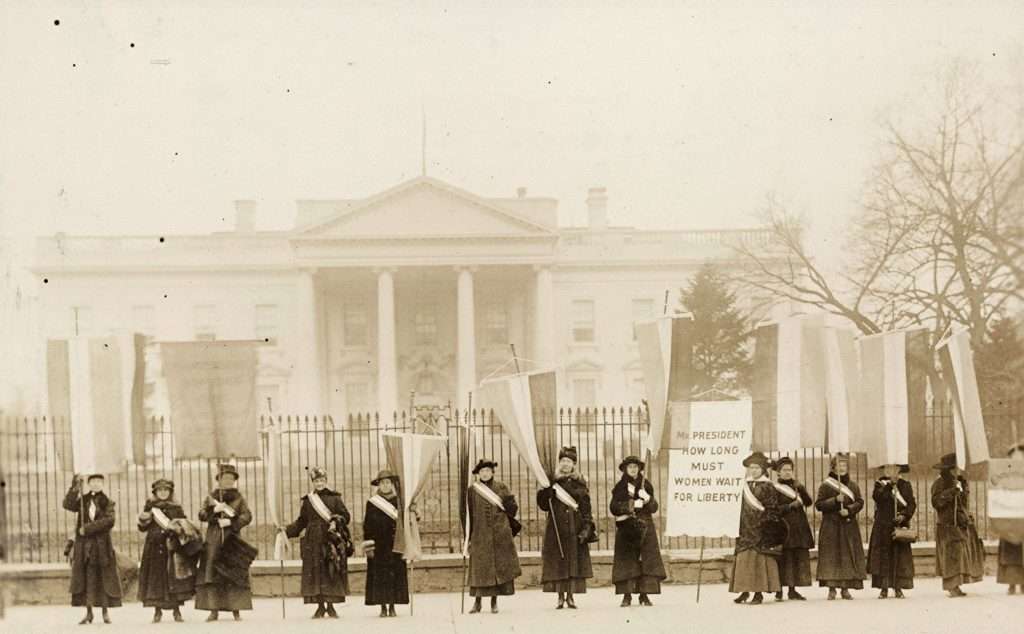 The war escalated the fight for suffrage. In the summer of 1917 the Equal Suffrage League of Virginia joined NAWSA in condemning women who picketed the White House. Adams joined the pickets multiple times and on September 4, 1917, she was one of thirteen picketers arrested in front of President Woodrow Wilson’s reviewing stand before a selective service parade. Officially charged with obstructing traffic, the women were described in newspaper accounts as attempting to “flaunt their banners.” Similar charges were already pending against her for picketing on August 23 and 28. Along with some of her fellow protesters, Adams addressed the court in her own defense. When given a choice between sixty days in jail or a $25 fine, the suffragists as a whole chose prison and were sent to the District of Columbia’s prison workhouse located in Fairfax County, just across the Occoquan River from the Prince William County town of that name.

In October she and some of the other suffragists signed a petition demanding that they be treated as political prisoners and not common inmates, but they were ignored. Not long after Adams was imprisoned, the Occoquan Workhouse was investigated, at the prompting of the National Woman’s Party, for mistreatment of its inmates. Adams complained, along with other prisoners, that the food was infested with worms and that women were deprived of blankets, combs, eyeglasses, soap, and (most offensive to her) toothbrushes.

Adams continued to take part in demonstrations and was arrested again on February 9, 1919, during a march on the White House but was released. The following week she and about two dozen other women who had endured conditions at the workhouse left Washington on a two-week cross-country trip. The National Woman’s Party raised $20,000 to hire a special train, called the Prison Special, that took them to sixteen cities as far away as Los Angeles and San Francisco. At each stop, Adams and the other former prisoners, clad in replicas of their prison attire, told their stories of protest and mistreatment. Motion pictures of their tour showed in theaters afterward. After Congress submitted the Nineteenth Amendment to the states later in the year, Adams lobbied members of the Virginia General Assembly to ratify it.

After the Nineteenth Amendment was ratified in August 1920, Adams looked for new challenges. In 1921 she passed the bar exam and became the second woman lawyer in Norfolk. She remained involved in politics, running unsuccessfully for city council and campaigning in November 1923 for Sarah Lee Fain, one of the first two women ever elected to the House of Delegates. That same month, Adams, who continued to serve as a vice chair of the Virginia NWP, participated in the National Woman’s Party delegation to President Calvin Coolidge seeking his support for an equal rights amendment. A member of Christ and Saint Luke’s Episcopal Church, Adams died of myocardial failure on September 10, 1957, and was buried in Elmwood Cemetery in Norfolk.

Sources consulted by the Dictionary of Virginia Biography :

RELATED CONTENT
Categories:
Type:
MAP
TIMELINE
June 29, 1874
Pauline Forstall Colclough is born in Dublin, Ireland, to Henry Vesey Colcough and Catherine Forstall Colclough.
ca. 1890
Pauline Forstall Colclough emigrates from Dublin, Ireland, to the United States with her family.
April 18, 1898
Pauline Forstall Colclough marries Walter J. Adams, a physician from Norfolk, in Brunswick County, North Carolina.
1903
Pauline Adams joins the Woman's Jamestown Association and briefly serves as associate editor of its publication, the Jamestown Bulletin. She serves as treasurer until 1905.
November 18, 1910
The Norfolk Equal Suffrage League is organized in a meeting at the house of Pauline Adams. Adams is elected the group's first president. She is reelected in 1911 and 1912.
1913
Politics and Political Auction, suffrage games invented by Pauline Adams, are sold in Virginia and Maryland to raise funds for suffrage work.
March 3, 1913
Pauline Adams joins the national suffrage parade in Washington, D.C.
April 1913
The Congressional Union for Woman Suffrage is founded as a section of the National American Woman Suffrage Association dedicated to the passage of an amendment to the U.S. Constitution giving women the vote.
1914
After the Congressional Union for Woman Suffrage campaigns against Democratic candidates, the nonpartisan National American Woman Suffrage Association expels the group.
June 10, 1915
The Congressional Union for Woman Suffrage organizes a Virginia chapter at a meeting in Richmond. Sophie Gooding Rose Meredith is elected chair of the Virginia branch. Pauline Adams is elected second vice chairman. Elizabeth Dabney Langhorne Lewis Otey is elected second vice chair.
1917
The Congressional Union for Woman Suffrage is renamed the National Woman's Party.
1917—1920
Pauline Adams serves as president of the Norfolk branch of the National Woman's Party.
April 1917
The Women's Home Guard is formed in Norfolk at the start of United States involvement in World War I.
Summer 1917
The Equal Suffrage League of Virginia joins the National American Woman Suffrage Association in condemning women who picket the White House on behalf of woman suffrage.
September 4, 1917
Suffragist Pauline Adams is one of thirteen picketers arrested for "flaunting their banners" in front of President Woodrow Wilson's reviewing stand before a selective service parade.
February 9, 1919
Pauline Adams is arrested during a suffrage march on the White House but is released.
August 1920
Virginia women gain the right to vote after the Nineteenth Amendment to the U.S. Constitution becomes law.
1921
Pauline Adams passes the bar exam to become the second woman lawyer in Norfolk.
November 1923
Pauline Adams campaigns for Sarah Lee Fain, one of the first two women elected to the House of Delegates.
September 10, 1957
Pauline Adams dies of myocardial failure. She is buried in Elmwood Cemetery in Norfolk.
FURTHER READING
CITE THIS ENTRY