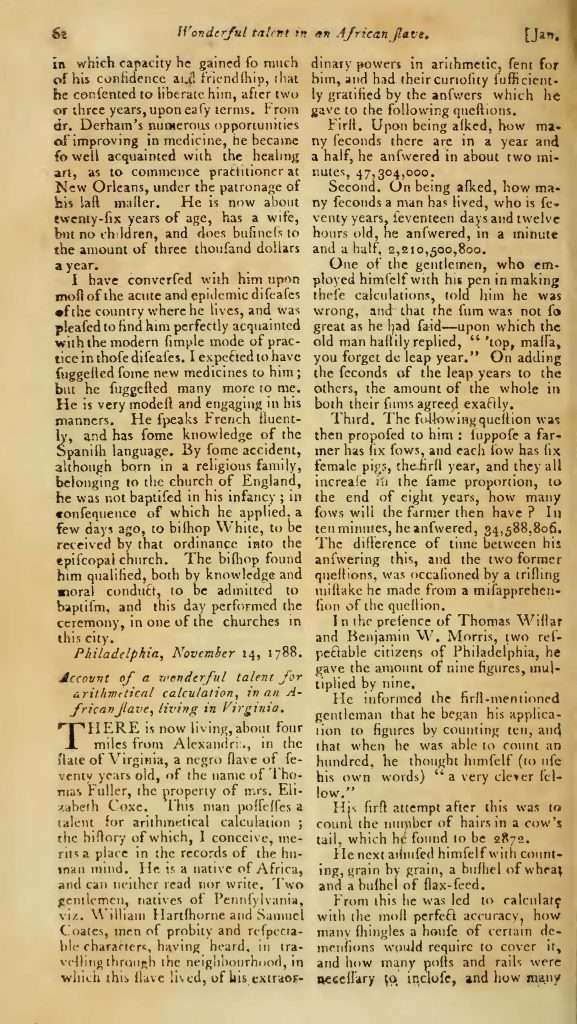 Account of a wonderful talent for arithmetical calculation, in an African slave living in Virginia.

THERE is now living, about four miles from Alexandria, in the state of Virginia, a negro slave of seventy years old, of the name of Thomas Fuller, the property of mrs. Elizabeth Coxe. This man possesses a talent for arithmetical calculation; the history of which, I conceive, merits a place in the records of the human mind. He is a native of Africa, and can neither read nor write. Two gentlemen, natives of Pennsylvania, viz. William Hartshorne and Samuel Coates, men of probity and respectable characters, having heard, in travelling through the neighbourhood, in which this slave lived, of his extraordinary powers in arithmetic, sent for him, and had their curiosity sufficiently gratified by the answers which he gave to the following questions.

Second. On being asked, how many seconds a man has lived, who is seventy years, seventeen days and twelve hours old, he answered, in a minute and a half, 2,210,500,800.

One of the gentlemen, who employed himself with his pen in making these calculations, told him he was wrong, and that the sum was not so great as he had said—upon which the old man hastily replied, “‘top, massa, you forget de leap year.” On adding the seconds of the leap years to the others, the amount fo the whole in both their sums agreed exactly.

Third. The following question was then proposed to him: suppose a farmer has six sows, and each sow has six female pigs, the first year, and they all increase in the same proportion, to the end of eight years, how many sows will the farmer then have? In ten minutes, he answered, 34,588,806. The difference of time between his answering this, and the two former questions, was occasioned by a trifling mistake he made from a misapprehension of the question.

In the presence of Thomas Wislar and Benjamin W. Morris, two respectable citizens of Philadelphia, he gave the amount of nine figures, multiplied by nine.

He informed the first-mentioned gentleman that he began his application to figures by counting ten, and that when he was able to count an hundred, he thought himself (to use his own words) “a very clever fellow.”

His first attempt after this was to count the number of hairs in a cow’s tail, which he found to be 2872.

He next amused himself with counting, grain by grain, a bushel of wheat and a bushel of flax-seed.

From this he was led to calculate with the most perfect accuracy, how many shingles a house of certain dimensions would require to cover it, and how many posts and rails were necessary to inclose, and how many 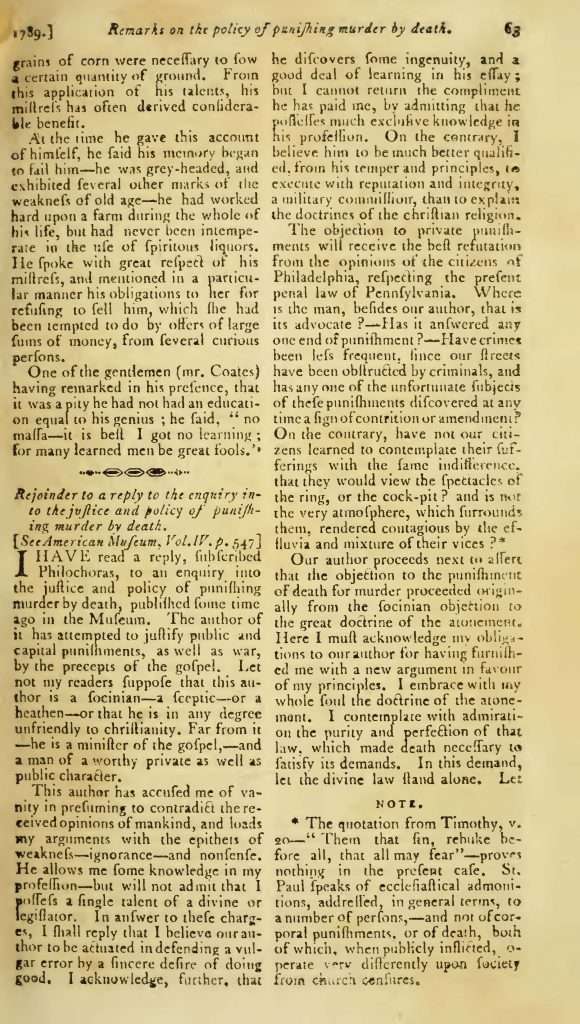 grans of corn were necessary to sow a certain quantity of ground. From this application of his talents, his mistress has often derived considerable, benefit.

At the time he gave this account of himself, he said his memory began to fail him—he was grey-headed, and exhibited several other marks of the weakness of old age—he had worked hard upon a farm during the whole of his life, but had never been intemperate in the use of spirituous liquors. He spoke with great respect of his mistress, and mentioned in a particular manner his obligations to her for refusing to sell him, which she had been tempted to do by offers of large sums of money, from several curious persons.

One of the gentlemen (mr. Coates) having remarked in his presence, that it was a pity he had not had an education on equal to his genius; he said, “no massa—it is best I got no learning; for many learned men be great fools.”